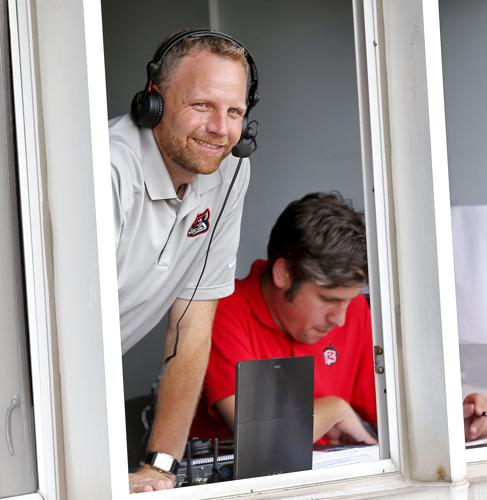 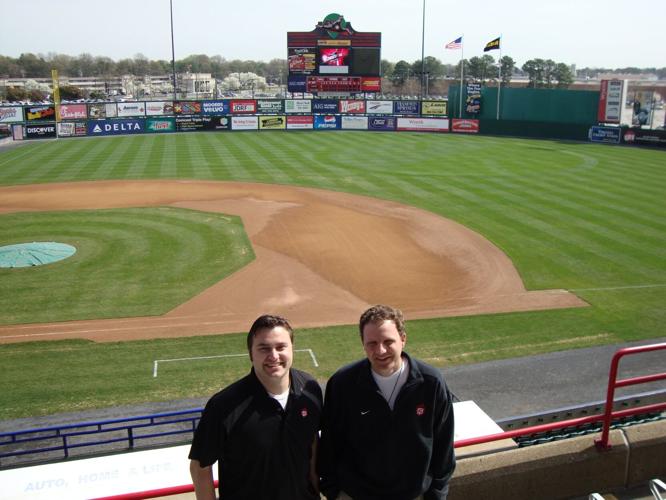 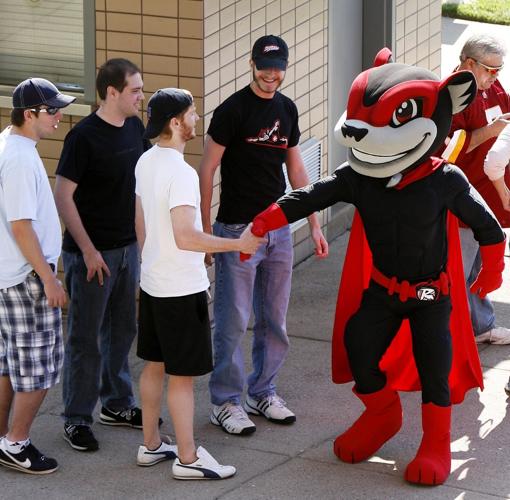 Opening night of the Richmond Flying Squirrels at The Diamond April 15, 2010. 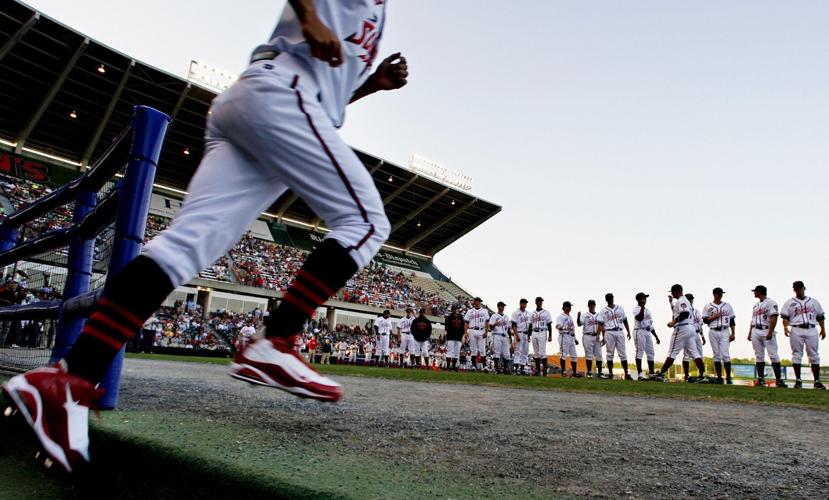 Flying Squirrels players took the field for the team’s first-ever home game at The Diamond on April 15, 2010.

Umpires, Chris Hamner,Jordan Ferrell, Cory Hinga and managers, Steve Roadcap of Reading and Andy Skeels of Richmond meet during the home-opener of the Richmond Flying Squirrels at The Diamond in Richmond VA Thurs. April 15, 2010. 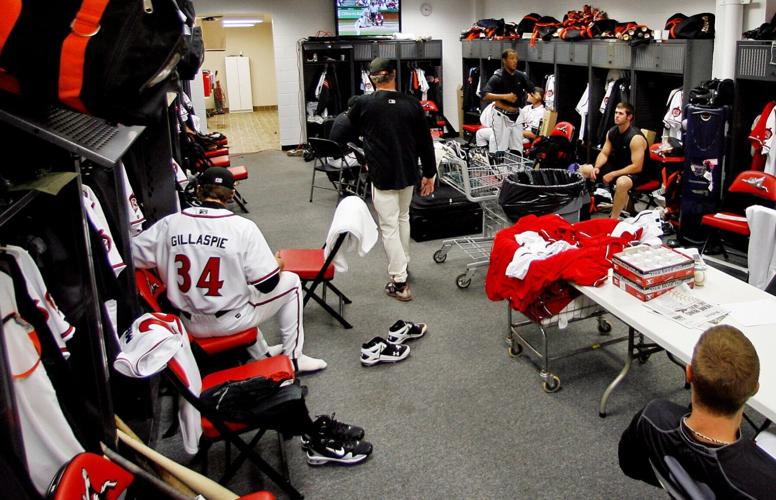 Members of the Richmond Flying Squirrels in the clubhouse prior to the home-opener at The Diamond in Richmond VA Thurs. April 15, 2010. 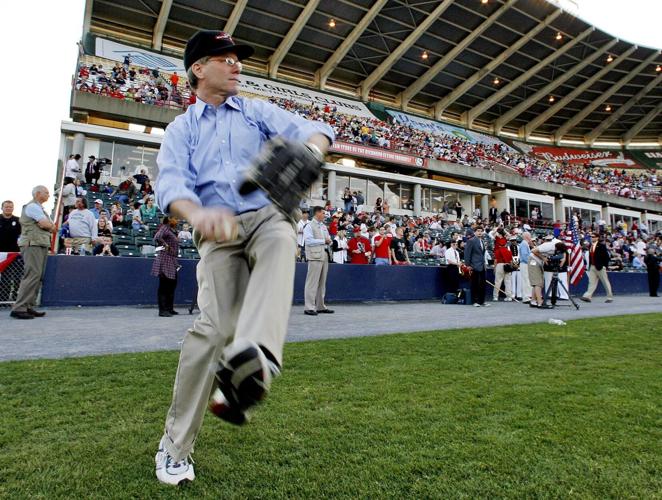 Gov. Bob McDonnell warmed up for his first pitch before the Flying Squirrels’ debut at The Diamond. 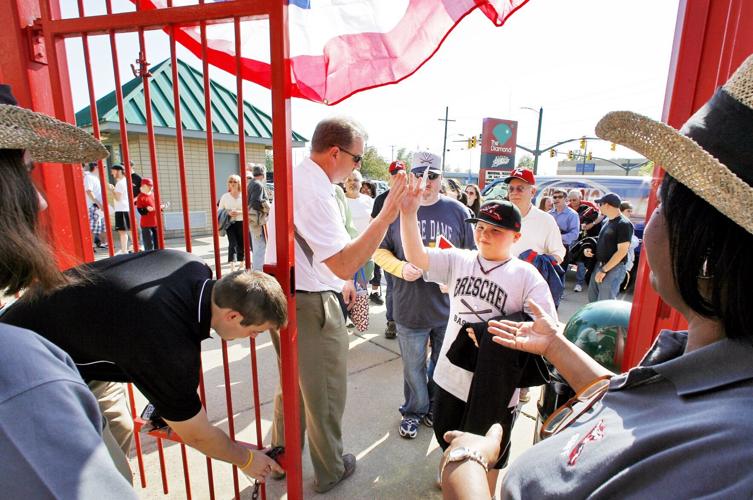 Todd “Parney” Parnell gave a high-five to Cody Breschel, an 11-year-old from Powhatan, at the home debut of the Flying Squirrels in 2010. Breschel was the first fan to enter through the “Squirrely Gates.”

On April 12th, 2010, I stood on the right side of the infield dirt at The Diamond. The sun was shining down from a perfect spring sky, and I watched as Richmonders filed back into a ballpark that had been left rotting less than two years before. It was about an hour until first pitch of the inaugural game for the Richmond Flying Squirrels and I had two thoughts: ‘This is going to be something truly special,’ and ‘How the heck did we manage to get here?’

As I reflect on it now, the Squirrels are preparing to embark on their 13th season representing the RVA. Their success in this community today seems preordained, but in actuality we went on a magical mystery ride of a lead-up that needed every ounce of help, skill and luck that we could get.

We had all come to Richmond seeking participation in something special. We were of varying ages and experience levels, but we all had one thing common. We believed in the vision of what could be created here. That vision was laid out by Lou DiBella, Chuck Domino, Todd “Parney” Parnell and Bill Papierniak.

We were fond of saying and/or yelling depending on where our activities had taken us; “Baseball is BACK!” Have Funn, Go Nutz wouldn’t come until weeks later, and only as a result of the good fortune that our office phone number happened to spell out F-U-N-N with two N’s. “Why two N’s? Because we’re going to have so much FUNN, one N isn’t enough,” Parney bellowed. And so it became a mantra. There are so many stories I can tell you, and some that I can’t, about things like that. Spontaneous brilliance. Life is beautiful that way sometimes when you have an open mind.

When we got here in September of 2009, we had literally nothing other than that vision. We were all pulled for a particular reason from the minor league trees of one of our leaders. Myself from Parney’s branch, my original broadcast partner Anthony Oppermann from Domino’s and a host of talented people from Papierniak’s. We considered ourselves an all-star team of minor league vagabonds and we conducted ourselves as such. We needed that swagger.

While we all shared one office in the very beginning, Oppermann famously answered one call, “yes ma’am, that’s correct. We’re going to make the old girl (The Diamond) shine again!” We were a lot of Tom White (director of operations) spread liquid nail away from getting there.

We were a work hard and play hard crew, and we had to be. The timeline to opening day was short and the challenges were many. I vividly remember being led on a power-washing brigade by White and Steve Ruckman (head groundskeeper). Curiously, I don’t ever remember doubting that we would get there. That didn’t mean there wasn’t stress — a lot of stress. The reason I didn’t doubt it was Parney. As you know by now, he is a one-of-a-kind dynamo of energy, emotion and a never-ending passion for community. He wasn’t going to let us fail. Which is good, because we would have without him.

But, The Diamond was a mess. Left behind by a franchise that didn’t just leave, they left angry. Or so it seemed to us. Our initial meetings were held on folding tables in a clubhouse with shag carpeting and nothing else. Eventually I would remake the control room where audio and video would originate for games but first that meant an audio company untangling miles of wires, none of which we knew went to what.

“Just chop it down!” I fondly remember proclaiming after getting so frustrated with the old scoreboard. We didn’t, but we did successfully do an operation on that scoreboard so you could read the numbers again.

When we had the Daktronics video board installed, VCU outfielder Joe Van Meter whacked a panel out of it with a majestic home run a day before we’d had the chance to put up the protective netting.

So darn windy that day.

“Uh yeah, I’ve got a problem with the new board,” I said to the Daktronics rep. “What’s that?” he replied. “Well, it got struck by a ball and one of the panels is out.” “What’s that, it was installed incorrectly?” It took him asking that three times until I caught on to the fact that we has trying to help me.

The beauty of the Squirrels was that it was an absolute blank canvas being painted on by a bunch of leaders that didn’t much care what convention said. Sure, there was some kickback to our intentionally zany antics, but our big four leaders never wavered from the endgame. To change the game and revitalize a community’s passion for baseball, or as Parney would say “re-enter the memory-making business.”

In a dizzying few months, we became the newly-minted Flying Squirrels, chose team colors, had logos created and brought Nutzy to life. While our corporate sales team led by Ben Terry worked furiously to bring sponsors into the fold, our ticket team let by Brendon Porter nearly glued the phone to their ears to hawk season tickets. Our food guys, Justin Rink and Clint Chamberlain, held arguably the longest day of all, a job fair that was attended by thousands — all of whom received an interview. It started at 9 a.m. and ended at 1 a.m. And, oh yeah, it rained that day so everyone was crammed into the tunnel underneath the ballpark. But we got a staff in place that led to iconic Vendortainers including “The King,” “Peter Pan” and, my personal favorite, “Super Cold.”

Ben Rothrock orchestrated our merchandise launch in what would become one of the most successful merchandise brands in minor league baseball. And we remade the bar in what had previously been the ballpark restaurant. The Speakeasy.

Christina Shisler (director of promotions) created on-field promotions from thin air. We hired Jimmy Barrett (“The Voice of God”) as our P.A. announcer. The Squirrels took the field for their first six seasons to “You’re the Best Around” by Joe Esposito because it’s the montage fight scene song in “Karate Kid,” and we all liked that movie. Just building a culture one piece at a time.

I’m forgetting some people and some things, but the general origin of the Squirrels is a belief in this community. That it was in fact starved for baseball and a unique brand of entertainment. For 12 years, Parney has hand-delivered that message door-to-door, never wavering in his stewardship of the brand. Most of the OGs as we called ourselves have moved on to other things, but the spirit of the beginning lingers in those that remain (Here’s looking at you Joe T). Countless new traditions have been created through the years, and obviously the memories and relationships fostered at the ballpark are innumerable.

“Being a Squirrel is not a job … it is a way of life,” Parney always says. And that is correct. We’re all still close and The Diamond has a way of pulling us all back together from time-to-time. Catch one us out there this season and we will fill you in on the rest over some Squirrely fries and a cold one.

The vision became reality, even without to this point a new ballpark. But we will get there, and when we do the essence of being a Squirrel will move right in along with Parney and the gang.

I am no longer the kid that stood on the infield dirt staring in awe at the creation of something out of nothing back in 2010. Many of you were probably kids yourself on that night as well. I hope we gave you a good show. I am, however, back in Richmond with my wife, Renee, and I am looking forward to new memories being made this season.

Lohmann: Farewell to Glenwood: I never played it well, but I sure did enjoy it

The property has been sold with plans for it to become a housing development. The last day of play is June 30.

The red smoke rose in plumes above a raucous Section O.

Scholar-Athlete of the Year finalists announced

The 20 were chosen by a nine-member panel representing The Times-Dispatch and Sports Backers from a pool of 93 seniors who were nominated by their school or were Scholar-Athlete of the Month winners.

The Richmond Flying Squirrels were defeated 12-1 by Harrisburg on Sunday in the finale of a week-long series.

Of the 12 companies currently taking sports bets in the state, only five of them have paid any taxes since launching.

"There's no greater feeling than knowing you made a difference in somebody's life."

Opening night of the Richmond Flying Squirrels at The Diamond April 15, 2010.

Flying Squirrels players took the field for the team’s first-ever home game at The Diamond on April 15, 2010.

Umpires, Chris Hamner,Jordan Ferrell, Cory Hinga and managers, Steve Roadcap of Reading and Andy Skeels of Richmond meet during the home-opener of the Richmond Flying Squirrels at The Diamond in Richmond VA Thurs. April 15, 2010.

Members of the Richmond Flying Squirrels in the clubhouse prior to the home-opener at The Diamond in Richmond VA Thurs. April 15, 2010.

Gov. Bob McDonnell warmed up for his first pitch before the Flying Squirrels’ debut at The Diamond.

Todd “Parney” Parnell gave a high-five to Cody Breschel, an 11-year-old from Powhatan, at the home debut of the Flying Squirrels in 2010. Breschel was the first fan to enter through the “Squirrely Gates.” 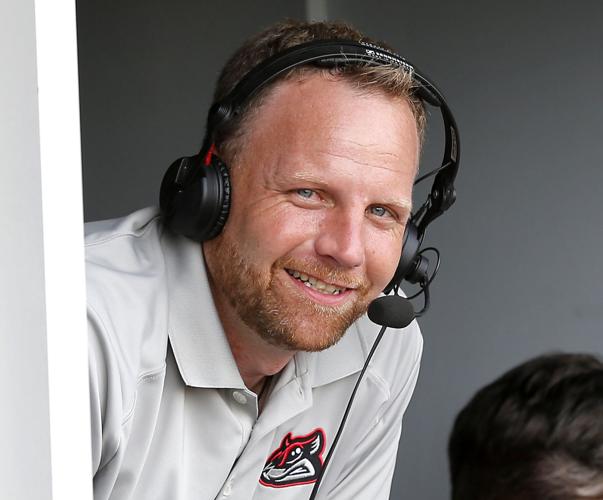