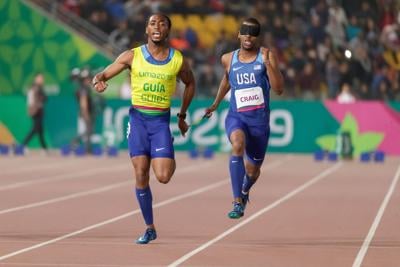 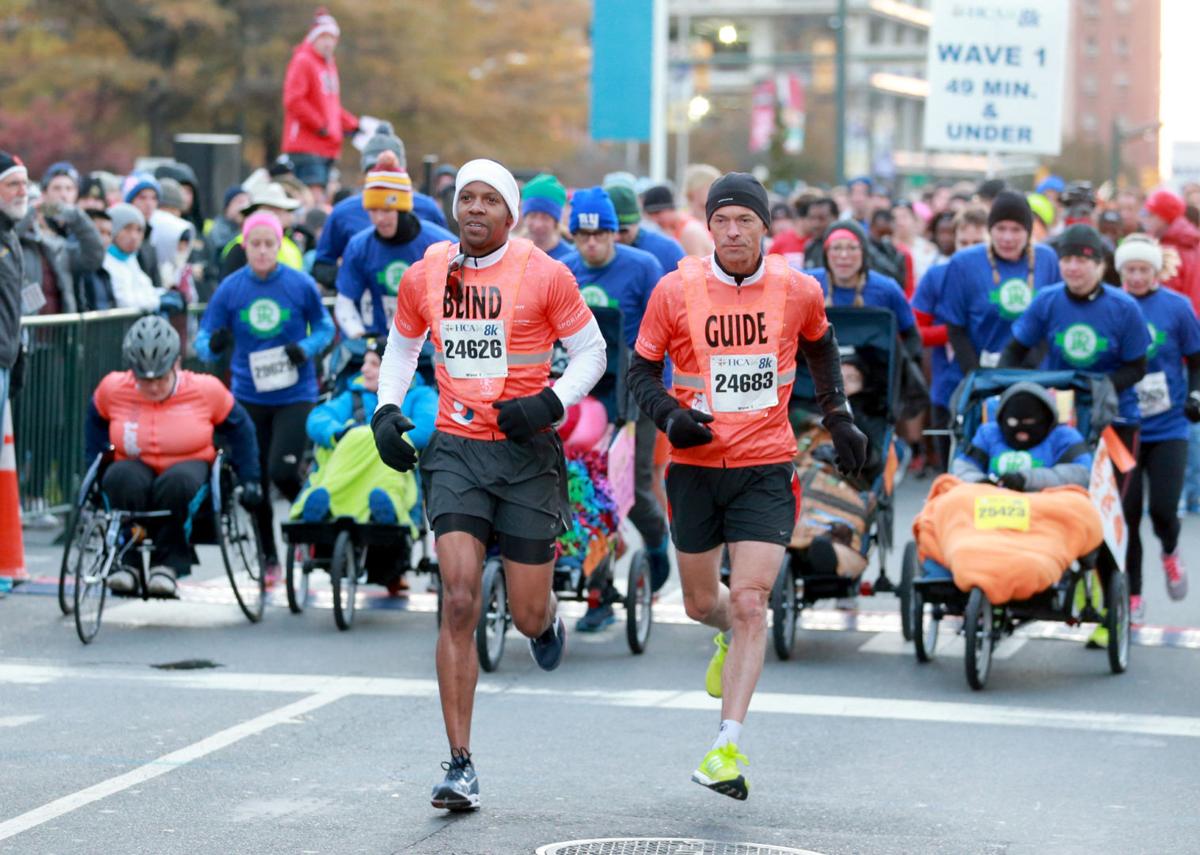 Antoine Craig, center left, who is a visually-impaired runner, runs with Karl Cover, his guide, during HCA Virginia 8K in Richmond on Saturday, November 15, 2014. 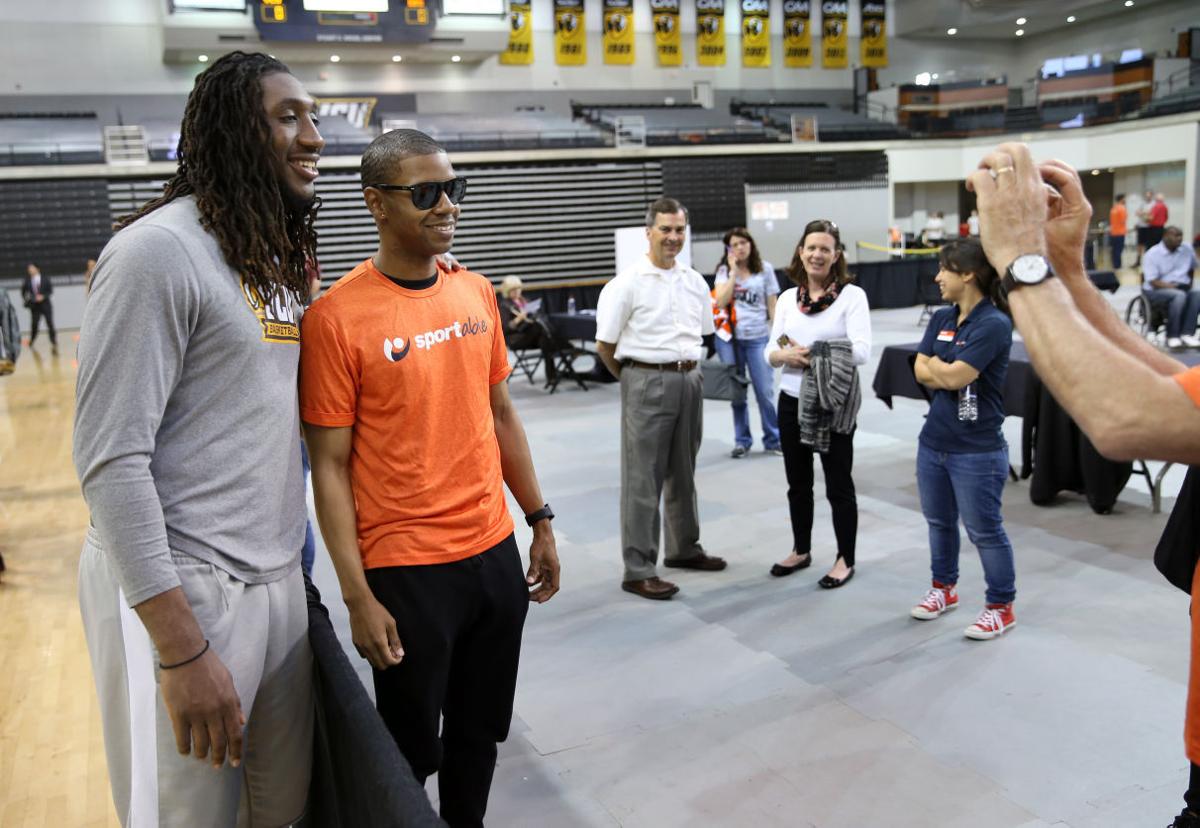 VCU basketball player Mo Alie-Cox, left, is posed with Antoine Craig, a Sportable athlete, for a photo at VCU Siegel Center in Richmond on Friday, April 15, 2016. 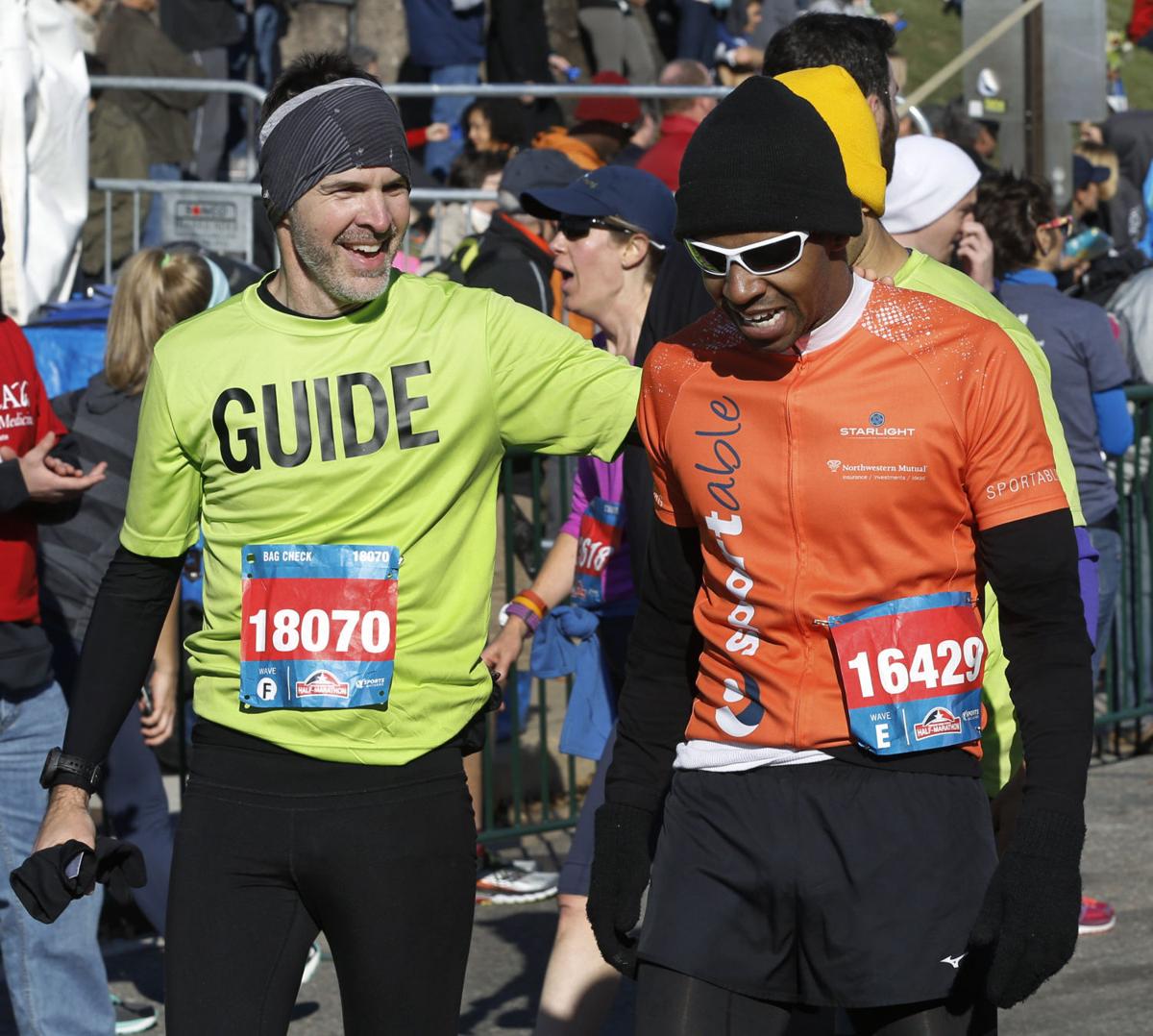 Antoine Craig (right) ran the Richmond Half Marathon in 2015 with help from running guide Tim Hamnett. Craig said he’s received a ton of support from the local running community, which is like an “extended family” for him. 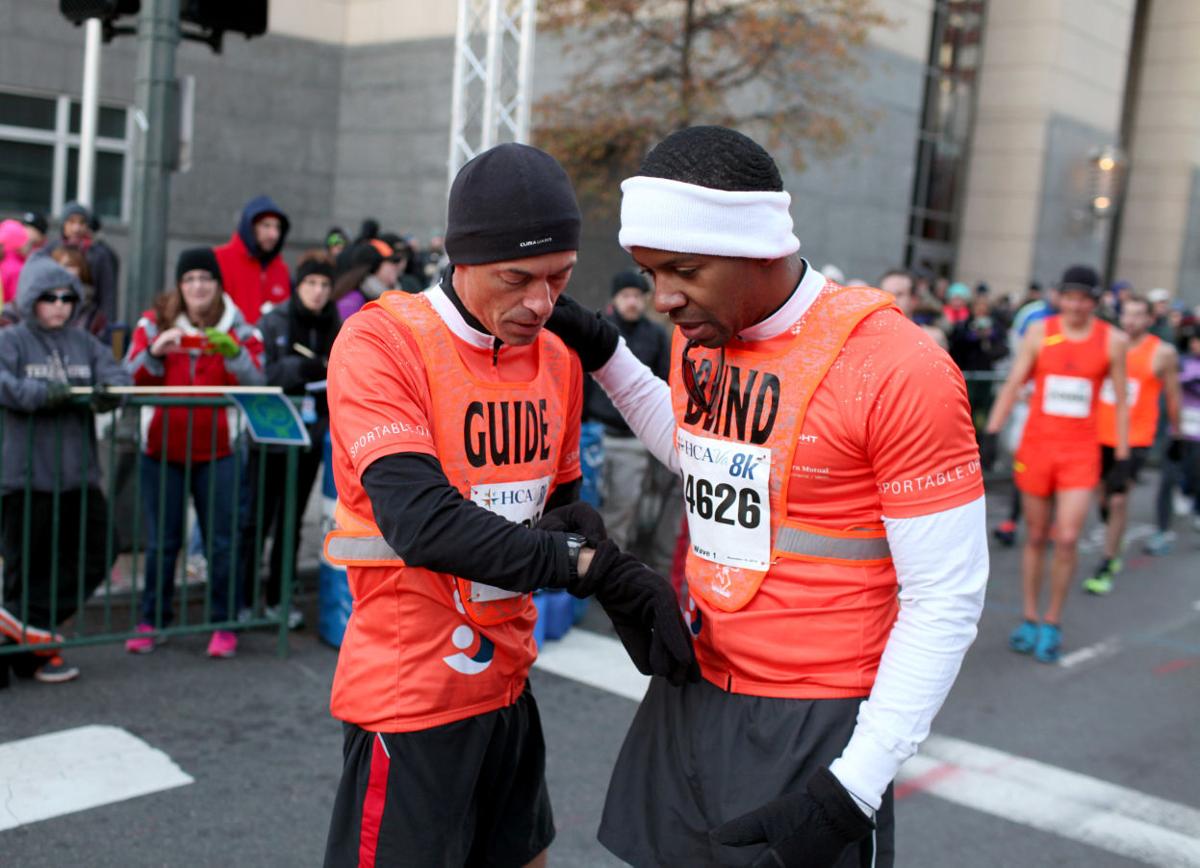 When Antoine Craig crosses the finish line, he has what everybody else has. And he’s winning, no matter what place he’s in.

A visually impaired runner, VCU graduate and Richmond resident, Craig is set to race at the 2020 U.S. Paralympic Team Trials for track and field June 17-20 in Minneapolis. There, he hopes to qualify in the 100-meter dash for the Tokyo 2020 Paralympic Games, scheduled for Aug. 24 to Sept. 5.

After gradually losing his vision due to a rare degenerative impairment, running has become a foundational component of Craig’s life and mental well-being.

“You just feel so proud of yourself when you pass the finish line because you’ve been through so much,” he said.

“You don’t think about what you’re not, what you’re lacking, none of that stuff matters. Because in that moment, you have what everybody else has. You’re just relying on your heart, your willpower, your determination.”

Craig, 39, started to lose his eyesight in 2010 after having issues seeing at night when he was younger. He was born with retinitis pigmentosa, a group of genetic disorders that involve a breakdown and loss of cells in the retina. But he wasn’t aware of his condition until undergoing years worth of tests and seeing a specialist.

An imprecise emotion worse than fear gripped Craig in those intervening years, he said. His vision was deteriorating and he didn’t know why. Born in Cleveland, Craig went to high school in Atlanta and was living in Georgia at the time. His mother left to take a job in Virginia in the late 2000s, while Craig was still searching for a diagnosis. As his condition worsened, Craig moved out of his apartment, sold his car, packed his life into a rental and drove to Richmond with his mother.

He arrived here in 2010, and saw a specialist who finally put a name to his condition. A period of “trying to figure out what the hell (he) was going to do” ensued.

“Once you lose your vision, your whole way of life is uprooted,” Craig said.

His mindset had always been to seek employment after high school, and Craig hadn’t really considered college until a friend suggested he apply to VCU.

He got in, and so began his running journey.

Another friend on campus told Craig she’d seen people running tied together and demonstrated for him at Cary Street Gym.

They started running shoulder to shoulder on the upstairs track surrounding the basketball courts, and Craig began to experience the liberating emotion which to him has become synonymous with the sport.

“When you go blind, you lose so much mobility,” he said.

“We have so much struggle just walking, running is out of the question, we don’t even think about it. So I was super excited just to have gotten to that point.”

After passing a sign advertising the Broad Street Mile, Craig was able to link up with Sportable, a Richmond-based “adaptive sports club with a mission of creating opportunities and transforming lives of those with physical disabilities and visual impairments through sport.” They’ve helped him find guides for races such as the HCA Virginia 8K. That Broad Street Mile was the first official race he ran, and Craig remembers realizing he had a talent for the sport after clocking a 7:41 in his very first mile.

Then 8Ks turned into 10Ks, and eventually Craig ran the Richmond Half Marathon before deciding to try out sprints. This was in 2016, and in hindsight, the timing of his transition appears fateful. The 2016 Paralympic Games in Rio de Janeiro featured newly expanded television coverage, and Craig experienced Team USA’s David Brown winning gold in the men’s T11 100 meters.

“Hearing it and having it described, I was like, ‘Wait a minute, these are blind people running this fast,’” he said. “I was blown away. So after that I was like, ‘Yeah, I definitely want to do this.’”

Craig’s first big national race was the 2017 Desert Challenge Games, where he qualified for the U.S. Paralympics Track & Field National Championships. He took silver in the 200 meters at nationals that year, and his career has been ascending since. His accomplishments include gold (400), silver (200) and bronze (100) in the 2018 Arizona Grand Prix, and a gold medal at that meet in 2019 for the 200.

He graduated from VCU in 2016 with a B.A. in psychology, and is working on his master’s now with the goal of becoming a sports psychologist.

Craig mentioned the recently publicized battle with depression and anxiety experienced by tennis star Naomi Osaka and said he hopes to help athletes navigate such struggles in his professional life.

“In a sense, I’m using my track and field career to help me better understand the challenges of being an athlete so when I do move into that space, I can relate,” Craig said.

“People don’t really think about athletes and their mental health. They think they’re just these tough soldiers, but no, it’s a really difficult thing to do what athletes do.”

He’s also got a YouTube channel, Legendary Untold, which he uses to share his experience as a blind athlete. Craig hopes his story can inspire others facing similar challenges. While at VCU, he became accustomed to what he calls “Antoine how” questions from other visually impaired students — “How are you laughing?”; “How do you get dressed?”; and “How do you make it from this place to that place?” were among the inquiries.

“I started to realize that’s, maybe not my purpose, but a big responsibility for me that I’ve taken on,” he said. “I try to leave as much as I can for the next person who is coming up who may have just lost their vision and don’t know what they’re capable of, don’t know what’s possible for them.”

Craig sometimes struggles to meet the financial demands of the travel required to compete at the international level. The Richmond running community has proved an immense source of support, he said. People sometimes recognize and cheer him on at races, and many Richmonders have become “extended family” to him.

“I’ve been able to get so many resources just from the people here,” he said. “There’s just so many people in the community helping me out.”

Despite his success, Craig considered retiring during the past year after the Paralympics were postponed because of the pandemic. He and other Paralympic athletes were left with very little resources, he said.

So for training, Craig took a pair of Bluetooth speakers out to a football field in Short Pump. He set them 30 meters apart, running sprints with sound issuing from the speakers acting as his guide, all the while focusing on the dream of crossing the finish line in Tokyo.

“We go through so much stuff, there’s so much disappointment and so much loss. You lose your vision, you lose friends, the ability to drive. It just feels to good to be able to win,” Craig said.

“When you win, you cherish that, and it just fills your tank to take on the next challenge. So I think it’s important for us to see things through. For me to be able to get there (Tokyo) and accomplish that goal and make it, that would be a win for me, no matter if I medal or not. That would be a win.”

VCU Health Richmond Marathon back to traditional format on Nov. 13

The VCU Health Richmond Marathon will go back to its traditional course (starting and finishing downtown) and format (one day, in person) this…

Jerry Lindquist's Sports Memories: Leigh Cowlishaw has been a constant in the Richmond soccer scene

Leigh Cowlishaw did not come to America chasing a dream. Quite the opposite.

White House press secretary Jen Psaki, who graduated from William & Mary, was one of many Twitter and Facebook users to repost the photo, which continues to resonate.

Jerry Lindquist's Sports Memories: A grab bag of memories on a holiday weekend

The memory man strikes again with an assortment of stuff. This is Volume 54: “I Never Had One Complaint.” In no particular order … put ‘em in …

Outdoors with Ken Perrotte: Fishing with an old friend is just what the doctor ordered

Sometimes, people aren’t the best about keeping up with old friends and coworkers. That includes the folks we often dubbed “battle buddies” wh…

Antoine Craig, center left, who is a visually-impaired runner, runs with Karl Cover, his guide, during HCA Virginia 8K in Richmond on Saturday, November 15, 2014.

VCU basketball player Mo Alie-Cox, left, is posed with Antoine Craig, a Sportable athlete, for a photo at VCU Siegel Center in Richmond on Friday, April 15, 2016.

Antoine Craig (right) ran the Richmond Half Marathon in 2015 with help from running guide Tim Hamnett. Craig said he’s received a ton of support from the local running community, which is like an “extended family” for him.