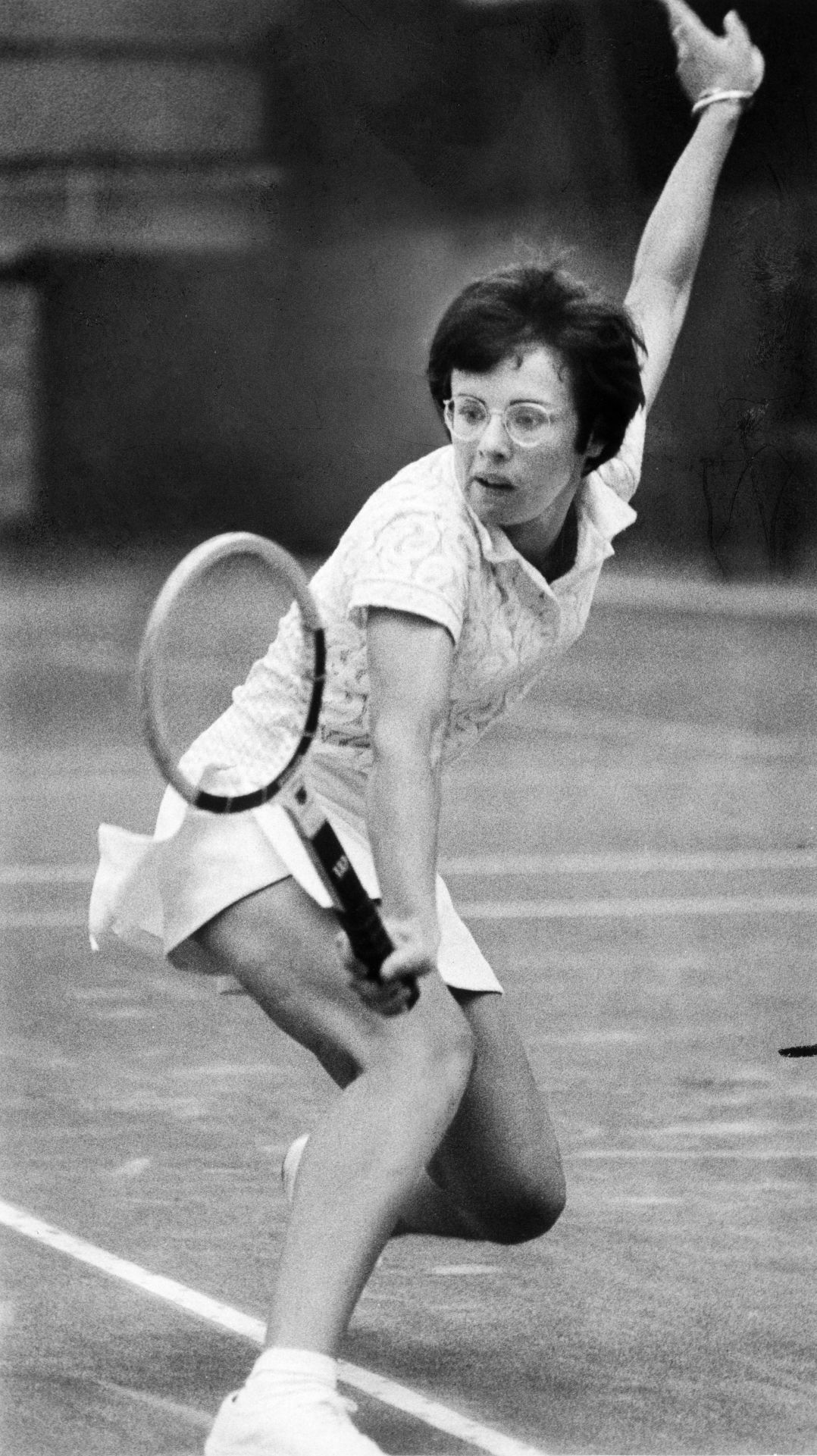 In November 1970, tennis star Billie Jean King defeated Nancy Richey 6-3, 6-3 in the singles final of the Virginia Slims Invitational tournament at the Westwood Racquet Club in Richmond. King also won the doubles title with partner Rosie Casals and collected a total of $2,800 in prize money. At the time, King already had won at Wimbledon three times. 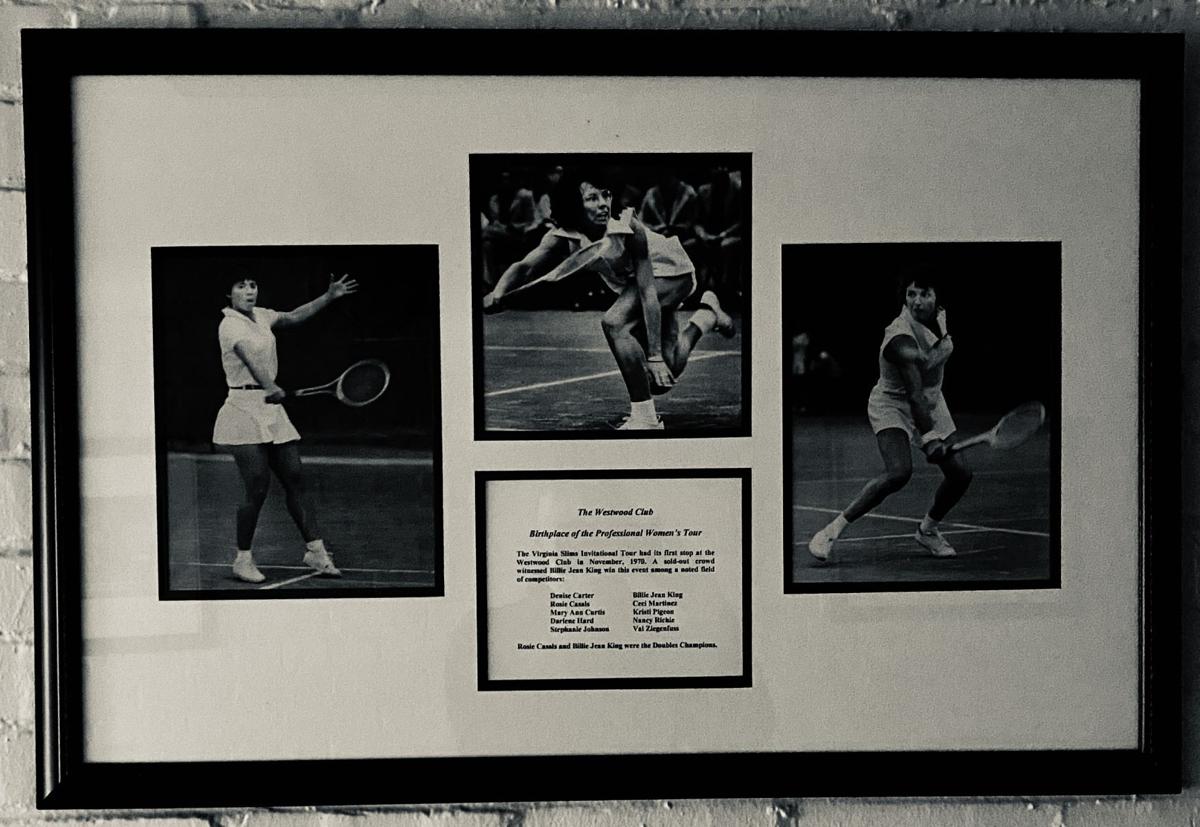 Plaque at the Westwood Club 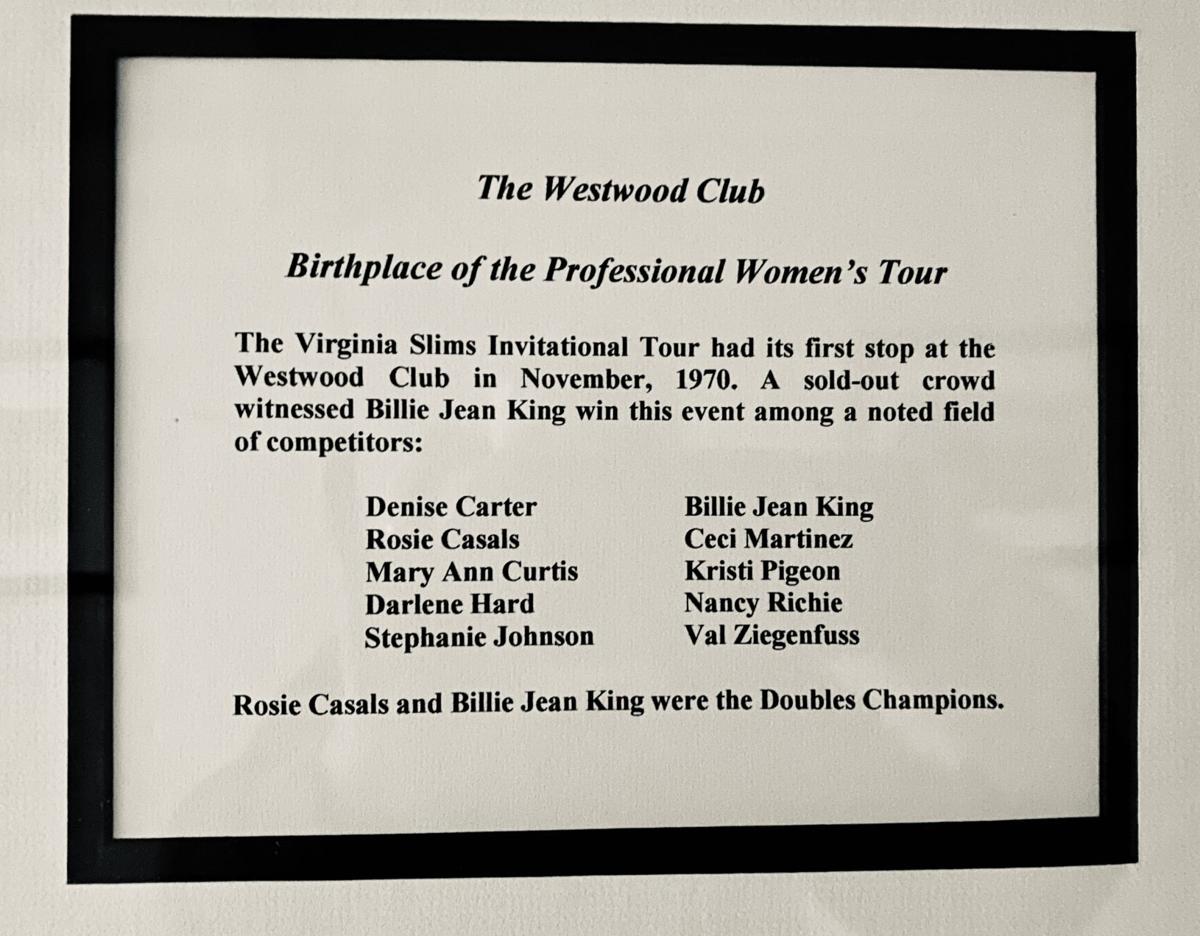 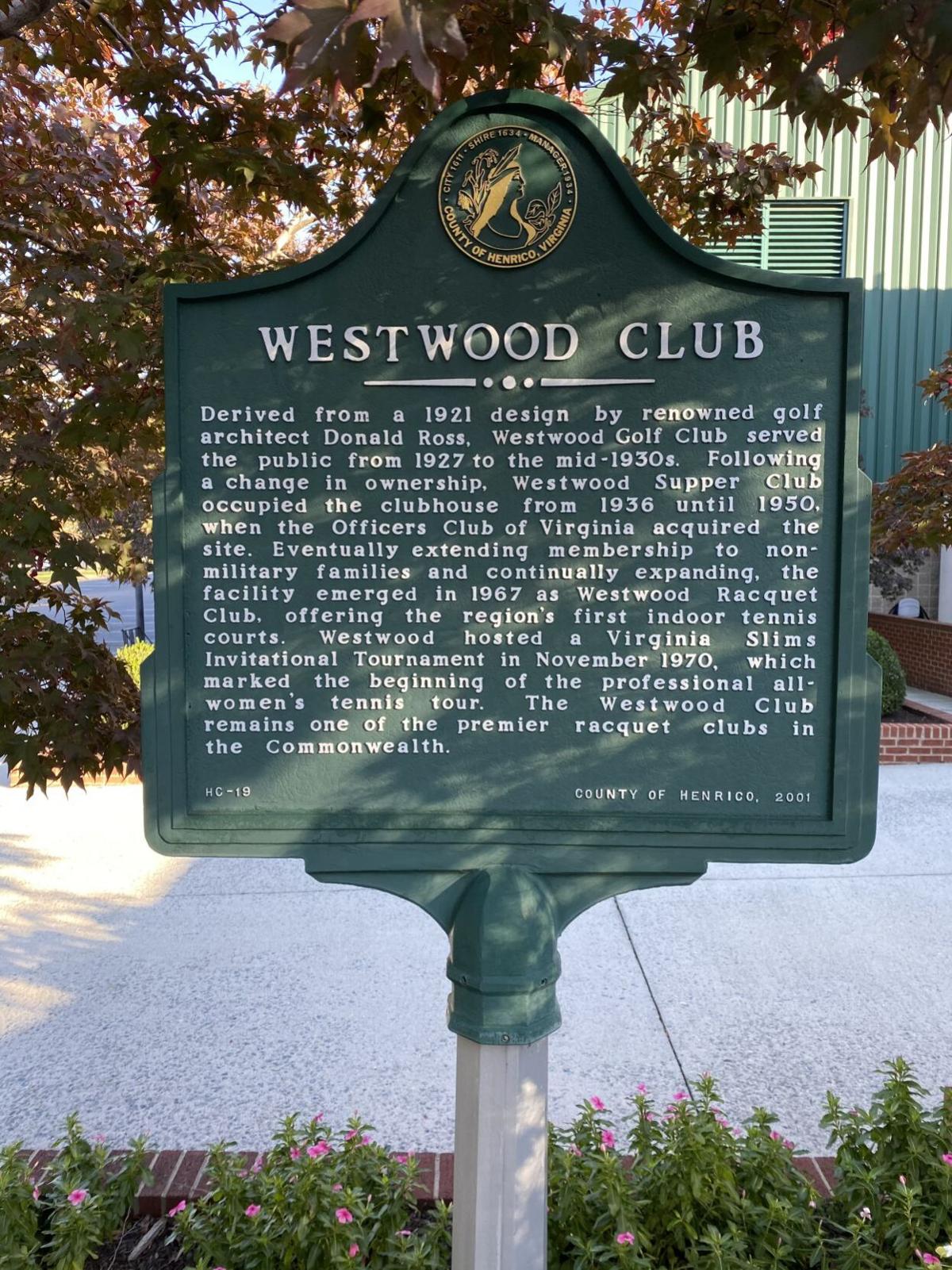 In the fall of 1970, Dorothy Chewning was in the process of putting together the field for the Westwood Ladies Invitational, a successful event that had drawn big crowds to the Westwood Racquet Club in Richmond’s West End.

That tournament included the likes of Nancy Richey, Maria Bueno, Wendy Overton and Judy Dalton during the late 1960s.

Little did the veteran organizer of women’s events in the city and state realize what was in store for her tourney on this occasion.

Led by Billie Jean King, who had burst onto the scene when she won Wimbledon in 1966, the women were seeking equal pay with the men — an unheard of idea in those days — and decided to form their own tour.

With the backing of Gladys Heldman, creator and owner of World Tennis magazine, nine players signed a pro contract for $1 each with Heldman, and instead of being the undercard of a tournament in Los Angeles with the men, took part in their own event in Houston.

That was in September, 1970, and for the record, it was won by Rosie Casals, who defeated Judy Dalton in the final. The total purse was $7,500 — part of which was supplied by Philip Morris’ new cigarette brand Virginia Slims — and Casals received a winner’s check for $1,600.

Because they boycotted the Los Angeles tournament and staged their renegade event, the nine women were suspended by the U.S. Lawn Tennis Association. That meant they couldn’t play in any sanctioned tournaments, including the majors like Wimbledon and the U.S Open.

“Certainly, we knew we were taking a big risk,” Casals, 72, said during a Zoom program in Richmond in August. “We were feuding with the USLTA. They had their own circuit. We were making them angry because we were defying them.

“You could certainly say we were risking our careers … because they were in a position to stop us from playing. On the other hand, I think we all felt it was so important to make the decision to move forward to fight them.

“We felt like we were not going to get what we wanted unless we did battle with them. A lot of us were young. We had been talking about this for three months and we were convinced that we made the right decision.”

In addition to Casals and Dalton, the other nine included King, Peaches Bartkowitz, Julie Heldman, Kerry Melville, Kristy Pigeon, Nancy Richey and Valerie Ziegenfuss. This “Original Nine” has been nominated for a place in the International Tennis Hall of Fame in 2021.

With the Richmond tournament now days away and needing its own sponsor, Chewning made a trip to New York to visit Joseph Cullman, CEO of Philip Morris, which manufactured many of its cigarettes in Richmond at the time.

“They evidently hit it off pretty well,” said Tom Chewning, 75, a nephew of Dorothy Chewning and an accomplished local player during the 1960s and ‘70s. “Dot was a smoker and she went into his office smoking. He was a smoker too.

“’You’ve got this [new] brand, Virginia Slims, that would fit perfectly with women. So you ought to do something.’”

With cigarette advertising banned from radio and TV in 1970, sponsorship of sports events became another way to hype products.

Chewning told Cullman that she and her volunteers could handle all the details and promotion for the tournament, set for the weekend of Nov. 5-8. Philip Morris just needed to put up the prize money and perhaps pay some of the expenses for the players to come.

“He didn’t give her an answer right away,” said Tom Chewning, “But in about a week, he called and said, ‘We’ll do it.’”

So the first Virginia Slims Invitational of Richmond was born, and it featured King and Richey as the headliners. Others in the 10-player field included Casals, Pigeon, Ziegenfuss, Mary Ann Curtis, Darlene Hard, Stephanie DeFina Johnson, Denise Carter and Ceci Martinez.

King, who turns 77 later this month, won the inaugural event, beating Richey 6-3, 6-3, in the singles final on Westwood’s indoor clay courts and teamed with Casals to capture the doubles title. An estimated crowd of nearly 2,000 watched the matches.

“People enjoyed it at Westwood,” said Tom Chewning. “You couldn’t fit a lot of people in, but it was well-received. Cullman came down [from New York] and saw the way it had been embraced. So he said, ‘Yeah, we’ll keep [sponsoring the fledgling women’s tour].’”

The driving force behind the formation of a separate women’s tour was King, a feisty little all-court player from Long Beach, Calif.

“From 1968 to ’70, we had less and less places to compete,” said King, during an interview on Tennis Channel this summer. “[Promoters] were dropping women’s tournaments. We were making anywhere from eight to one ratio [compared to men] in prize money.

“The men were telling us to quit and go take care of our husbands. It was really a tough time.”

With the success of the Houston and Richmond tournaments, Philip Morris put its considerable weight and sponsorship behind the first Virginia Slims circuit. It took off in 1971, with its rallying cry of “You’ve Come a Long Way Baby” for the new Virginia Slims cigarette.

The circuit included 19 tournaments and was dominated by King, who won $117,000 in prize money, becoming the first American, male or female, to cross the $100,000 mark. She also added the U.S. Open to her haul that year.

The Virginia Slims Invitational stopped in Richmond two more times. It was moved to March in 1972, and King was the winner. A year later, Margaret Court had joined the tour and the Australian powered through the field.

“They were always our favorite stop,” said Casals of the Richmonders. “All the girls really wanted to stop in Richmond. It was one of the best-run tournaments, no matter where we went. And they really knew their tennis there, with [Richmond native] Arthur Ashe being one of the very best.”

Lou Einwick, director of the men’s indoor pro tournament at the Arena and later the Coliseum, said Dorothy Chewning deserved much of the credit for the tournament coming together because of her organizational abilities.

“Dorothy had vast organizational skills,” said Einwick, 84. “She really did. She became the ticket chairman for the men’s tournament for a long time. And she was obviously one of the reasons Heldman felt she could hold the tournament here.

“She was devoted to three things. One was Tom Chewning, her nephew. The second was the University of North Carolina [she and Dean Smith were buddies], and the third thing was women’s tennis. Dorothy supported those three things all the time. And she supported our tournament until she passed on.”

Casals and King became close friends with and stayed with Westwood members Jack and Barbara Clark during the tournaments here. After their playing days, they would still come to Richmond to visit with the Clarks.

“Jack was a fun guy to be around,” said Tom Chewning, “and they always had a good time with the Clarks.”

King, winner of 12 major singles titles and 39 Grand Slams overall, was in Richmond in September to help with the sale of the Clark’s Windsor Farms home when Barbara Clark moved to an assisted living facility. Jack Clark had passed away in 2013.

Unfortunately for Richmond tennis fans, the Virginia Slims tour outgrew the smaller venues like Westwood and opted for larger arenas in bigger cities. Since its humble beginnings, it has grown to 55 events in 29 countries, and last year gave out $179 million in prize money.

(Part of what transitioned from the Virginia Slims tour to the Women’s Tennis Association circuit came to the Robins Center from 1979-83, and featured two of the best players in the world in Martina Navratilova and Tracy Austin.)

In its most recent compilation of the richest female athletes for 2020, Forbes magazine lists tennis players as nine of the top 10, led by Naomi Osaka with $37.4 million. That includes both prize money and endorsements.

Dorothy Chewning didn’t live to see much of the women’s success, dying in 1980 at age 66. Although she didn’t play tennis herself, she really loved the game and enjoyed putting together tournaments that appealed to both casual and avid fans.

“When I started playing tennis, she would come to all the matches,” said Tom Chewning. “She just liked the sport. She thought it was a beautiful game to watch. She thought the women, in particular, were graceful.

“She just thought that people would enjoy watching, and I think they did.

“This wouldn’t have happened without her. It wasn’t as heralded as the men’s tournament [at the Arena and later the Coliseum], but it was kind of a pioneering thing for professional tennis in some ways in Richmond and gave us some credibility in the tennis world.”

It has been 50 years since the Virginia Slims Invitational set up shop in Richmond, thanks mostly to the work of Dorothy Chewning, whose dream of having the top women’s players in the world at Westwood coincided with the beginning of the first women’s pro tour.

“I think it was ahead of its time, frankly,” said Tom Chewning. “It was ahead of when tennis really took off as a spectator sport.”

CBS and ESPN reporters, among others, ran with the incorrect news shortly after the scheduled time on Friday afternoon.

The virus arrived in the southwestern U.S. in April 2020 and has spread as far east as central Texas and the Colorado/Kansas border.

Once again the memory man takes the easy way out with a bunch of short-term recall short takes. Hang on because he goes all over the place inc…

To celebrate the awards, the Times-Dispatch is offering its lowest rate ever on digital subscriptions through May 16 - $1 for 6 months of unlimited access, which is available at Richmond.com.

Want to see red-hot San Francisco Giants prospect Heliot Ramos? It might be wise to head to The Diamond as soon as possible.

McElroy: It's great to be back at the ballpark

The Diamond might have only been at 30% capacity but it was a roar that not only stopped me in my tracks but one that left a lasting impression, especially for those who pondered about playing the game again over those 600 days.

Booker doesn’t remember the game, who the pitcher was or the opponent – and, the way he tells it, never bothered to ask.

The Richmond Region Tourism Foundation is announcing plans to celebrate the best of the area’s sports scene.

"When you lose somebody, you go to family," Garbett said. "And that's exactly what we've done. We've all come together."

In November 1970, tennis star Billie Jean King defeated Nancy Richey 6-3, 6-3 in the singles final of the Virginia Slims Invitational tournament at the Westwood Racquet Club in Richmond. King also won the doubles title with partner Rosie Casals and collected a total of $2,800 in prize money. At the time, King already had won at Wimbledon three times.

Plaque at the Westwood Club