TOKYO (AP) — Sweden didn't have to bunker down on defense against the Americans this time.

Stina Blackstenius scored a pair of goals and the Swedes stunned the United States at the Olympics with a 3-0 victory Wednesday in the women's soccer tournament.

The Americans, ranked No. 1 in the world and the favorites to win gold in Tokyo, were riding a 44-match unbeaten streak heading into the match. But Sweden, ranked No. 5, has been the U.S. team's nemesis of sorts in recent years. The Swedes bounced the Americans from the 2016 Rio de Janeiro Games in the quarterfinals, the earliest U.S. Olympic exit ever, by making a defensive stand.

This April, Sweden played the United States to a 1-1 draw in Stockholm, which snapped a winning streak dating back to January 2019 when the Americans lost to France in the run-up to the World Cup. It was the U.S. team's only draw this year.

"Did we expect this result tonight? No," said U.S. forward Megan Rapinoe, who did not start but came on as a substitute in the 64th minute with the score 2-0. "It's frustrating, and it's frustrating that it's Sweden. They found a lot of space on us. I don't even know how many goals we have given up this whole year. I don't remember the last time we gave up a goal. So to give up three is not great."

Sweden's offense deserved all the credit. Blackstenius' header into the far corner off a cross from Sofia Jakobsson in the 26th minute gave the team a first-half lead.

The United States, which came out stale, had its best chance of the opening half in the final moments when Rose Lavelle's shot hit the post. Coach Vlatko Andonovski made changes for the second half, subbing in Carli Lloyd for Alex Morgan and Julie Ertz for Sam Mewis.

But Blackstenius scored again in the 54th minute, beating goalkeeper Alyssa Naeher, as the Americans continued to struggle. Lina Hurtig added the final goal in the 72nd.

Sweden goalkeeper Hedvig Lindahl acknowledged the win over the favorites was encouraging, but it's still just the beginning of the tournament. Ahead are group games against Australia and New Zealand.

"I know for a fact that you can go very far in a tournament even if you lose to the USA or whoever you play in the first game," Lindahl said. "So in the end I don't know how much it means, but for sure we showed the world and ourselves that we can play well against a team like the U.S. or any team."

The loss was the first for the United States under Andonovski, who took over when former coach Jill Ellis stepped down following the team's World Cup victory in France. Late in the match, Andonovski sat expressionless on the bench.

The Swedes were without Magda Eriksson because of injury. The team said she has been training, but because of the compact schedule of the tournament she was held out of the opener.

Tokyo is Sweden's seventh Olympics. After getting eliminated by Sweden on penalties in the quarterfinals five years ago, U.S. goalkeeper Hope Solo famously called the Swedes cowards for their defensive tactics.

Sweden went on to win the silver medal, losing to Germany 2-1 in the final.

The United States has been to all seven Olympics that have included women's soccer, too, winning four Olympic gold medals, more than any other nation. The team is vying to become the first to win Olympic gold following a World Cup title.

"I think ultimately as an athlete you go through ups and downs, and this is a hard result but it's the nature of a tough tournament," U.S. forward Christen Press said. "It wasn't going to be easy. We weren't going to breeze through six games no matter what. So here we are."

It was just the sixth time that the United States had lost by three or more goals.

Sweden now leads Group G heading into Saturday's game against Australia in Saitama, while the United States faces New Zealand at the same stadium. The top two teams in the group advance to the knockout round.

"It is what it is," Rapinoe said. "We got bopped, and we have two more games coming quick and fast. And now we know exactly what we need to do. We need to win these games and eventually get out of the group and go from there."

Who could be the new breakout stars of the Tokyo Olympics for Team USA?

Simone Biles says she withdrew from final to protect team, self; plus more from Tokyo

Simone Biles says she withdrew from the Olympics gymnastics team final because she wasn't in the right headspace to compete. Here's the latest.

With Simone Biles out, Russians win gymnastics gold over US

The Russian Olympic Committee has won the gold medal in women’s gymnastics after U.S. star Simone Biles exited with a medical issue.

Simone Biles finds peace of mind at Olympics: An analysis, plus more from Tokyo

Maybe gymnast Simone Biles' decision to opt out of the Olympic team and all-around events isn't so stunning after all. Here's an AP analysis, plus more from Tokyo.

Biles was the defending Olympic champion in the vault. Plus, get the latest on the games tonight.

University of Virginia swimmers Alex Walsh and Kate Douglass both win medals for the United States in the 200-meter individual medley at the Tokyo Olympic Games.

Get the latest updates and complete coverage from Day 6 of the Tokyo Olympics ... plus an updated medal count, TV schedule and photo highlights.

The win helped the U.S. star make up for what has so far been the worst showing of her Olympic career. Get the latest on the Tokyo Olympics here.

Australia’s Ariarne Titmus beat American Katie Ledecky in the 400-meter freestyle in one of the most anticipated races of the Tokyo Olympics. 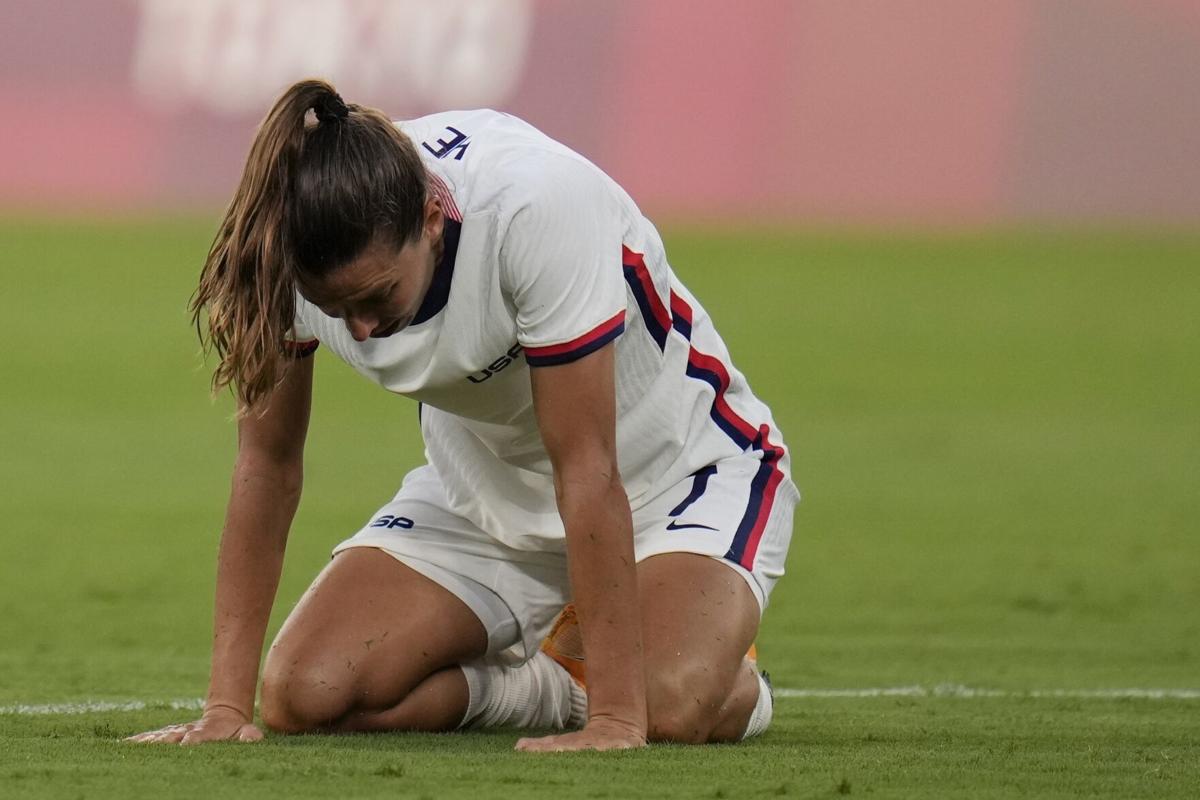 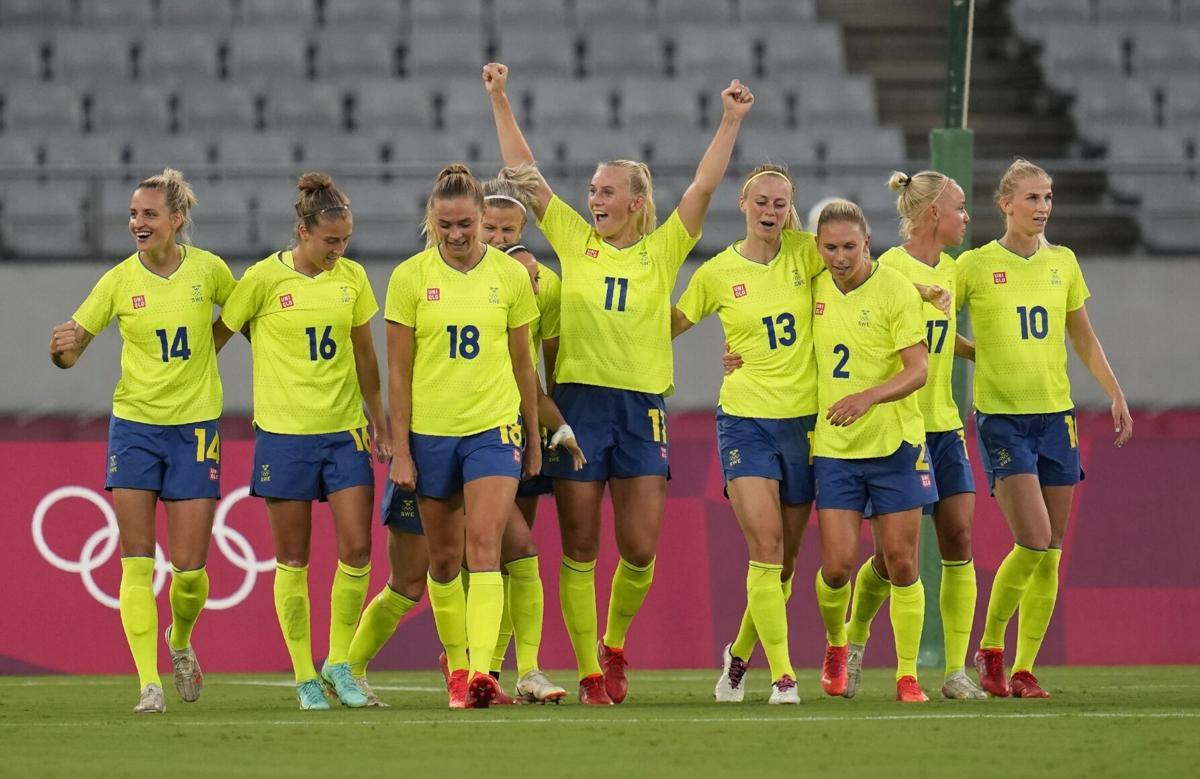 Sweden's Stina Blackstenius (11) celebrates scoring her side's 2nd goal against United States during a women's soccer match against US at the 2020 Summer Olympics, Wednesday, July 21, 2021, in Tokyo. (AP Photo/Ricardo Mazalan)