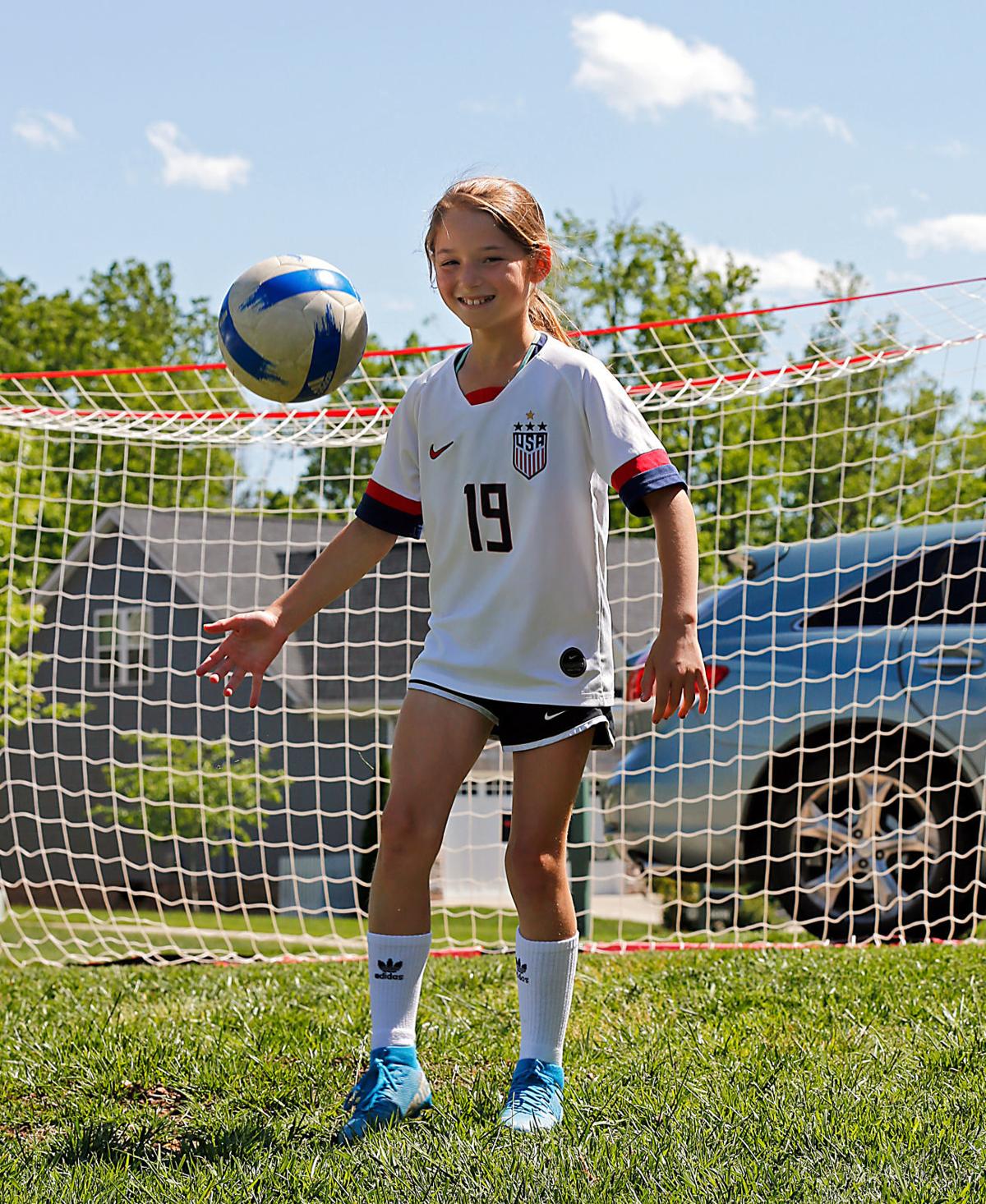 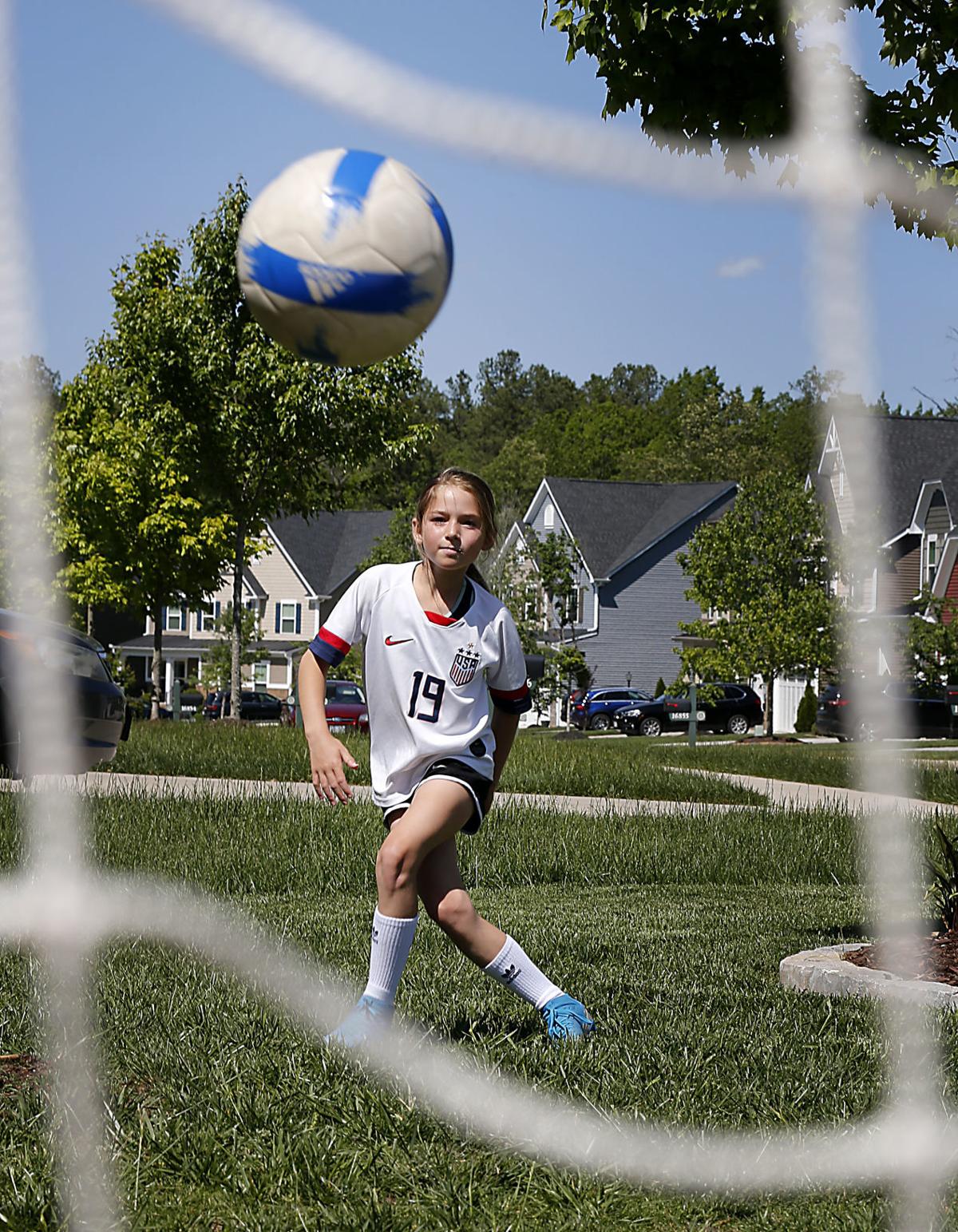 Piper Burke makes a left-footed blast into the top right corner of the goal in her familiy’s front yard. Burke is naturally right-footed, but has been working on her left. 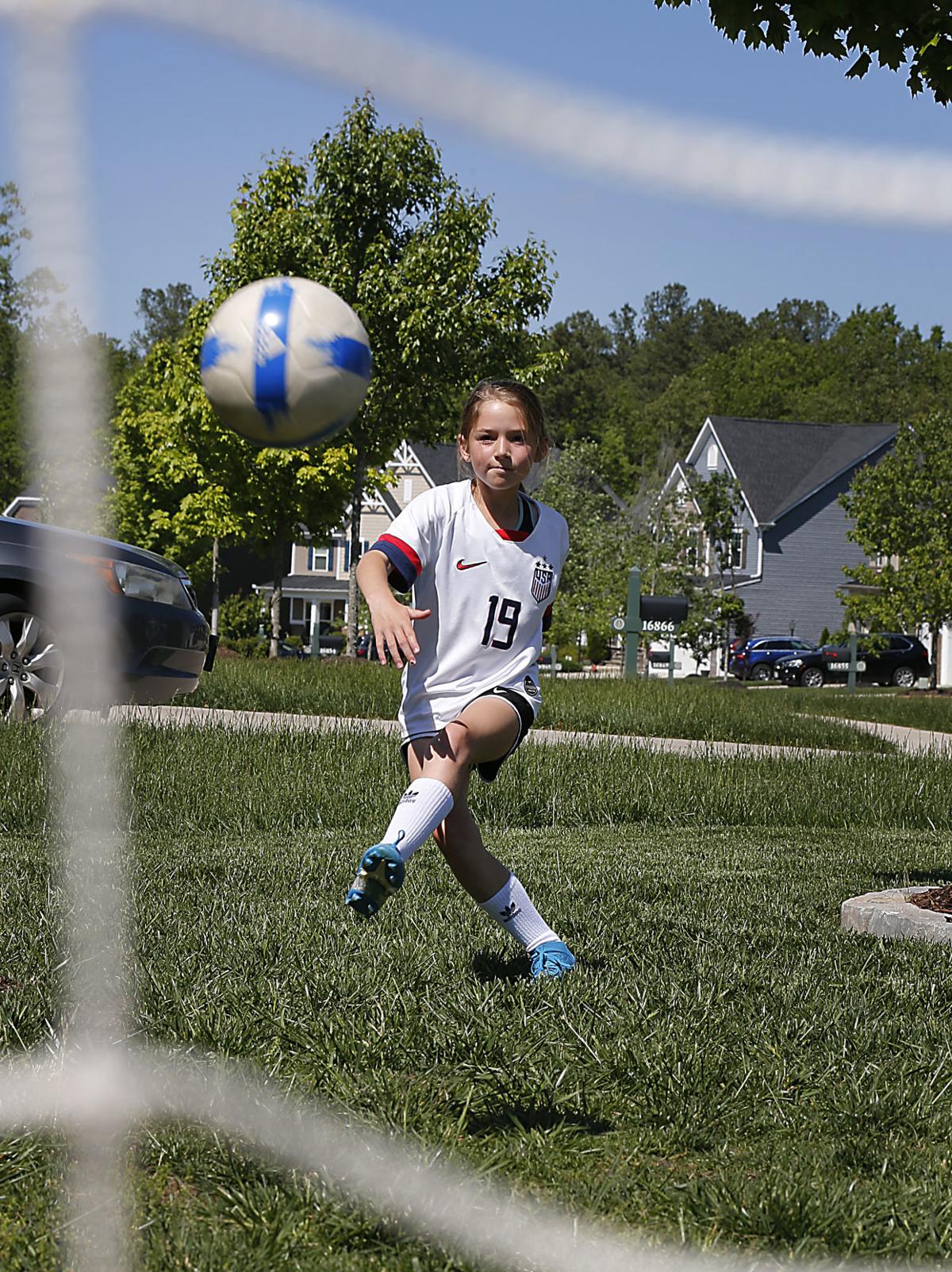 Piper Burke,10, makes a left-footed blast into the top right corner of the goal in her familiy’s front yard Mon. May 4, 2020.

If imitation is in fact the sincerest form of flattery, United States women’s soccer icon Brandi Chastain should today feel flattered beyond description.

“It was fun,” said Piper, a 10-year-old fifth-grader at Winterpock Elementary. “I enjoyed it. It was nice just to get out and play.”

Piper, an attacking midfielder on the Kickers’ U-11 girls team, said her squad has been idle for the past month and a half because of the ongoing COVID-19 lockdown.

“It seems like such a long time,” she said. “I miss playing. I miss my friends on the team. It’s been very hard.”

The video contest was created by Kickers management to keep youth players engaged and focused during a long period of indefinite quarantine. Piper’s father, Mike, a former Kickers pro player and current director of the club’s 11-14 youth program, said selection of an appropriate celebration was at first problematic.

“Then one day we were out taking a drive with the kids,” Burke said. “Audrey (his wife) said, ‘How about Mia Hamm’s celebration? Couldn’t Piper do something like that?’ And I’m thinking: ‘Mia Hamm? I don’t remember Mia ever doing a lot of celebrating.’”

“I said, ‘Well, I don’t know about Mia, but what about Brandi Chastain’s World Cup celebration?’” Burke said. “Turns out, that’s who Audrey was talking about. So now she thinks it was her idea and I think it was mine.”

Piper, who was born 11 years after Chastain’s shot hit its target, was familiar with neither Chastain nor the impromptu fashion statement for which her celebration is famous. Education was quickly accomplished. Chastain videos and interviews are available in abundance on YouTube.

Daughter and father agreed that accuracy and attention to detail would be important. But therein lay a problem. Piper is by nature a right-footed kicker. Chastain struck her shot with her left foot.

“That was a little bit of a challenge for her,” Burke said. “Fortunately, she’s been working on it for a while now. Her coach has been talking to her about using her left foot.”

The necessary location of the shot — top right corner — added significantly to the degree of difficulty, Burke said.

“Who knows? Maybe she got a little lucky with it,” he said. “But then again, maybe not. I know she’s been practicing. When the time came she was primed and ready.”

The video, deftly edited, features alternating snippets of Chastain and Piper — placing the ball on the penalty spot, avoiding eye contact with the goalkeeper, launching the kick and celebrating with jubilant teammates. Piper’s portion was filmed by Burke in the front yard of the family’s home in Moseley. Piper’s 12-year-old brother, Declan, played the role of Chinese goalkeeper Gao Hong. Neighborhood friends were cast as Piper’s teammates.

A technical problem interrupted the filming. Burke’s phone camera was incorrectly set for time lapse instead of standard video when he began filming the kick from a stepladder behind the goal. Time lapse, Burke said, presents a video at “basically supersonic speed.”

Burke said he filmed “20, maybe 30 kicks, some of them pretty good ones,” before he and Piper paused to review their work. That’s when they discovered the error.

“Dad messed up a little bit and got kind of mad about it,” Piper said. “That part was pretty funny.”

Piper hit the bullseye with a smooth, confident shot on her first attempt with the camera set properly.

Chastain has said many times that her response to her World Cup-winning kick — pulling off her white U.S. National Team jersey and waving it above her head in giddy celebration, thereby displaying her black sports bra to, well, the world — was purely spontaneous. Piper’s was anything but.

“She was so focused on making the kick, on scoring, that she’d forget to celebrate,” Burke said. “We literally had to remind her: ‘OK — once you’ve made the kick, you have to celebrate.’”

Burke said he and his wife made certain beforehand that Piper was comfortable with the jersey-removal aspect of the video.

Piper’s National Team jersey is perhaps the most inaccurate aspect of the video. Chastain wore jersey No. 6. Piper wears No. 19 in the video and in Kickers youth competition. She does so for a reason. Her father, the Kickers’ leader in career assists, wore No. 19 while playing in Richmond.

The video ends on an unexpected note: quarantine humor. As her teammates rush to share her elation, Piper stops them with arms outstretched and both palms facing forward. Her message is unmistakable: Don’t come any closer. Maintain your social distance.

Piper Burke makes a left-footed blast into the top right corner of the goal in her familiy’s front yard. Burke is naturally right-footed, but has been working on her left.

Piper Burke,10, makes a left-footed blast into the top right corner of the goal in her familiy’s front yard Mon. May 4, 2020. 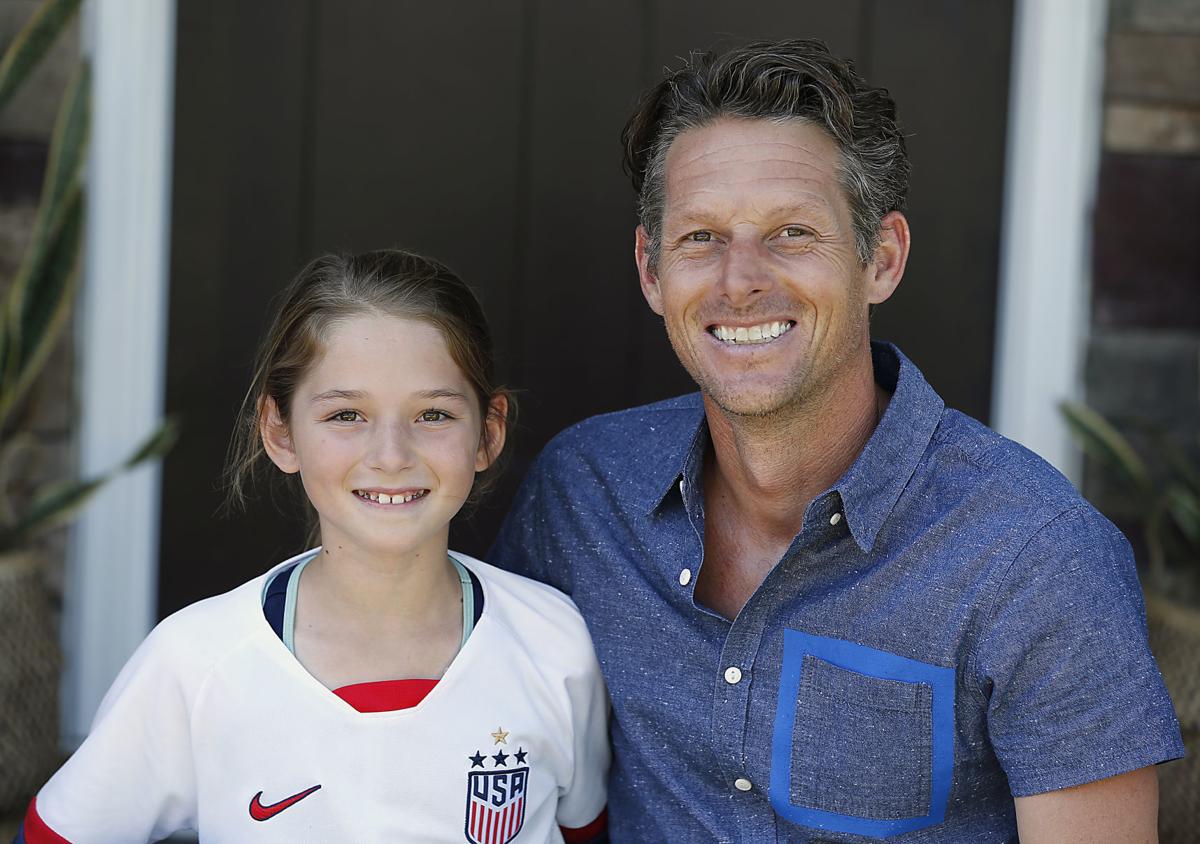 Piper Burke, 10, with her dad Mike Burke, a former Richmond Kickers standout and the current director of the club’s 11-14 youth program.