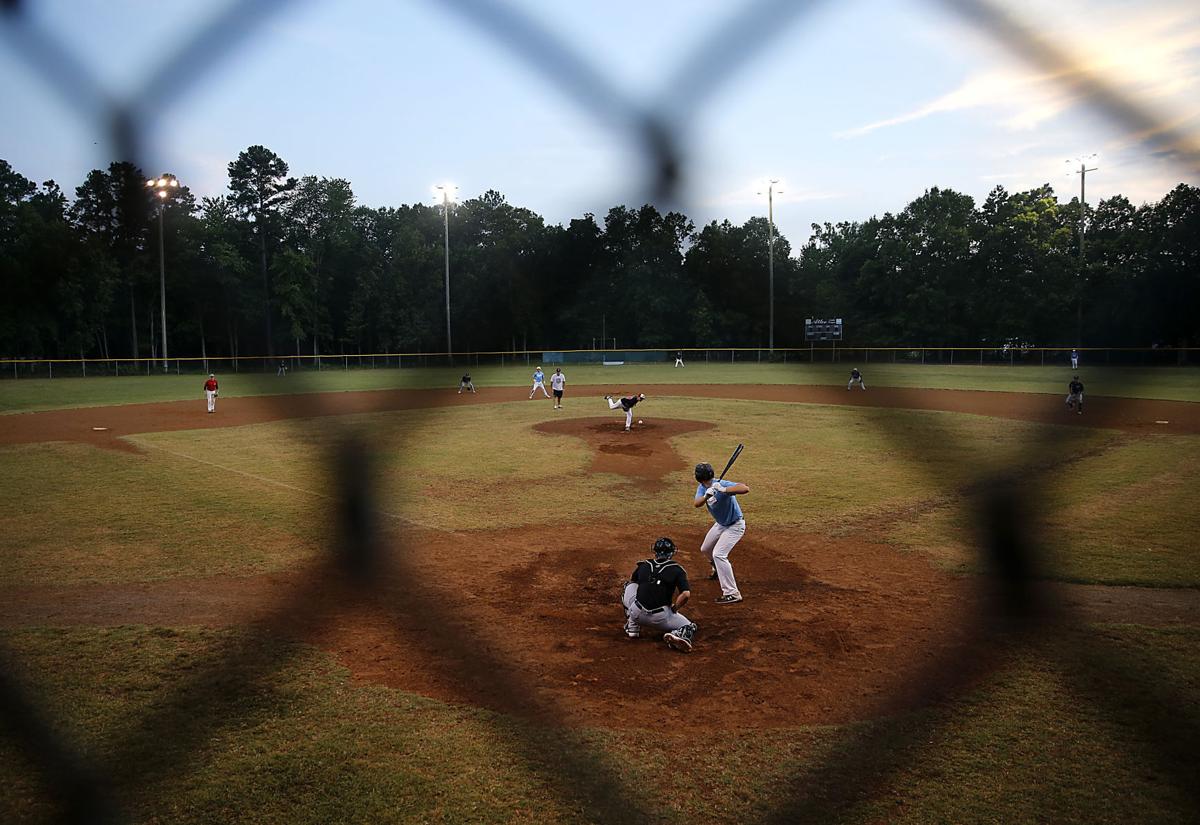 The Hometown Hawks and Richmond Streamers met at the Atlee Little League field in the Richmond Barnstorming Baseball League. 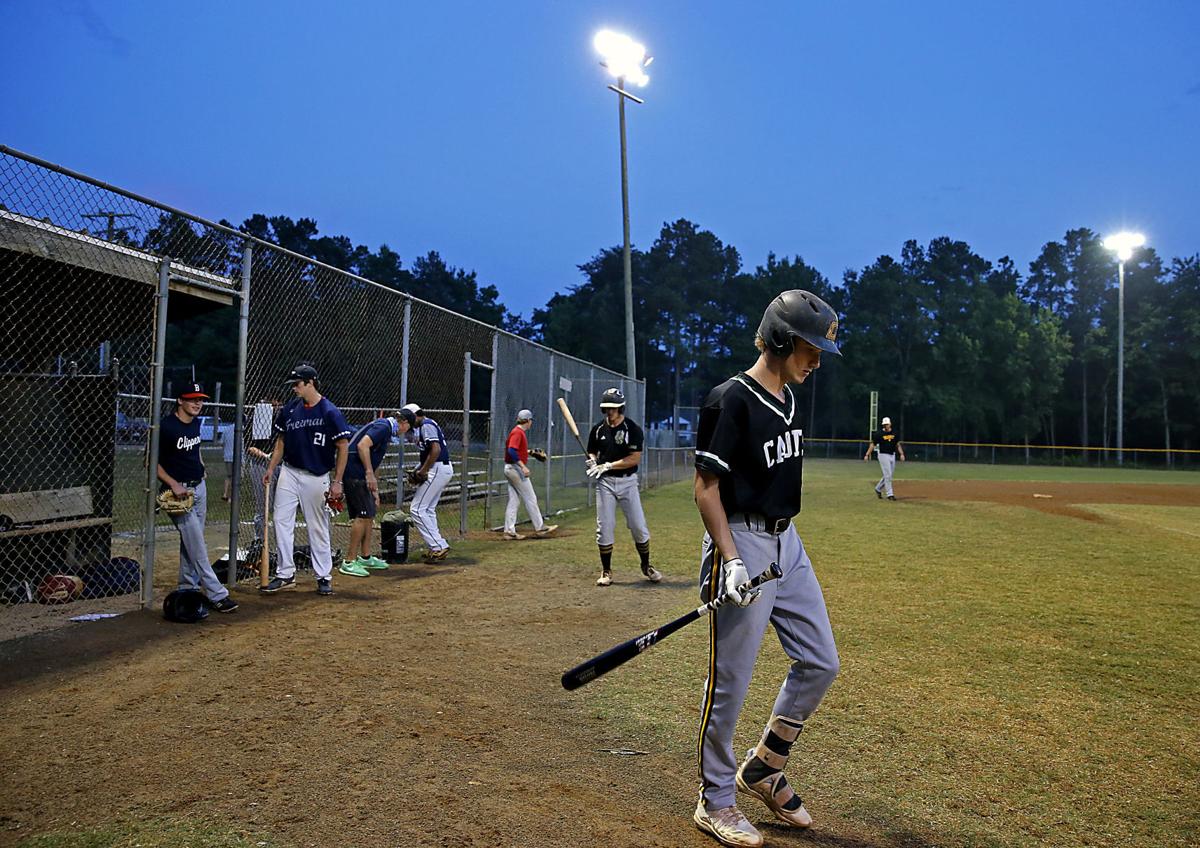 Hank Carpin of the Richmond Streamers played against the Hometown Hawks at the Atlee Little League field on Monday. 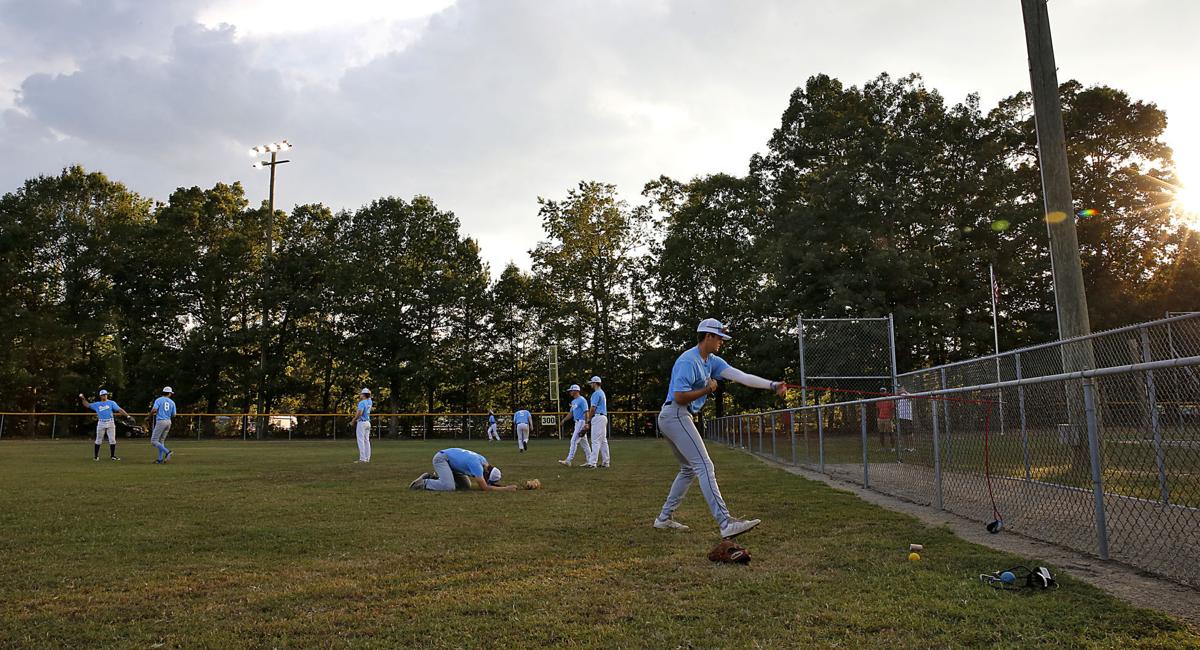 Hometown Hawks warm up prior to game against the Richmond Streamers at Atlee Little League Mon. July 20, 2020. 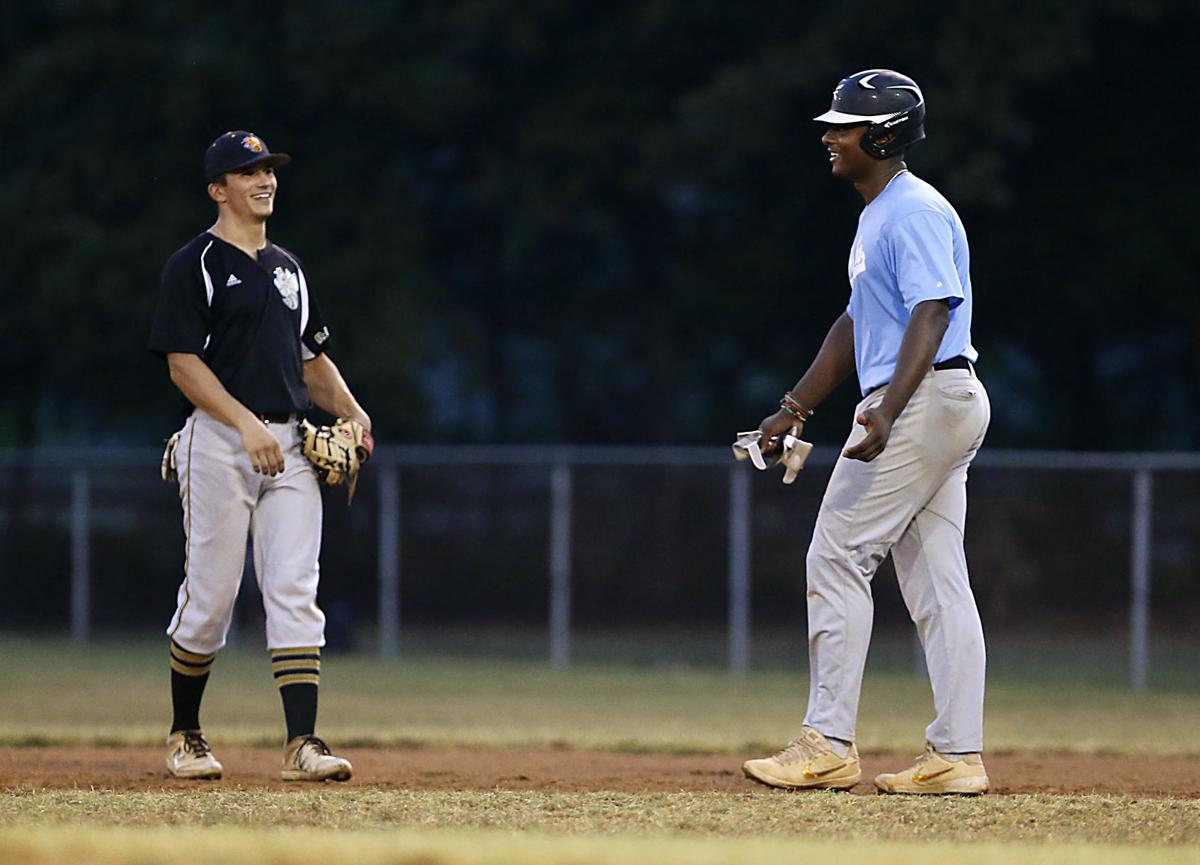 L-R, Reece Yeargain of the Richmond Streamers and Blake Doggett of the Hometown Hawks during a game at Atlee Little League Mon. July 20, 2020. Yeargain and Doggett are teammates at Randolph-Macon College. 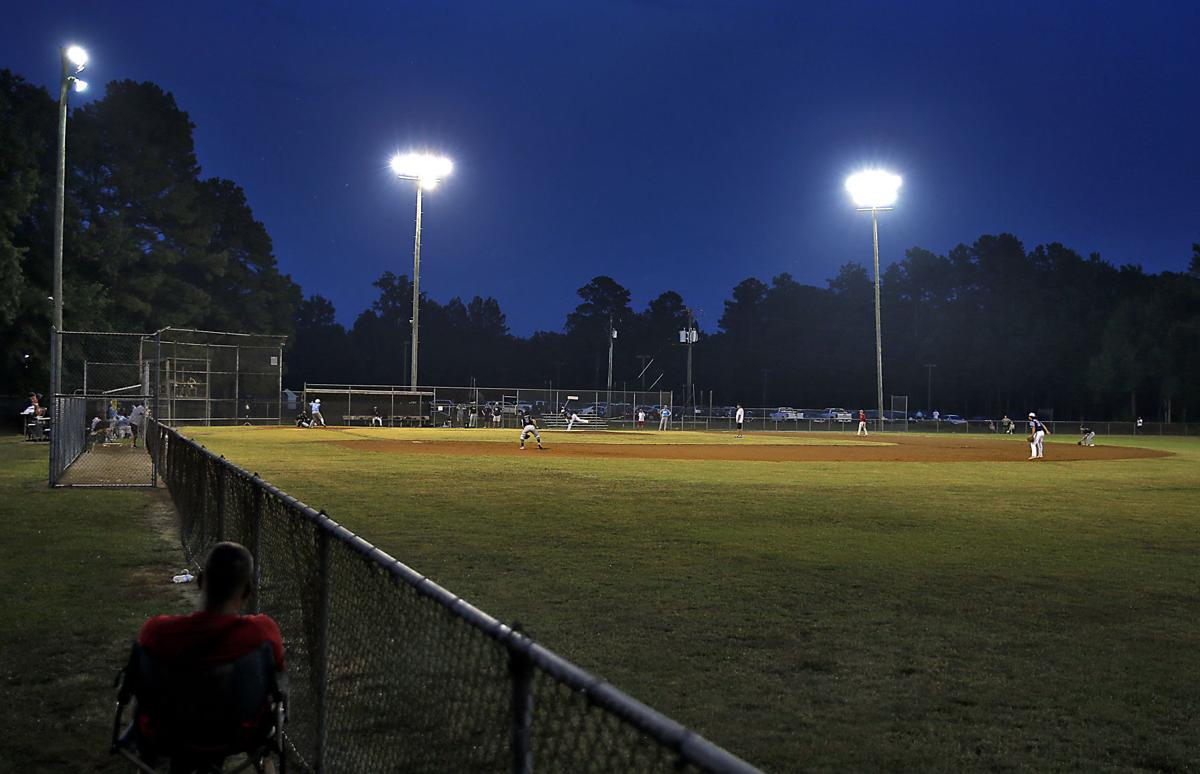 Hometown Hawks and the Richmond Streamers during a game at Atlee Little League Mon. July 20, 2020. 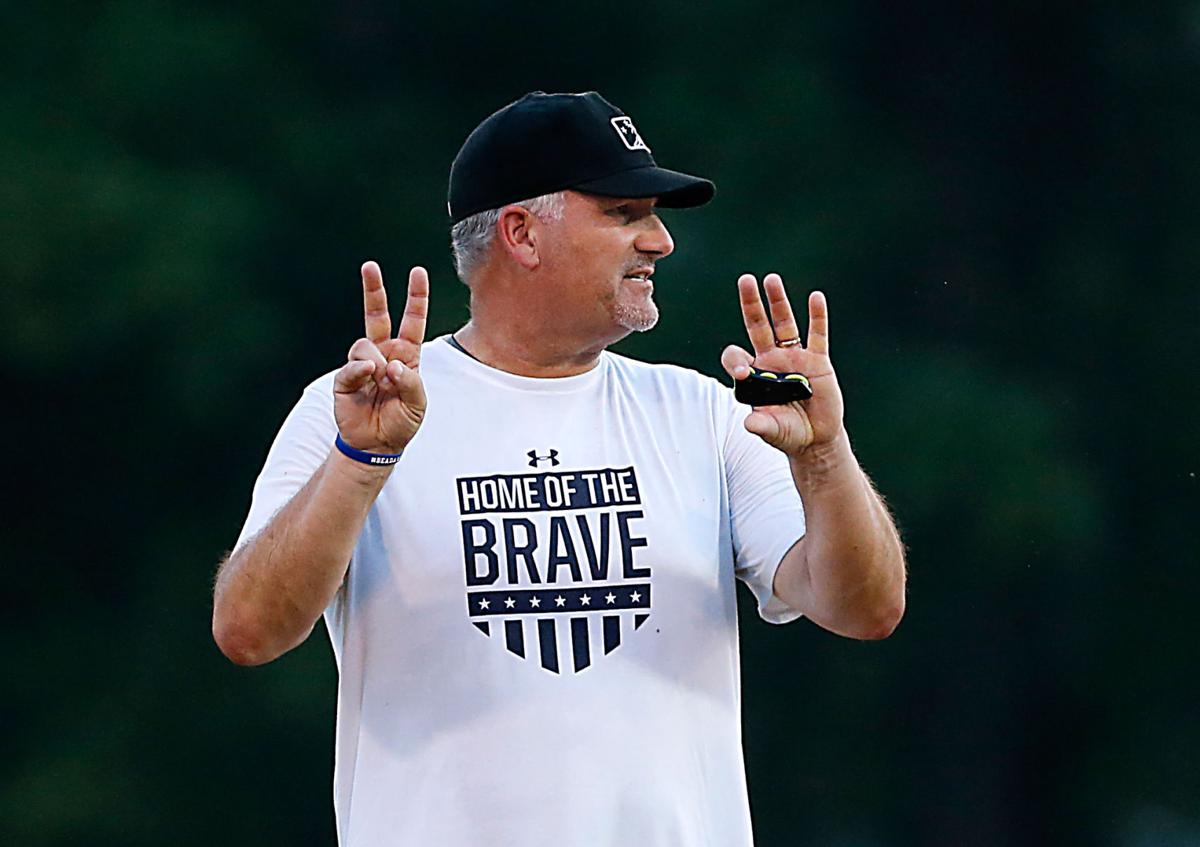 Earlier this year, with baseball at a halt due to the coronavirus, Mike Goleski found himself in conversations with a group that included his son Jack.

They had been bored out of their minds and filling the void by watching every baseball movie they could. “The Sandlot” was one that came up.

Jack is a rising sophomore pitcher at Pitt Community College in Greenville, N.C., and a former Hanover standout. Mike is a college umpire and a fill-in umpire for the Flying Squirrels, in addition to his job as a realtor.

But the college baseball season was cut short in March, and many of the summer, wood bat league opportunities were off the table.

They talked about what they could do and where they could go. Mike brought up his “Sandlot”-type experiences when he was younger — of just finding a field, kicking a spot in the grass to mark a base and simply playing.

“I said, ‘You don’t necessarily need a field, a backstop. If you want to play and you love the game and passionate about it, you go out and do it,’” said Mike, a 57-year-old originally from Syracuse, N.Y. “We’ve always done it for the love of the game, never for money ... just because you love to do it.”

Mike mentioned the thought to friend John Carpin, who coached the Tuckahoe American Little League All-Stars who nearly made the Little League World Series in 2013.

From those discussions, the Richmond Barnstorming Baseball League was born. Two teams of area players — many of whom grew up playing with and against each other, and who are now playing in college — were formed. They’ve competed against each other and against a couple other teams in the area, with a home base at the Atlee Youth Sports Complex in Mechanicsville.

For those involved, it’s brought a bit of old times back in strange times.

“Baseball’s all about getting a lot of reps and seeing a lot of pitching,” said Liam Simpson, a former baseball and football standout at Douglas Freeman who is now a wide receiver at the University of Richmond. “And that’s what we’ve done a good job of, because we’re getting a lot of at-bats. And it’s just also been really fun.

“And when you’re playing your best baseball, you’re super laid-back and you’re relaxed and you’re having fun. And it’s a really good environment for us to do that because we’re all comfortable around each other and we’re all good friends.”

It was about a month ago that rosters began being assembled. Jack established a group text message of guys who thought they would want to play. Simpson went through his contact list asking people whether they had a place to play.

Players jumped at the opportunity. Most had summer league assignments previously, but many of those were wiped away. Those destinations included the Cape Cod League and Valley Baseball League — which were canceled — and the Coastal Plain League, where several teams aren’t playing.

Two teams were formed for wood bat play: the Hometown Hawks, which Jack helped put together, and the Richmond Streamers, which Simpson helped construct and where Carpin is one of the coaches. “Hawks” was the name of a travel team on which some of the players competed together several years ago, adding to the new league’s “bringing the band back together” feel.

The rosters have included a range of players at or headed to Division I through junior college levels, with represented schools including Virginia Tech, James Madison, William & Mary, VMI and Randolph-Macon. Simpson, though he’s on the football team at Richmond, is planning to go out for the Spiders’ baseball team as well.

The two squads combined to travel to play the Deltaville Deltas late last month, a summer wood bat team of current and former college players, before playing their first game against each other. The Hawks have also played MPH 101, a team of rising high school juniors.

On Monday night, the Hawks and Streamers met again, at the Atlee Youth Sports Complex. After waiting through a youth team practice, and after a passing shower and lightning delay, the teams began play at close to 8:30 p.m.

The Hawks donned sky blue jerseys and caps, matching the shade worn by Hanover High. The Streamers wore an assortment of playing gear. Mike umpired from behind the mound. A small cohort of spectators looked on.

The collegial atmosphere among the two squads was apparent, but so was the talent. In the fifth inning in a game that was limited to six, the Hawks’ Nick Zona (Hanover, JMU) skied a grand slam shortly before Camden Grimes (Hanover, Chattanooga State) hit a line-drive home run to right-center field.

“I love it, I’m having the time of my life to be honest,” Grimes said of participating in the league.

The plan is to play into early August. Because of the positive returns, though, Jack believes the league could be more than a one-off. It was spur of the moment this year, but he believes it could be a big hit if brought back in 2021. It could be a bit of a refreshing alternative to playing out of town during the summer.

This year the league has served as a reunion of sorts and a chance to play when there’s been few opportunities in recent months.

“We thought we had played our last games together, Grimes said. “We had kind of accepted that, I guess. We played our whole lives together. And then we get another chance to kind of play against kids from the West End, who we always kind of have good games against, good rivalry going on with them.

“And just a chance to compete, it’s awesome.”

Taylor, 23, was taken in the second round of the NFL draft in April when the Seahawks traded up to the 48th pick to select him.

“They’ve been the nicest, most gracious people that I could have ever been around."

A racing-enthusiast friend asked, “Isn’t it great that Jimmie Johnson — despite all the trouble he’s endured this season — could still rally a…

A large group of spectators crowded the 18th hole as Vijay Powell and Charlie Kennedy battled it out one last time on the green.

The Hometown Hawks and Richmond Streamers met at the Atlee Little League field in the Richmond Barnstorming Baseball League.

Hank Carpin of the Richmond Streamers played against the Hometown Hawks at the Atlee Little League field on Monday.

Hometown Hawks warm up prior to game against the Richmond Streamers at Atlee Little League Mon. July 20, 2020.

L-R, Reece Yeargain of the Richmond Streamers and Blake Doggett of the Hometown Hawks during a game at Atlee Little League Mon. July 20, 2020. Yeargain and Doggett are teammates at Randolph-Macon College.

Hometown Hawks and the Richmond Streamers during a game at Atlee Little League Mon. July 20, 2020.