Hallman: Racing on dirt was success but could be tidied up
0 comments
Share this
1 of 3 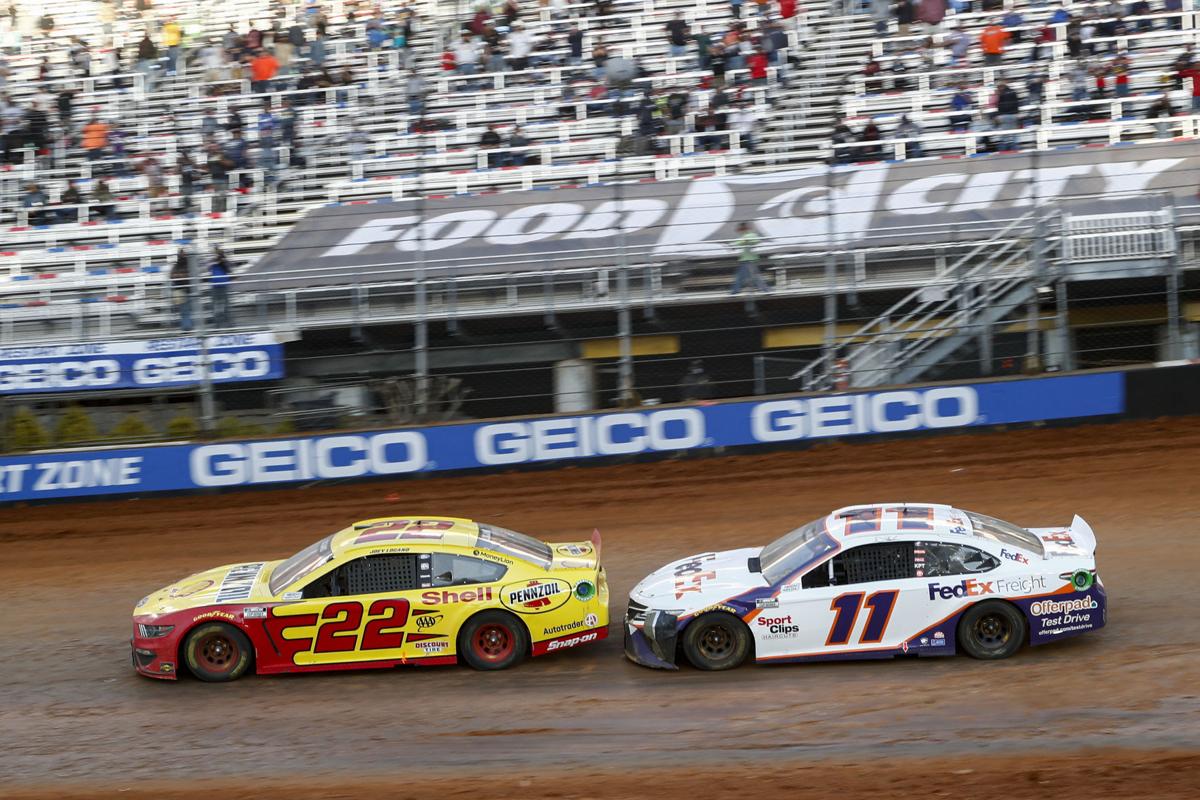 Joey Logano (22) and Denny Hamlin waged a fun battle for the lead during the final stage of Monday’s Food City Dirt Race at Bristol Motor Speedway, the first event on a dirt surface in NASCAR’s premier series in more than 50 years. 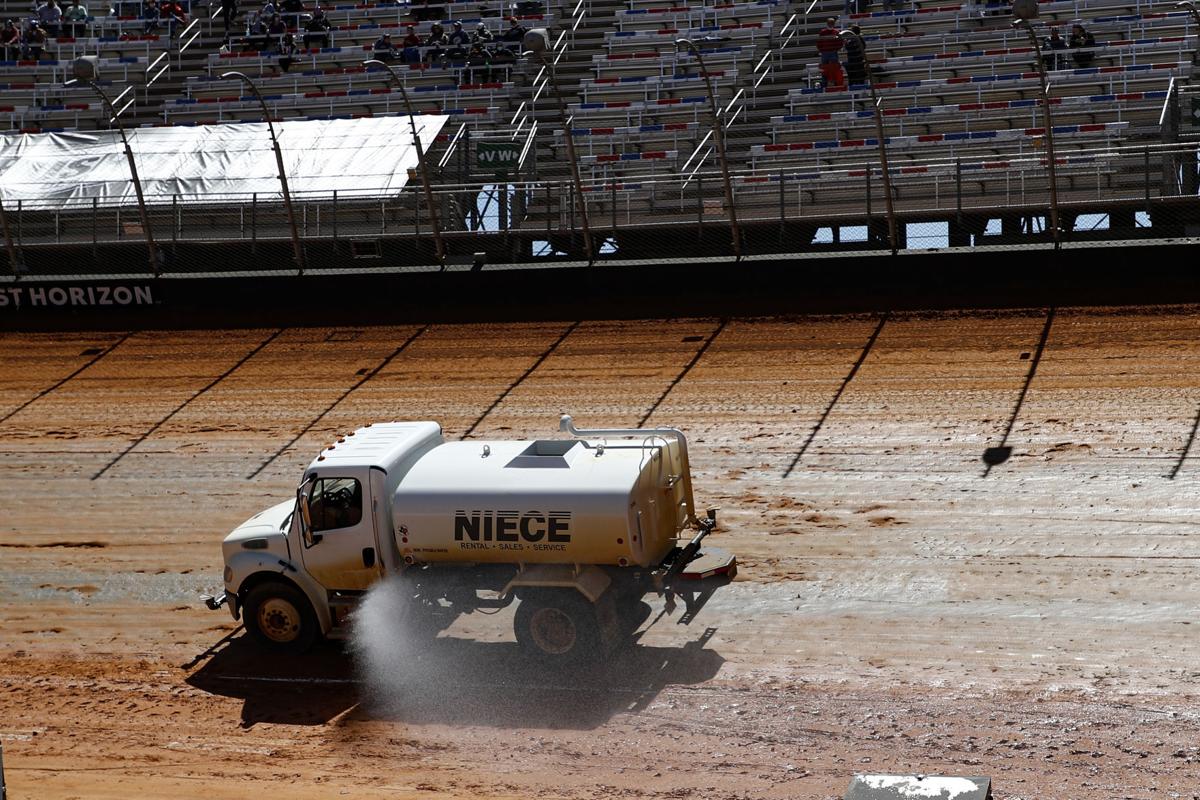 A water truck sprays the track after an accident during an NASCAR Truck Series race on Monday, March 29, 2021, in Bristol, Tenn. (AP Photo/Wade Payne) 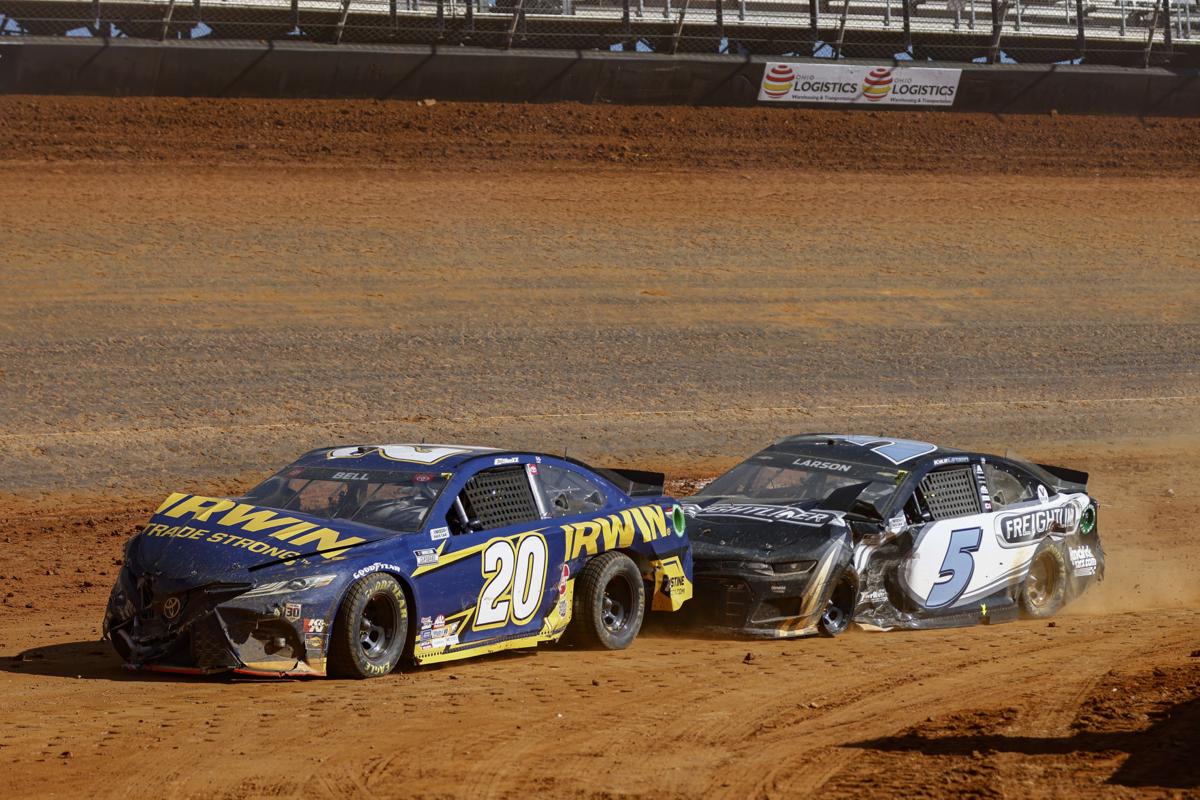 A pat on the back because it sounded like a good idea when the track announced, midrace, that Bristol will have more races on dirt in the future.

Despite severe weather problems that delayed the race for a day, despite flaws in the execution of the event, despite innumerable skeptics — despite all that, the decision to truck in 23,000 cubic yards of clay and transform the paved half-mile oval into a temporary dirt track for a Cup Series race worked.

We know it worked because after the checkered flag waved, the salient chatter was about Hamlin’s decision to take a shot at using the outside line to pass front-running Joey Logano rather than dive to the inside, brake late, apply his front fender to Logano’s rear quarterpanel and make the pass that way.

And there was more than the bump-that-wasn’t to make the race memorable.

Before that two-lap fizzle at the end, Hamlin and Logano had a serious bout for the lead lasting several laps. Logano prevailed, but more than once after that Hamlin threatened again.

Earlier still, Daniel Suarez, surprised even himself with his dirt-track efficacy, taking the lead from superstar Martin Truex Jr., who had easily won the preliminary Truck Series race. Suarez made short work of Truex and led 58 laps in the second half of the race until Logano’s Ford caught and passed him. Suarez brought his Toyota home in fourth place.

He had a top-10 all but locked up until late in the race when a bump from Stenhouse’s Chevy resulted in a flat left rear tire and a spinout.

Wallace recovered so quickly from his 360-degree spin — straightening the car and heading to the pits for a tire change — that there was no need for a caution flag. Too bad for Wallace because it meant the race wasn’t slowed and he lost a lap in the process.

Those things and more made the race worth watching.

And all of it happened in dirt-track style, with drivers pitching their cars into the turns at an angle to make the most of what was, for most of them, an unfamiliar surface. For many watching on TV or in the stands, it was an unfamiliar skill.

Those fans, some of whom had jeered at NASCAR for undertaking this dirt-track experiment after 51 years of pavement-only events, began peppering social media with suggestions — many half-kidding but others not so much — for other tracks that might want to try a conversion to dirt. “Hey, this is a show!”

Just a day earlier, the prospects of a race that could be anything other than excruciating seemed miniscule.

On Sunday, rain had reduced the surface to soup, and the attempted truck race was called off after one green-flag lap. So much mud was thrown up onto trailing windshields that only the lead driver could see ahead.

More rain came, turning much of the infield into a shallow brown pond.

The race was postponed until Monday.

A single day seemed inadequate to get the track in race condition, but the crew that groomed the surface worked through the night, and on Monday, the green flag fell on time.

There were problems, some of them serious. The track was dry enough that instead of blinding mud there was blinding dust. Drivers were radioing their crews that they couldn’t even see the car just ahead. A series of disastrous dust-bowl restarts led NASCAR to decree that it would ditch its usual two-abreast restarts and make them single-file for the rest of the race.

It was a good call, saving the race from descending into a debacle. Apparently, the change had been contemplated by NASCAR prior to the race — something officials should have made public.

Another change — this one made in advance — was to eliminate the need for super-fast pit work. Reluctant to have cars hustled on a dust-covered pit road, NASCAR gave teams a set time to service the car and the field returned to the track in the same order it had entered the pits.

On the one hand, that eliminated a traditional part of the competition. On the other, it meant the race would be decided on the track, not by a quick tire change.

The single-file restarts mitigated the visibility problems but didn’t end them. Some dirt-racing experts say a night race would be an improvement — more moisture in the air, typically, and no sun’s rays refracting in the floating dust.

Some fans in the stands were also taken aback by the thickness of the rising dust, making it tough to see what was going on and leaving them with their own brown coating, just like the cars. Perhaps NASCAR can improve on that, but don’t expect the dust to disappear.

Some observers said the cars were lumbering around the track and suggested NASCAR may want to allow teams to bring a lighter, nimbler car to Bristol for the track’s next dirt race.

Maybe that’s a good idea, but think hard about it. Looking more like something else isn’t necessarily the goal.

The Cup Series, on all its different kinds of tracks and surfaces, has always had its own set of challenges.

The Bristol dirt could use a little tidying up, but with a whisk broom, not a shovel.

Giants' prospect Heliot Ramos stays hot in 12-6 win, may not be with Flying Squirrels long

Joey Logano (22) and Denny Hamlin waged a fun battle for the lead during the final stage of Monday’s Food City Dirt Race at Bristol Motor Speedway, the first event on a dirt surface in NASCAR’s premier series in more than 50 years.

A water truck sprays the track after an accident during an NASCAR Truck Series race on Monday, March 29, 2021, in Bristol, Tenn. (AP Photo/Wade Payne)