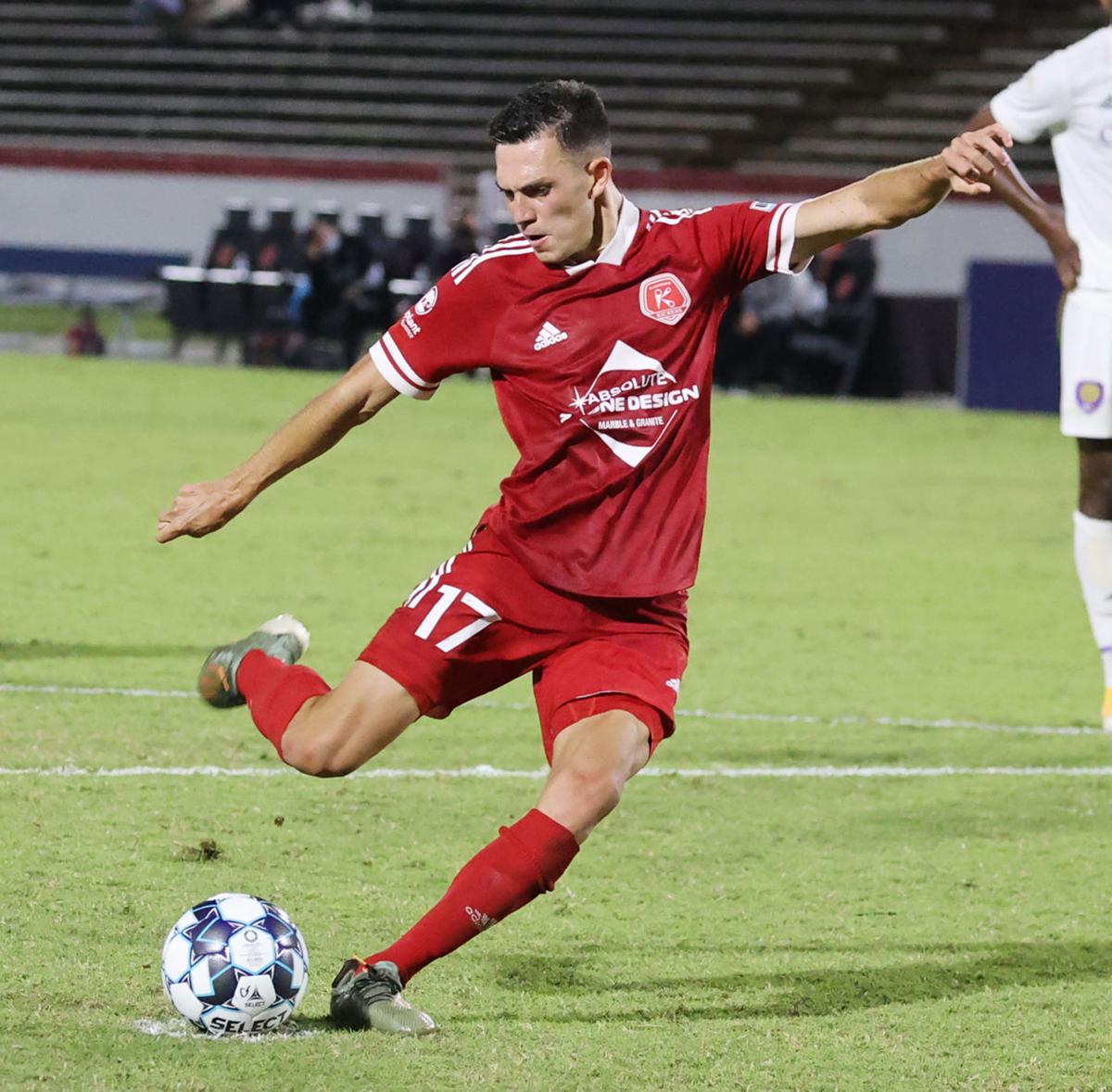 The Kickers’ Jonathan Bolanos followed up his first goal as a pro Wednesday night with a second score, this time via the penalty spot. He sent his PK down the middle of the goal and past a diving keeper to give Richmond a 2-0 cushion. 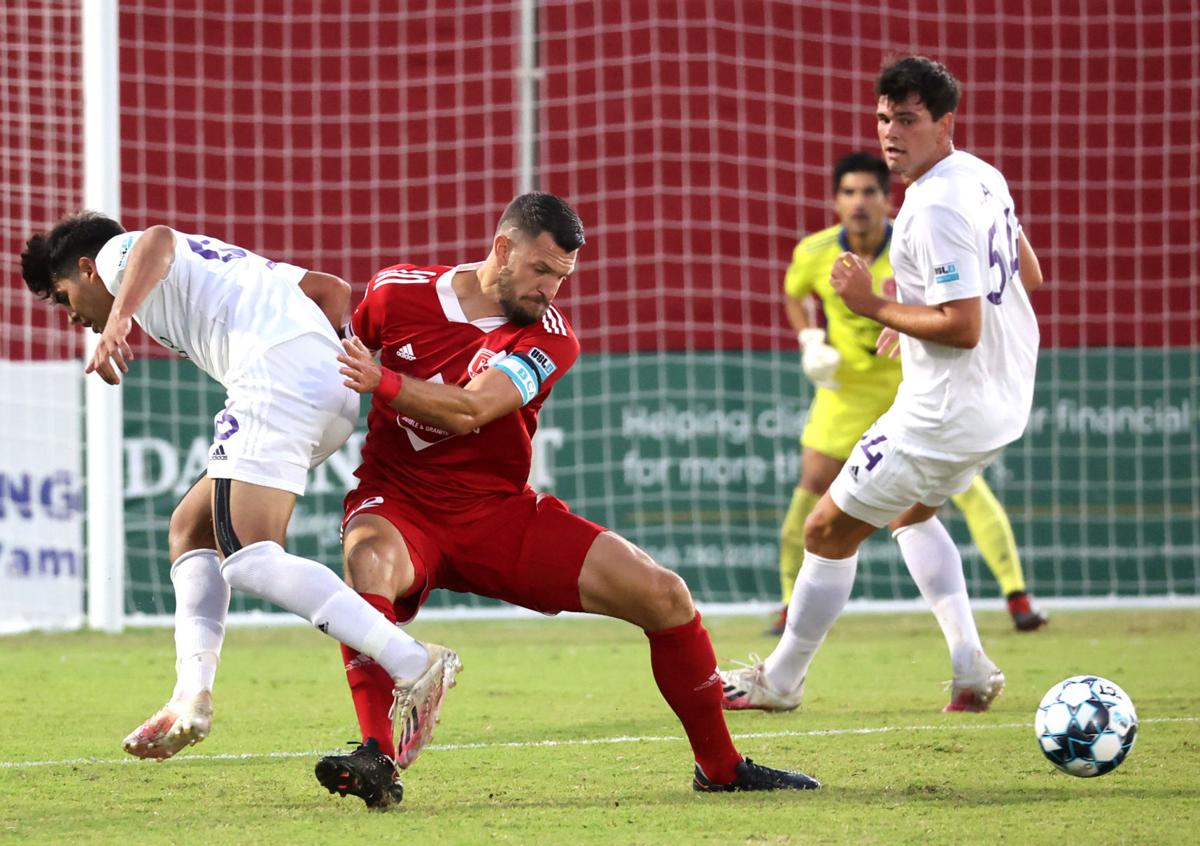 The Kickers were strong defensively Wednesday night, nearly securing their fourth clean sheet of the season until conceding late. 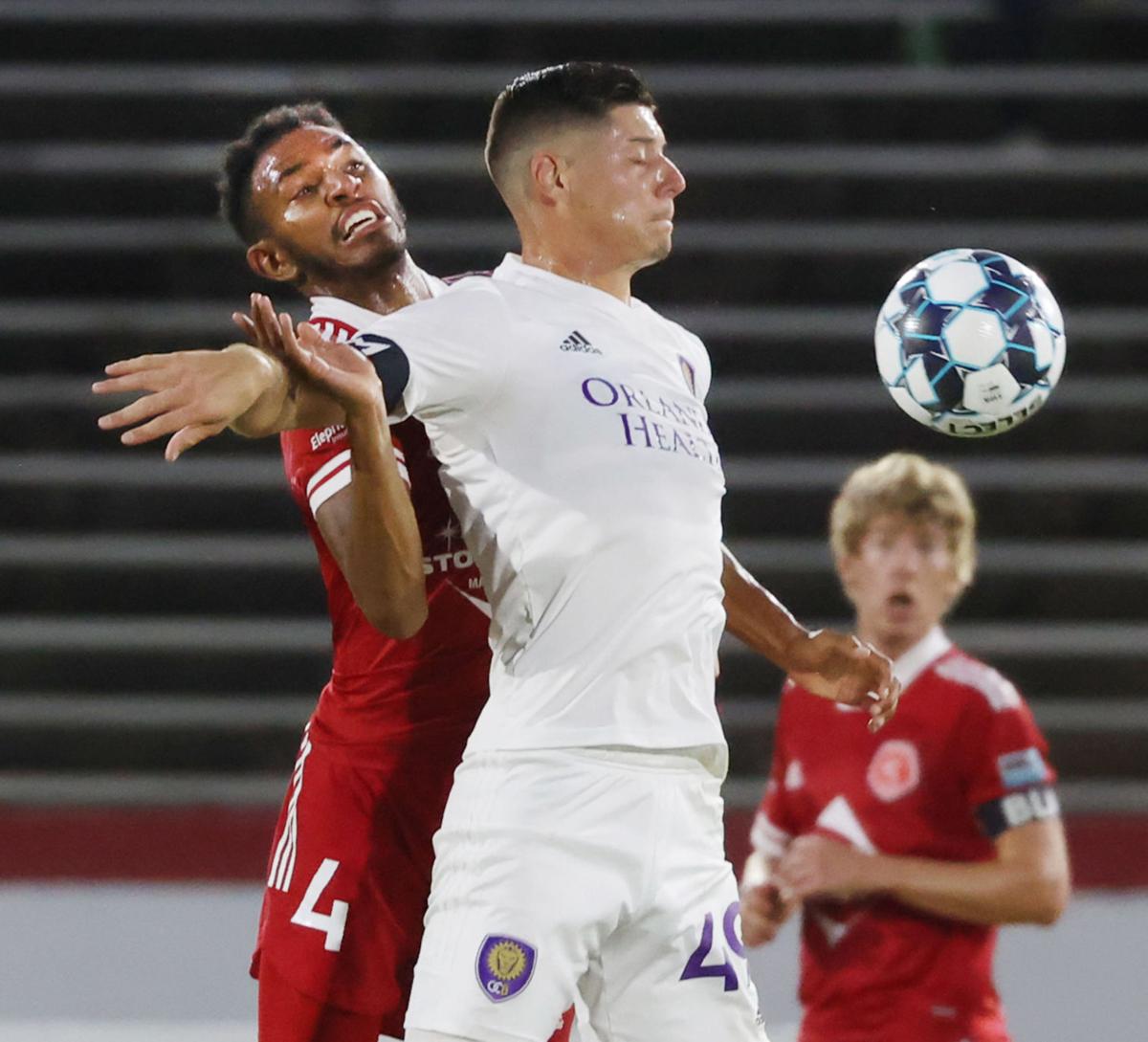 Kickers’ Ivan Magalhaes is behind Orlando’s Wilfredo Rivera as he plays it off his chest during the Kickers game on Wednesday, Oct.7,2020. 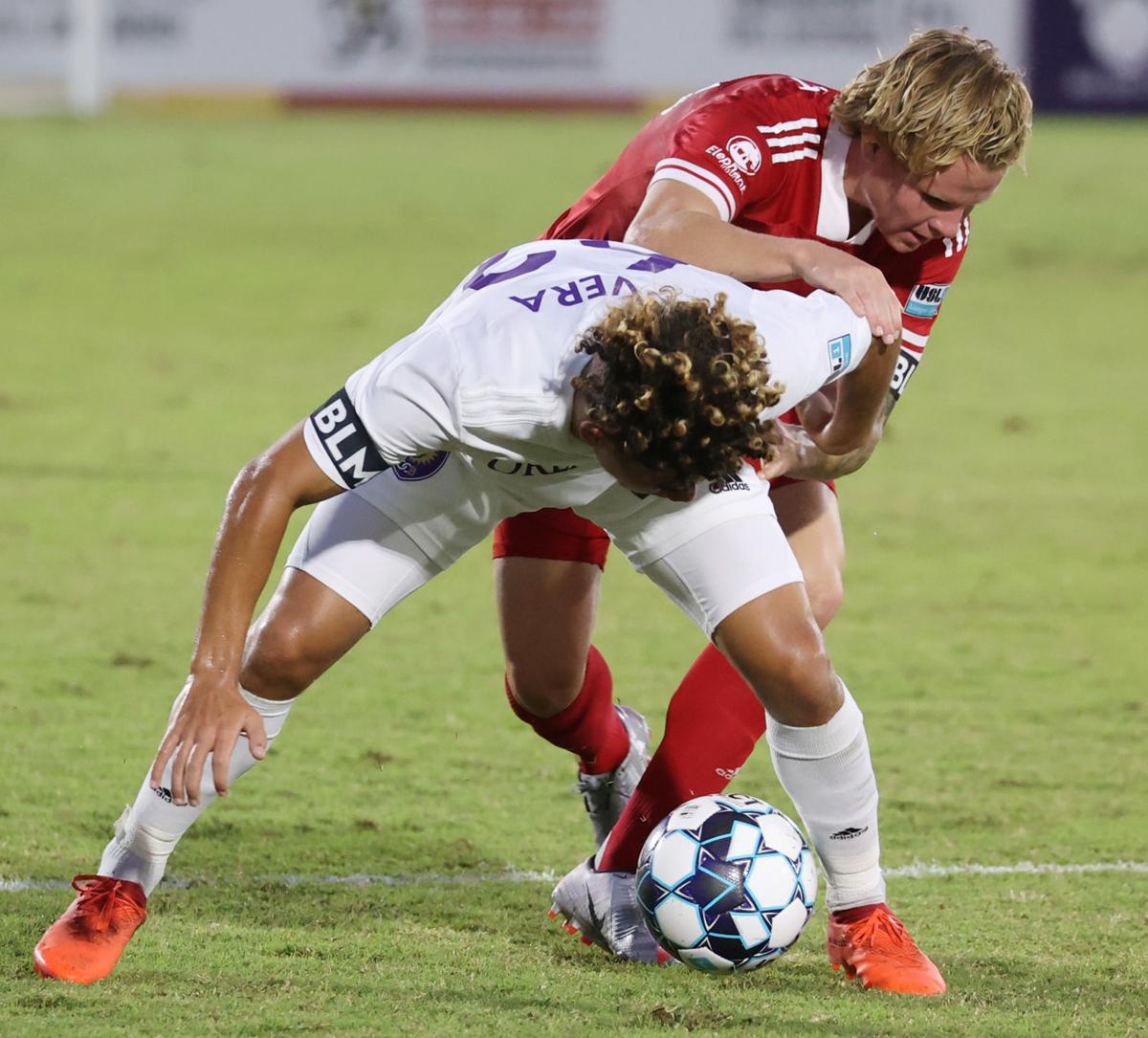 Kickers’ Ryley Kraft muscles Wilfredo Rivera for the ball during the Kickers game on Wednesday, Oct.7,2020.

Then, why not make it two?

The rookie from Miramar, Fla., scored twice in the first half against visiting Orlando City B to lift the Kickers to a 2-1 victory in front of 636 fans at City Stadium, and push Richmond into the coveted second spot in the USL League One standings.

Because of modifications to this year’s league schedule, there will be no four-team playoff. Instead, the top two teams in the standings will advance to the USL League One Final.

Bolanos was signed by the Kickers (7-3-2) in January, after a four-year career at High Point during which he scored 15 goals and contributed 10 assists.

The midfielder appeared in 10 of Richmond’s 11 games heading into Wednesday, but Wednesday was his first start since Sept. 5.

Bolanos broke open what had been a fairly uneventful first half in the 27th minute. Ryley Kraft sent a corner kick to the rear, right post that was headed back in front of goal by Ivan Magalhães.

The ball was then deflected back, and an attempt at a clear by Orlando’s Theodore Ndje went awry. The ball fell free and Bolanos quickly ran up and fired it from just inside the 18-yard box, and into the back of the net, to put the Kickers up 1-0.

It was a heads up play, but also a result of the team’s preparation.

“We had talked about it early in the week, in terms of how we wanted to set up on the corners,” Bolanos said. “And, I mean, Darren just reiterated all week that if it comes out, just smash it in the back of the net.

“So as soon as I saw it coming out, and rebounded my way, as soon I struck it I knew it was going in.”

Bolanos immediately sprinted to the Kickers’ bench in elation, pumping his fists, and was embraced by a multitude of teammates.

And that was just the start.

In the 42nd minute, Bolanos was taken down from behind in the box while trying to corral a deep pass from Magalhães. The penalty was clear, and Bolanos immediately got up and took the ball for his penalty kick.

He sent his PK home moments later, straight into the middle of the goal in the 43rd minute.

“Just extremely blessed and happy that that second goal went in,” Bolanos said. “So definitely another dream come true right there.”

Richmond mostly held steady from there, limiting Orlando’s chances. Orlando was reduced to 10 men in the 68th minute, after Moises Tablante was issued a second yellow card.

The Kickers’ Oalex Anderson drew a second, late penalty, on a tackle by Orlando’s Daniel Rosario in the 89th minute.

Stanley Alves took the penalty kick. It was saved by goalkeeper Austin Aviza.

Orlando (1-8-3) eventually got on the board in stoppage time, during the third of four extra minutes. Jonathan Rosales found a flashing Wilfredo Rivera in front of the goal, and Rivera nudged the ball into the left corner.

But Richmond locked up the victory shortly thereafter. It was a rebound performance for the club, after suffering its worst loss of the season at home Saturday, 4-0 to New England Revolution II, and important for the ongoing race for a spot in the league final.

“As we hit the stretch run here, guys are going to have to decide how badly they want it, on all of these teams,” Sawtazky said.

“And I think, out of this game, you’re doing to see a bit of fire bubbling up in these guys.”

One of the year’s best feel-good stories has met the cold realities of the NFL.

To keep Brandon Scherff, Washington may have to first let him go

Coming off yet another elite season, the former No. 5 overall pick will almost certainly become the highest paid guard in football.

First the "Redskinettes" and later "The First Ladies of Football," for the first time since 1962 the Washington Football Team won't have cheer…

"There cannot be healing for any of us without understanding the truth, which will provide confirmation that we are not alone, and that our allegations are supported by others."

With the announcement, the tournament has now crossed the $5 million mark in giving over the course of its five-year run in Richmond.

Hallman: A little rain on road courses is no reason for big caution calls

Michael Vick is known as one of the greatest college quarterbacks, but he was never able to set Virginia Tech's record for most rushing touchdowns by a quarterback in a season.

Hallman: McDowell didn't cause crash that led to Daytona victory

Right off the top, let’s establish one thing. Michael McDowell, surprise winner of the Daytona 500, did not do anything untoward on the final …

The Kickers’ Jonathan Bolanos followed up his first goal as a pro Wednesday night with a second score, this time via the penalty spot. He sent his PK down the middle of the goal and past a diving keeper to give Richmond a 2-0 cushion.

The Kickers were strong defensively Wednesday night, nearly securing their fourth clean sheet of the season until conceding late.

Kickers’ Ivan Magalhaes is behind Orlando’s Wilfredo Rivera as he plays it off his chest during the Kickers game on Wednesday, Oct.7,2020.

Kickers’ Ryley Kraft muscles Wilfredo Rivera for the ball during the Kickers game on Wednesday, Oct.7,2020.