Subscribe
Read Today's E-Edition
Share This
Carson Wentz thankful for 'wild ride' in Philly, which he says helped him grow as a person
0 Comments
Share this
Presented By

The end came abruptly in Philadelphia for Carson Wentz.

Now, heading into his first matchup against the team where he was drafted No. 2 overall and was part of a Super Bowl-winning squad, he said he looks back with gratitude.

“I definitely cherish my time that I had up there,” he told reporters on Wednesday. “It was definitely a wild ride in many, many ways. I grew a lot as a man, got married, had a child, a lot of things. So I’m very grateful for my time there, but it definitely does catch you off guard. Things change, and you’ve got to learn to grow up and change and adapt.”

Wentz arrived to the Eagles fresh out of North Dakota State but now is an NFL veteran who will turn 30 years old in December.

“Your perspective changes when you grow up, you get married, have a kid. I think your perspective on life changes — on your job, on work, on everything,” he said. “I think there’s always things I look back on, ‘Man, I could have been better here — as a person, as a teammate,’ lots of things that you do take for granted.

“So I definitely thank God for the experiences I’ve had, even though sometimes they’re dark or sometimes they’re not how I envision them to be, but I think it’s allowed me to grow as a person, and I’m thankful for that.”

On Sunday in Washington, Wentz will go head-to-head against the quarterback who replaced him, Philly’s Jalen Hurts, who has had success this season in an offense that has surrounded him with weapons.

Hurts and Wentz overlapped for a year in Philadelphia before Wentz was traded to the Indianapolis Colts, where he lasted a year before being sent to Washington.

On Wednesday, Hurts told reporters in Philadelphia there was and is a “mutual respect” between the two but didn’t want to talk further about their relationship, adding, “I’m focused on the now.”

The now in Washington is an offense that’s off to a strong start under Wentz, with rookie receiver Jahan Dotson in particular benefiting from the quarterback’s arm.

If there has been any buyer’s remorse, Commanders coach Ron Rivera isn’t sharing. He said if anything, the best is still to come.

“To be honest, we as a team I think are still finding our way with him, just learning what he’s capable of and learning how he helps us as a football player,” the coach said. “I think as we continue that we’ll continue to have good things happen for us.”

Wentz said the key to that success will be finding consistency. Last week against the Lions the offense was explosive in the second half, but first-half struggles ultimately dug a hole too deep to climb out of.

Finding that consistency is a burden Wentz shoulders with enthusiasm.

“It’s been a lot of fun,” he said of his time so far in Washington. “It’s a younger team, with a lot of guys that are hungry. Hungry to win. Hungry to find success and to sustain that success, so it’s been fun being a part of it, kind of having a different leadership role being one of the older guys in the locker room.

“I think we’ve shown we’re capable of being an explosive offense with the way we can spread the ball around and create mismatches, you know, kind of all over the field. I think we’ve got a lot of speed, a lot of playmakers that make my life easier.”

Much more like football weather both Thursday and Friday nights 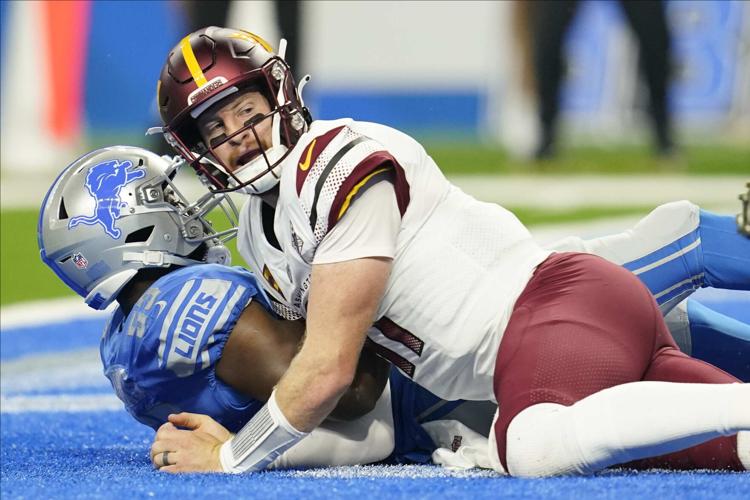 Commanders QB Carson Wentz says he’s working to improve his consistency, but he said the offense has shown it can be “explosive.” 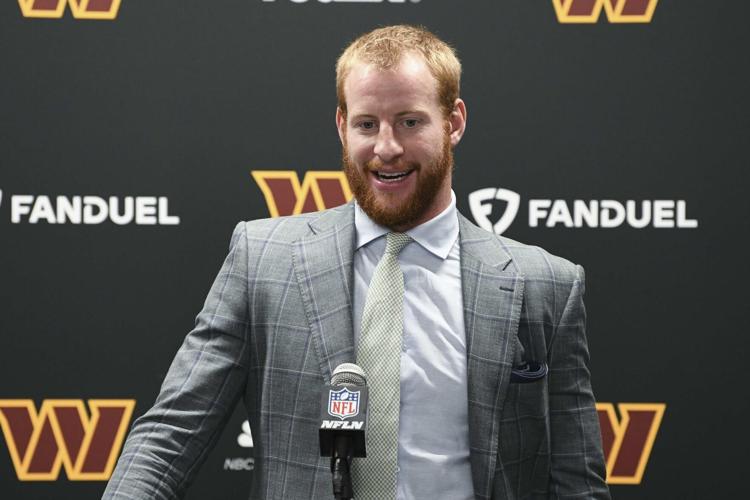 Carson Wentz played for the Eagles for five seasons after being selected No. 2 overall in the 2016 draft.