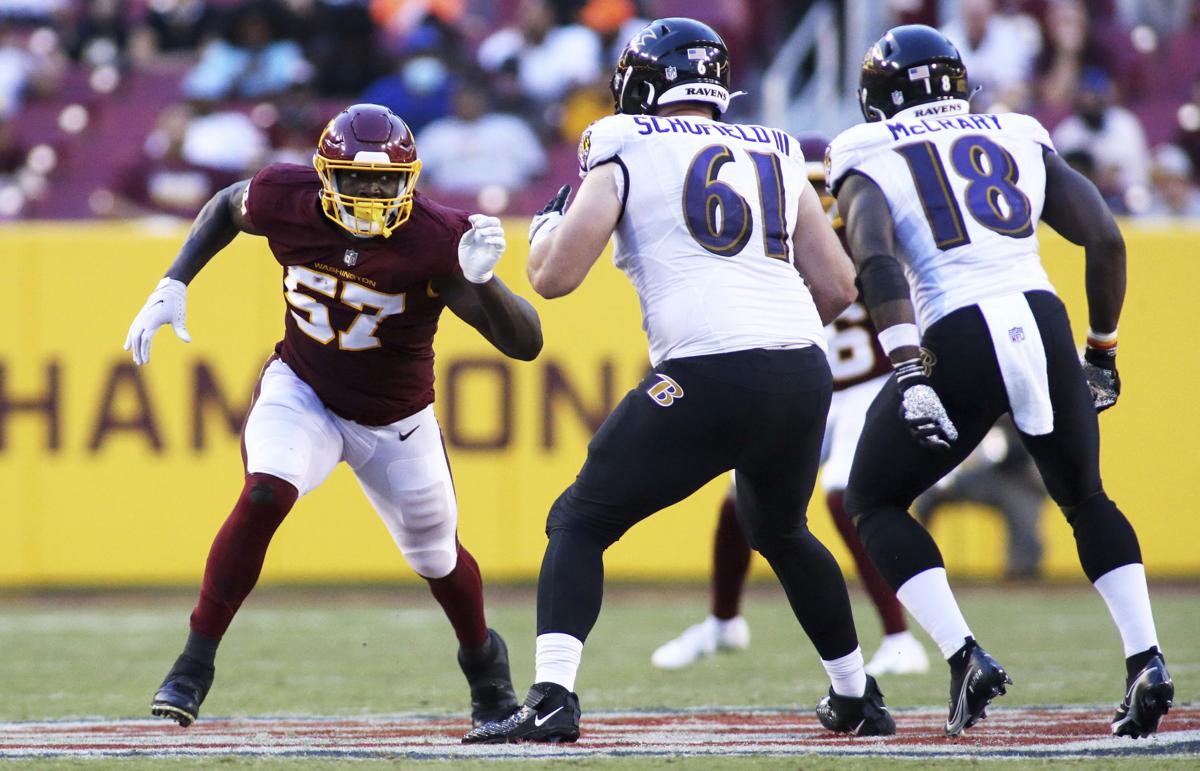 Bunmi Rotimi (57) rushes against Baltimore in a preseason game earlier this year. 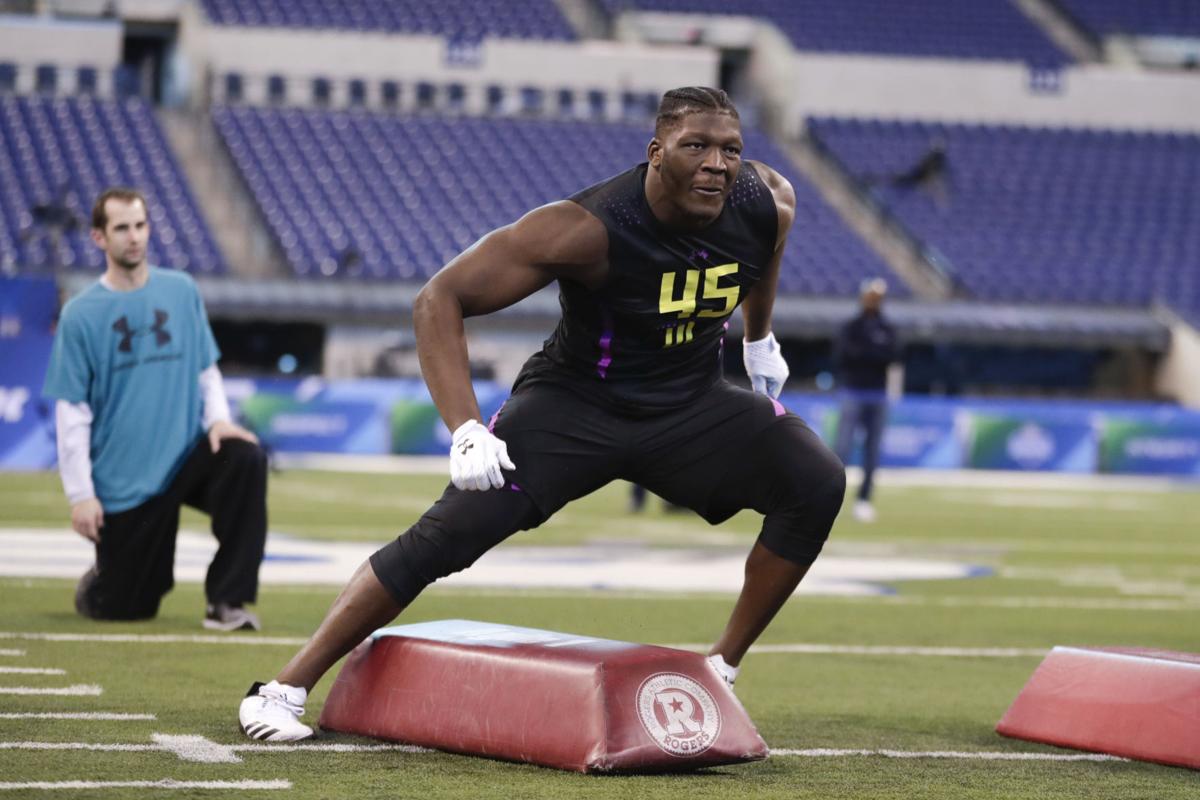 ASHBURN — Have you heard the one about the football player from Old Dominion who went ignored by the NFL for several years, played in the XFL, then finally got his opportunity with the Washington Football Team?

This isn’t Taylor Heinicke, though. It’s pass rusher Bunmi Rotimi, whose story may be even more improbable than Heinicke’s.

Rotimi, the son of Nigerian immigrants, grew up in a household that wasn’t crazy about sports. But at Alexandria’s West Potomac High, classmates and coaches told him he’d be a natural at football.

He was, indeed, a natural, but his late start meant colleges were hesitant to take a chance on him, and he did not receive any Division I scholarship offers, so he walked on at ODU.

He spent two seasons at defensive tackle before moving to defensive end. Despite a number of injuries, he still compiled 19 career sacks for the Monarchs — enough to earn an invite to the NFL combine.

Rotimi (his name is pronounced BOO-me ROH-tee-me, and his full first name is Olubunmi) was invited to offseason workouts with the Bears in 2018 but was released before the season.

He spent 2019 with the Arizona Hotshots of the AAF and 2020 with the New York Guardians of the XFL. Both leagues folded. Rotimi was undeterred.

“Throughout everything, you know, I’ve just never really felt that I can’t do this,” he said. “So it’s just, every time I play, I love it more and more and more. And I just don’t want it to end. And now thankfully I’m here and I’m grateful for it.”

Rotimi was a summer addition to Washington’s roster and was sent to the practice squad on cut day. But with injuries to Montez Sweat and Chase Young, he’s now finally getting his NFL opportunity, four years after graduating from ODU.

He was called up to Washington’s active roster on Saturday and played eight defensive snaps in the win against Tampa Bay. He’s expected to play again on Sunday in Carolina.

“It’s been humbling, that’s the best way to put it,” he said. “It’s just been constant faith, since you just never know. I did three different leagues, and two of them, the AAF and XFL, both had early ends, so you just never know when your next opportunity is going to be.

“So it has really just been about keeping faith, and it has really been a humbling process, and now I’m just grateful for all of it.”

Bunmi Rotimi (57) rushes against Baltimore in a preseason game earlier this year. 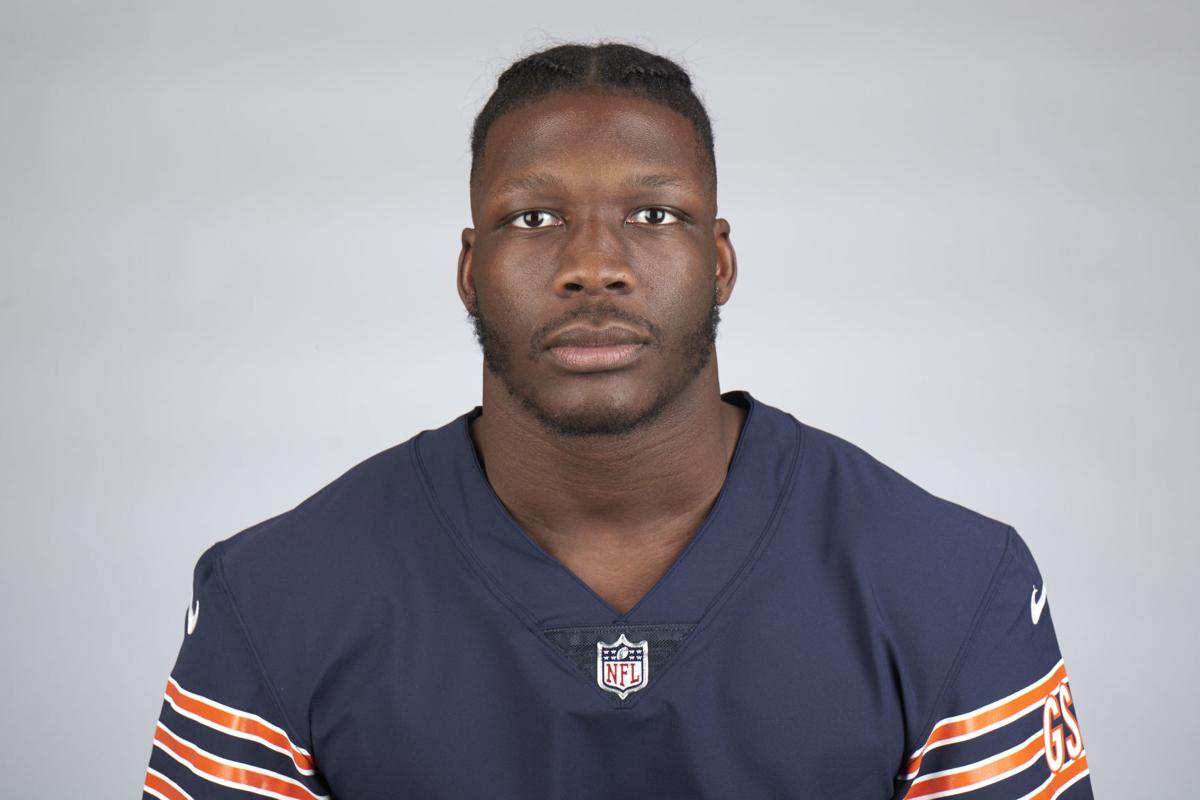