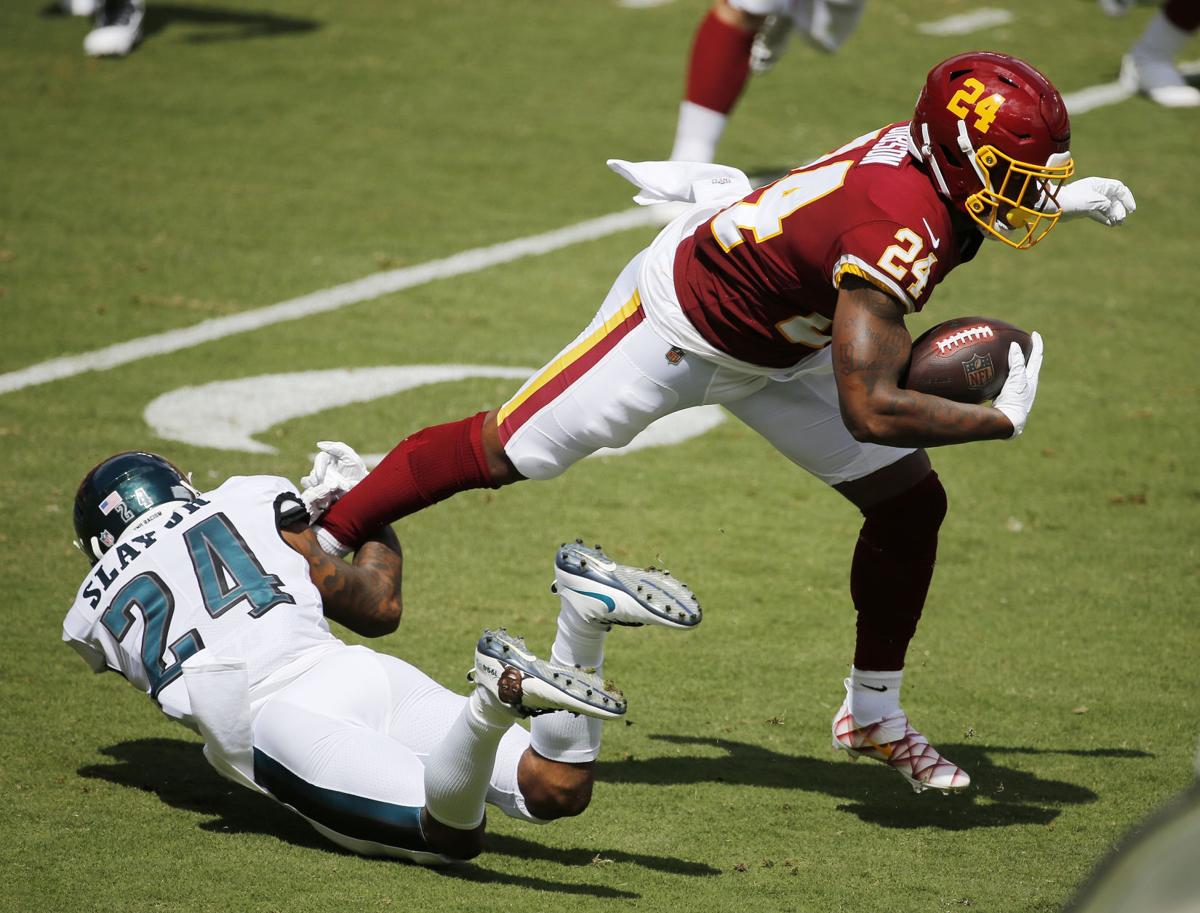 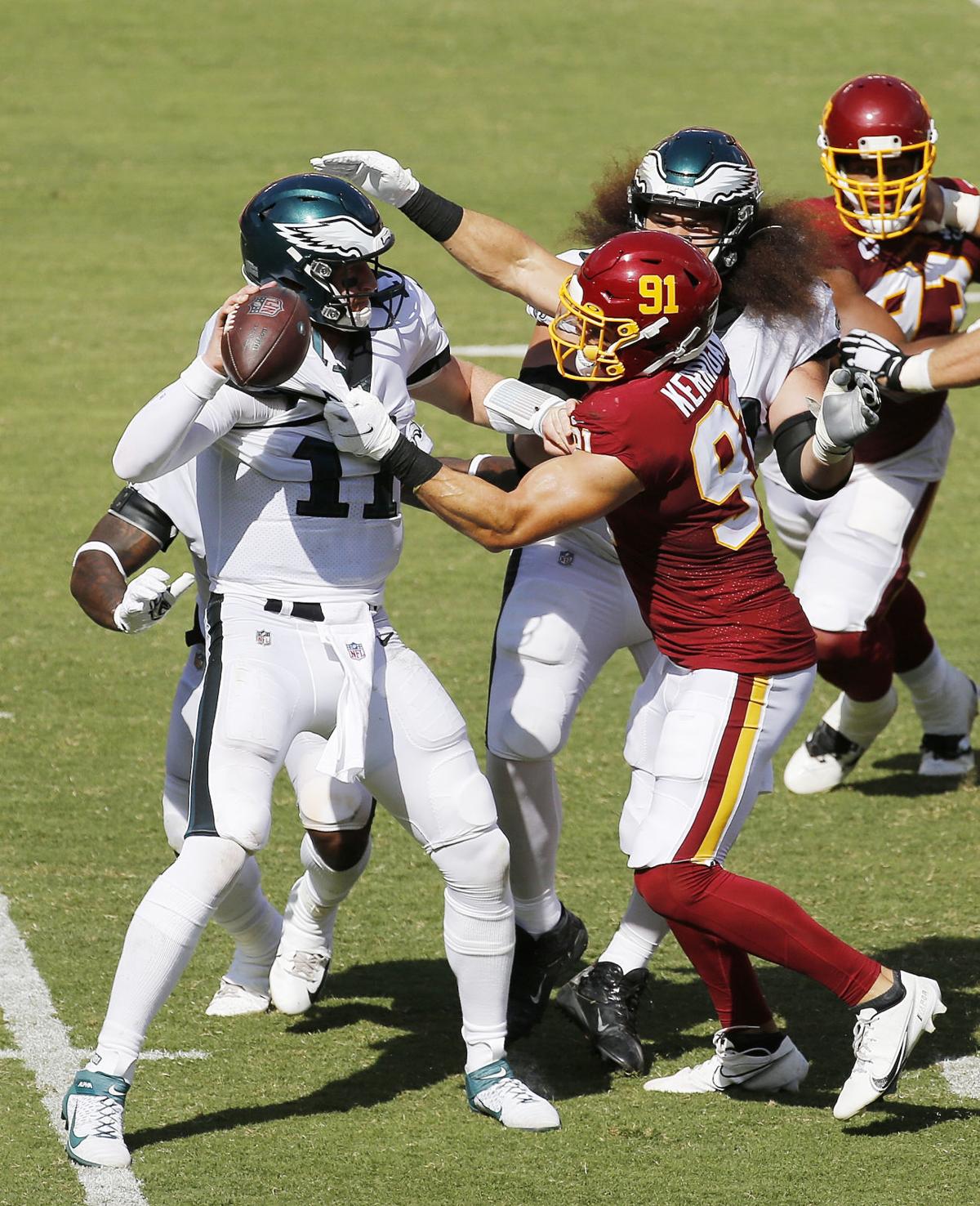 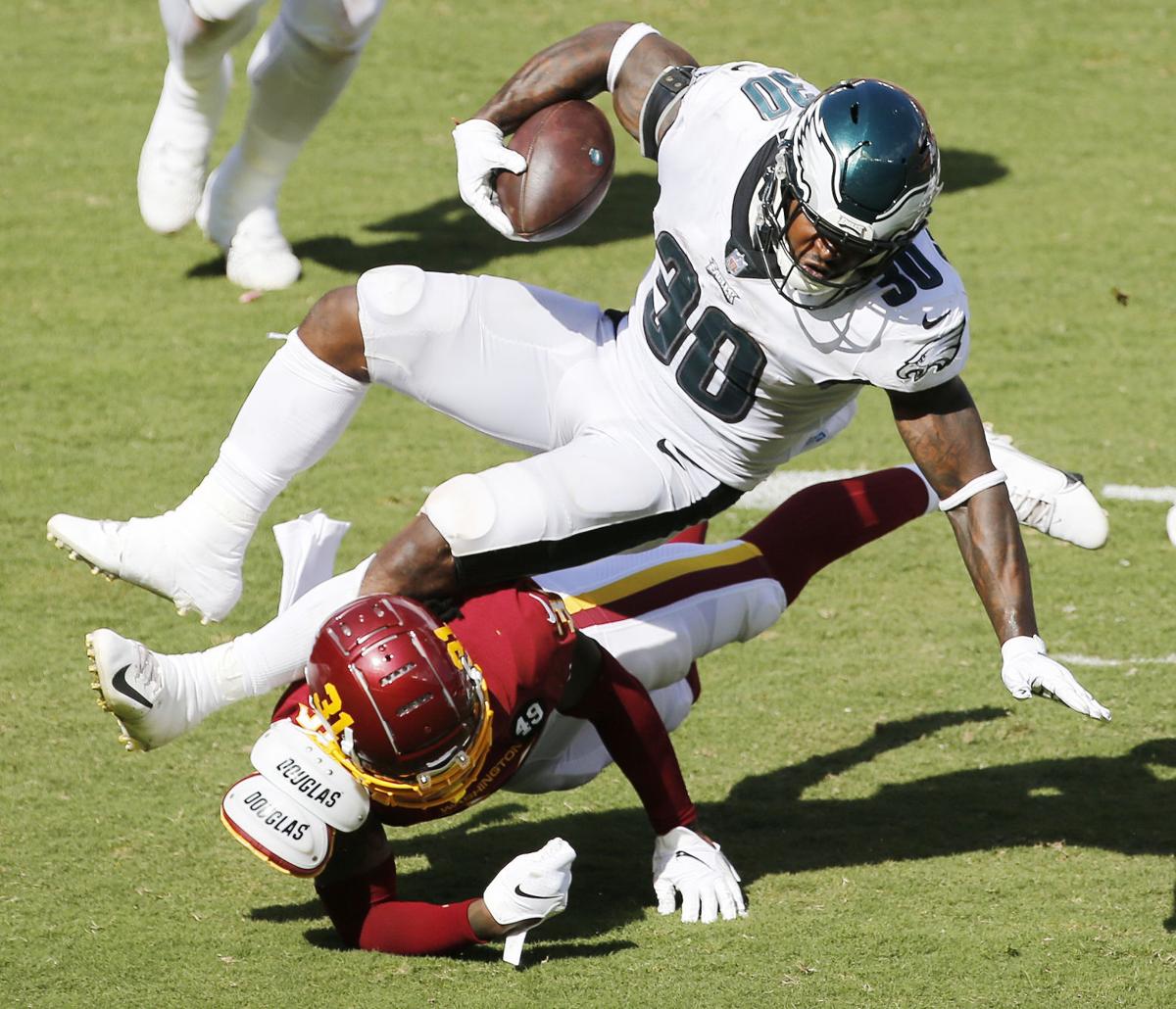 LANDOVER, Md. — Ron Rivera has often said changing the culture in Washington will take at least three years. Some of his players seemed to have picked up on the message much quicker.

Down 17-0, Washington scored 27 unanswered points to stun the Philadelphia Eagles 27-17 in the season opener on Sunday at FedEx Field.

In the first half, Washington looked like the Redskins, committing dumb penalties and giving Philadelphia life on third-and-long situations.

They then turned the corner and became the Washington Football Team, showing what Rivera wants them to become with a mix of toughness, leadership and opportunistic play.

It started at halftime. Rivera, who is undergoing treatment for cancer, received a planned IV to ensure he wouldn’t fall ill during the second half. In his place, the halftime speech was given by quarterback Dwayne Haskins, who took control of the room and delivered what was described as a “raucous” message.

“We’re the home team, they’re the visitors,” Haskins said, paraphrasing himself. “There’s no reason why we should be feeling like we should be the little bro to them.”

He finished the job, but the defensive line cranked the game to the “easy” setting for him.

“The whole room knows what the potential was, but today they showed it,” cornerback Jimmy Moreland (James Madison) said. “That made it less pressure for us as a secondary, knowing that a quarterback is going to get a little itchy in the pocket knowing our D-line is coming.”

Chase Young got his first NFL sack, arriving to the stadium dressed in a green suit (because Sundays are when money gets made).

If the defense won with star power and big plays, the offense found just enough grit to get the team across the finish line.

With the score 17-17 in the fourth quarter, two decisive moments happened on Washington’s ensuing drive.

Tight end Logan Thomas, a former Virginia Tech quarterback, had to dive to catch a third-and-8 pass short of the sticks, but sensed he hadn’t been touched by the defense, and got up and dived for the extra yard, extending the drive

Then on fourth-and-1 from the Eagles’ 4-yard line, Rivera didn’t play it safe and let his defense win the game — he sent his offense on the field to go big. Peyton Barber got the yard, but Rivera got his message across.

Sunday’s results bought Rivera instant credibility, though sky-high expectations will have to wait.

The Eagles at one point had lost four of their starting five offensive linemen because of injuries, and quarterback Carson Wentz lost all confidence in the group early in the second half.

Still, there is no reason to detract from Washington’s victory — it was equal parts improbable and remarkable, and showed that even if the newly christened Football Team isn’t playoff bound just yet, it won’t be a doormat for better teams to shove aside.

There are also indications that the new coach’s mentality transferred to the players this season, even via Zoom.

Rivera gave the game ball to Kerrigan in the locker room, congratulating him on setting the record. He was then presented with one of his own. He deflected the attention back to the players, instilling one last final bit of confidence on a morale-boosting day.

Dwayne Haskins is making throws few NFL quarterbacks can, but he's also missing the easy ones

"Dwayne is more than capable. If his feet are set and his body is aligned correctly, he can make any throw that there is."

McElroy: Mo Alie-Cox reflects on his 'crazy' journey from hoops to NFL starter

"Sometimes I'll be talking with one of my friends and they’ll talk to me about it and I’ll be like, 'Yeah, this is kind of crazy, right?' I’m kind of not supposed to be here but I am here and I'm actually doing good. So yeah, it's crazy."

Giants would like their Double-A team to remain in Richmond, but nothing's set yet

The San Francisco Giants want to keep their Double-A team in Richmond, and that desire may help resolve which major league organization partne…

"It allows to see that we're all vulnerable and we all have a story. And let's share our story with each other."

Washington defensive end Chase Young injured his groin early in Sunday’s loss, and watched most of the game from the sideline in street clothes.

Ron Rivera says he'll stick with Dwayne Haskins, but there is a 'cutoff point'

"There’s a point where, hey, you know what, you should be more positive with your throwing plays.”