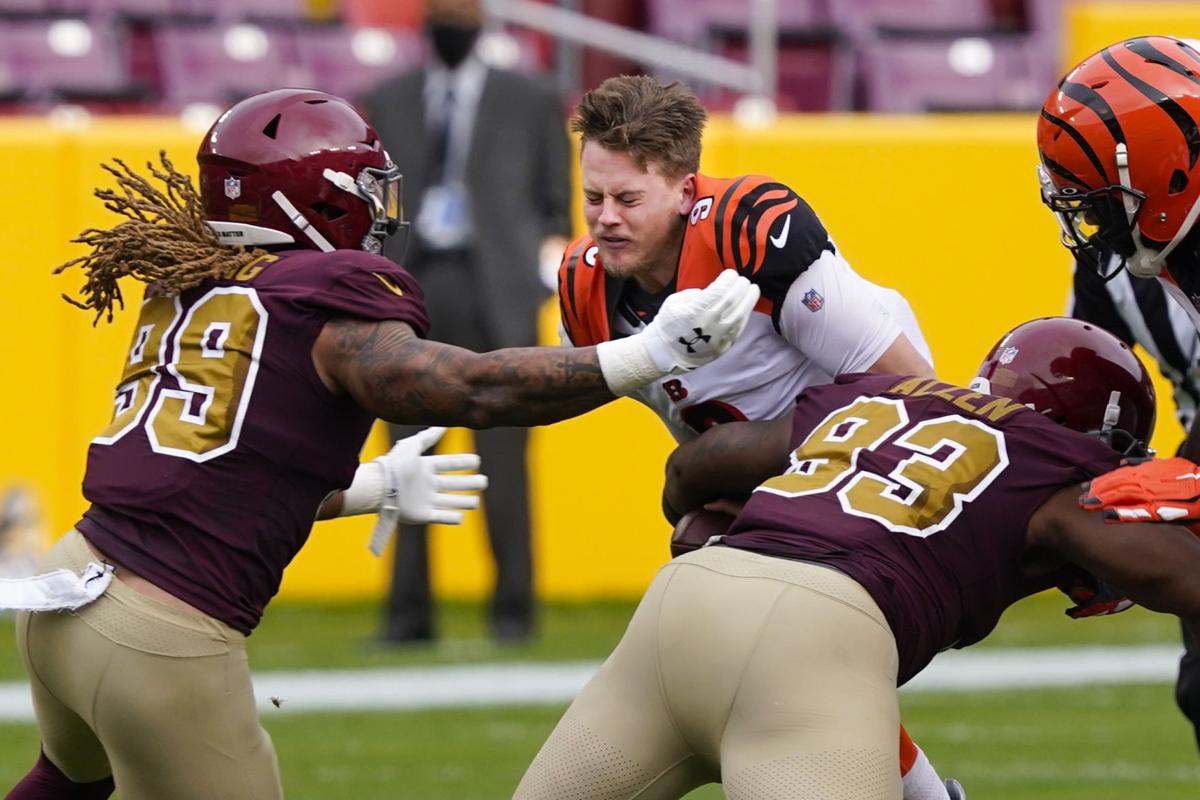 Cincinnati quarterback Joe Burrow loses his helmet as he is tackled by Washington defensive tackle Jonathan Allen (93) and defensive end Chase Young in the first half at FedEx Field in Landover, Md.

Cincinnati Bengals quarterback Joe Burrow (9) shakes hands with Washington Football Team quarterback Dwayne Haskins (7) as Burrows is carted away off the field during the second half of an NFL football game, Sunday, Nov. 22, 2020, in Landover. Burrows left the game with a left knee injury. (AP Photo/Al Drago)

LANDOVER, Md. — A sleepy matchup between a pair of two-win teams was inching toward a forgettable finish, when both clubs’ futures changed in an instant.

“All I heard was a yell, and he was holding his knee,” defensive end Chase Young said.

The yell was Cincinnati quarterback Joe Burrow’s, and it pierced through a gray, frigid afternoon at FedEx Field, as one of the most exciting young players in football was lost for the season with a knee injury.

From that point, the Washington Football Team turned a deficit into an easy 20-9 victory, dominating the second half and giving itself an opportunity to play for first place in the division on Thanksgiving in Dallas.

“Once he left, things kind of slowed down a bit,” Washington cornerback Ronald Darby said of Burrow’s injury.

That success covered over a disappointing first half for the defense, a group that needed a strong showing against Cincinnati. The Bengals went to a quick-throw offense, exposing Washington’s linebackers and secondary.

And so the question lingers, even after the victory: Is Washington a young team on the rise, poised to seize a division that is up for grabs? Or is this the flawed team that has struggled to hold below-average NFL rosters in check?

Burrow’s replacement, former N.C. State quarterback Ryan Finley, was sacked four times, and after the game, the defense chose to see the victory as a step in the right direction.

When Burrow left the game, Cincinnati was winning 9-7 and dominating most statistical categories. Washington had remained in the game thanks to a handful of missteps by the Bengals — they missed a 33-yard field goal attempt, fumbled at the goal line, and missed an extra point try.

At halftime, the time of possession was slanted toward Cincinnati by a 2-to-1 margin.

That changed early in the third quarter. Burrow was planting to throw when Washington defender Jonathan Allen was blocked into his knee by an offensive lineman. Players immediately motioned for medical personnel.

From there, the game turned immediately.

Washington scored a touchdown on its next possession, and as the defense started holding Finley in check, the Football Team’s offense piled up yardage on offense behind running back Antonio Gibson.

“I feel like we fought,” receiver Steven Sims said. “We had a little bit of [trouble], then we got right back after halftime. We focused, we locked in and then we started rolling as we always do.”

Quarterback Alex Smith claimed his first victory in more than two years, under a set of eerie circumstances. Burrow’s injury cast a similar pall over the proceedings, and Washington was wearing the “throwback” jerseys that were worn the day Smith was injured.

“The last time I wore them, I got them cut off of me in the ambulance,” Smith noted, adding that he likes the design, and he’d been eyeing them all week in the equipment room.

From here, both teams’ futures diverge sharply. Cincinnati seems likely to secure a top-three pick in the NFL draft, barring a stunning turn of events from Finley.

Washington sits a half-game out of the NFC East race, and if the Football Team can defeat Dallas on Thanksgiving, it can plausibly start talking about a playoff berth.

Whether Washington can do that depends in large part on which defense shows up Thursday — the one that pushed opponents around early in the season, or the one that has been picked apart by short passes for the last three weeks, negating the advantage of the team’s formidable front four.

“We gave up some yardage early in the game in the first half, but ultimately bent but didn’t break,” defensive end Ryan Kerrigan said. “Then in the second half, I liked what I saw a lot more.”

The Bengals had opportunities to do the breaking but couldn’t take advantage, then were gutted by Burrow’s injury.

But for Washington, a win is a win, and confidence isn’t a bad thing, no matter how it was acquired. Now, it’ll be put to the test under a national spotlight.

It's the 3-win Cowboys vs. 3-win Washington on Thanksgiving. And first place is on the line. Must be 2020.

"It's reason for guys to come show up and prepare and get ready and see what happens."

Dallas Cowboys expected to have more than 30,000 fans at stadium for Thanksgiving game against Washington

Varina's Maurice Canady chose to sit out the NFL season, but he's continuing to work in his community

"You have people on one side who are like, 'Oh, you don't love football because you didn't go play.' Other people look at it and say, 'He's a smart young man.' There's no in between."

Cincinnati quarterback Joe Burrow loses his helmet as he is tackled by Washington defensive tackle Jonathan Allen (93) and defensive end Chase Young in the first half at FedEx Field in Landover, Md.

Cincinnati Bengals quarterback Joe Burrow (9) shakes hands with Washington Football Team quarterback Dwayne Haskins (7) as Burrows is carted away off the field during the second half of an NFL football game, Sunday, Nov. 22, 2020, in Landover. Burrows left the game with a left knee injury. (AP Photo/Al Drago)