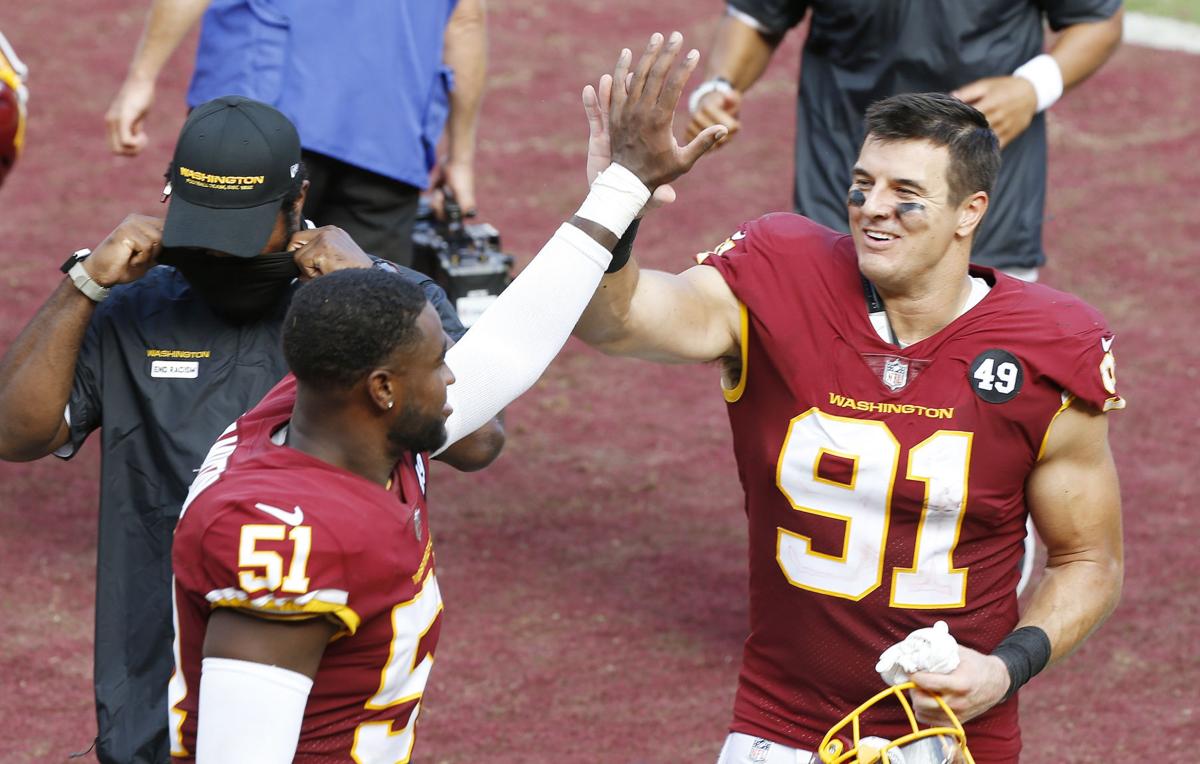 Ryan Kerrigan (91) and and Shaun Dion Hamilton celebrate as they leave the field Sunday. 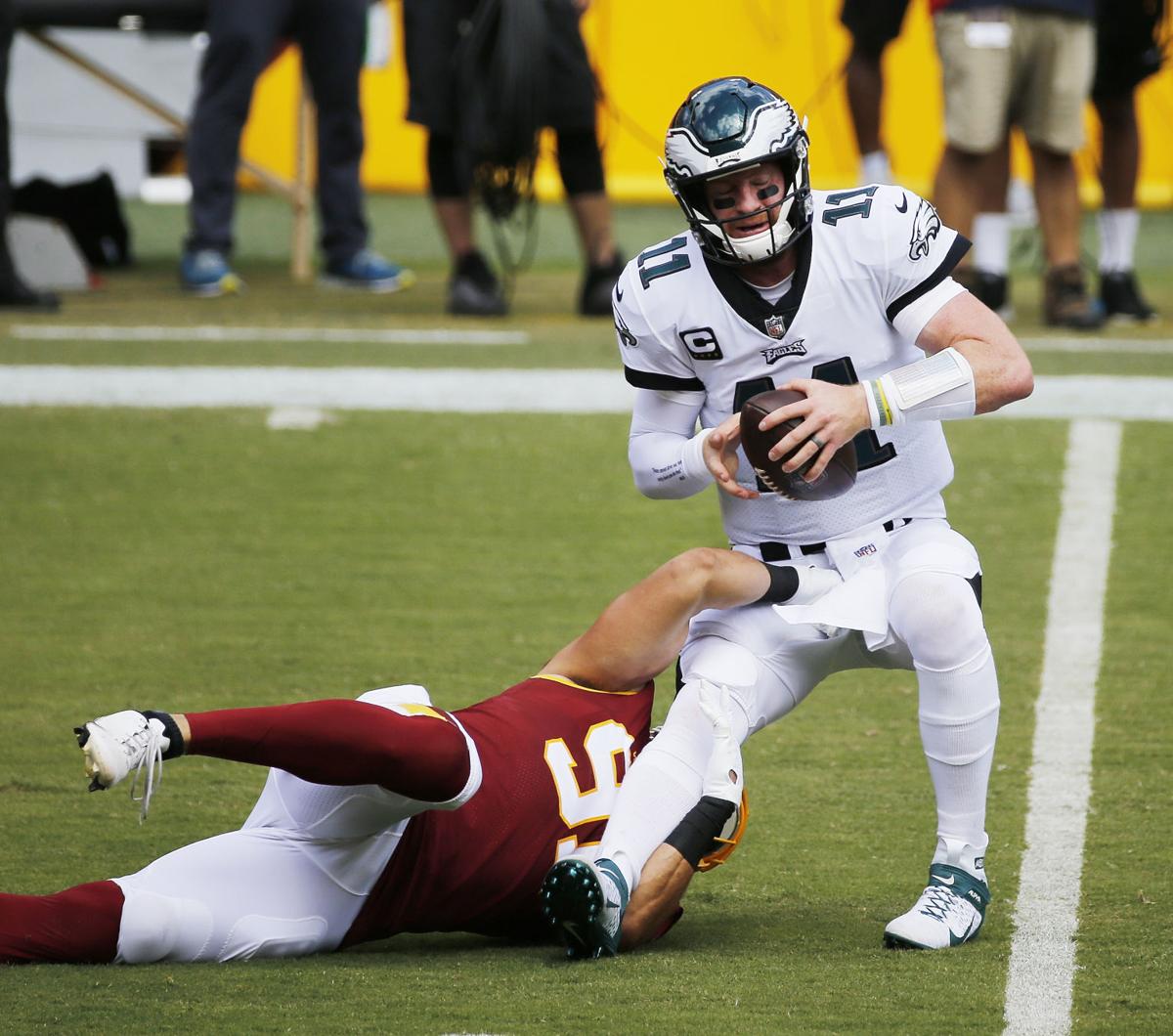 Sometimes the kindest words about a person are said at a retirement party or eulogy.

Why is that? Do we feel awkward paying a compliment in a world where it’s so easy to fire off a complaint?

Not often does somebody write a column of appreciation when a player is named NFC defensive player of the week, but Ryan Kerrigan deserves it.

Last Sunday, Kerrigan tied and later passed Dexter Manley to become Washington’s all-time sack leader with 92. His two sacks, two quarterback hits and fumble recovery in only 22 snaps garnered him the NFC accolades for the first time in his 10-year career.

Upon reading that part of the press release, I pondered how after 10 seasons, 439 tackles and 92 sacks, and at one point, 139 consecutive games, this was the first time Kerrigan received this weekly honor?

It’s because he’s played in Washington, where he’s been part of some bad teams and some bad defenses. For most of his career, the only thing offensive coordinators feared about Washington was Kerrigan.

His nine teams have posted a 56-87 record and zero playoff wins. Let’s not leave out the countless times he’s had to answer questions about embarrassing losses, a fired head coach or defensive coordinator, another losing season, or his reaction to another dysfunctional moment in the organization.

Yet never has there been a negative word from Kerrigan. He has handled every situation with class, staying loyal to the team that gave him an opportunity in the NFL.

His character and class go beyond the field to being a dad, husband and the founder of his “Blitz for the Better” foundation. There are countless other character moments from Kerrigan outside the spotlight. An example occurred in 2018 when he took time on his off day to attend the funeral of longtime Washington football reporter Rich Tandler.

Last season, Kerrigan told me why he’s remained loyal to the team that drafted him.

“Not to get too religious, but I’m really blessed,” he said. “I feel like God has given me an incredible gift and an incredible life to be a professional athlete, and I want to maximize the talents he’s given me and make the most of this career. When I think back on my career, it’s kind of been a dream. I’ve come to a city that’s really embraced me. I’ve come to a city that I’ve really loved living in and an organization I really love playing for. I just want to keep it going as long as I can. That’s what motivates me.”

Motivation has never been a question with Kerrigan, but this offseason there were questions about his status after the team selected Chase Young in 2020 and Montez Sweat in the previous draft.

Would Kerrigan start? How much would he play? Would he be traded with just one year left on this deal?

Kerrigan remained in Washington but with a new role on the field, taking fewer snaps. However, his value to the culture Ron Rivera is trying to establish in Washington cannot be measured.

“When you ask people to describe what that guy is, I promise you that they’ll probably say he’s a true pro,” Rivera said. “He understands what it takes to prepare each week [both] physically and mentally and because he does that he has success.”

This season could be Kerrigan’s last in Washington. His snaps will be limited, which could make him more effective as the season progresses. Either way, you’ll never hear him complain or question the plan.

He’ll just continue to do what he’s done for the previous nine years: take every opportunity to drop the quarterback and be a stand-up teammate.

There’s no denying last Sunday the addition of Young and the emergence of this front four including Jonathan Allen and Daron Payne forced Philadelphia to shift its attention to someone besides Kerrigan. That allowed Kerrigan and others on Washington’s defense to reap the benefits.

In the bigger picture, if Young and the rest of this defense learns from Kerrigan, the unit and the team will reap the benefits for years to come.

For Logan Thomas, learning to play tight end has been accelerated by starting in Washington

"I think people on the outside can now see what we feel on the inside, of team camaraderie and just really getting to know each other - and I think that's why we're starting to play better."

A crucial stretch for Washington will be played under unusual circumstances

Five games remain for each of the three teams atop the NFC East, and with a brutal schedule on deck for each, two wins might be enough to take…

"The one thing I don't want to do is tell the play caller what to call."

Mike “Doc” Emrick sits down with Wes McElroy to discuss recently announcing his retirement, when he fell in love with hockey, his favorite mom…

Ryan Kerrigan (91) and and Shaun Dion Hamilton celebrate as they leave the field Sunday.