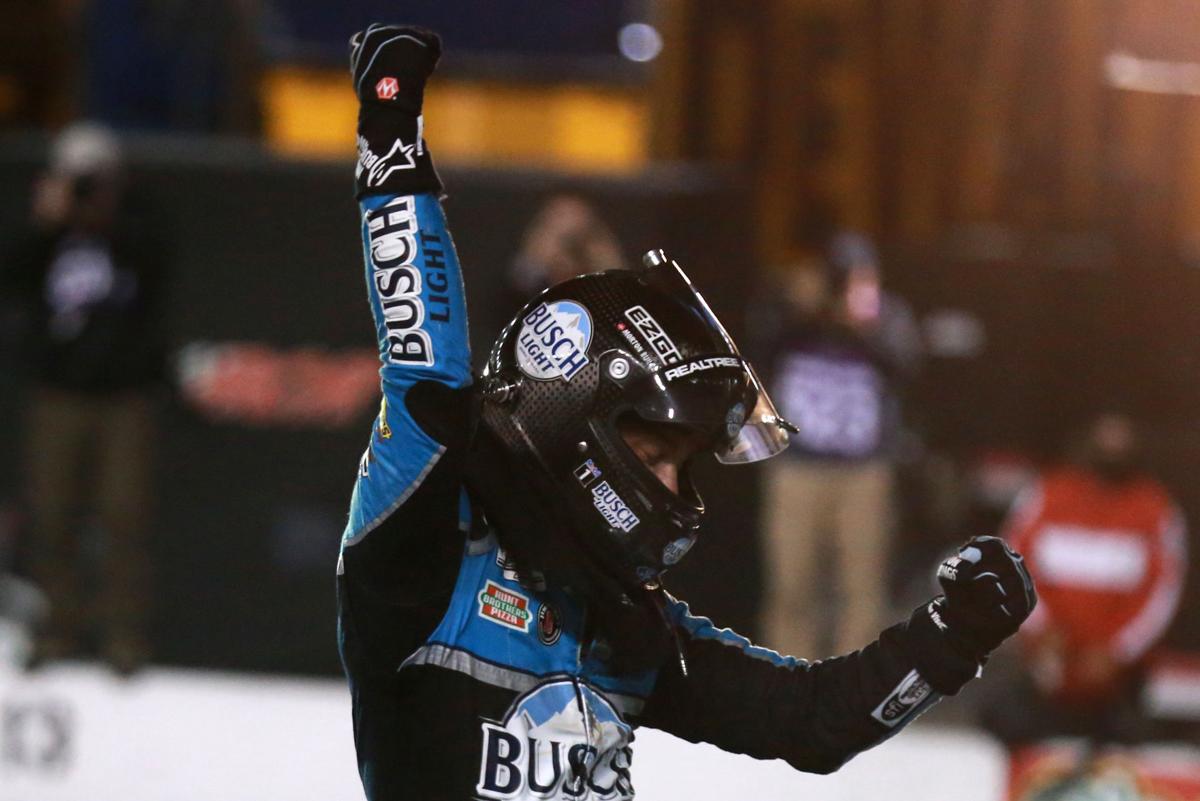 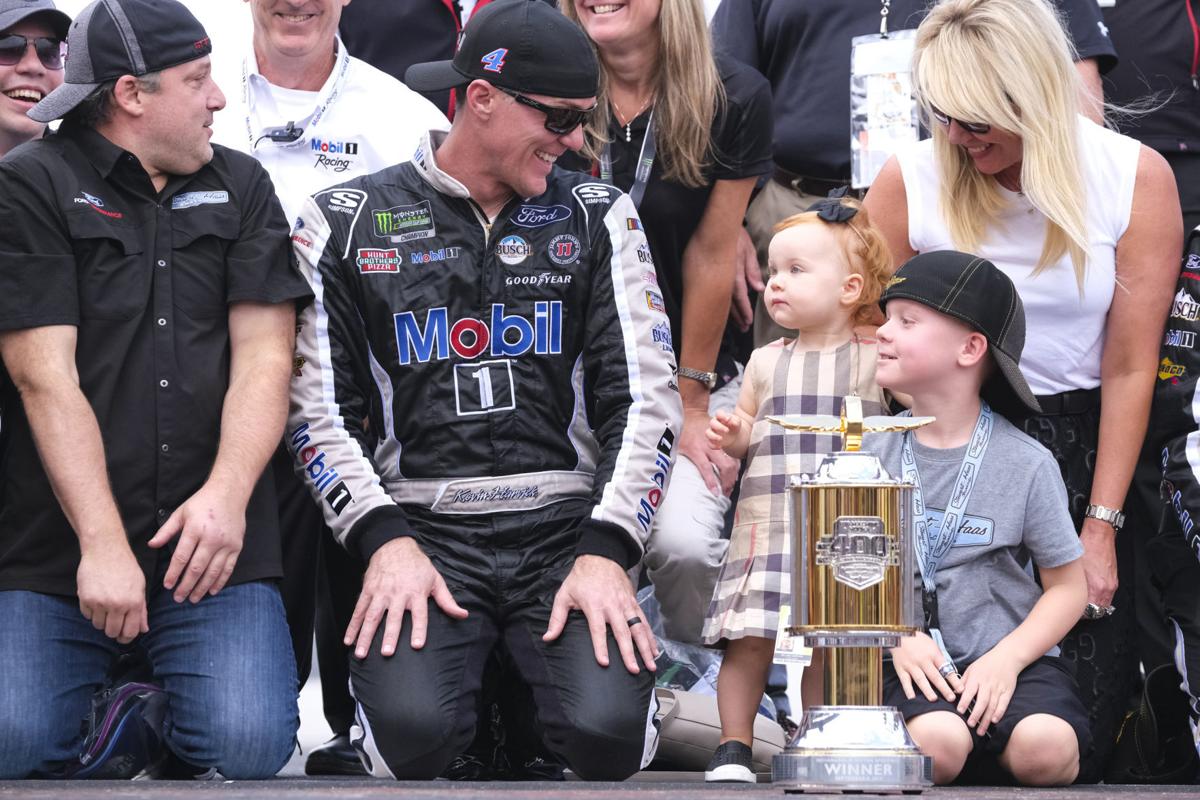 Kevin Harvick, seen with wife DeLana and children Piper (left) and Keelan, has rediscovered the joy of racing through introducing his kids to go-kart riding. Piper is now 3 and rode with a modified setup that allowed Harvick to control the steering.

By Aaron McFarling The Roanoke Times

Kevin Harvick had his reservations.

With his son, Keelan, the instructions for his first go-kart drive had been simple:

But with his 3-year-old daughter, Piper? Harvick wasn’t so sure. A buddy at the race shop had to convince him that now was the time to introduce her to the family passion.

So they built a custom kart for her, put her in a helmet and, last week, let her go in the driveway, with dad standing on the back to help her steer.

“When I started that thing up and took off with her, she laughed and giggled the whole time and had a smile from ear to ear on her face,” Harvick said Wednesday. “Just another reminder of how much joy racing and teaching can bring to somebody. And sometimes you need those kids to remind you.”

Like when you’re in the midst of a three-race run of short tracks that aren’t exactly circled on your calendar. The Bristol dirt race was more fun than Harvick thought it would be, but it was still a battle just for him to finish 15th.

And then this past weekend at Martinsville, Harvick got shoved and shuffled constantly before fighting his way to a ninth-place finish, leaving him eighth in the standings as the Cup Series heads to Richmond this week for the Toyota Owners 400.

“It was an interesting race,” said Harvick, who nearly went a lap down during a long early green-flag run Sunday. “We got beat around and didn’t make very much ground on the restarts. There at the end, the one restart that I felt like we did really well on, they all piled up behind us, so it was an interesting day.

“But those are the kind of days that we’ve had all year. I think for us, the speed in our cars just hasn’t been where we wanted it to be, and we’re trying to cure some problems that we’ve had internally with our cars. I think our team has done a really good job of capitalizing on just trying to get OK days and making sure that we don’t beat ourselves and just kind of get through this little stretch.”

The beginning of this season reminds Harvick a bit of 2017, when his Stewart-Haas Racing team switched from Chevrolet to Ford and spent six weeks or so trying to adjust. They figured things out that year, and chances are they will again.

Harvick, 45, has made the Championship 4 five times since the format’s inception in 2014 — the year he won his Cup title. He ranks ninth on the all-time list with 58 victories in NASCAR’s top tier.

After winning nine times last season, Harvick is still seeking his first victory of 2021. The only race he really wishes he had back was Las Vegas, where he started on the pole and finished 20th.

“But the for the most part, we’ve done a really good job of having mediocre speed but luckily having a great team and people around us making great calls with pit stops,” he said. “We’ve been dotting all the I’s and crossing all the T’s to at least get something out of the weekend so that when we get to where we need to be, we’re not in such a hole that we can’t dig out of it.”

Most of Harvick’s free time is spent with wife DeLana and his two budding racers. At first, he didn’t want his kids to have any involvement with racing. But once Keelan expressed an interest, there was no going back.

“Keelan really helped remind me of my passion for racing and how much I love being around the sport,” Harvick said. “Being at the go-kart track with him and watching those kids learn — not only him, but watching the other kids learn, as well — you understand why you actually enjoy racing.

“That was a solid reminder for me, and it made me realize there’s no reason to fight that. Racing is a family sport. It’s given me everything that I have in my life. I’ve been fortunate to make a great living at this. It’s a great environment to grow your family up around.”

And it helped them get through the pandemic in the most “normal” way possible. Last summer, 8-year-old Keelan won his first go-kart race at the GoPro Motorplex in Mooresville, N.C.

Fatherly pride swelled even further on Monday, when Harvick allowed Piper to make her first solo run in her kart.

“Every day she gets a little bit braver.”

And his reservations get fewer.

Dale Earnhardt Jr. will run in the NASCAR Xfinity Series race at Richmond Raceway on Sept. 11 in remembrance of the 20th anniversary of the 20…

Kevin Harvick, seen with wife DeLana and children Piper (left) and Keelan, has rediscovered the joy of racing through introducing his kids to go-kart riding. Piper is now 3 and rode with a modified setup that allowed Harvick to control the steering.