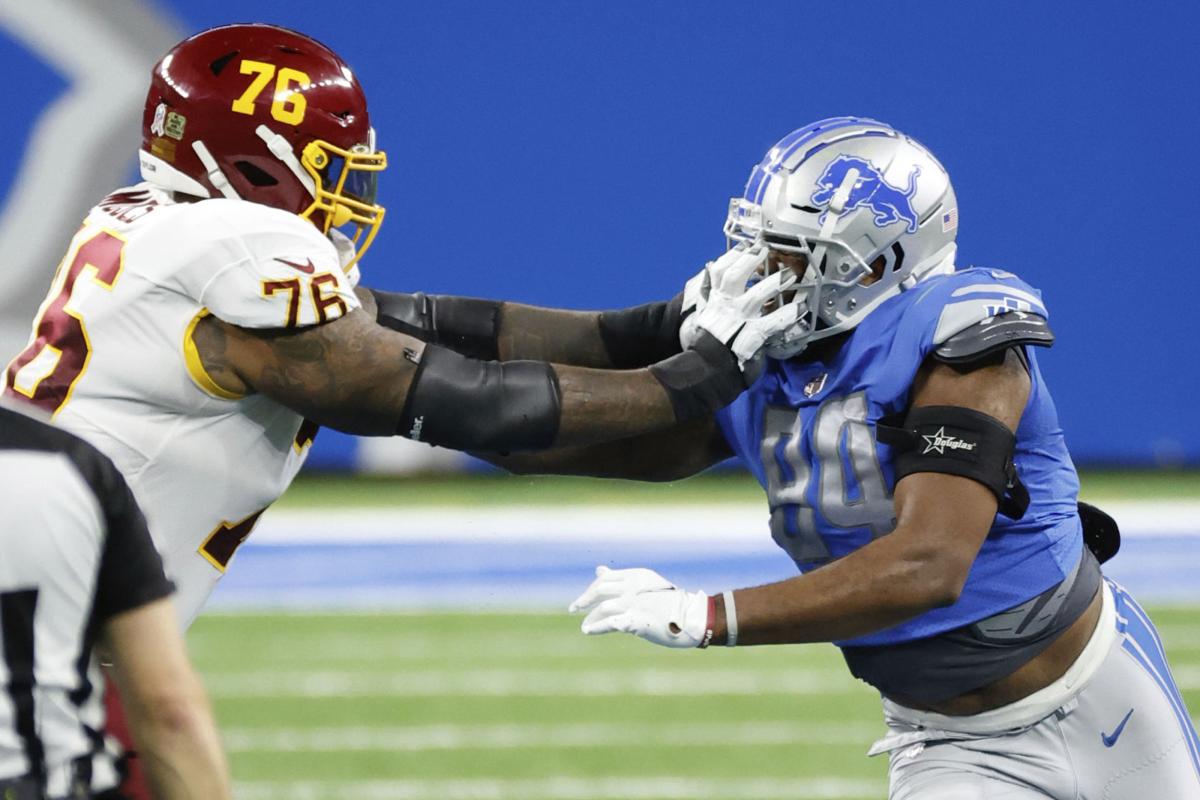 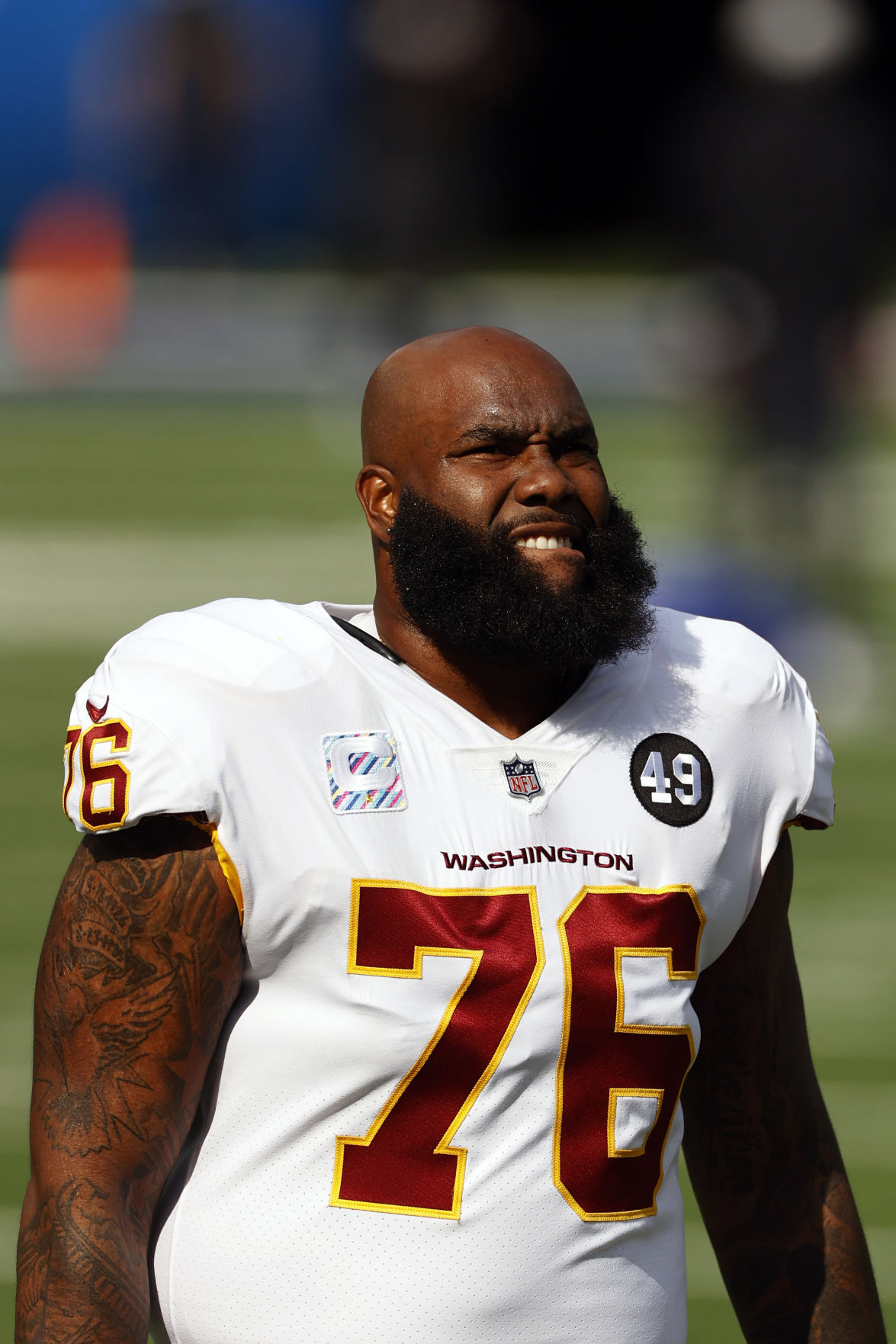 Morgan Moses (Meadowbrook) had to move from right tackle to left tackle for the Washington Football Team in the second half last week after Cornelius Lucas was injured. Lucas was replacing Geron Christian. 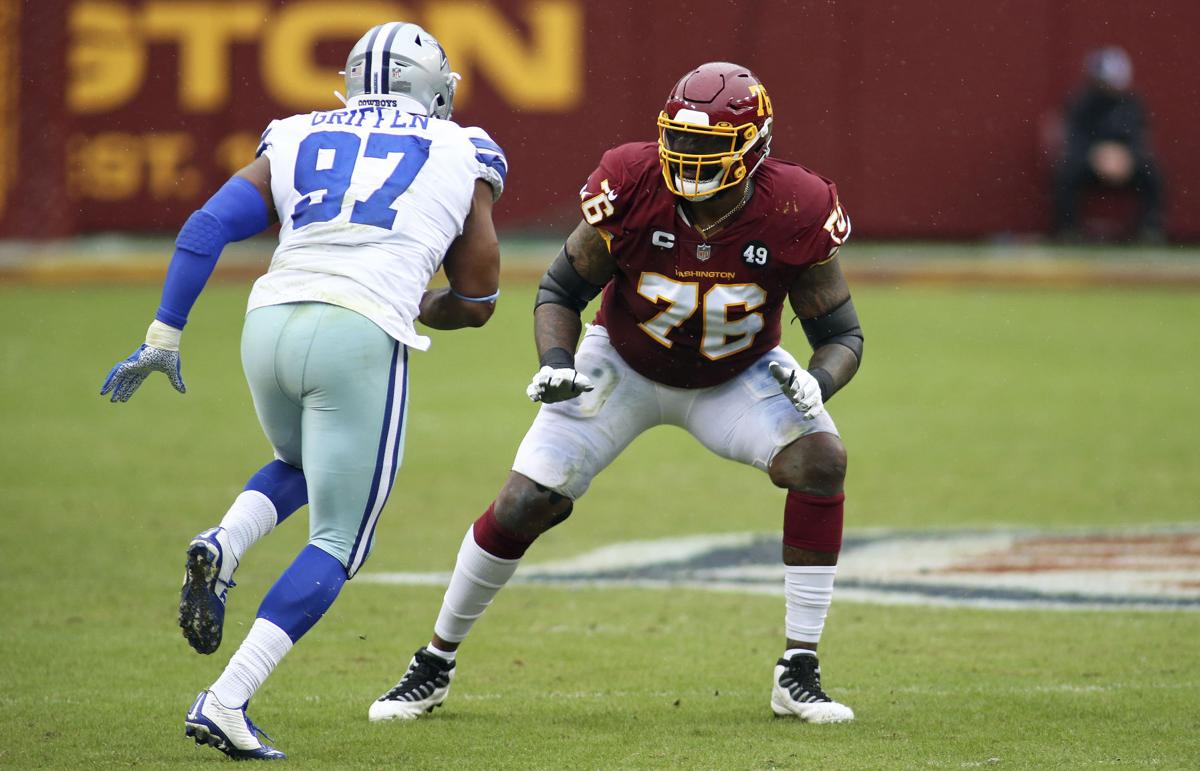 Morgan Moses is a seven-year NFL veteran, but he’ll see the game from a fresh perspective on Sunday.

Due to injuries, he’ll move from his traditional right tackle spot to start at left tackle. This will be his second start at the position, the other coming in 2014.

Moses, a Meadowbrook High and UVA standout, has the physical skills to play the other side of the line but said extra practice has been crucial.

“It’s like writing, if you’re really right-handed and you have to write with your left hand,” he said. “Just being able to see all these defenses numerous times throughout the week, and throughout my career, is making me feel comfortable with it.”

The left tackle position is considered one of the most important in football, since it protects a right-handed quarterback’s blind side, where he can’t see the pressure coming.

That’s why Moses will be sliding over, since the team’s only other option on the roster, David Sharpe, is inexperienced and struggled in limited action at right tackle last week.

The shuffle happened after Cornelius Lucas went down with an injury. Lucas was backing up starting left tackle Geron Christian, who was moved to injured reserve this week.

“I knew I was the emergency tackle, so I’ve been trying to prepare myself,” Moses said.

Still, when Lucas went down in the second half, the switch came abruptly.

“Man, I probably had a couple of ‘Come to Jesus’ talks with myself before that first snap at left tackle,” Moses said. “You’ve got a player lying on the field for an injury, you’ve got some time, so I had some self-talks to myself, and I was able to get it done. Obviously in the heat of the game they’re depending on you to come in the game and play well.”

Moses has been Washington’s most dependable player in the past six years, which is good, because things get even bleaker if he or Sharpe gets injured.

Washington likely will elevate practice squad tackle David Steinmetz, a second-year player out of Purdue, to serve as insurance. It’s also possible that guard Brandon Scherff, who has some experience at tackle, would slide to the outside. Coach Ron Rivera didn’t tip his hand on Friday.

Rivera said making sure the players communicated was the most important thing.

“A lot of the times between Brandon and Morgan, they really don’t have to say much because they’ve been with each other such a long time,” the coach said. “On the other side, the communication with Wes [Schweitzer] has to be really, really good.”

Moses was asked: If things go well, could this be a precursor to him permanently moving to the left tackle position?

“You’d have to talk to Brandon about that,” Moses said, referring to his longtime partner on the right side. “For me, it’s just playing football. It’s a need right now for the team, so whatever coach needs, I’m going to try to get it done and do as good a job as possible.”

Everett out: Safety Deshazor Everett was officially ruled out of Sunday’s game, meaning Troy Apke will return to the lineup alongside Kam Curl.

First the "Redskinettes" and later "The First Ladies of Football," for the first time since 1962 the Washington Football Team won't have cheerleaders this season.

One of the year’s best feel-good stories has met the cold realities of the NFL.

To keep Brandon Scherff, Washington may have to first let him go

Coming off yet another elite season, the former No. 5 overall pick will almost certainly become the highest paid guard in football.

"There cannot be healing for any of us without understanding the truth, which will provide confirmation that we are not alone, and that our allegations are supported by others."

Hallman: McDowell didn't cause crash that led to Daytona victory

Right off the top, let’s establish one thing. Michael McDowell, surprise winner of the Daytona 500, did not do anything untoward on the final …

With the announcement, the tournament has now crossed the $5 million mark in giving over the course of its five-year run in Richmond.

Hallman: A little rain on road courses is no reason for big caution calls

Later start, by about a month. Extended series against the same opponent at the same ballpark. Play into mid-September. No indication there wi…

Morgan Moses (Meadowbrook) had to move from right tackle to left tackle for the Washington Football Team in the second half last week after Cornelius Lucas was injured. Lucas was replacing Geron Christian.