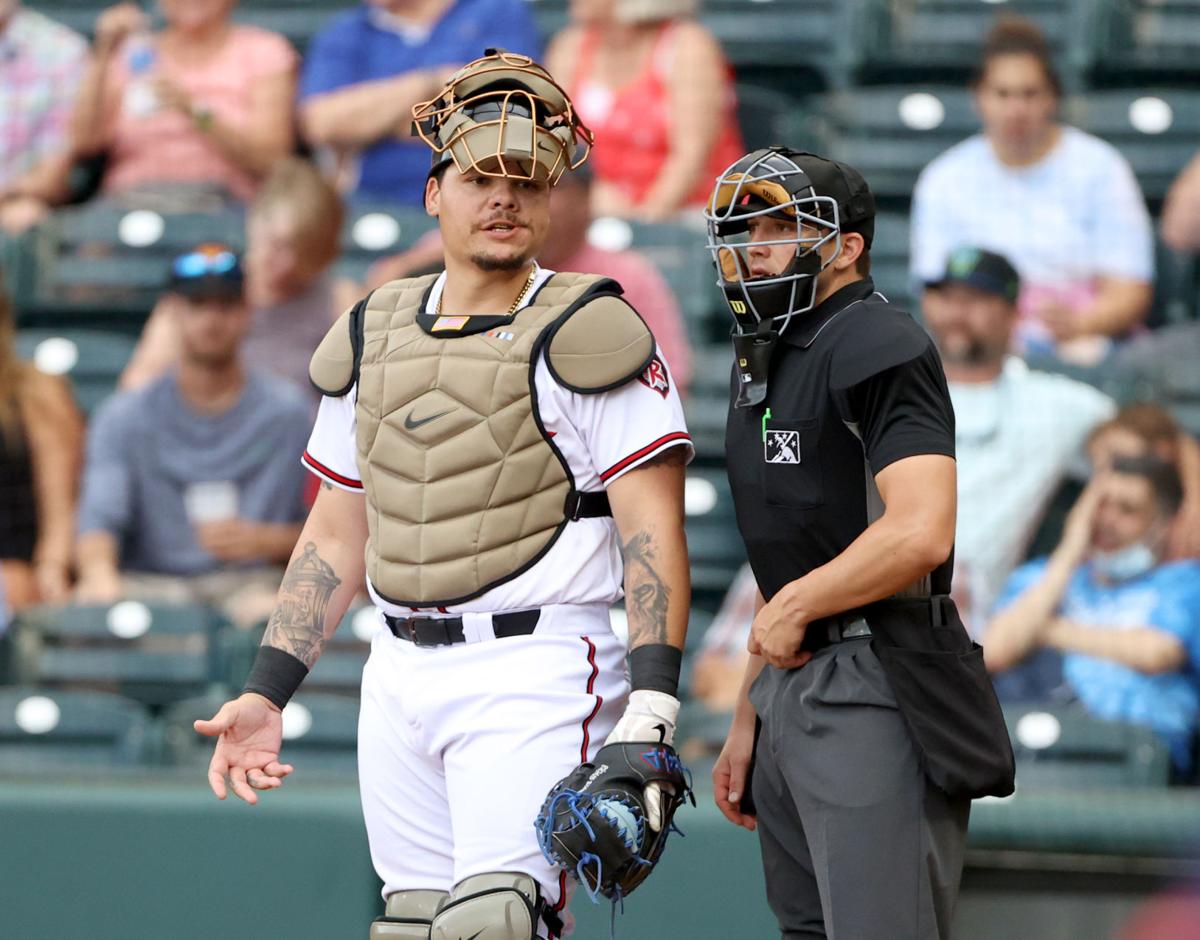 Flying Squirrels catcher Bruce Maxwell talks with home-plate umpire Steve Hodgins during the second game of Thursday’s doubleheader. Maxwell arrived in the Giants’ organization via a Sunday trade from the Mets, and was assigned to Richmond on Tuesday. 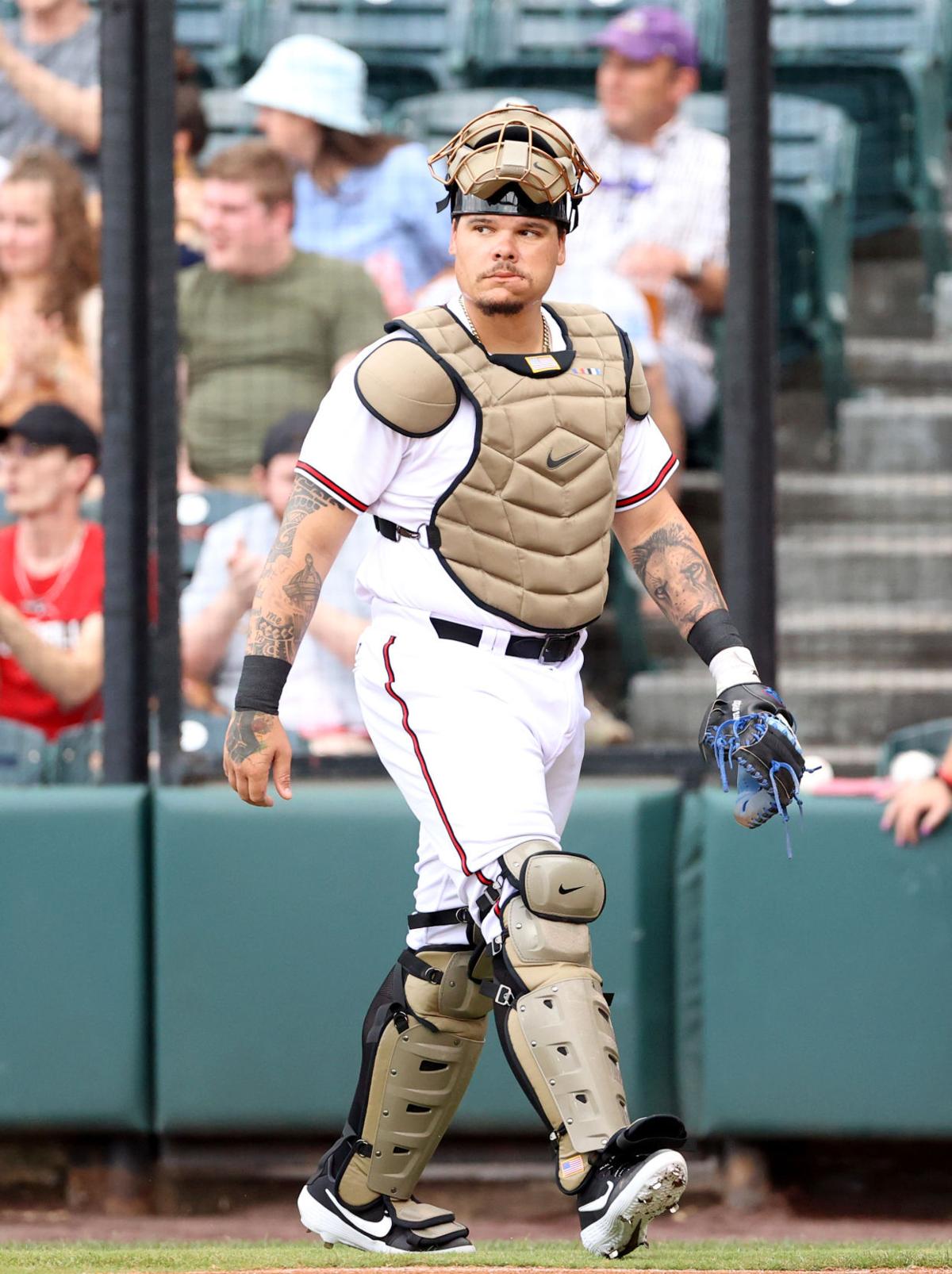 Richmond Flying Squirrels' catcher Bruce Maxwell walks into a game against Harrisburg Senators at The Diamond in Richmond, Va., on Thursday, June 10, 2021. 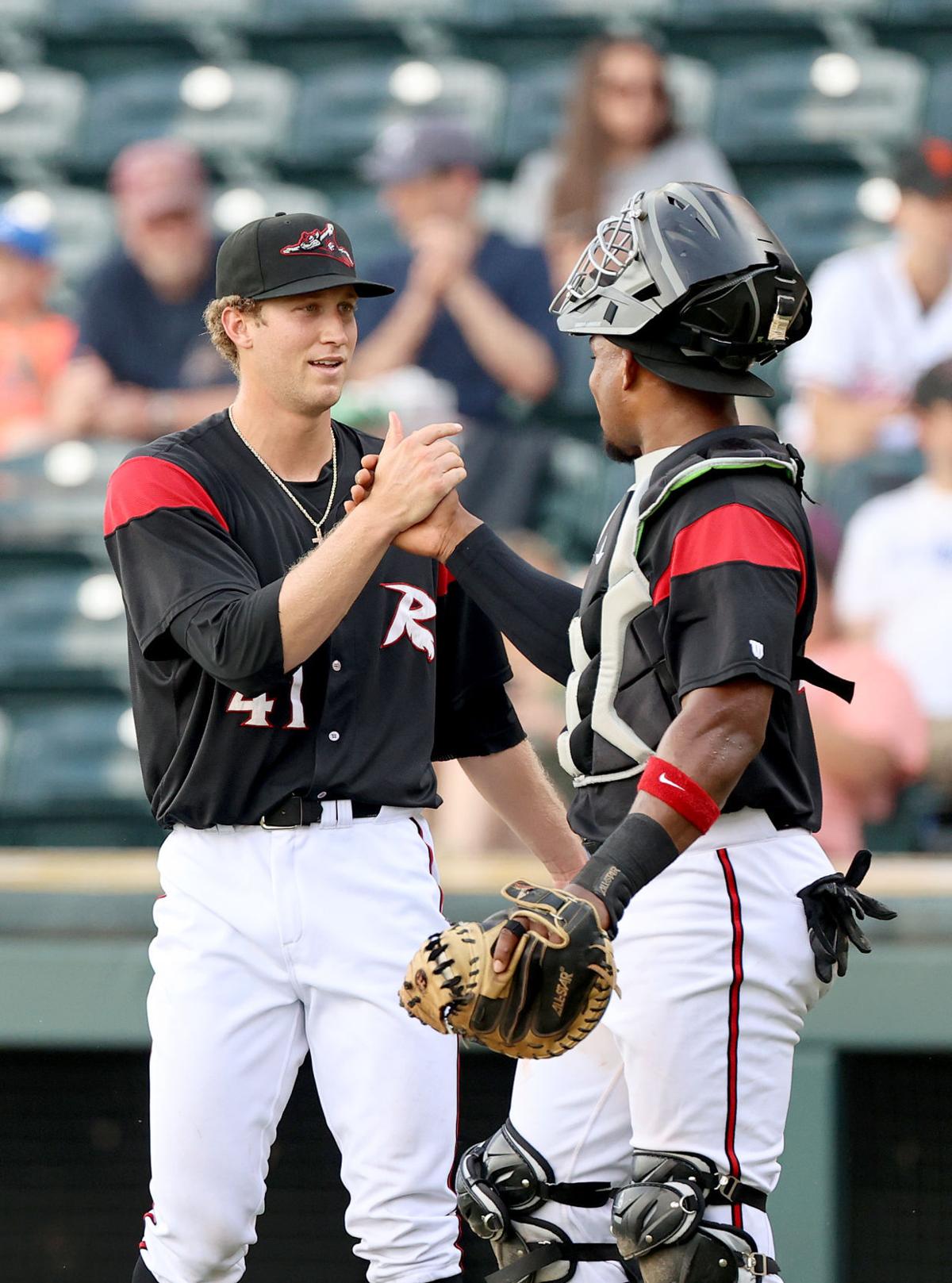 Flying Squirrels starting pitcher Caleb Kilian and catcher Andres Angulo celebrate after securing an 8-1 victory over the Harrisburg Senators in the first game of Thursday’s doubleheader at The Diamond.

Bruce Maxwell’s arrival in Richmond makes him the oldest player on the Flying Squirrels’ active roster, and with his landing comes the veteran presence and wealth of experience that he’s gathered both on and off the field.

The first MLB player to kneel during the national anthem back in 2017 when he played for the Oakland A’s, Maxwell told CNN earlier this year that he was met with death threats following his stance. His family was, too. He struggled to cope with significant amounts of backlash, even contemplating suicide during the aftermath, he told CNN. The experience made him more conscious of his teammates’ mental wellbeing, something he says is frequently overlooked in professional sports.

Maxwell’s winding path included three years in the majors with the A’s, a year in the Mexican minor league and the first part of the 2021 season with the Syracuse Mets. Monday, after the Mets traded Maxwell to the San Francisco Giants — the Flying Squirrels’ MLB affiliate — the 30-year old brought his veteran experience to Richmond.

“At least what I went through, when you’re struggling mentally, you feel like you have nobody,” Maxwell said on Thursday. “My teammates are my family and so I try to be available for these guys when they’re going through those crises.”

Maxwell said it’s important he shares his experience climbing to the majors with his new teammates. But simply checking in on his teammates — and their mental health — is even more crucial.

“I tell all these guys, I really don’t give a s- — about your physical performance, I’m worried about your mental,” Maxwell said. “Even at the top a lot of people struggle mentally when it comes to feeling like they belong somewhere or feeling like they’re doing enough … So I try to make sure I check on my guys.”

Mentorship is an area the veteran has emphasized as he’s grown older. Maxwell said he’s been mentoring Ronnie Williams, a current Flying Squirrels player, after meeting the pitcher a couple years ago. Richmond manager José Alguacil said he saw “a big connection” while Williams and Maxwell were talking earlier in the week. It’s important for the sport to “keep the ball rolling” and continue passing knowledge forward to younger players, Alguacil said.

Maxwell is willing to do just that.

“Taking someone under his wing,” Alguacil said. “When players see that, more are going to come to him and try to take advantage of whatever he can offer to these guys to help him out. Not just on the field, it’s outside the field as well.”

Maxwell works with kids across the country, he said. He also said he spent the past few years working at a camp called the Dream Series to help mentor minority baseball high school baseball players. He keeps in touch with those players, checking in regularly like he does for teammates.

“Not many African-American players come into the game of professional baseball, and the higher you go, the less there are, so I try to make sure I take care of my guys … to make sure that they’re prepared for what they’re potentially going to step into,” Maxwell said.

He’s part of All-Star Advocacy as well, a San Diego-based group that works to address social issues like systemic racism and voter suppression. When younger Flying Squirrels players see Maxwell’s role in the community — one he’s still working to develop in a new city — “it’s going to be huge for these guys to see that there’s life outside the field,” Alguacil said

The move from the majors to Double-A baseball isn’t an easy one, Alguacil said, but he said that so far Maxwell has brought a good attitude. The catcher plans to use his experience to show younger players how to develop a routine and how to mentally prepare for the stress that comes with playing professionally.

“I was here one time,” Maxwell said of playing in the minors. “I’m here again, and so now it’s about trying to mentally prepare these kids to climb the ranks and to get on that TV and make their money and to make their families proud.”

Back on the field for Maxwell, it’s about getting back into a routine. “Hell yeah, of course my goal is to get back to a major league club,” he said, and added that it’s just about re-establishing himself and getting into rhythm as he accumulates at-bats. Teammates might see him as a veteran, but it’s important to blend in and be one of them, he said.

“He just needs to get back in the groove of playing,” Alguacil said.

Shane Matheny continued the rhythm for the Squirrels in the bottom of the third with a two-run homer to right field, and Kyle Mottice’s double that dribbled along the left field line scored another two to put Richmond up 7-1.

In the second game, the Flying Squirrels secured a 1-0 win. A second inning sacrifice fly from Andy Sugilio allowed Ryan Howard to score the game’s only run. Just after the Squirrels (20-13) notched the third out of the top of the fifth inning — making the win official — the game was called due to rain.

A salute on the 35th anniversary of Richmond's International League championship.

The Richmond Kickers secured their fourth clean sheet of the season Saturday night in Wisconsin, as the Reds held Forward Madison FC to a scor…

Taylor Heinicke sat out the workout because of an injury he had on Tuesday. During a walkthrough period, he was elbowed above the eye by a running back during a play-action drill, and needed stitches.

Flying Squirrels catcher Bruce Maxwell talks with home-plate umpire Steve Hodgins during the second game of Thursday’s doubleheader. Maxwell arrived in the Giants’ organization via a Sunday trade from the Mets, and was assigned to Richmond on Tuesday.

Richmond Flying Squirrels' catcher Bruce Maxwell walks into a game against Harrisburg Senators at The Diamond in Richmond, Va., on Thursday, June 10, 2021.

Flying Squirrels starting pitcher Caleb Kilian and catcher Andres Angulo celebrate after securing an 8-1 victory over the Harrisburg Senators in the first game of Thursday’s doubleheader at The Diamond.