Ron Rivera: It was 'serendipity' that Steelers upset came exactly one year after he was called about WFT job
0 Comments
Share this
1 of 2 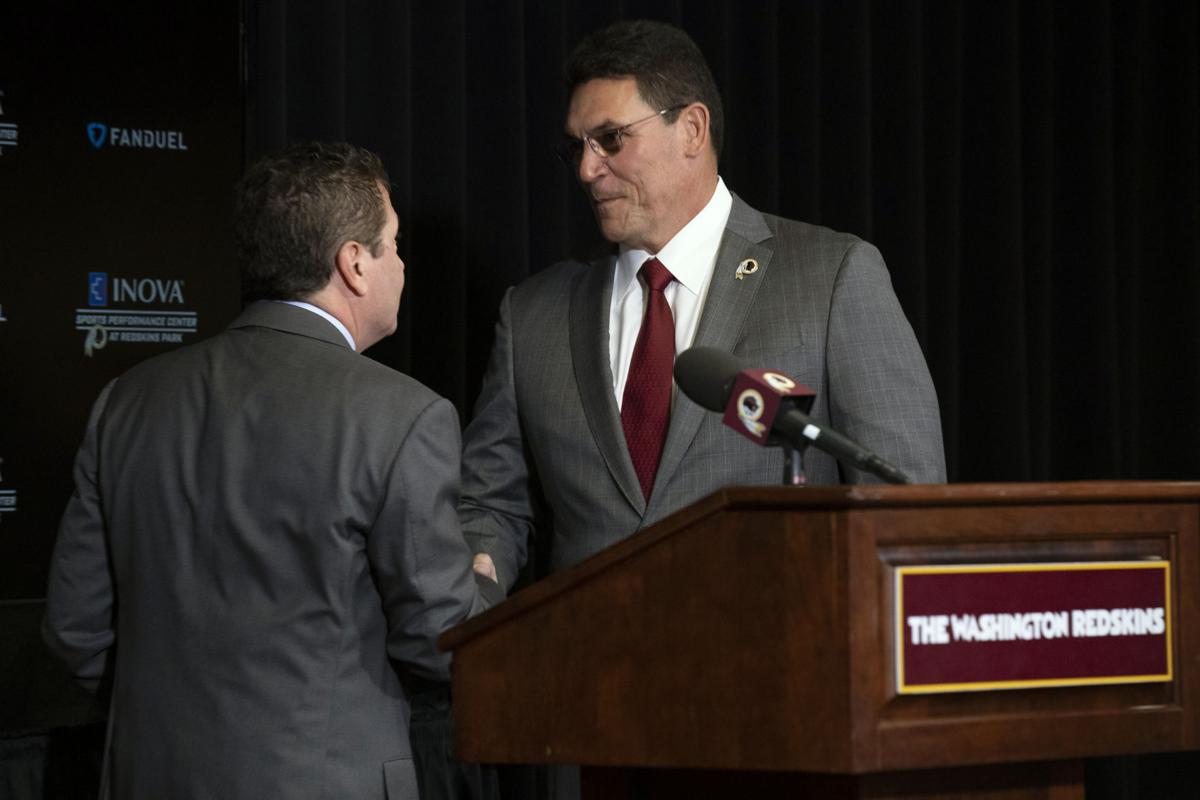 Washington owner Dan Snyder, left, shakes hands with new coach Ron Rivera during a news conference on Jan. 2, 2020. The team has since changed its name to the Washington Football Team. 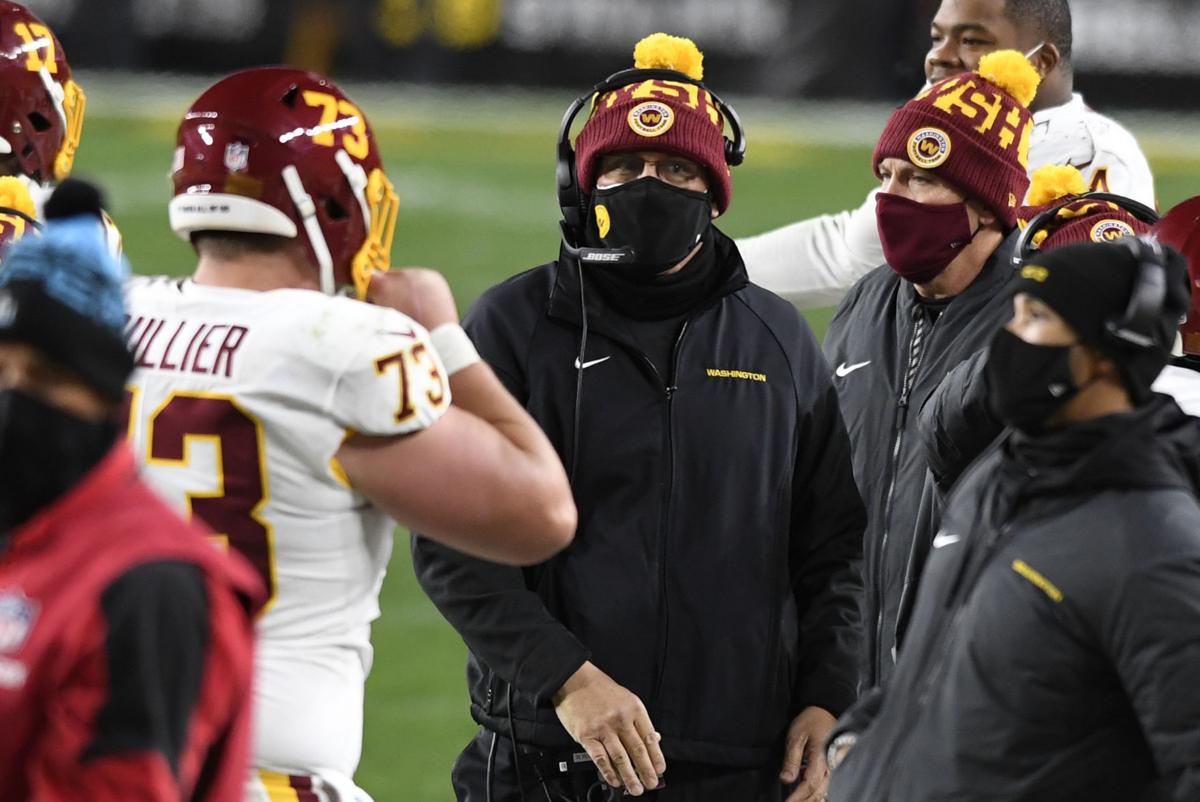 Washington coach Ron Rivera (center) acknowledged that Monday’s upset of the Pittsburgh Steelers was a “huge step forward,” but he cautioned against taking “two or three steps backward.”

“He started to congratulate me, and I stopped him,” Rivera said. “I said, I want you to know that this victory came exactly one year from the first time he and I talked about the job.”

Rivera was fired by the Carolina Panthers on Dec. 2. Five days later, Snyder called — a series of conversations that led to Rivera and his wife Stephanie flying to Washington the next weekend for an extended visit.

“[Snyder] said in his conversations with Joe Gibbs, Joe had told him about the things that I had done, and what I had done with all the situations we had there in Carolina,” Rivera said. “That [initial] conversation was probably a little over an hour, and I’d say 45 minutes of it, minimum, was probably about culture — about rebuilding culture and doing the things that were needed, and this is about to be a coach-centric approach if this is what you’re looking for.”

The hurdles Rivera encountered in Carolina were nothing compared to what he’s faced in his first year in Washington.

Because of the coronavirus pandemic, Rivera didn’t get to meet his players in person until training camp. During that time, the organization went through a name change, reacted to racial protests and was the subject of a Washington Post report alleging widespread sexual misconduct.

Then, just before the season, Rivera was diagnosed with cancer.

Through it all, he’s preached the importance of getting buy-in to the way he plans to run the operation in Washington, and the culture he plans to establish.

“We talk about all these things that coach brings up throughout the weeks, and it’s good to see the guys and the team just taking ownership of it and going out and playing football.”

Monday’s victory, an upset of the 11-0 Steelers, was the most resounding endorsement yet of the rebuilding, but the next morning, Rivera was hesitant to link the two.

“There are a lot of positives to take from that game,” Rivera said. “Now, we have to see how we handle this success, we really do. You can take a huge step forward, but if you’re not careful, you can take two or three steps backward.”

Rivera has preached a similar message of incremental progress after tough losses. He admitted, though, that the win was particularly sweet given the circumstance of it being a year after he was fired in Carolina.

No Wednesday practice for Washington: Rivera didn’t have the team gather for its usual Wednesday practice to provide more recovery time after Monday’s game. The coach said having most meetings virtual last week, an NFL decision, led him to believe the players could learn and prepare in that format.

Washington will shuffle its schedule — instead of flying to the West Coast on Friday, as is typical, the team will practice and leave for Arizona on Saturday morning instead.

If Gibson can’t play, Washington will start J.D. McKissic, with Peyton Barber also available. Bryce Love is on injured reserve and will not play again this season, but Washington can call up practice-squad running back Javon Leake if the team wants a third option on game day.

To bolster depth, Washington signed running back Michael Warren to its practice squad on Monday — players need several days to clear COVID protocols before they can join the team.

Judge rules in favor of Washington Post: A lawsuit between Snyder and the team’s minority owners over a proposed sale of the team is not allowed to be conducted in secret, a judge in Maryland ruled on Monday.

Documents pertaining to the lawsuit will now be made public after a period of redaction.

In an argument against hearing the case in public, the NFL said First Amendment rights to open access don’t apply in this case because it is “about the private ownership interests of a member of a private, voluntary organization.”

In the past decade, the team has received money from the Virginia state government, Loudoun County and the City of Richmond. Maryland contributed about $70 million in infrastructure improvements when FedEx Field was constructed in 1997.

Washington owner Dan Snyder, left, shakes hands with new coach Ron Rivera during a news conference on Jan. 2, 2020. The team has since changed its name to the Washington Football Team.

Washington coach Ron Rivera (center) acknowledged that Monday’s upset of the Pittsburgh Steelers was a “huge step forward,” but he cautioned against taking “two or three steps backward.”