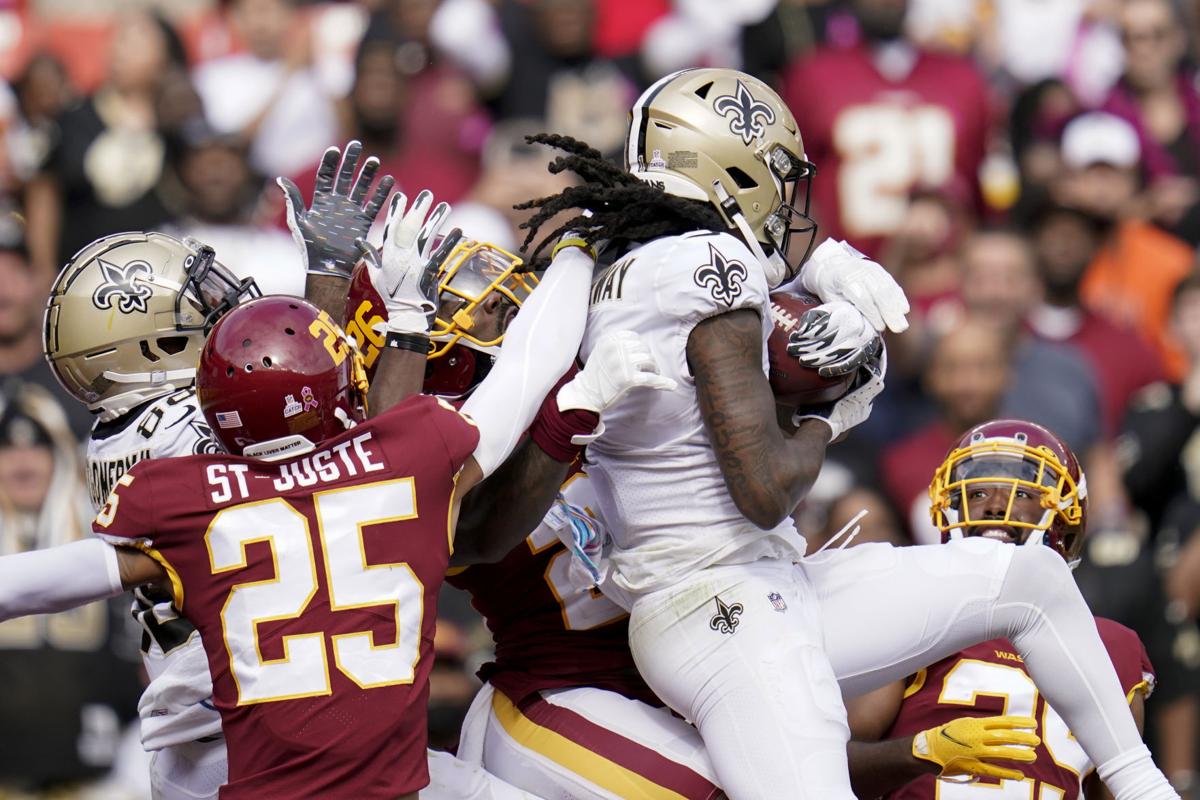 New Orleans wide receiver Marquez Callaway catches a Hail Mary pass for a touchdown at the end of the first half in the Saints’ road victory over the Washington Football Team. Callaway finished with four catches for 85 yards and two TDs. 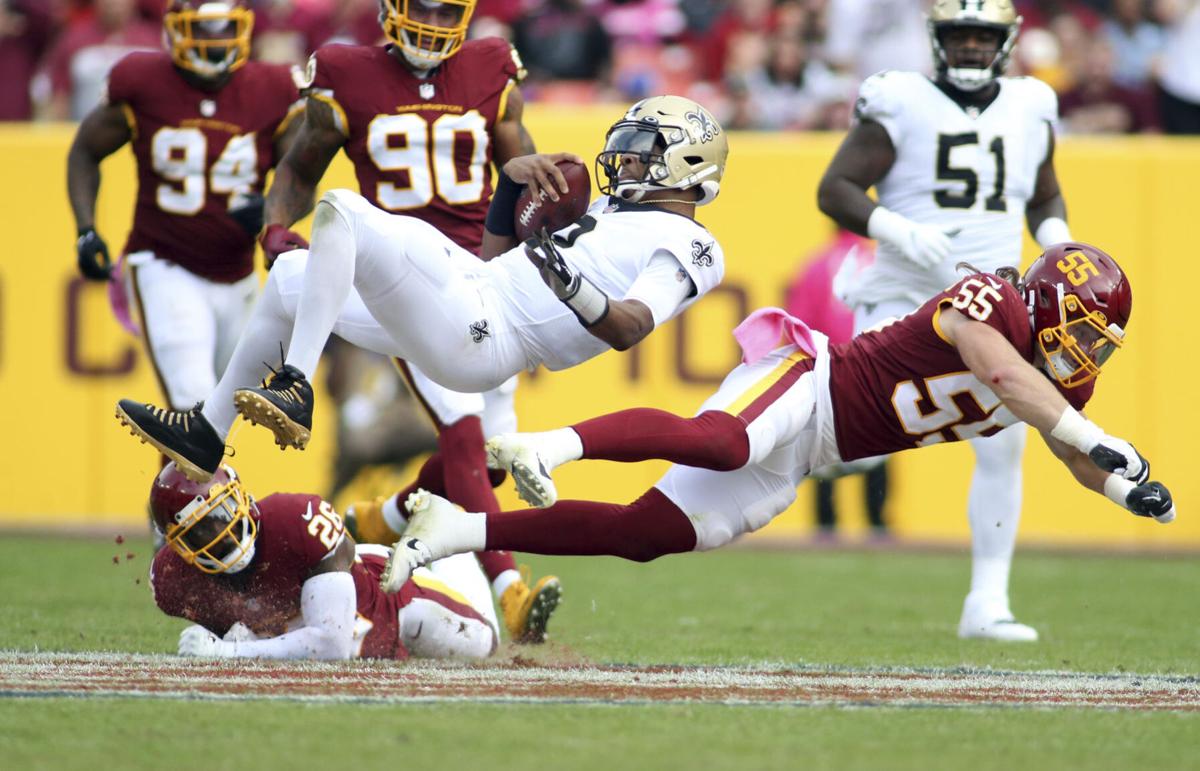 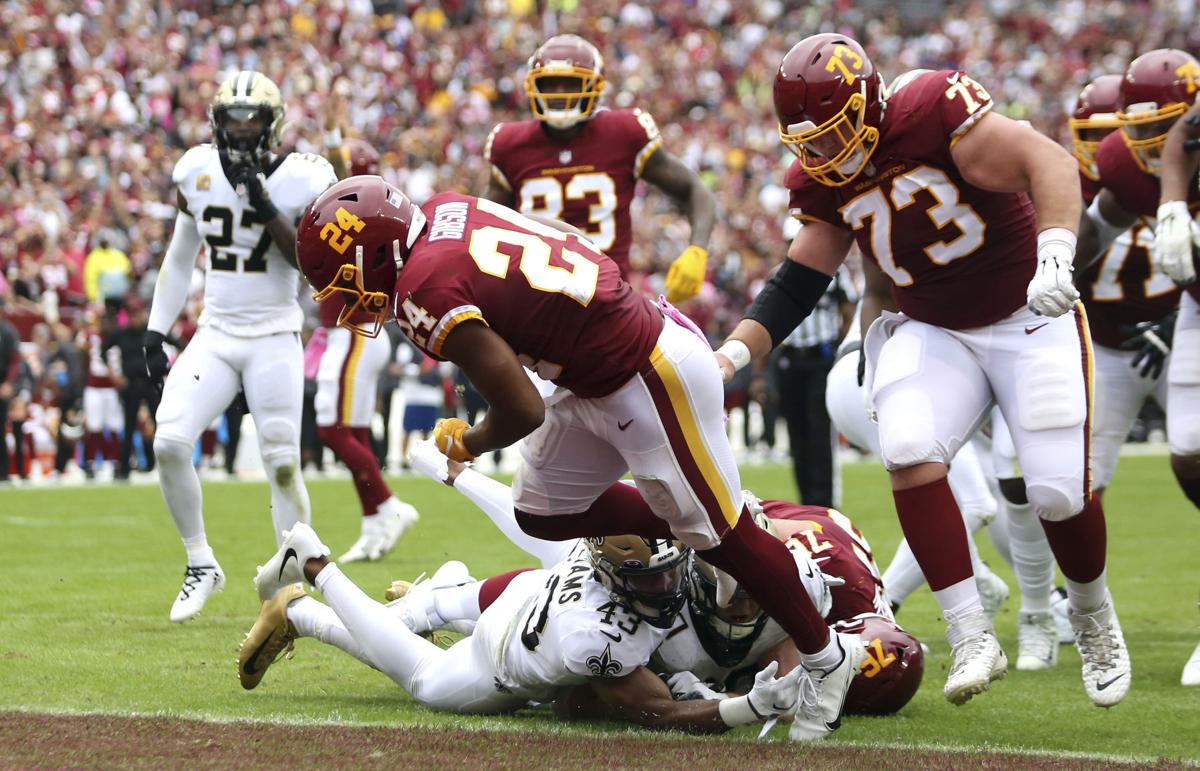 Washington’s Antonio Gibson scores one of his two touchdowns in his team’s loss to New Orleans. Gibson rushed 20 times for 60 yards and caught two passes for 12 yards. 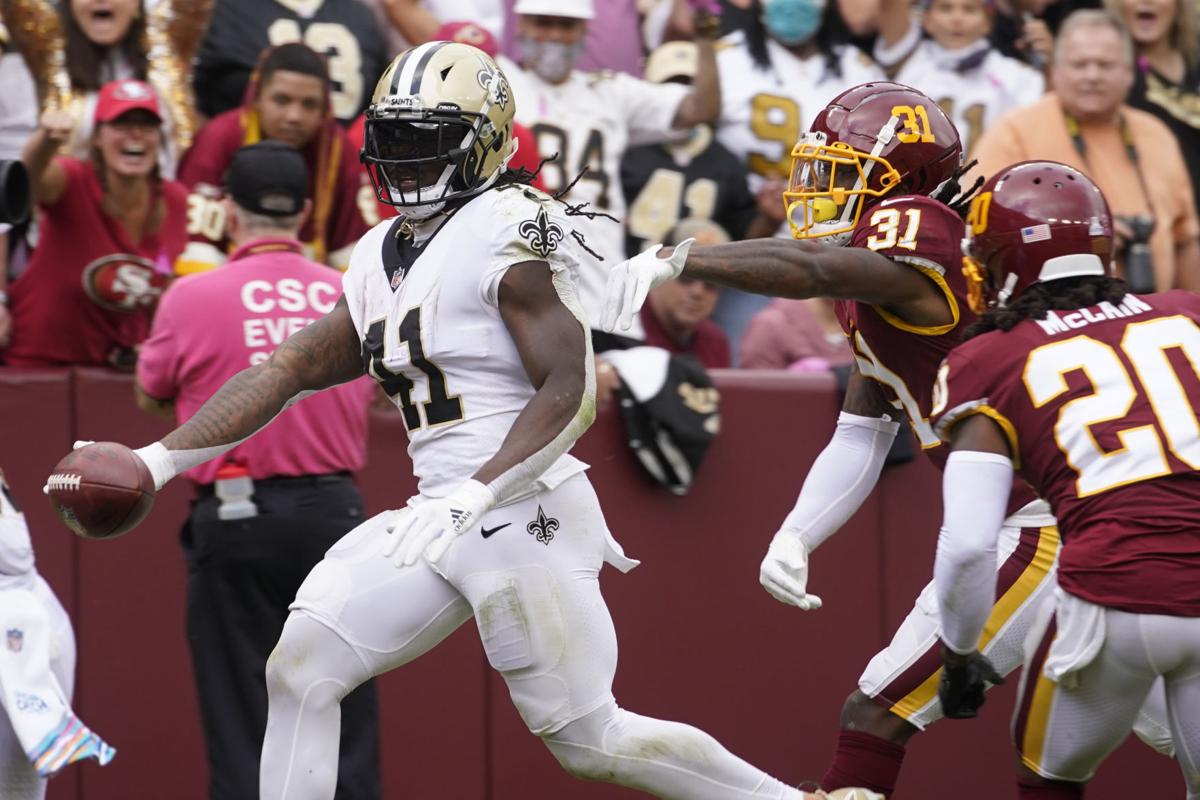 New Orleans Saints running back Alvin Kamara (41) scores a touchdown in the second half of an NFL football game against the Washington Football Team, Sunday, Oct. 10, 2021, in Landover, Md. (AP Photo/Al Drago) 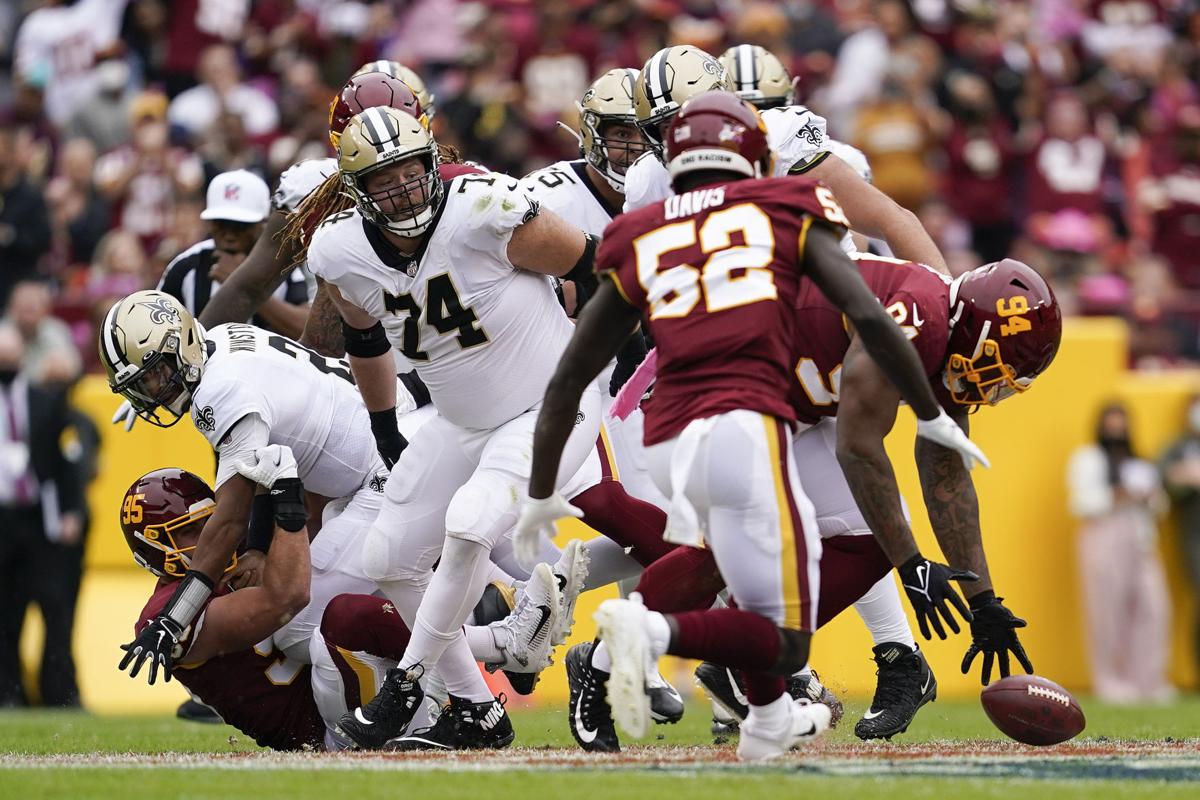 LANDOVER, Md. — Given an opportunity to get right after a rough start to the season, the Washington defensive line rose to the occasion. The secondary, however, did not.

A number of embarrassing coverage miscues culminated with 8 seconds left in the first half, when New Orleans Saints quarterback Jameis Winston let a 49-yard Hail Mary pass fly into the end zone.

None of the six Washington defenders even jumped as the ball landed in the outstretched arms of Marquez Callaway, sparking the Saints to a 33-22 victory.

“I’m very frustrated because we’ve got too many good football players to not be better than what we are,” coach Ron Rivera said. “But the record tells everybody what you are, and that’s what we are: We’re a 2-3 football team right now.”

On the Hail Mary, safety Landon Collins said the team called a defense expecting New Orleans to go for a quick completion that would get the Saints into field goal range.

“We were thinking field goal, not Hail Mary,” he said. “When the ball went up in the air, we weren’t prepared for that one.”

The Saints backed up their win with a gutsy call late. With New Orleans leading by 5 points and 6:12 remaining, Saints coach Sean Payton elected to go for it on fourth-and-1 from his 34-yard line. Winston executed a successful QB sneak, jump-starting a touchdown drive that put the game out of reach.

Washington quarterback Taylor Heinicke had perhaps his worst game since being named the team’s starter. He threw two interceptions, the latter a backbreaker at the end of the third quarter when Heinicke seemed to stare down the defender before throwing it his way.

Rivera was mostly complimentary of Heinicke in his postgame remarks, with the coach saying he “takes his hat off to him, because this is a guy that fights and does everything he needs to do to give us a chance.”

Rivera said that moments after castigating the defense for a lack of confidence. The film will be unkind to Heinicke on the interceptions, something he acknowledged.

“When you’re down in the red zone, you’ve got points on the board, you just can’t give the other team the ball,” he said. “Then [on the second one], backed up, third down, awful decision. I was trying to lay it over this guy’s head and he was just right there, I threw it right to him. Then I’m putting the defense in a bad spot. Other than those two plays I thought we moved the ball pretty well as an offense, but again, those two decisions killed us.”

Two plays defined the secondary’s day, too — the Hail Mary and a 72-yard touchdown where Collins was up at the line of scrimmage when the ball was snapped, leading to an easy touchdown for Deonte Harris.

“He was probably about 12 yards,” Winston said. “And his speed vs. Deonte’s speed is not really a comparison.”

Collins added that the unit is “better than what we did on that field today,” but fellow cornerback William Jackson III took that a step further.

Jackson, who now leads the NFL in penalties by a defensive player (5), was downright optimistic.

“I just feel like we have things to build off of,” he said. “Everybody wants to harp on the negative, but there were some great plays out there, we got some picks, we got some sacks, we did a lot of things today that we can build off of.”

The front four — a front five on many plays — can claim that honestly, having pressured Winston enough to make him uncomfortable most of the day.

But major errors continue to plague the secondary, and five weeks into the season, it’s getting harder to dismiss them as aberrations.

New Orleans wide receiver Marquez Callaway catches a Hail Mary pass for a touchdown at the end of the first half in the Saints’ road victory over the Washington Football Team. Callaway finished with four catches for 85 yards and two TDs.

Washington’s Antonio Gibson scores one of his two touchdowns in his team’s loss to New Orleans. Gibson rushed 20 times for 60 yards and caught two passes for 12 yards.

New Orleans Saints running back Alvin Kamara (41) scores a touchdown in the second half of an NFL football game against the Washington Football Team, Sunday, Oct. 10, 2021, in Landover, Md. (AP Photo/Al Drago)