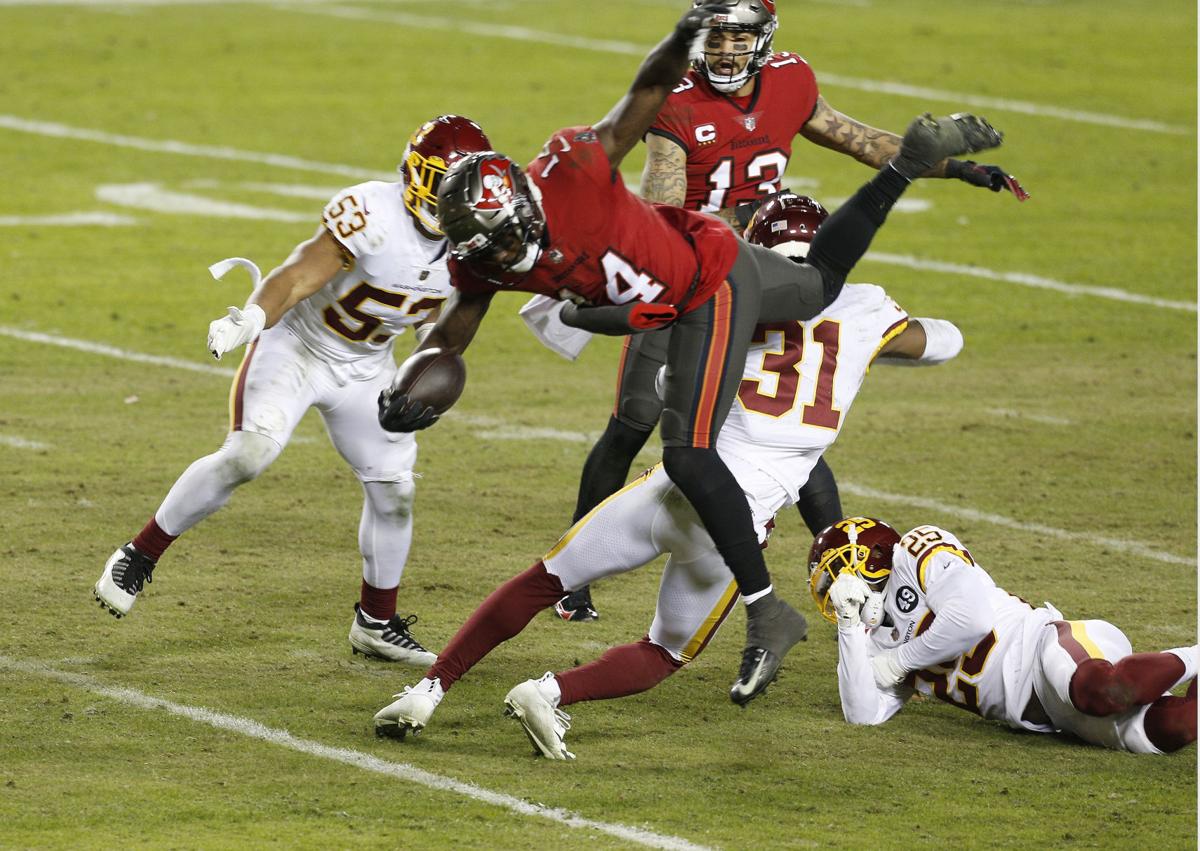 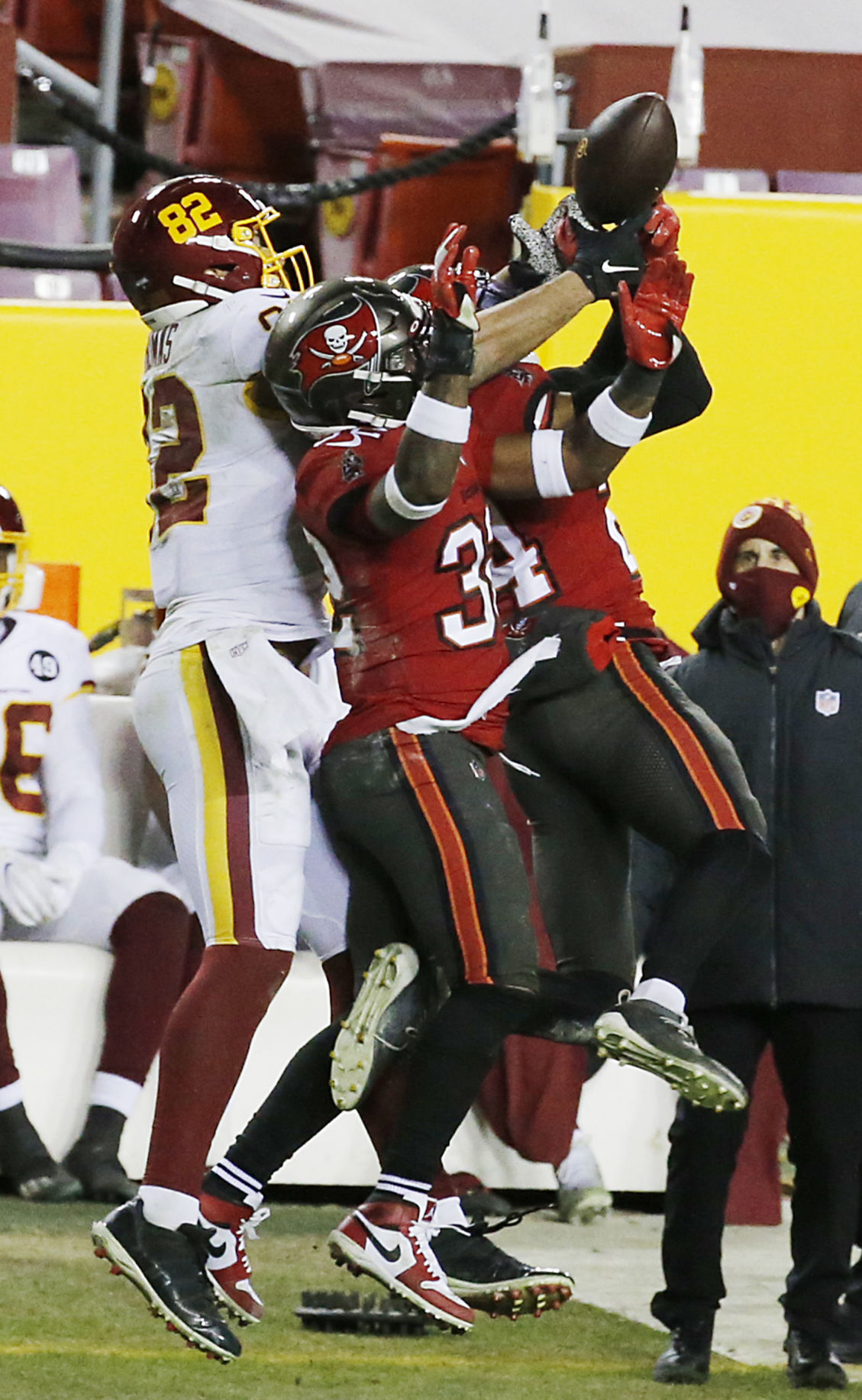 WFT's Logan Thomas can't get to the ball on a desperation pass near game's end at FedEx Field on Saturday, January 9, 2021 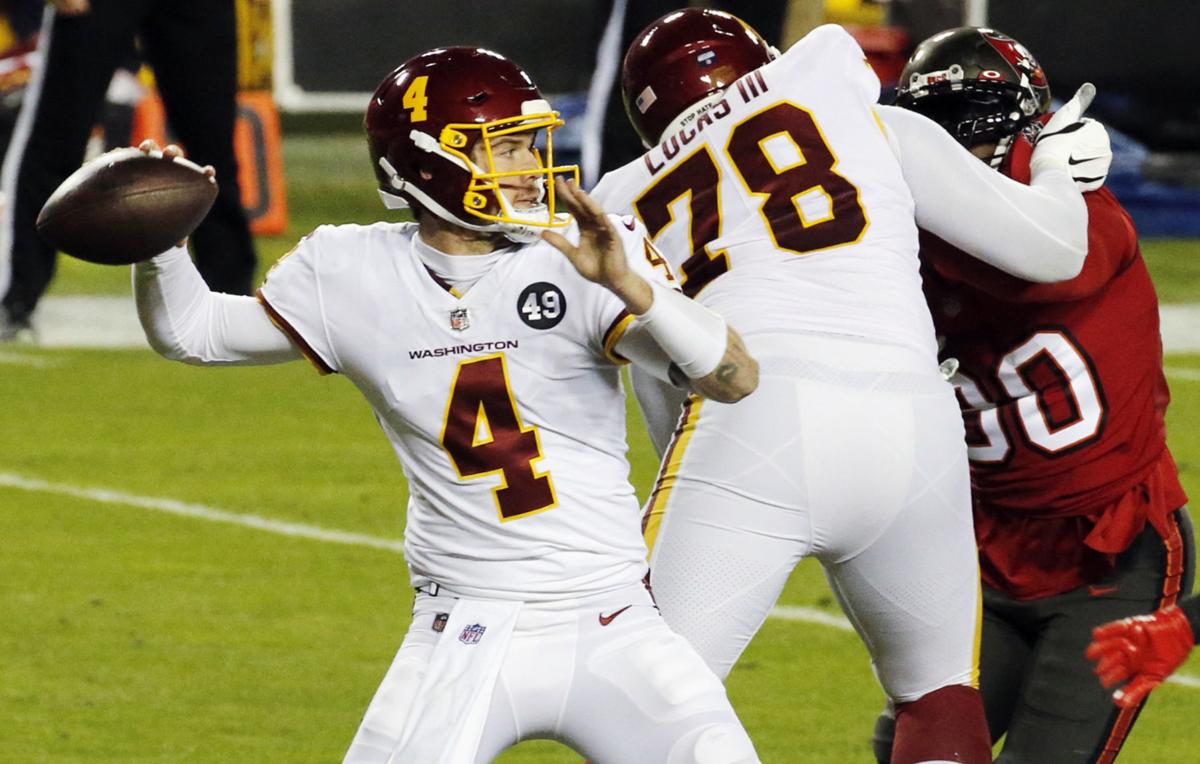 WFT's Taylor Heinieke drops back to pass early in the playoff game against Tampa Bay on Saturday, January 9, 2021 at FedEx Field 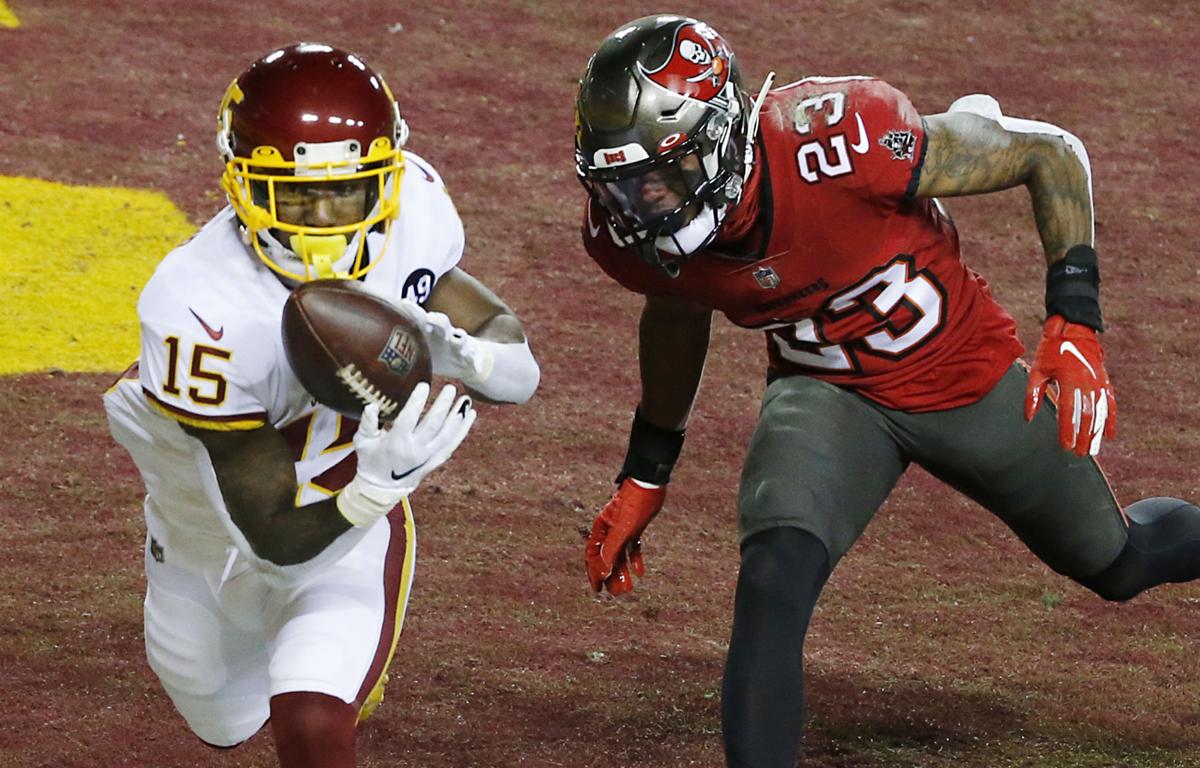 LANDOVER, Md. — The quarterback who wasn’t good enough to start in the XFL nearly matched Tom Brady throw for throw.

In a wild night in the NFL playoffs, Taylor Heinicke, who joined the Washington Football Team just five weeks ago, nearly pulled off an upset for the ages.

“There’s some things you just can’t teach,” offensive lineman Morgan Moses said. “He has that ‘it’ factor.”

While Heinicke stole the national spotlight, Brady and the Tampa Bay Buccaneers made just enough plays to emerge with a 31-23 victory in a first-round game.

Heinicke, a college standout at Old Dominion, was brought in as an emergency option in Washington but ended up starting in the season’s most important game after Alex Smith couldn’t play because of a right calf injury.

Heinicke hadn’t played since he was a backup in the XFL this spring. When no NFL opportunity materialized, he went back to ODU to finish his degree.

Washington had the ball, down by 8 points, with 2:49 remaining, but after driving into Buccaneers territory, Heinicke’s magic ran out when he was sacked on third down, and a fourth-down heave went incomplete.

His crowning achievement came at the end of the third quarter, when he somehow eluded Tampa Bay’s pass rush and ran for an 8-yard touchdown that turned heads across the league — Kansas City Chiefs star Patrick Mahomes tweeted his appreciation as Heinicke suddenly became the league’s hottest story.

On that touchdown, though, Heinicke separated his shoulder. He went to the locker room for treatment, then returned and led Washington to one more touchdown to keep the Football Team in the game.

He said he wanted to finish the game, and wanted to hang around for another season in the NFL.

“Hopefully, I can do it again next year,” Heinicke said. “I’ve been on the other side, not playing and being in the real world, and it’s not fun. It’s not as fun as this.”

Had he gone against virtually any other opponent, Heinicke might have been able to play another game.

Washington’s defense, one of the league’s best all season, struggled to contain Brady, one of the best ever. The loss brings defensive coordinator Jack Del Rio’s career record against Brady to 1-10.

Brady finished with 381 yards passing, and he made plays when it mattered to keep Tampa Bay ahead the entire game.

Washington had a number of near-misses, including a drive where an uncalled pass-interference penalty would have given the team the ball in the red zone, and another where Brandon Scherff was whistled for his first holding call of the year, but there was no holding to be seen on replay.

The Football Team also undid itself, including a decision to try a surprise onside kick that was unsuccessful, and failing to use its timeouts to create an extra possession before halftime.

Washington’s season ended with a 7-10 record, an NFC East title, and one memorable night for a little-known quarterback.

“It’s going to be something I’m really proud about,” Heinicke said. “With everything that happened in the past month and a half, to go out and do that, I’m proud of myself and I’m happy the coaches believed in me and gave me the opportunity.”

When the game ended, Washington wide receivers Terry McLaurin and Cam Sims waited to head into the locker room with Heinicke.

“I’d take No. 4 on my team any day of the week,” McLaurin said. “He has my respect. I hope we’re teammates in the future. I’m just proud of the way he gave us a chance to compete today.”

WFT's Logan Thomas can't get to the ball on a desperation pass near game's end at FedEx Field on Saturday, January 9, 2021

WFT's Taylor Heinieke drops back to pass early in the playoff game against Tampa Bay on Saturday, January 9, 2021 at FedEx Field