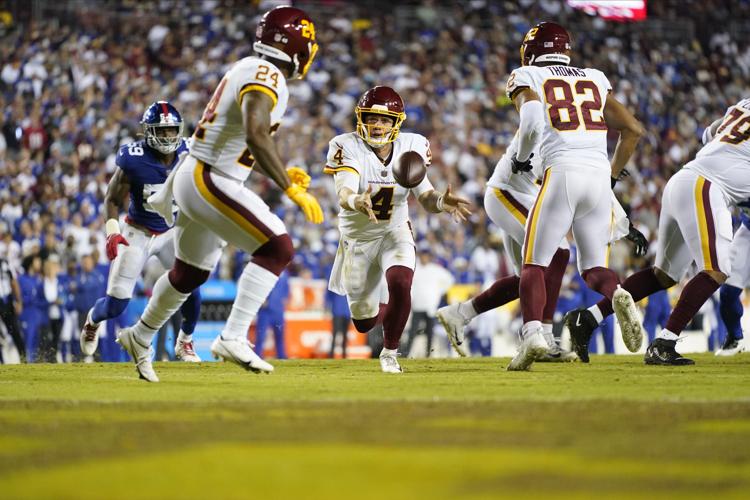 Washington Football Team quarterback Taylor Heinicke (4) tosses the ball to running back Antonio Gibson (24) during the first half of last Thursday’s game. 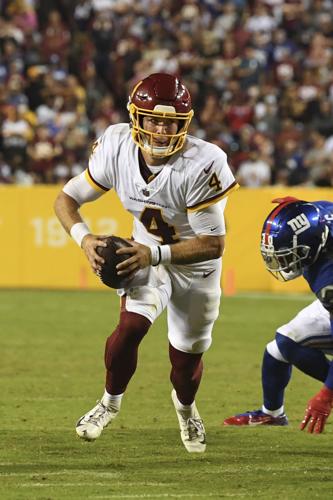 Washington quarterback Taylor Heinicke won his first NFL start last Thursday when he led his team to an NFC East victory over the New York Giants.

ASHBURN — With no game this past weekend, Taylor Heinicke had big plans.

Heinicke’s 15 minutes of fame, achieved in January during his playoff duel with Tom Brady, have been indefinitely extended.

The former Old Dominion star is now the starter for the Washington Football Team and logged his first NFL win against the New York Giants last week, ahead of a three-day weekend for the players.

Success hasn’t changed Heinicke, though, as evidenced by his weekend plans.

He showed up for his weekly press conference in a NASA T-shirt and noted that his teammates have ragged on him about his rags.

“They actually gave me a lot of flack last year because I was wearing some beat-up Vans [shoes], and I was wearing the same sweatpants every day,” Heinicke said with a laugh.

He can afford an upgrade now if he wants. The win represented the first big payday of his career, a $125,000 bonus in his incentive-laden contract.

Prior to that, one of his biggest wins was as a member of the XFL’s St. Louis BattleHawks, where the contracts awarded an extra $4,000 to the members of the winning team. The players learned that in the locker room after the first game, leading to a viral clip of Heinicke and some other players shotgunning Bud Light Seltzers that were also brought into the winning locker room each week.

“We’re all getting back into the locker room,” Heinicke remembered. “There’s, I want to say, four 24-packs of Bud Light Seltzer, and we’re like, ‘What’s this for?’ It’s like, you guys won, it’s for you guys. With that and everybody winning the $4,000, we’re all pretty pumped. So yeah, we were having a good time in there.”

Now he’s having a good time in Washington, though his success still hasn’t led to a call from the beer company.

He shared photos on social media of him drinking a Heineken during the weekend, but he’s still waiting on the endorsement deal.

“I’m trying man, I’m trying,” he said. “At some point, I might just start calling out Bud Light.”

On Tuesday, though, it was back to work in Ashburn.

Despite being 28 years old, Heinicke still is working through a number of NFL firsts, and Sunday in Buffalo will mark his first road start, so the team was working on its silent-count snaps during practice.

Heinicke also knows that working on his durability will be necessary. He said he left the Chargers game with a bruised shin and has been wearing a compression sleeve on it since then.

He took one step toward durability against the Giants, choosing to throw the ball instead of running with it on a number of occasions.

His clothing choices aside, teammates have lauded his growth, even in such a short window.

“It’s cool to see how ready he is each time he gets an opportunity to play,” receiver Terry McLaurin said.

“It’s hard not to respect the guy who’s ready for his opportunity. He has that chip on his shoulder and has worked his way up to get to this level — was a backup, told he can’t do this or that, was studying for finals, all that stuff.

“He’s not perfect. And we all understand that. But he always plays with everything he’s got. And I think fans respect that, and his teammates respect that.”

Hermitage's Will Adams signing with Commanders as undrafted free agent

Adams, a safety who starred at Virginia State, received an invitation to the team's post-draft rookie minicamp.

Richmond catcher Brandon Martorano collected a double and a triple among three hits.

After two-year absence, drag racing's best return to the region this weekend for NHRA Virginia Nationals

Was NASCAR’s Cup Series 400-miler at Kansas Speedway last Sunday a terrific race, or was it a laughable mess? The answer: in a word, yes.

TULSA, Okla. — The wind finally relented Friday in the PGA Championship. Will Zalatoris never did.

The Washington Commanders schedule for the 2022 season was released on Thursday night.

Washington Football Team quarterback Taylor Heinicke (4) tosses the ball to running back Antonio Gibson (24) during the first half of last Thursday’s game.

Washington quarterback Taylor Heinicke won his first NFL start last Thursday when he led his team to an NFC East victory over the New York Giants.