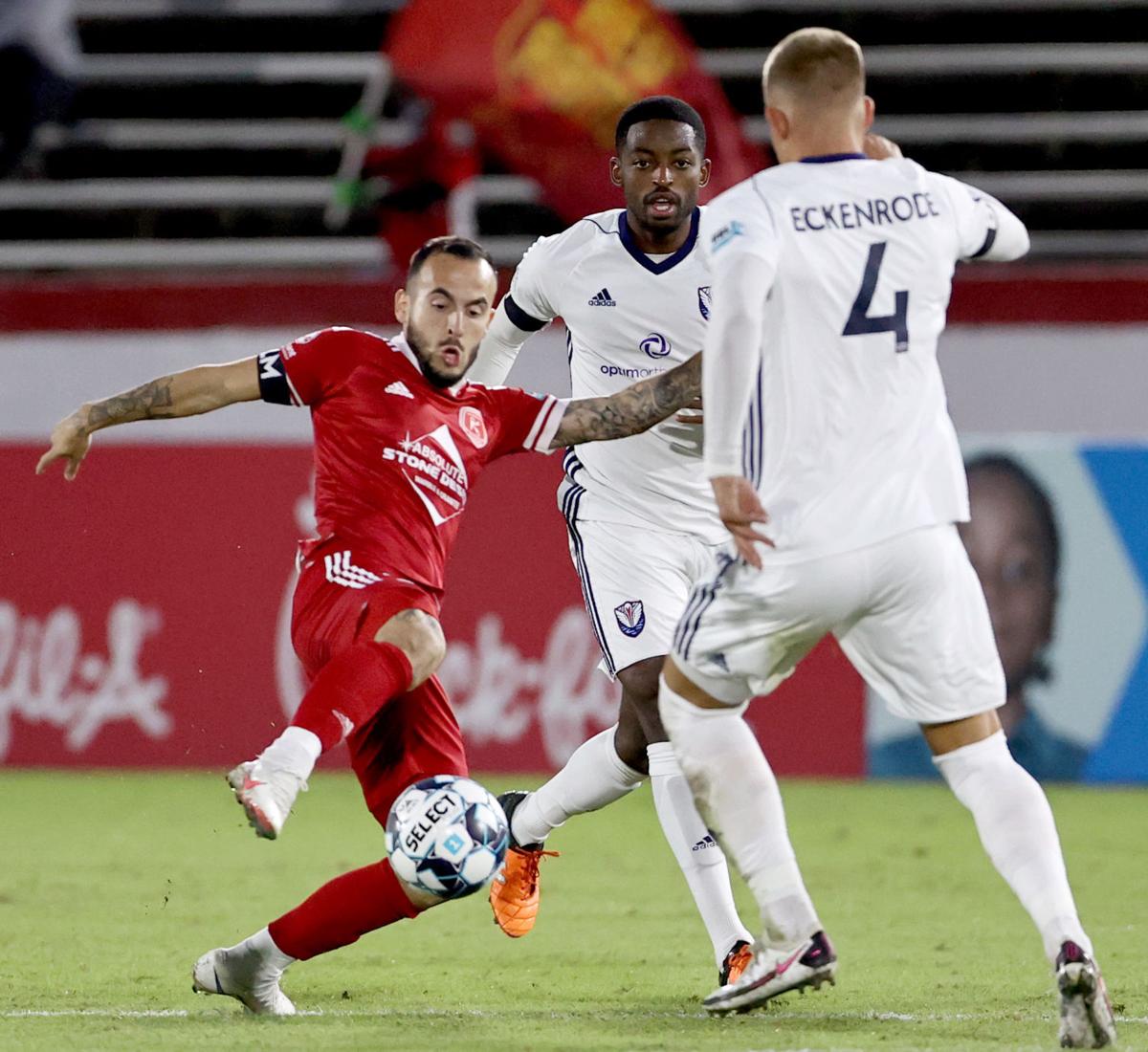 Kickers forward Emiliano Terzaghi (left) tries to gain possession between South Georgia defenders Abuchi Obinwa and Lars Eckenrode during their USL League One match at City Stadium. Terzaghi, who leads the league with 10 goals, exited with an injury. 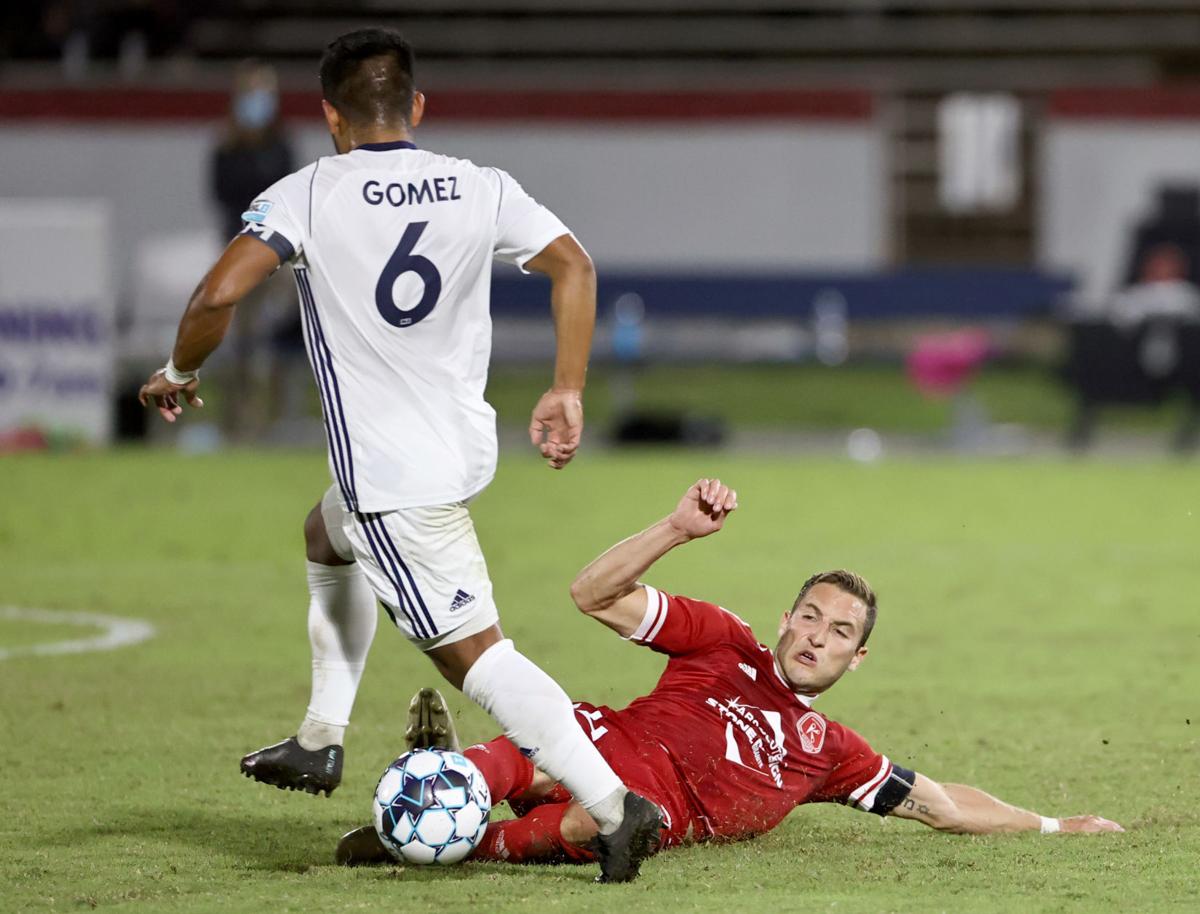 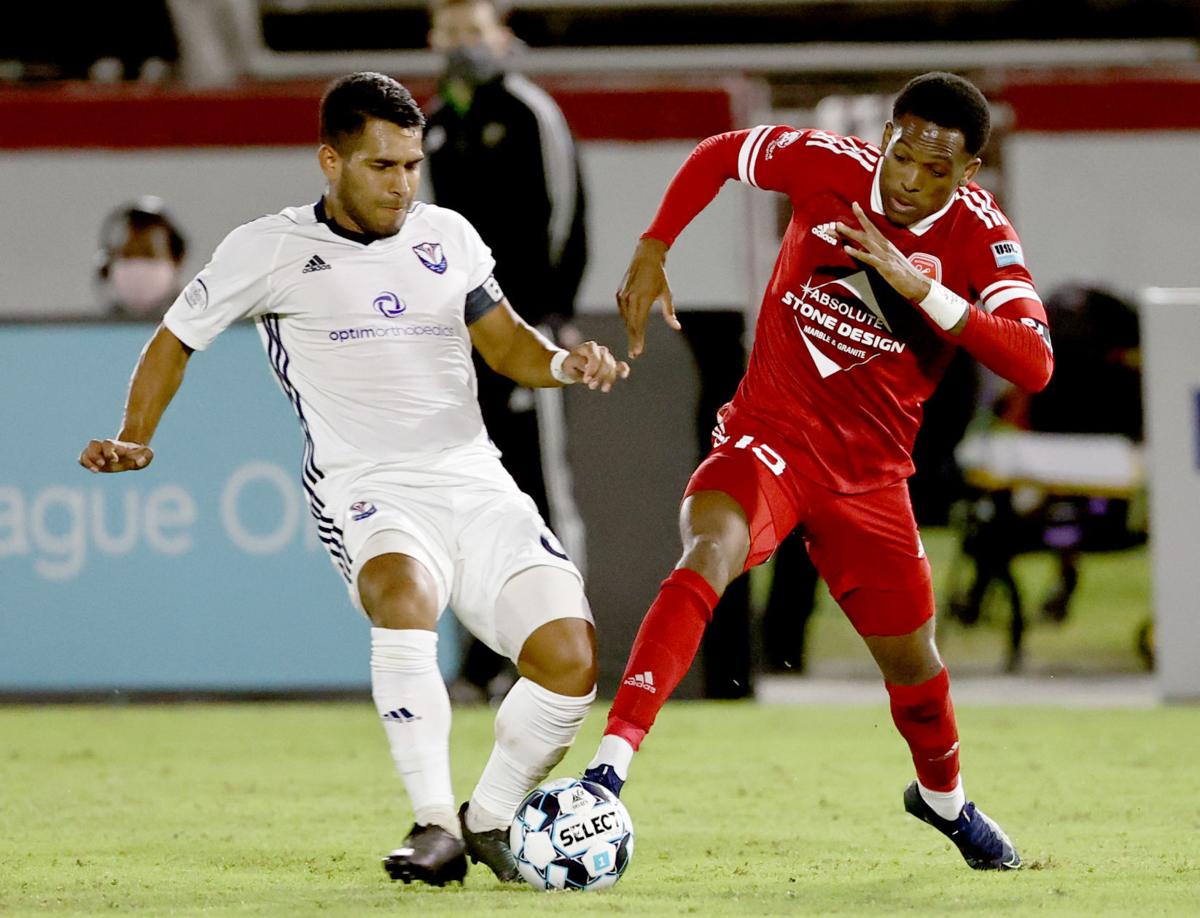 The ring of cowbells partnered with a constant drumbeat to provide the soundtrack to a sold out and palpably on-edge City Stadium Saturday night, in front of which the Kickers scratched and clawed but ultimately fell 1-0 to South Georgia Tormenta FC in a physical, penalty-filled tussle.

Although a sellout only entails 875 fans amid the coronavirus pandemic, Richmond’s second-place spot in the USL League One table going into the match with just one week to play resulted in a tense atmosphere at City Stadium. The league’s top two teams qualify for the championship match.

In Section O, the home of the River City Red Army, a Kickers fan group, Page Hayes played her drum and chanted throughout the match. She said Kickers fans were well aware of the playoff implications Saturday, and did their best to supply the requisite raucous.

”We bring the same kind of passion always, regardless of the situation,” said Hayes, who has been attending Kickers matches for six years. “We’re a 90-minute mentality, if we’re playing we’ve got to chant the whole time. So that’s what we’ll do.”

Kickers leading scorer Emiliano Terzaghi picked up an injury in the first half when a South Georgia defender rattled into him. After the match, Kickers head coach and sporting director Darren Sawatzky was unsure of Terzaghi’s status going forward.

But Sawatzky did say South Georgia, which has been eliminated from playoff contention, came into the match looking to play a physical game. Sawatzky felt the officials did not do enough to protect his players. Tormenta committed 14 fouls in the match, Richmond just five.

“A team that’s out of the playoff came in and played a center back up front and they came in throwing elbows, punching and kicking the crap out of my team to the point where arguably the league MVP (Terzaghi) is maybe out for a while because he just got beat up,” Sawatzky said.

“That’s not an excuse, we still needed to finish what we had but they had a game plan, they came in here to kick the crap out of us and get a win and it worked out for them.”

An altercation at the end of the match marred the proceedings, as a South Georgia player ended up in the stands after a verbal exchange with fans, capping an all-around contentious affair.

After a rugged first half in which neither side had a clear chance on goal, South Georgia (4-6-4) took the lead at the very end of a five-minute period of stoppage time.

Tormenta midfielder Marco Micaletto thumped home a close-range shot into the far corner past an onrushing Richmond keeper Akira Fitzgerald after Nil Vinyals made a marauding run down the center of the pitch. No Kickers defender stepped to Vinyals until he was already bearing down on goal, and by that time Micaletto had found ample space on the right side and had time to slot home the finish.

After South Georgia enjoyed the majority of possession in the first half, Richmond (7-5-2) largely flipped the script in the second.

Kickers defender Matt Bolduc nearly found an equalizer in the 80th minute when his low-driven shot from the edge of the box found its way through a sea of legs. But although the stop proved awkward, the Tormenta keeper smothered the ball to preserve the lead.

South Georgia received a pair of yellow cards down the stretch for preventing Richmond from taking free kicks, and Micaletto earned his second yellow of the match and a subsequent red card in stoppage time.

The red card gave Richmond a free kick on the edge of the box, but midfielder Ryley Kraft’s effort glanced off the Tormenta wall and over the goal. South Georgia bled out the clock to see out the slim advantage.

The problem isn't that Washington is bad. It's that they still think they're good.

Rivera even squinted his eyes hard enough to see a productive day from Allen, awarding him a luxury that was not given to Dwayne Haskins.

"I have not quit on the kid as far as his development."

The first round of the Dominion Energy Charity Classic at the Country Club of Virginia was postponed due to rain.

The high and mighty Los Angeles Dodgers, a national brand so good for so long, start the World Series on Tuesday against the Tampa Bay Rays, w…

Phillips: Ron Rivera is a respected coach, but he hasn't made a lot of sense recently

Yes, we were entertained.

Kickers forward Emiliano Terzaghi (left) tries to gain possession between South Georgia defenders Abuchi Obinwa and Lars Eckenrode during their USL League One match at City Stadium. Terzaghi, who leads the league with 10 goals, exited with an injury.