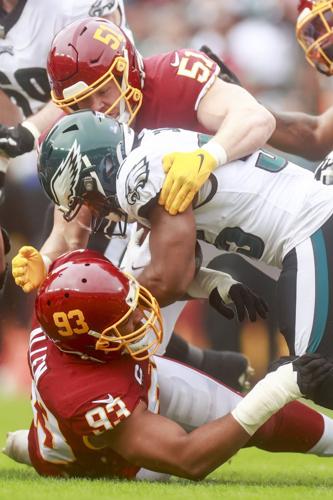 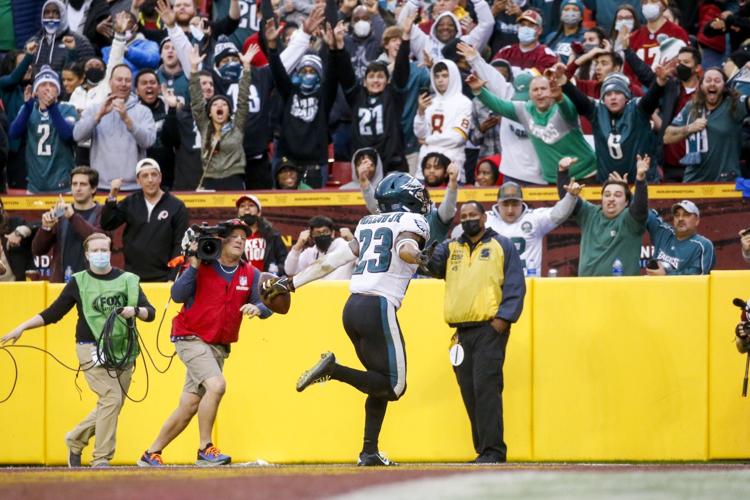 Philadelphia Eagles safety Rodney McLeod (23) reacts after making a game winning interception in the end zone in the second half of a NFL football game between the Philadelphia Eagles and the Washington Football Team on Sunday, January 2, 2022 in Landover, Maryland. 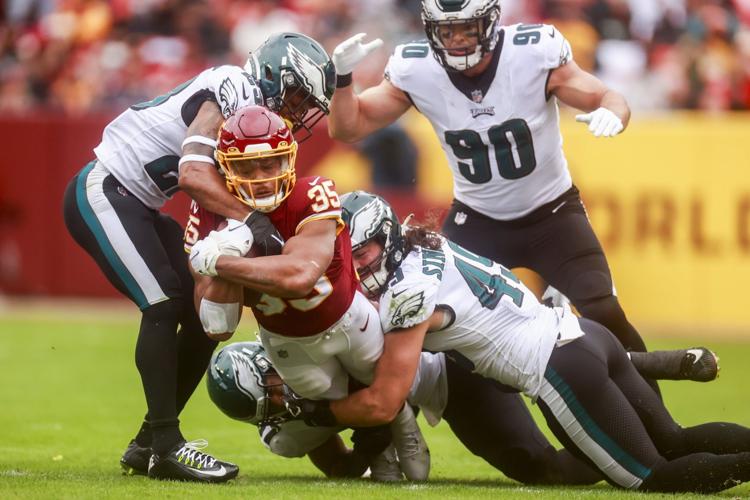 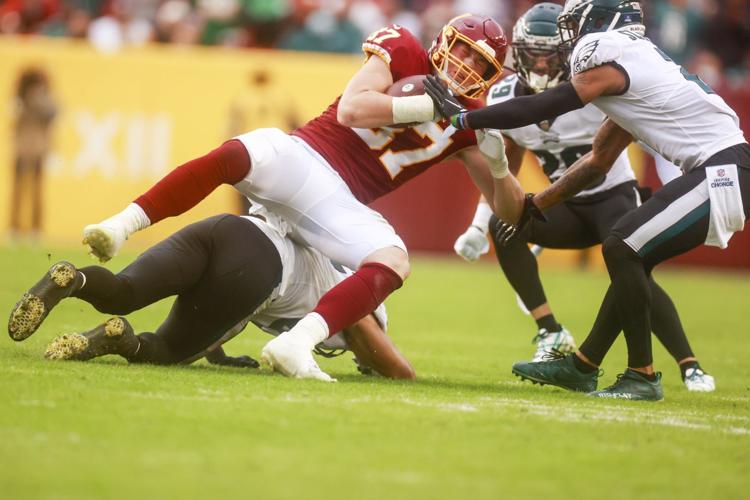 Washington tight end John Bates is stopped by Philadelphia defenders in the second half of the Eagles’ NFC East victory at FedEx Field in Landover, Md.

The Football Team era has ended at FedEx Field.

Washington will unveil a new name and logo in the coming months, but attempts to send fans out on a positive note were unsuccessful on Sunday, as the team lost 20-16 to the Philadelphia Eagles.

The Football Team was foiled by a University of Virginia tandem in the Philadelphia secondary that logged the game-ending interception with 24 seconds remaining.

Anthony Harris (L.C. Bird) ran with Washington tight end John Bates. A throw from Taylor Heinicke appeared to be a touch high, and Bates tripped as Harris reached in to deflect the pass.

It sailed over their heads into the diving arms of Rodney McLeod, who came down with the football, and the victory.

“Honestly my guy Anthony had great coverage, and I was able to capitalize on that,” McLeod said.

McLeod was voted a team captain this preseason despite missing the offseason with an ACL tear. He’s now rounding into form at a key moment for Philadelphia, which at 9-7 is either one win, or some other losses, away from a playoff berth.

On the Washington sideline, coach Ron Rivera was angry that the play wasn’t ruled a penalty. He said he felt Harris tripped up Bates.

“I thought the guy undercut him a little too early,” Rivera said.

Rivera complimented Heinicke as having played a “solid, sound” game. The quarterback finished 27 of 36 for 247 yards, with no touchdowns and one interception.

At times, he showed the grit and resolve that has made fans love his underdog story, extending plays and keeping drives alive, but at key moments, including a fourth-and-5 at midfield in the second half where he threw short of the sticks, he showed why Washington will likely be in the market for a quarterback as soon as the season ends.

Heinicke and the offense came out blazing early.

Washington sprinted to a 10-0 lead, then a 16-7 halftime margin, but in the second half, the offense sputtered to a stop, and the Eagles were able to grind out just enough offense to claim the victory.

“The guys played hard and they gave themselves a chance at the end,” Rivera said. “That’s all you can ask for.”

Both of Philadelphia’s touchdowns came on fourth-and-goal conversions.

Washington (6-10) is eliminated from playoff contention, though the team’s hopes were slim entering the game, and Washington was without running back Antonio Gibson because of COVID-19.

The Football Team also lost tight end Ricky Seals-Jones to a scary neck injury. He collided with a cameraman on the sideline, then fell and hit his head on the solid portion of the sideline, behind the grass.

Rivera said the decision to cart off Seals-Jones was “precautionary,” and that he was walking around in the locker room at halftime, and the early prognosis is that he will be OK.

Washington running back Wendell Smallwood gave the day its lasting visual, when he was hit and the numbers flew off his helmet. Smallwood was one of the replacement players signed by the team after its COVID difficulties.

Those helmets will soon look different anyway, as Washington has one more game, in New York, next week before beginning the offseason, and adopting a new name and logo.

The 200-acre site, purchased for $100 million, would include retail, a large amphitheater and the team's headquarters and practice fields.

The Washington Commanders have drawn up plans for a second potential stadium site, this one in Virginia’s Loudoun County, according to renderi…

"I don't have confidence in the Washington Commanders as a viable NFL franchise," a key senator said.

Reports: Dwayne Haskins got into nightclub fight hours before death

According to a report, Dwayne Haskins' blood-alcohol level was .24 when he was killed on a Florida highway.

Teel: Virginia should be smarter than to invest in Dan Snyder and new Commanders stadium

With Commanders stadium in the balance, will vote be for economic development or against Dan Snyder?

The concept of a state contribution to economic development by the team remains broadly popular. The hurdle appears to be not the project but doing business with team owner Dan Snyder.

ASHBURN — The first day of practice is a time to set the tone, and that’s exactly what several members of the Washington Commanders were going…

Hallman: NASCAR's all-star race has been a challenge too tough to tame for organizers

I don’t know what will work for a NASCAR Cup Series all-star event, but I know what didn’t.

Colin Kaepernick secures Raiders workout after 5 years out of NFL

Philadelphia Eagles safety Rodney McLeod (23) reacts after making a game winning interception in the end zone in the second half of a NFL football game between the Philadelphia Eagles and the Washington Football Team on Sunday, January 2, 2022 in Landover, Maryland.

Washington tight end John Bates is stopped by Philadelphia defenders in the second half of the Eagles’ NFC East victory at FedEx Field in Landover, Md. 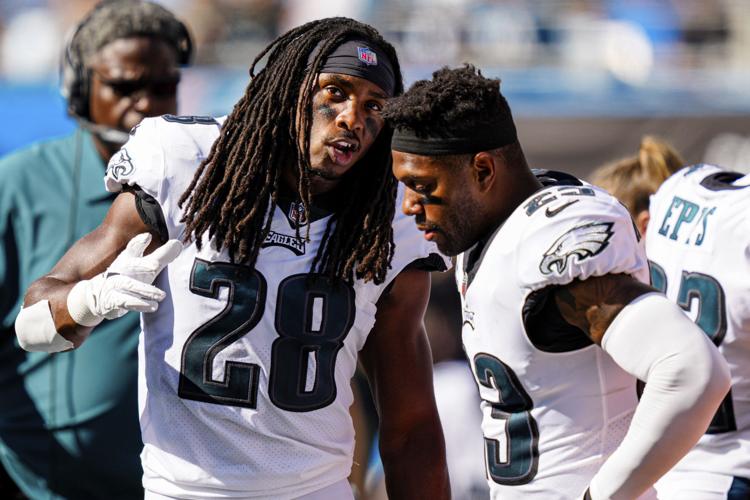 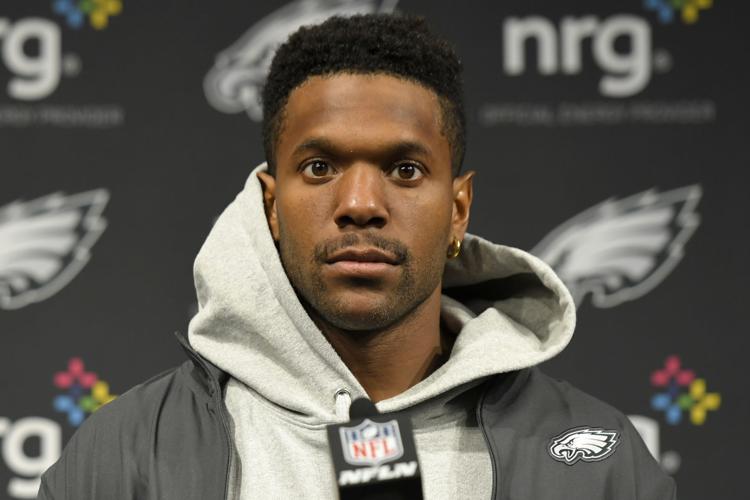