Jonathan Allen (pictured) and Daron Payne are the only interior lineman duo in the NFL with more than five sacks each this season. 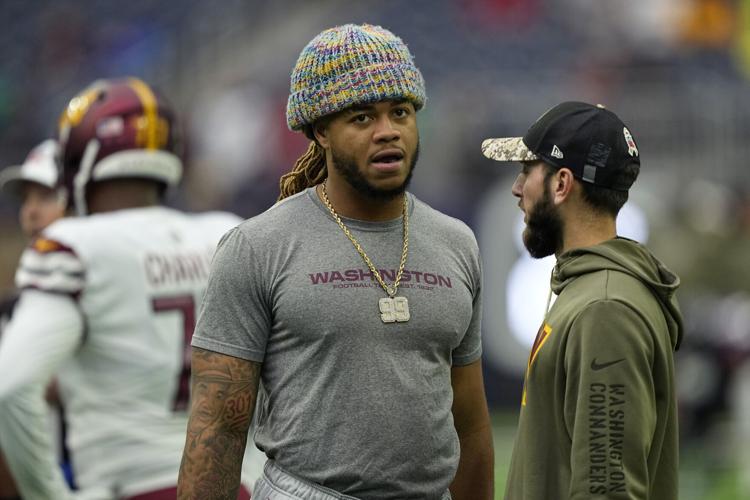 Washington Commanders defensive end Chase Young will join the 53-man roster when the team practices on Wednesday, but coach Ron Rivera said that doesn’t mean Young will play on Sunday.

For a moment on Sunday, the biggest concern about the Washington defensive line was that they’d run out of celebrations.

Five sacks brought five parties on the sideline, as the team reenacted a “Spiderman” meme, did double-Dutch jump roping, and wiped each other’s shoes.

“You know you’re making plays when you get to pull them out,” defensive tackle Daron Payne said.

Not to worry, though — the group shared after the game that many more remain in development and they’ll be ready to reload when the Atlanta Falcons visit on Sunday.

For the past three years, fans have been waiting for the group to blossom, and it appears that it’s finally happening.

Allen has often said of the unit’s potential that “potential is something they say about somebody who hasn’t done anything yet.”

Now, after a tumultuous training camp that included the firing of the unit’s position coach, Sam Mills III, the promotion of Jeff Zgonina to that role, and the hiring of Washington legend Ryan Kerrigan to assist, the group is hitting its stride.

“You’ve got to have two quality defense tackles, and we’re fortunate,” coach Ron Rivera said of Payne and Allen. “We have two guys that set the tone for our offense.”

Asked if this is the best they’ve been playing since the group was put together, defensive tackle James Smith-Williams turned the question on a reporter: “You watch the film. You tell me.”

After he answered in the affirmative, Smith-Williams responded, “I agree with you.”

Cornerback Kendall Fuller (Virginia Tech) said it’s made life easier for everybody on the defense.

“They will come to me and they say, ‘You eat, we eat,’” Fuller said. “That’s just the mindset both groups have. They want to see us eat, and we want to see them eat.”

Allen and Payne are both first-round draft picks, but have had to take on an even bigger role this year after rookie Phidarian Mathis was injured in the first game. Allen said he’s enjoyed watching Payne have a career season.

“I think Daron is hitting his stride, and he’s really elevated his game to a high level,” Allen said. “He’s really been able to help me play better. Seeing him dominate, week-in, week-out, all year, is making me rise my game to him. He’s played phenomenal, and I’ve got to match his energy each week.”

The future is murky for the group, with both Payne and Sweat playing on expiring contracts, but they’ve said they’re intent on making the most of their time together this year.

Asked about one of his big plays against the Texans guard, Payne responded with a smile.

Now comes the challenge, and opportunity, of bringing defensive end Chase Young back into the fold.

Young will be eligible to play Sunday, but Rivera said the team would only put him on the game-day roster if he can prove in practice this week he’s healthy enough as he continues to recover from last year’s knee injury.

Whenever Young does return, Rivera said it will be a gradual reintroduction, so as not to mess with what’s currently a good thing.

“We have a really good mixture of guys right now that are playing really well as a group,” Rivera said. “And I know that’s the last thing that anybody wants, especially Chase, is to come in and be disruptive. So, we’ll do it gradually and we’ll have to be smart, but we’ll do this the right way.”

11 key dates in the timeline of Dan Snyder, Commanders

Dan Snyder’s ownership of Washington’s NFL franchise has been a matter of considerable debate for years.

Look for holiday deals in the Wednesday Times-Dispatch 🦃

Jonathan Allen (pictured) and Daron Payne are the only interior lineman duo in the NFL with more than five sacks each this season.

Washington Commanders defensive end Chase Young will join the 53-man roster when the team practices on Wednesday, but coach Ron Rivera said that doesn’t mean Young will play on Sunday.