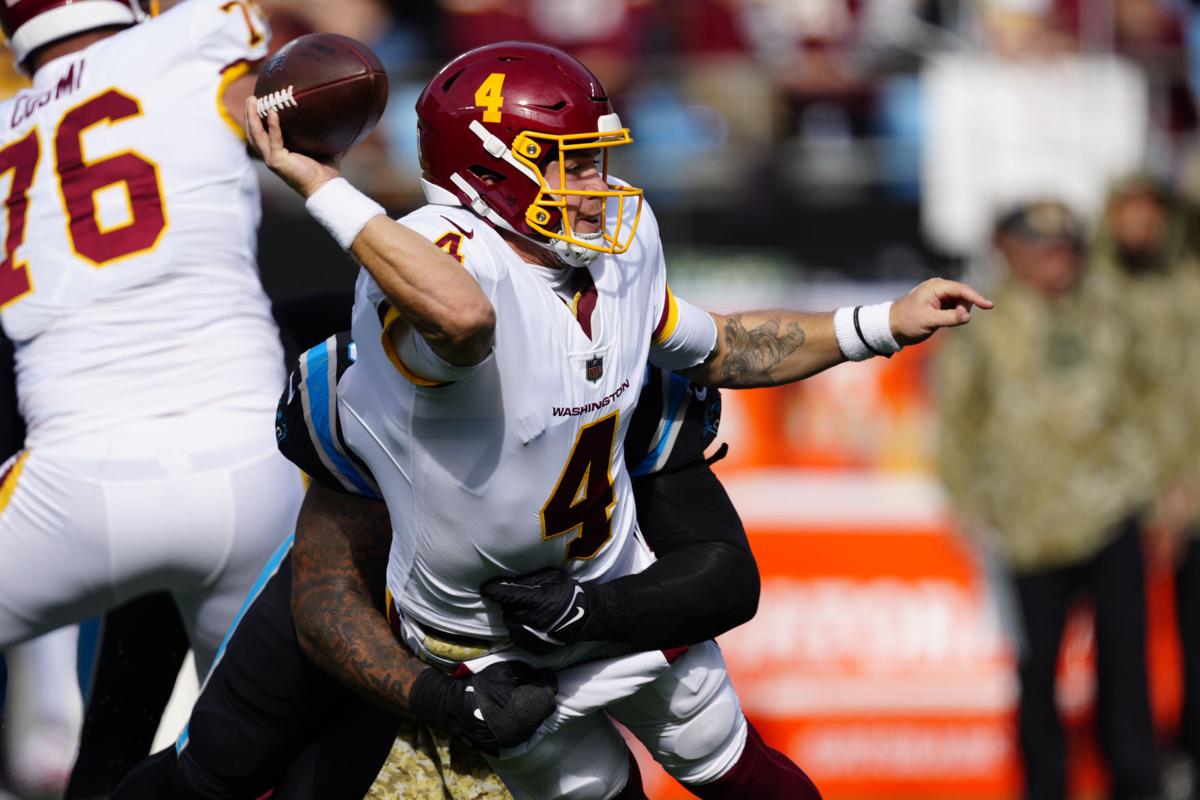 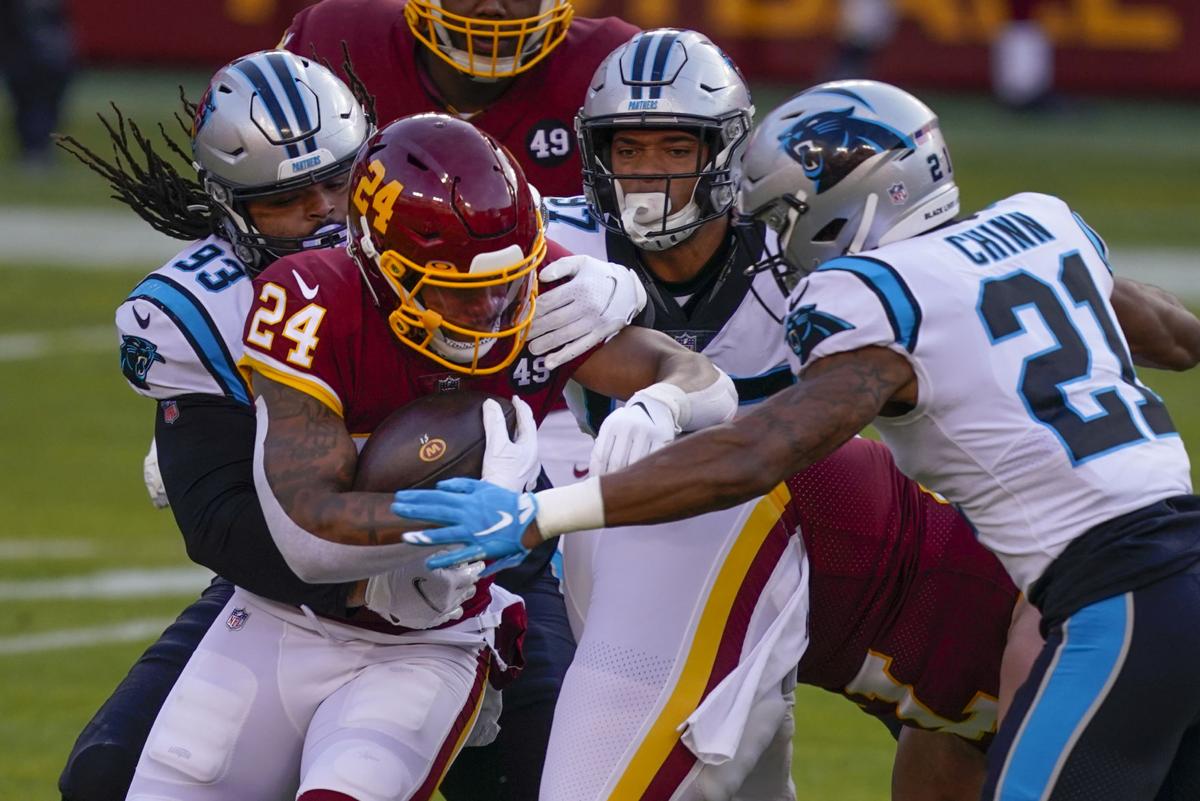 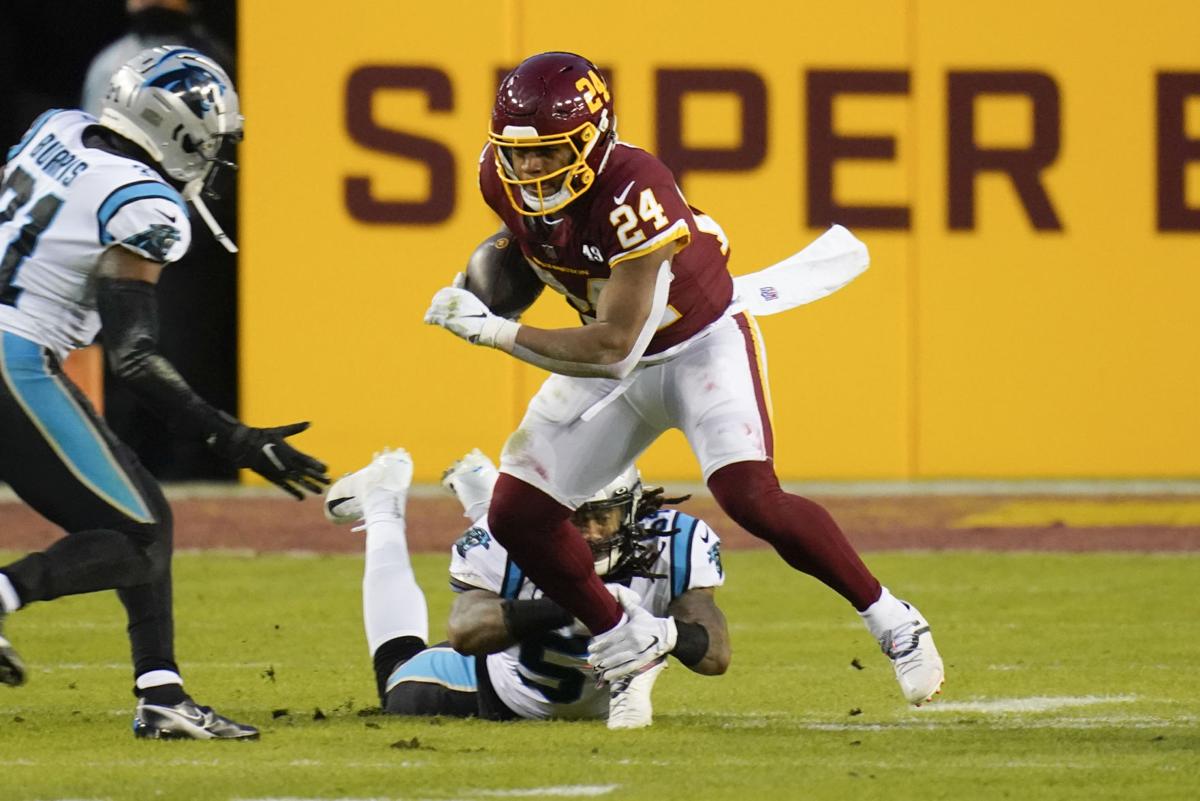 CHARLOTTE, N.C. — Antonio Gibson now leads the NFL in fumbles lost. But what he did after his mistake Sunday will keep him in the lineup for the foreseeable future.

Gibson coughed up the ball inside the red zone in the first quarter of a 27-21 victory over the Carolina Panthers. Washington coach Ron Rivera moved Gibson to the bench, where he watched the rest of the first half while J.D. McKissic and Jaret Patterson took the team’s carries.

The fumble was Gibson’s fifth of the season, more than all NFL players except Arizona quarterback Kyler Murray (7). It was Gibson’s third that was recovered by the opposing team — he leads the league in that category.

And yet, when he returned after halftime, he showed the dynamic skills that have led to comparisons with Carolina star Christian McCaffrey.

“He bounced back, and that’s what you want,” Rivera said. “You want that resilience. And he’s a young man that’s just going to get better and better the more he develops and grows.

“You know, I wish he hadn’t fumbled because it would have been a very good day for him. He had a good day, though. He really did. And he’s an exciting young man to watch.”

Rivera did not hold Gibson responsible for his second miscue. At the end of the game, Gibson stepped out of bounds during an attempt to run the clock down and keep the ball away from Carolina.

“Well, he got freakin’ horse-collared around the neck and thrown out of bounds,” Rivera said.

“It’s not the first guy taking him down, or those shoestring tackles you may have saw last year, there aren’t many of those anymore,” McLaurin said. “He just has to continue to protect the ball and run like he’s running, because behind that O-line, the way they’re humming right now, we’re going to have a chance to hit some runs.”

No NFL player likes to talk about his health, for fear of inviting a jinx, but it’s notable that Taylor Heinicke hasn’t missed a snap because of injury this season. Heinicke, who was injured nearly immediately in his previous two seasons as an NFL starter, attributed that to the two trainers with whom he works in Atlanta. They helped him add 15 pounds of muscle this offseason. The trainers, Dr. Joel Seedman and Earl Williams, were at the game. Heinicke gave them his jersey after as a thank-you.

The two wins have helped mask that Washington continues to do dumb things. The defense had a 15-yard penalty on all three of Carolina’s scoring drives Sunday.

That said, the award for worst decision of the day goes to Carolina coach Matt Rhule, who took Cam Newton off the field on a fourth-and-3 late in the game. After the fans booed, Rhule wasted a timeout, which became critical later, and put his offense back on the field. The play? A pass that was caught by Christian McCaffrey — a yard short of the sticks. Can’t win football games like that.

Defensive tackle Jonathan Allen said basically the same thing he did after the Tampa win: “Coming into the game, we wanted to be the more physical team.” It’s clear Washington is finding its identity in that, and it’s paying off.

Center Tyler Larsen was injured in the second quarter, leading to guard Wes Schweitzer sliding into the position to play it for the rest of the game. Schweitzer’s shoe came off at one point, which led backup Keith Ismael to get rushed onto the field as the emergency center. Heinicke believes it’s the first three-center game of his career.

Nothing is coming easy for Washington WR Terry McLaurin, but he's dominating anyway

As part of the NFL’s Next Gen Stats, the league assigns an “expected catch percentage” to a receiver every time the ball is thrown his way.

Even in victory, Taylor Heinicke has made a handful of bad plays during the past few weeks. The problem, or at least coach Ron Rivera’s proble…

CHARLOTTE, N.C. — One of the most fun and fascinating football games of 2021 emerged out of seemingly nowhere Sunday afternoon in a chilly, wi…