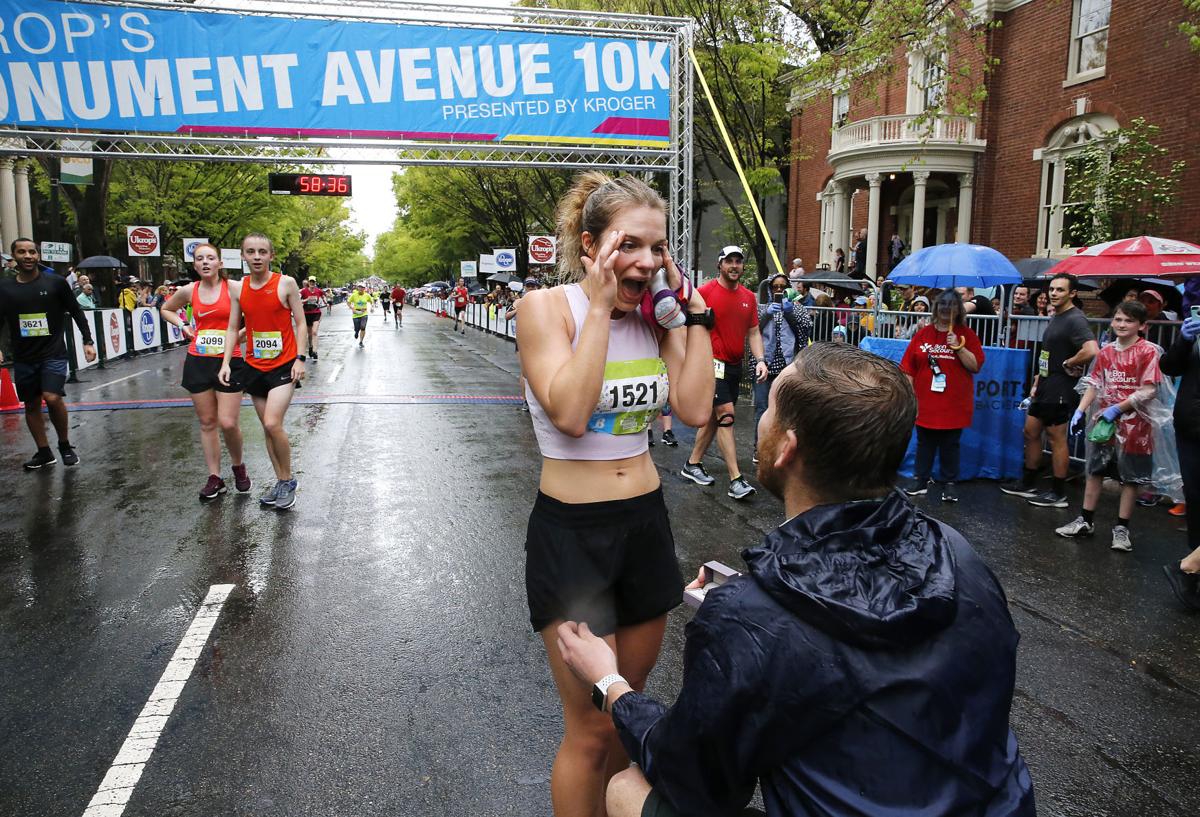 Caleb Lunsford proposed to Meredith Celko as she crossed the finish line at this year’s Monument Avenue 10K. She said yes, and the couple embraced as onlookers cheered. 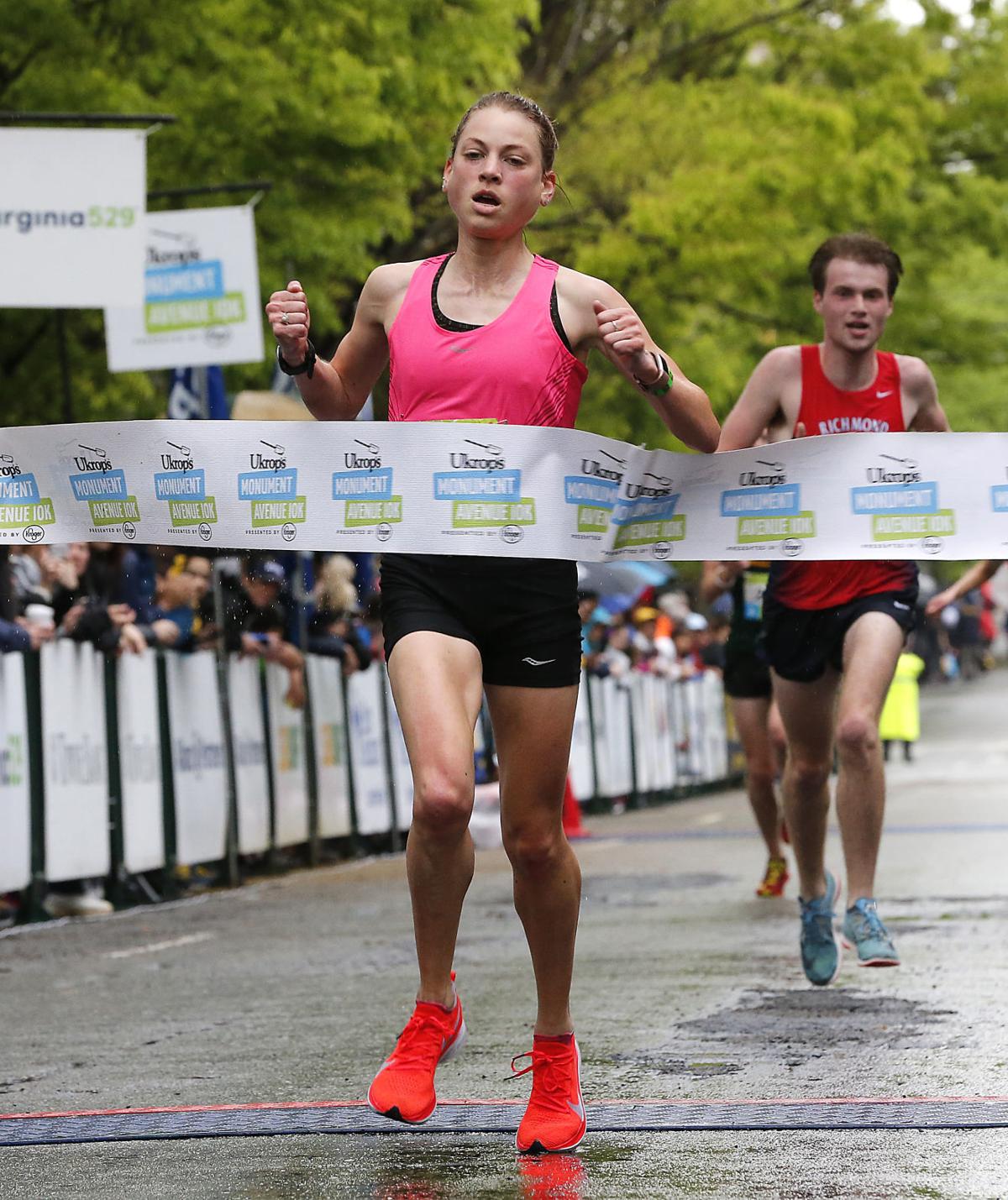 After breezing past the competition to win last year’s 10K, Bethany Sachtleben had to dig deep this time around. Down the stretch, she thought of her cat’s veterinary bills. 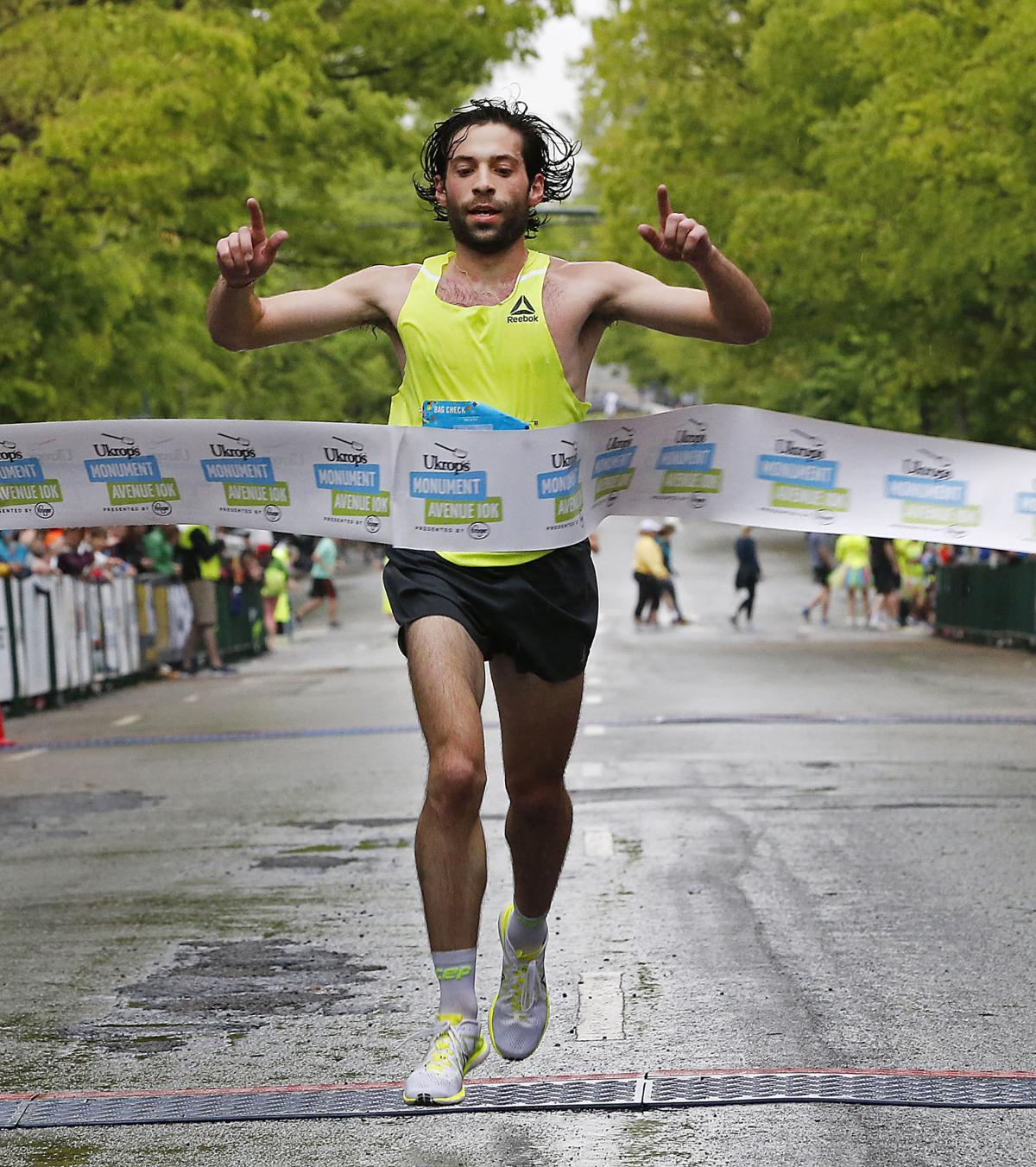 Philo Germano, 23, said he plans on using the $2,000 winner’s purse to pay off student loans. He is currently taking online classes at Blue Ridge Community College. 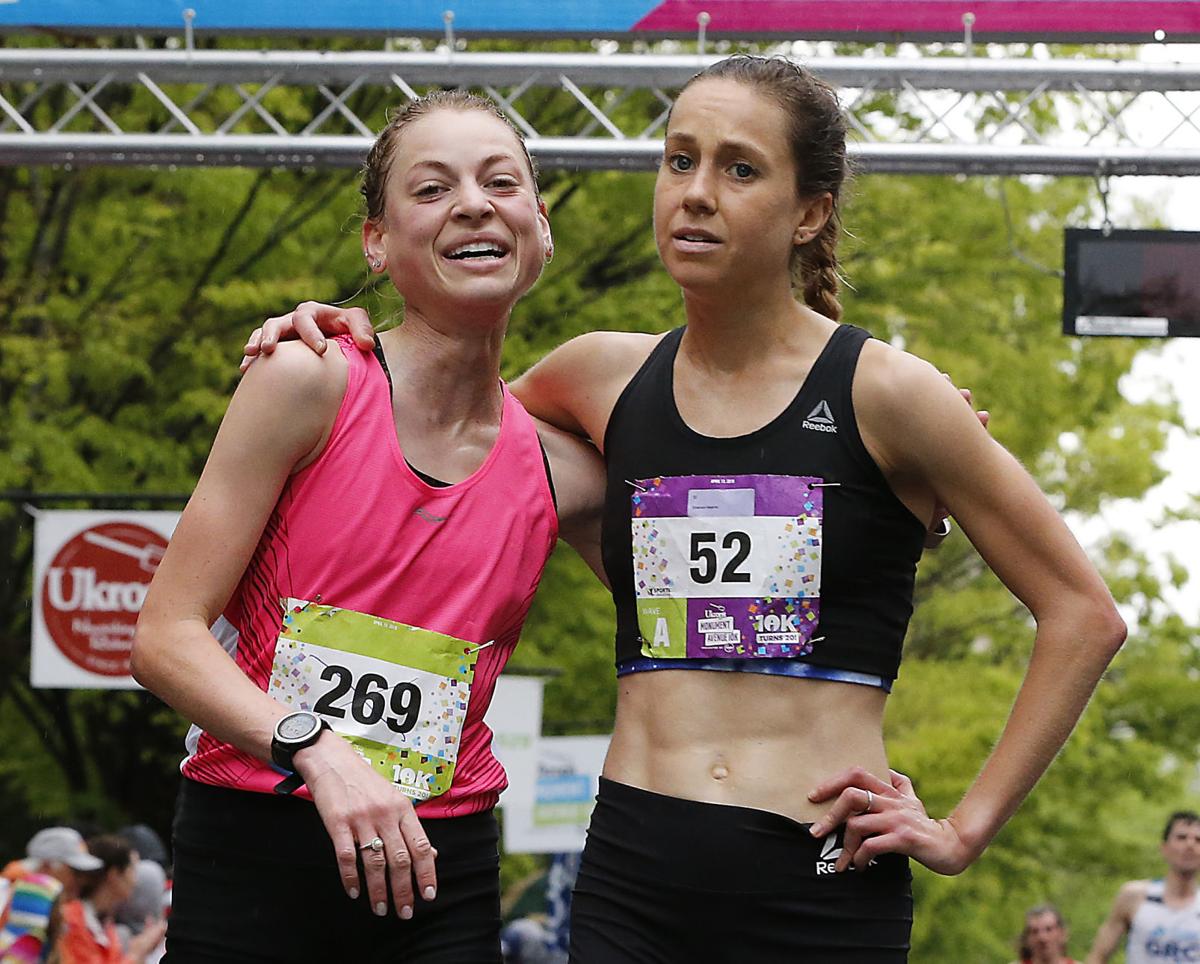 At the rate she’s going, Bethany Sachtleben may want to start lobbying for more running races in Richmond.

Motivated down the stretch by her cat, the Fairfax resident added to her haul of Richmond titles by edging Shannon Malone for her second consecutive Ukrop’s Monument Avenue 10K victory and her fourth consecutive victory here. Sachtleben, who finished in 32:39 — 4 seconds ahead of Malone — won the marathon in 2017 and the half marathon in November.

Philo Germano, a Syracuse graduate who recently moved to Charlottesville, made his first visit to Richmond memorable. He won the men’s race in 29:34. Tim Young of Fredericksburg was second in 29:45.

Sachtleben dominated the 10K last year, smoking the field by 1:47. There was no time for a catnap in this one.

She and Malone (Pittsburgh) were neck-and-neck throughout the first half of the 6.2-mile race. Sachtleben thought the pace was too fast at about 4 miles, so she dropped about 15-20 meters behind.

As she caught up with less than a mile left, the thought of her cat’s veterinary bills spurred her on. Sachtleben was eligible for the $2,000 first prize awarded by the Collegiate Running Association.

The CRA runs its national championship 10k road race as part of the Monument event and awards NCAA-sanctioned cash prizes to the top 10 male and female finishers who currently are enrolled in at least one college class.

Sachtleben, who has a full-time job as a financial analyst, is taking a class at Northern Virginia Community College.

“[The money] is so helpful,” she said. “My cat just had to go to the vet like four times in two weeks. When I was in second place, I was like, ‘I need that money for my cat’s medical bills.’ ”

Her time was 58 seconds faster than last year and not far off the race record of 32:24, set by Magdalene Makunzi in 2007.

“The races keep getting faster and tougher every year,” Sachtleben said. “[Malone] was so fast. I thought she was going to dust me. At 4 miles, I was like, ‘This pace is too hot for me.’ I just really wanted to win, so …”

Malone and Jack Bruce (Fayetteville, Ark.) each pocketed $1,000 as the second-place finishers in the CRA race.

Sachtleben, 27, became a standout at George Mason after asking to join the team. After working all day, she gets her workouts in as a volunteer coach for the Patriots.

Her goal is to make the U.S. marathon team for the 2020 Summer Olympics in Tokyo. The “A” qualifying standard for the team trials is 2:37, and Sachtleben already has run 2:31:20.

“This is all building to that,” she said.

After graduating and spending a year starting on his master’s at Syracuse, he put that on hold and joined his Syracuse coach, Chris Fox, this past summer. Fox was hired to start the Reebok Boston Track Club in Charlottesville.

Germano, 23, trains during the morning and works at a running store in Charlottesville. He’s taking accounting classes online at Blue Ridge Community College. The $2,000 payday will come in handy.

“I’ve got some student loans,” he said.

Germano and Young, his teammate, set the pace early. Germano got some separation after the halfway point and maintained a fairly comfortable distance.

“I would like to stretch out track as long as I can,” Germano said. “I need to get better if I want to compete on the national and potentially on the international stage.

“I just want to keep racing and try to get faster.”

Caleb Lunsford proposed to Meredith Celko as she crossed the finish line at this year’s Monument Avenue 10K. She said yes, and the couple embraced as onlookers cheered.

After breezing past the competition to win last year’s 10K, Bethany Sachtleben had to dig deep this time around. Down the stretch, she thought of her cat’s veterinary bills.

Philo Germano, 23, said he plans on using the $2,000 winner’s purse to pay off student loans. He is currently taking online classes at Blue Ridge Community College.