McElroy: Former UVA swimming star Lauren Perdue feels for athletes whose Olympic dreams are delayed
0 comments
Share this
Only $5 for 5 months
1 of 2 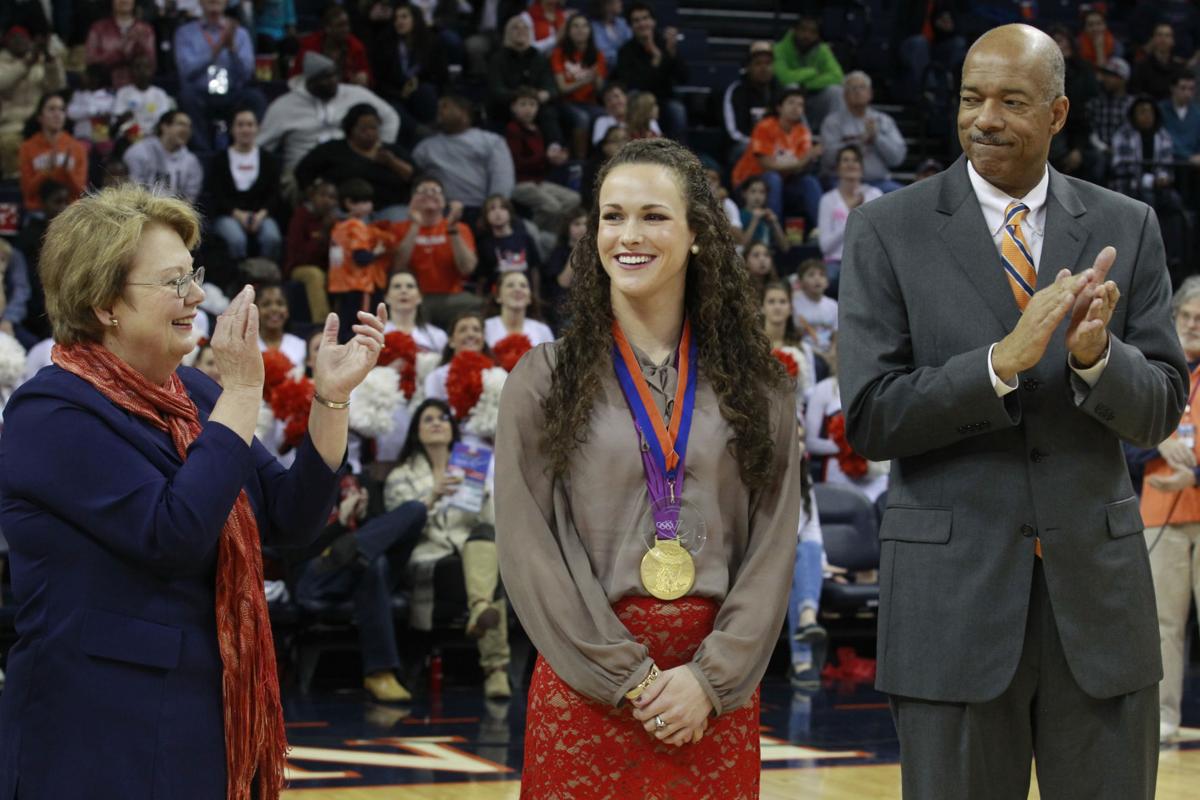 ABOVE: UVA swimmer Lauren Perdue shows off the gold medal she won at the 2012 London Olympics while being honored at a 2013 ceremony at the University of Virginia with university President Teresa Sullivan (left) and director of athletics Craig Littlepage. BELOW: Virginia’s Lauren Perdue competes in the 200-yard freestyle at the 2011 NCAA swimming and diving championships in Austin, Texas.

Swimmer Lauren Perdue, who attended UVA, won a gold medal at the 2012 Olympics.

Question: What is the preparation like when you’re four months away from the Olympic Games?

Answer: It’s a daily commitment. Any sport, to get to that level, it’s years and years of training multiple hours a day, 20 to 24 hours a week. To get to the point that we’re at now, where these athletes are having to put everything on pause and look toward a future date, it’s devastating. I can completely relate to what they’re going through, just from a training standpoint — all the dedication and sacrifice that goes into training for such a big event in an athlete’s life.

Question: You had a pretty significant injury months before the Olympic Games.

Question: When you’re a swimmer, you need a pool. How can you go about this in terms of training and preparation — how can swimmers stay in shape — when you don’t have a pool?

Answer: I’m biased, but swimming is one of the most difficult sports because of that reason. We can’t take off a lot of time per year. We can’t really crosstrain to the point where it is beneficial and helping us in swimming without a pool. You have to have a pool. You have to be able to do what you do on a daily basis. You have to be able to do your sport, and that means in the water. I just can’t imagine what these athletes are going through. Most competitive swimmers rarely take more than a couple weeks off per year from swimming, so to not have access to a pool for a matter of two months, three months, it’s devastating.

Question: How is this going to affect a swimmer’s training plan leading up to the Olympics?

Answer: It’s tough. It’s definitely a mental battle as much as a physical battle. What these athletes are going though and all the preparation leading up to this moment for the 2020 Games, and then having to put everything on hold for another year — I just can’t imagine what they’re going through mentally right now.

Question: What’s your favorite memory from 2012? Is there a moment you always think back to?

Answer: I have two equally special moments. The first would be qualifying for the Olympics. Like I mentioned earlier, I had a severe back injury that required surgery 3½ months before the Olympic trials, which are held at the end of June every four years.

I didn’t think I was going to make the team. My dreams were dashed. Every hope and goal that I had to make that Olympic team was gone, in my opinion.

Long story short, I miraculously was able to heal fast enough to swim lifetime-best times at trials and ended up making the Olympic team that year. To put words to how special that was for me after everything that I went through — it’s just impossible. That was my No. 1 special moment in 2012.

No. 2 would be being able to walk in the opening ceremonies. Being able to walk with Team USA, all of the sports combined, surrounded by so many other athletes from other countries, and being able to all unite together walking into the Olympic Stadium as one. As one body of athletes. As one world.

McElroy: 'False positive' tests foiling some sports stars as they return to play

There’s no doubt with a virus, that is still so fairly new with much unknown, it is better to be safe than sorry. At the same time, false positives could have major ramifications.

McElroy: College football needs a commissioner. It will never happen.

Often in life we open our mouths and say things we know that’ll never happen, like, “You know what I would do if I won the lottery?” or “I’m g…

Former Washington cornerback Fred Smoot is one of the leading advocates for “Red Wolves” as a replacement for “Redskins.”

Julie Donaldson, who has anchored Washington football coverage for NBC Sports Washington for the past decade, will serve as the team’s new sen…

Ever go in search of one thing and find something else?

ABOVE: UVA swimmer Lauren Perdue shows off the gold medal she won at the 2012 London Olympics while being honored at a 2013 ceremony at the University of Virginia with university President Teresa Sullivan (left) and director of athletics Craig Littlepage. BELOW: Virginia’s Lauren Perdue competes in the 200-yard freestyle at the 2011 NCAA swimming and diving championships in Austin, Texas.