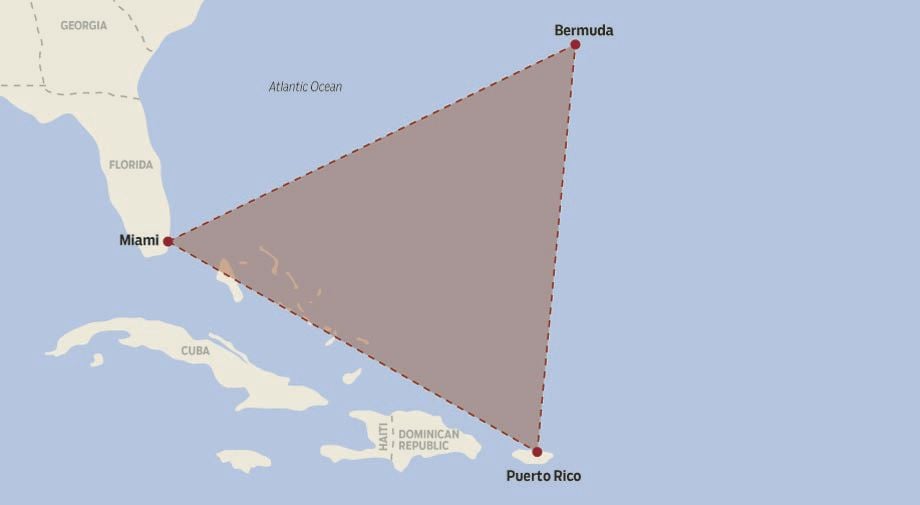 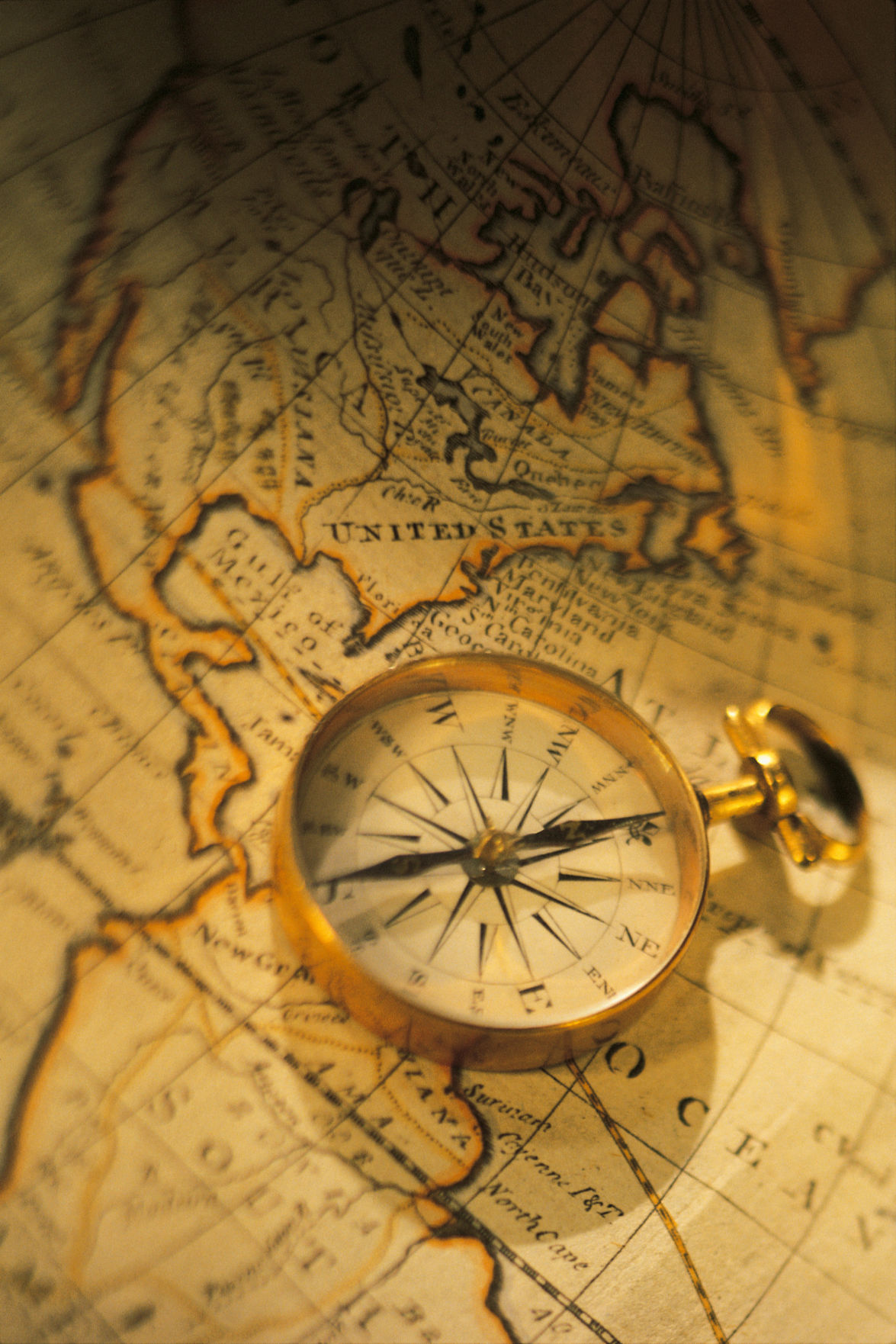 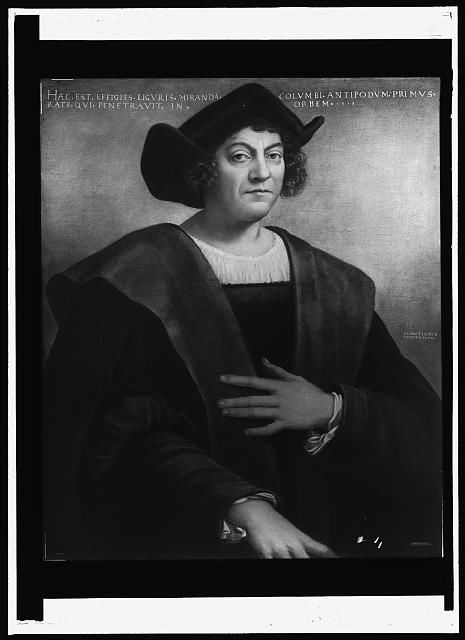 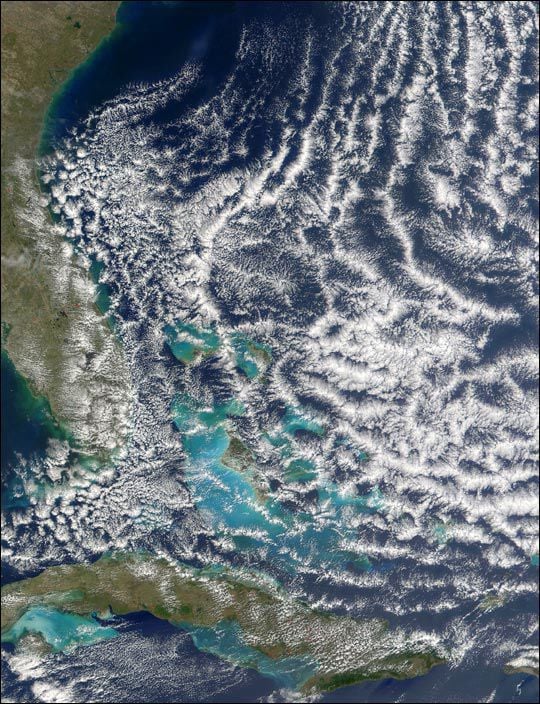 Hexagonal cloud formation over the Bahamas 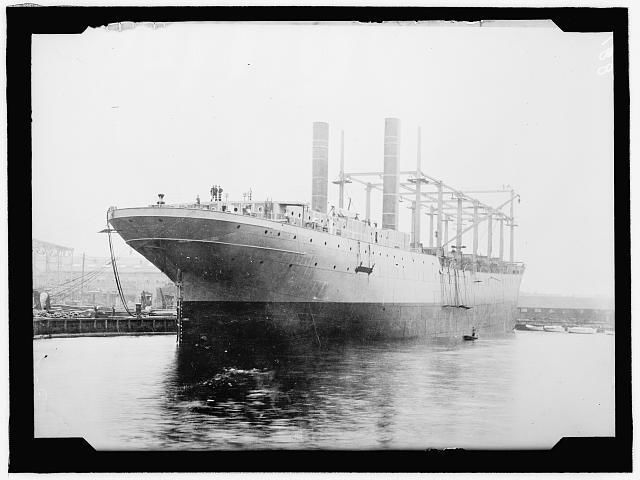 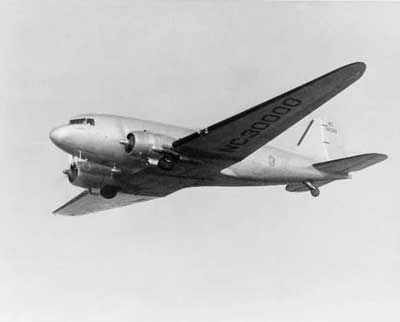 A Douglas DC-3 disappeared over the Bermuda Triangle in 1948.

Also known as the Devil’s Triangle, the Bermuda Triangle is a notorious section of the Atlantic Ocean covering about 500,000 square miles off the southeastern coast of Florida. The area is outlined by Miami, Bermuda and Puerto Rico.

While some believe the Triangle is a real place, others believe it is just a myth. According to the U.S. Board of Geographic Names as well as other agencies, the area does not officially exist. It also is not included on any official map.

Despite not being recognized by agencies, this area is known for its unexplainable disappearances. Planes, ships and people have seemingly vanished from the area, some in good weather, without even sending out distress signals. After the first few incidents, a pattern seemed to form that vessels traveling through the Triangle would either disappear or be found abandoned.

But despite whether the Bermuda Triangle actually exists, the area has been able to attract the public’s attention for hundreds of years.

The area of the Bermuda Triangle is one of the two places on Earth where the lines of true north and magnetic north align.

True north is the geographic location where the lines of longitude converge in the north, which is the North Pole. Magnetic north is a point in Northern Canada where the northern lines of attraction enter Earth.

A compass works because its magnetic needle is attracted by the magnetism of the Earth. When it points to the magnetic north, it is different from the geographic north. However, in a section of the Bermuda Triangle, a compass points to true north instead. The difference between the two readings is known as compass variation. Navigators must compensate for this error or they will go off course.

Unusual events in the Bermuda Triangle date to Christopher Columbus and his voyage to the New World that began in 1492. When he sailed through the area on his first trip, he reported that a great flame of fire crashed into the sea one night. Many scholars believe that this was a sighting of a meteor falling. Columbus’ writings also noted a strange light that appeared in the distance a few weeks later and erratic compass readings. The shallow areas of sea with no land nearby confused Columbus and his crew as well.

Early writings about the Bermuda Triangle may have included a work by William Shakespeare. Some scholars believe his play “The Tempest,” which was first performed in 1611, was based on a real-life Bermuda shipwreck.

In 1609, the Sea Venture was part of a fleet carrying supplies to the Jamestown colony in Virginia. During a storm, the ship wrecked on the eastern edge of the Bermuda Triangle. However, 150 passengers survived by taking a small boat to one of Bermuda’s islands.

The similarities between “The Tempest” and the Sea Venture wreck may have increased the mystery associated with this area.

Although the U.S. Board of Geographic Names does not recognize the Bermuda Triangle as an official name and does not maintain any official file on the area, the phrase is still widely accepted.

The name itself may have come from its Bermuda point because of the islands’ dangerous reefs. Once known as the Isle of Devils, Bermuda is surrounded by reefs that have caused hundreds of shipwrecks.

The term “Bermuda Triangle” was first used in 1964 by Vincent Gaddis in an article for Argosy magazine. In the article, which was later expanded and included in his book, Gaddis noted the unexplainable disappearances of several ships and planes in the area. After National Geographic brought attention to Gaddis’ book in 1967, many newspapers wrote articles about the incidents in the area.

In 1971, a documentary film called “The Devil’s Triangle” was released. A few years later, Charles Berlitz wrote a best-seller about the area, which popularized the belief in its existence. Since then, numerous books and films have been created about the mysterious area.

The Bermuda Triangle is known for the mysterious disappearances of ships and planes. Today, some people believe this area sees an unusually high number of unexplainable incidents. However, there is no evidence that incidents occur more frequently in the Bermuda Triangle than in other well-traveled areas of the ocean. Still, there are documented disappearances of both aircraft and ships in the area. Some notable ones are listed below.

One of the most well-known disappearances is that of the USS Cyclops. In March 1918, with more than 300 men onboard, the Navy cargo ship vanished somewhere between Barbados and the Chesapeake Bay. Despite being equipped to do so, the Cyclops never sent out a distress signal and no wreckage was ever found. Regarding the incident, President Woodrow Wilson said, “Only God and the sea know what happened to the great ship.” In 1941, two sister ships also disappeared along nearly the same route.

In December 1945, five U.S. Navy torpedo bombers carrying 14 men disappeared. The squadron, also known as Flight 19, took off from Fort Lauderdale, Fla., to conduct practice bombing runs over nearby shoals. The flight leader’s compass apparently malfunctioned soon into the flight, causing the squadron to get lost. After sending several distress messages, the aircraft and crew vanished. The same day, another plane was sent to search for them, but it also disappeared. A Navy report later said it was “as if they had flown to Mars.” As the Bermuda Triangle legend grew in the 1960s and 1970s, Flight 19 became one of the most notorious disappearances.

A DC-3 plane carrying 27 passengers disappeared near the end of a flight from San Juan, Puerto Rico, to Miami on Dec. 28, 1948. The pilot had told the repair crew that a landing gear warning light was malfunctioning and the aircraft batteries were discharged; however, he was unwilling to delay takeoff. Air traffic controllers in Miami heard transmissions from the flight, including a report that the plane was 50 miles south of Miami. After that report, the plane vanished and has never been found.

A tanker carrying molten sulfur and a crew of 39 people disappeared off the southern coast of Florida in February 1963. According to the U.S. Coast Guard’s investigation, the ship was in questionable condition, with common fires and a weak keel. Wreckage was never found.

In 1965, a crew from the Air Force Reserve Command’s 440th Airlift Wing departed from Milwaukee to fly to Grand Turk Island in the Bahamas. Despite routine communication and no indication of trouble, the crew never reached its destination. Only a few scraps of debris were found, leaving no explanation of the disappearance.

A 590-foot cargo ship carrying iron ore and a crew of 37 people disappeared in the area of the Bermuda Triangle in 1976. The Sylvia L. Ossa had departed from Brazil to travel to Philadelphia. A Navy plane later recovered an overturned lifeboat from the ship 140 miles west of Bermuda. A life preserver with burn marks on it also was found.

There are many theories that attempt to explain all the disappearances that have occurred in the Bermuda Triangle. While some theories are scientific, others are more supernatural.

Environmental effects: The Gulf Stream, found in this area, can cause violent and unexpected storms. Waterspouts, or tornados at sea, are common. Other possible environmental effects include underwater earthquakes or massive waves. The area is also home to some of the world’s deepest trenches, possibly obscuring sunken ships and planes.

Human error: Whether it be the environmental effects or equipment malfunctions, the ocean can be hazardous to even experienced sailors. People can easily get off course or worse.

Popularity: Being one of the most highly trafficked areas leads to more accidents and disappearances. The Bermuda Triangle claimed more than 1,000 lives during the 20th century, which is a similar number to other areas of high water traffic.

Hexagonal clouds: The image to the right shows a satellite view of hexagonal clouds over the western tip of the Bermuda Triangle. Some scientists believe powerful winds are located below these clouds, creating “air bombs.” These are blasts of air that would hit the ocean, creating waves of over 40 feet.

Electronic fog: A grayish cloud of electromagnetic fields forms above the ocean and can engulf a ship or plane. The fog then keeps moving with the vessel, causing the electronic systems and instruments to malfunction.

Paranormal: Some people attribute the disappearances to paranormal events such as alien abductions or UFOs. Others believe the area is a portal to other planets.

Lost city of Atlantis: Another theory is that Atlantis was located under the Triangle, and the crystals that powered the city create waves of energy that destroy the vessels above.

The Navy and Coast Guard suggest that the combined forces of nature and human error are the cause of the unexplained disappearances, stating that all areas of the ocean can be a dangerous place.

Hexagonal cloud formation over the Bahamas

A Douglas DC-3 disappeared over the Bermuda Triangle in 1948.