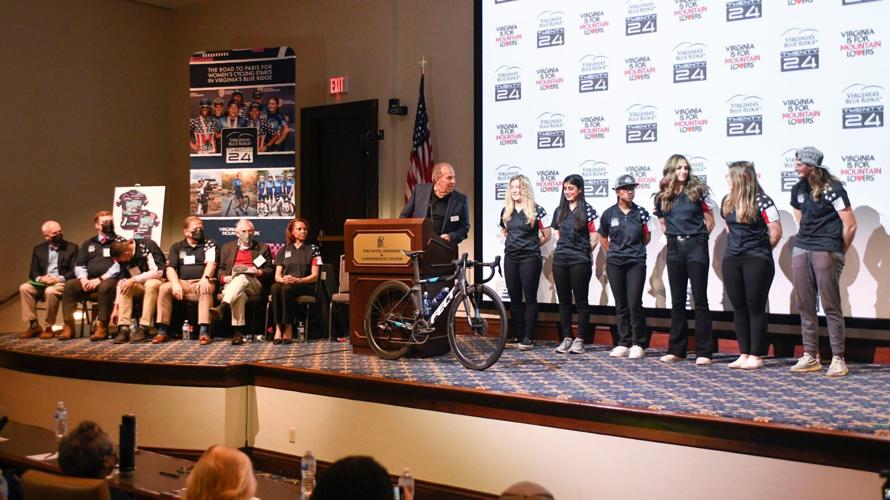 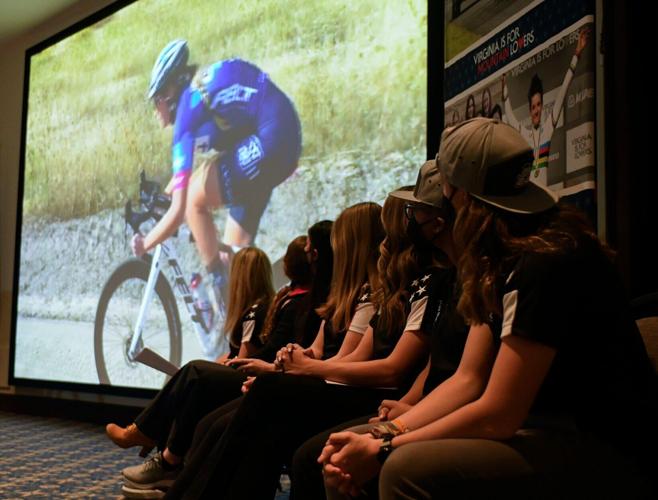 Members of the Virginia’s Blue Ridge Twenty24 professional cycling team watch a video during the Jan. 22 sponsorship announcement at the Hotel Roanoke. The region’s tourism agency will be sponsoring the team as it relocates to train in the Roanoke region. Many of the women cyclists will train here with the goal of making the 2024 Olympic cycling team. 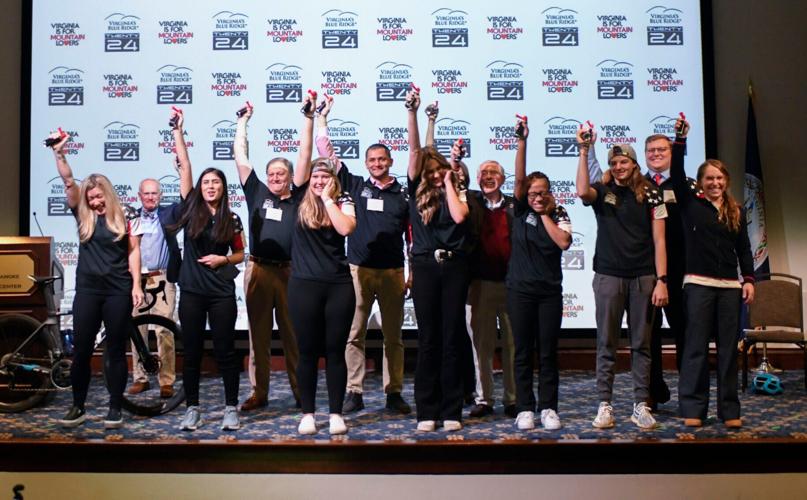 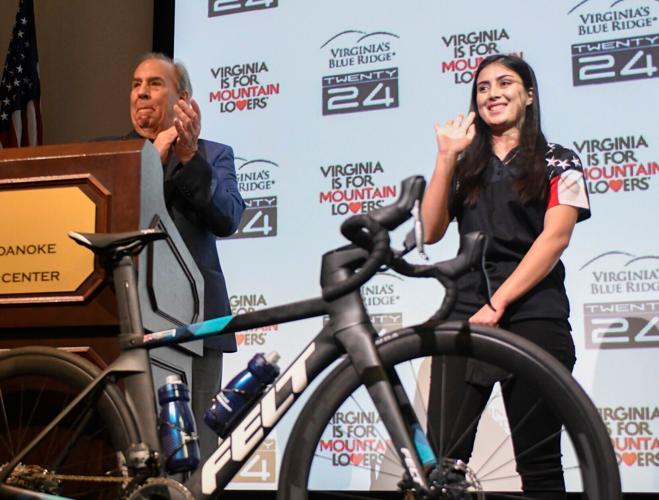 Virginia’s Blue Ridge board chairman Lee Wilhelm introduces Rukhsar Habibzai, the Afghan cyclist who was nominated for the Nobel Peace Prize in 2016. She and her Afghan teammates were recognized for fighting for their rights and setting a positive example against female oppression in her native country. She is now part of Virginia’s Blue Ridge Twenty24 cycling team based in Roanoke.

Olympians among female cyclists who will train in Roanoke Valley

A top U.S. women’s bike racing team with medal-winning Olympic athletes has chosen the Roanoke Valley as its hub of operations and training grounds for the next three years.

Virginia’s Blue Ridge, the Roanoke Valley’s convention and tourism bureau, contracted to be team’s title sponsor through 2024, resulting in the relocation of team operations to Roanoke.

“The terrain is amazing. It’s beautiful countryside. Lots of challenging rides,” said Nicola Cranmer, the founder and general manager of the team, which is being renamed Virginia’s Blue Ridge Twenty24.

The new partnership was announced Saturday in Roanoke.

While the team’s athletes will continue to live at their residences around the country, Cranmer is relocating to Roanoke from Boise, Idaho, the team’s former hub. Groups of athletes will periodically meet in Roanoke to train in preparation for races by riding area roads and trails. Area residents will have chances to engage, and perhaps ride, with the athletes, officials said.

The team, which espouses the empowerment of girls and young women, today consists of six pro athletes, five esports athletes and 27 junior athletes age 9 through 17. They race on paved roads, compete in mountain biking, ride in “gravel” contests that occur on dirt trails and engage in Zwift esports. In Zwift, a rider peddling a stationary bike animates an avatar on a virtual course depicted on a screen.

Some hope to get good enough to earn college scholarships, while others hope to compete in the 2024 Olympics to be held in Paris, thus the “24” in the team name. Earlier iterations of the team name have been built from the word “Twenty” and two digits for prior Olympics. The team name gives a nod to a title sponsor when it has one.

Cranmer, 55, was born and raised in England and described herself as a “horse-crazy teenager” when young. After moving to the United States in 1986, her passion became cycling. She has managed the team since she created it in 2005.

Now, the Roanoke area’s terrain reminds her of Salisbury in the county of Wiltshire where she grew up. The area’s relentlessly undulating hills and its rock and root-studded mountain biking trails were a significant factor in her decision to relocate the base of operations, Cranmer said.

Sponsorships are vital to teams. Cranmer said women’s cycling is only inching forward as a sport in part because it gets less media coverage than the men’s sport, which matters because where the media focus, sponsors tend to invest. But women’s cycling is chock full of stories worth media attention, she said.

Virginia’s Blue Ridge Twenty24, or VBR Twenty24 for short, is led by 19-year-old Jennifer Valente, who won gold and bronze medals at the last Olympics, held in 2021 in Tokyo. Those were the 2020 games, postponed a year because of the pandemic.

Another member is Rukhsar Habibzai, the former captain of the national women’s cycling team in Afghanistan. Cranmer had been in touch with Habibzai about supporting the Kabul-based team, but before that could happen Habibzai fled the Taliban in a mass evacuation and found her way to Virginia, where she lives.

“Cycling in Afghanistan is a taboo; women are verbally and physically harassed,” she told an event and news conference at the Hotel Roanoke and Conference Center. “I escaped with my life.”

Now she is living a second chance at achieving her dream, she said.

Top performers include past team member Shelley Olds, a 2003 graduate of Roanoke College and soccer star whom Cranmer credits with providing the cycling performance and inspiration to build the organization from a regional women’s road cycling team in Northern California into the powerhouse it is today. Members have since the team’s founding won 14 Olympic and Paralympic medals, 17 world championships and many national championships, a news release said.

State and local tourism agencies will contribute $1 million to the team in both money and marketing through 2024 in what was described as a dual tourism marketing and economic development strategy for this region. The team will adopt the Virginia’s Blue Ridge brand, displaying it on apparel as if they were rolling billboards, while the Roanoke tourism organization will market the cycling team.

Before the announcement and press event began, Howard blasted a handheld air horn — the kind that might be used to start a race — to quiet dozens of guests. Local state representatives and other VIPs shared the stage with athletes wearing dark blue team shirts.

Howard called the cycling team sponsorship an unparalleled opportunity for the region and his organization, formerly was called the Roanoke Valley Convention and Visitors Bureau before changing its name to Virginia’s Blue Ridge. It is funded by area governments and operated during the 2019-20 fiscal year on a $2.7 million budget, federal filings say.

According to Howard, an analysis predicted economic spinoffs will run into the tens of millions of dollars per year. The tourism bureau’s marketing campaigns have consistently emphasized the region as a great place to ride a bike. Signs at the hotel read, “Welcome to the Mountain Bike Capital of the East.”

The cycling team and the tourism agency, both nonprofits which were introduced to one another by Roanoke Times President Sam Worthington, signed their agreement in December, Howard said.

Worthington said he and Cranmer met years ago when they were both part of the same circle of friends and cycling community in Marin, California, where both lived. Worthington, a media executive in California, relocated to the Roanoke Valley for The Roanoke Times newspaper job last year and joined the cycling community here. He said he approached Cranmer in August, saying, “Why don’t you think about moving your team out here?” and later introduced her and VBR officials to one another.

Here’s the deal those talks spawned. The Virginia Tourism Corp., the state tourism agency, is the team’s platinum sponsor and will contribute $200,000 a year in money and marketing for two years. VBR becomes the title sponsor and will contribute cash and marketing services worth $200,000 a year for three years. Howard said VBR will probably exceed its $600,000 commitment.

Separately, Cardinal Bicycle in Roanoke will be the team’s retail partner in Roanoke, company owner Whit Ellerman said by email. “We look forward to working together to support the team and to further the growth of cycling for all riders in our region — and particularly for women and girls who can be inspired by the members of Team Twenty24,” he said.

There’s also something in the new partnership for area residents. It’s probably going to be possible for local cyclists to take a “social ride” with athletes, and the team might hold clinics open to local attendees, Cranmer said. She also said she has also contemplated placing a Zwift riding studio in VBR offices. Someday, she said, maybe the Roanoke area will build a cycling track.

The prospect for team-community engagement elated Lee Wilhelm, chair of the VBR board, who said: “There are a lot of children around here that need different things to do.”

Cranmer acknowledged already feeling strong community support and emphasized her desire to get to know the people of the region.

“We’re going to spend, especially in the first year, a lot of time in this community,” she said.

As her relocation plans come together, Cranmer has picked out an apartment and will be bringing six bikes, she said. The first training event is planned in late March.

One dream lost in Afghanistan, another unfolding in the Roanoke Valley

Rukhsar Habibzai fled Afghanistan in August, fearing for her life. Now she will continue her quest to pedal for equality as an aspiring Olympi…

A top U.S. women’s bike racing team with medal-winning Olympic athletes has chosen the Roanoke Valley as its hub of operations and training gr…

Members of the Virginia’s Blue Ridge Twenty24 professional cycling team watch a video during the Jan. 22 sponsorship announcement at the Hotel Roanoke. The region’s tourism agency will be sponsoring the team as it relocates to train in the Roanoke region. Many of the women cyclists will train here with the goal of making the 2024 Olympic cycling team.

Virginia’s Blue Ridge board chairman Lee Wilhelm introduces Rukhsar Habibzai, the Afghan cyclist who was nominated for the Nobel Peace Prize in 2016. She and her Afghan teammates were recognized for fighting for their rights and setting a positive example against female oppression in her native country. She is now part of Virginia’s Blue Ridge Twenty24 cycling team based in Roanoke.