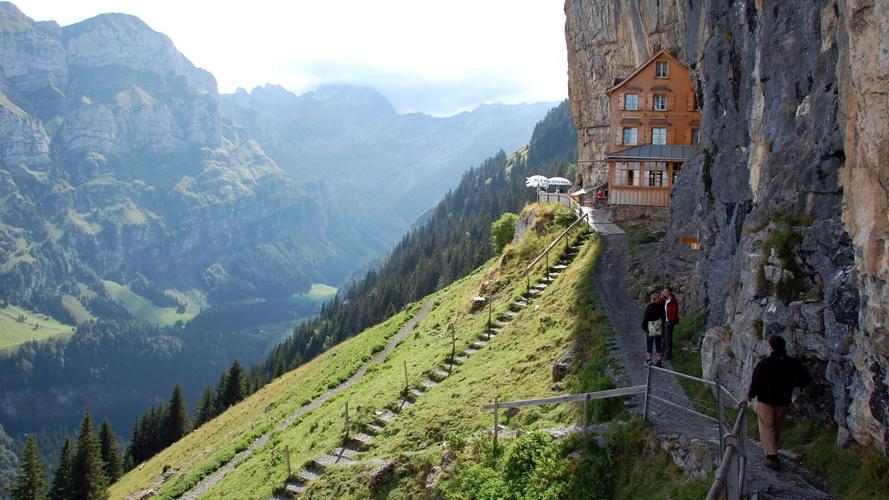 At Switzerland’ s Ebenalp, you can stay in this cliff-side guesthouse and enjoy stunning mountain scenery. 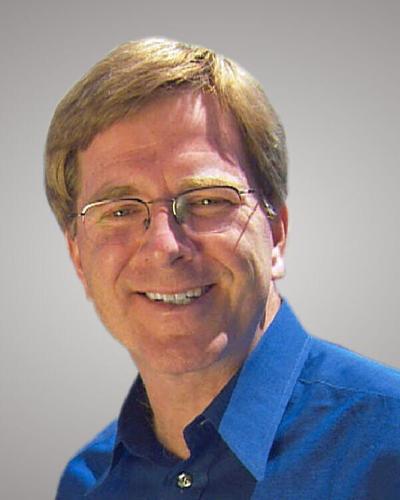 I’m high in the Swiss Alps in a tiny mountain hut on a perch called Ebenalp. Here, a spry grandpa in a sweater as worn as his face pulls a wide-eyed child onto his lap to teach him to drum with old wooden spoons, as the old-timer next to him pumps on his squeezebox. Tall, sloppy mugs of beer stoke the commotion. I’m immersed in the conviviality, but eventually climb upstairs to my lofty bunk.

Hours later, unable to sleep, I poke my head out of the tiny window and look wearily down on the raging party. Finally, the gang packs up their rucksacks and hikes out, disappearing over the ledge and into the moonlit forest. When their singing voices finally fade, it’s quiet and I sleep, marveling at how the Swiss make mountains fun.

I’m in Appenzell, a region with none of the famous mountains but a hearty dose of Alpine cow culture. Appenzell is Switzerland’s most traditional region — and long the butt of jokes because of it. They say you should set your watch back 10 years when you cross the cantonal border. Entire villages meet in town squares to vote. Until 1989, the women of Appenzell couldn’t vote on local issues. But the region has become more progressive. Locals brag that in 2000 its schools were the first in Switzerland to make English — rather than French — mandatory.

A gentle beauty blankets this region of green, rolling hills, watched over by the 8,200-foot Mount Santis. As you travel, you’ll enjoy an ever-changing parade of finely carved chalets, traditional villages, and cows moaning, “Milk me.” While farmers’ bikini-clad daughters make hay, old ladies with scythes walk the steep roads, looking as if they just pushed the Grim Reaper down the hill. When locals are asked about Appenzell cheese, they clench their fists as they answer, “It’s the best.” (It is, without a doubt, the smelliest.)

If you’re here in late August or early September, there’s a good chance you’ll get in on (or at least have your road blocked by) the ceremonial procession of flower-bedecked cows and whistling herders in formal, traditional costumes. The festive march down from the high pastures is a spontaneous move by the herding families, and when they finally do burst into town (a slow-motion Swiss Pamplona), locals young and old become children again, running joyously into the streets.

For me, Appenzell’s highlight is a quaint and rustic old hut built into a cliff at about 5,000 feet, just below a peak called Ebenalp. By chance it’s more accessible than it should be — just a short hike down from the top of the Wasserauen cable car (five miles south of Appenzell town).

From the summit where the lift leaves, you savor the 360-degree Alpine view and then head downhill. The trail leads through a prehistoric cave (slippery and dimly lit — hold the railing, and you’ll soon return to daylight) and the 400-year-old Wildkirchli cave church (hermit monks lived and worshiped here from 1658 to 1853), to Aescher-Gasthaus am Berg, a 160-year-old guesthouse built precariously into the cliff. Originally a hut housing farmers, goats, and cows, Aescher evolved into a guesthouse for pilgrims coming to the monks for spiritual guidance. Today, the hermit monks are long gone and it welcomes tourists communing with nature, offering cheap dorm beds and homemade cheese tart — made with Appenzeller cheese, of course.

From Ebenalp’s sunny cliffside perch, you can almost hear the cows munching on the far side of the valley. In the distance, nestled below Santis’ peak, is the isolated Seealpsee lake. Only the paragliders, like neon jellyfish, tag your world as 21st century.

Aescher-Gasthaus am Berg has only rainwater and no shower. Weekends often come with live music and rowdy parties going into the wee hours. The hut is literally built into the cliff; its back wall is the rock itself. From the toilet, you can study alpine geology and architecture. Sip your coffee on the deck, sheltered from drips by the gnarly overhang 100 feet above. The guestbook goes back to 1940, there’s a fun drawer filled with an alpine percussion section, and the piano in the comfortable dining/living room was brought in by helicopter.

Those hermit monks may be long gone, but I can’t think of a better place to commune with nature while immersed in traditional Swiss alpine culture than in a mountain hut high in Appenzell.

(Rick Steves (www.ricksteves.com) writes European guidebooks, hosts travel shows on public TV and radio, and organizes European tours. This column revisits some of Rick's favorite places over the past two decades. You can email Rick at rick@ricksteves.com and follow his blog on Facebook.)

As designers continue to push the envelope on over-the-top superyachts, several ships are bumping up the luxury offerings on older ships at a lower (but still high) price point.

A brief history of 10 famous casinos

Venice, Monaco, Singapore … pair alluring destinations like these with a casino, and unforgettable experiences are promised.

Why It’s Worth Booking Airbnbs for a Week or Longer

If you prefer vacation rentals like Airbnbs to hotels, then taking an extended stay can pay off — and not just because it’s more time on vacation and less time…

Taking the kids: When they are babies and toddlers

Go away with ... Kayden Muller-Janssen

The daughter of the Dutch national team’s dressage coach Sjef Janssen and dressage trainer Kerensa Muller, Kayden Muller-Janssen paved a different career path for herself. A former competitive baton twirler, the 20-year-old singer is best known these days for her acting career, which includes Disney’s “The Villains of Valley View.” Based out of Wellington, Florida, Muller-Janssen describes her character, Hartley, as “an interesting character. She’s charismatic and loves to help others and her community. She doesn't like to lie so that is a big challenge for her throughout the show. I think Hartley would be a great travel partner. She always has a positive outlook on life and knows how to have a good time.”

Over the last two weeks, two branches of government have staked out a position that when an airline cancels or substantially delays your flight, no matter what the reason, it should either get you to your destination as quickly as possible or give you a cash refund — and that a voucher or future credit isn't an adequate alternative. Unlike the case of minimized airline seat size, I think this idea will have legs.

Airline Prices Are Going Up, in More Ways Than One

Prices seem to be rising everywhere you look. From a dozen eggs to a gallon of gas, common products are more expensive now than they used to be. Even so,…

At Switzerland’ s Ebenalp, you can stay in this cliff-side guesthouse and enjoy stunning mountain scenery.