If you’re traveling with a pet for the first time (or maybe just the first time in a year), a lot has changed. Some airlines that used to happily ship your pet in cargo will transport them no more. Your emotional support animal likely can no longer fly for free. COVID-19 upended many facets of the travel industry, and flying with pets is no exception.

We analyzed the nine largest U.S. airlines on 11 different variables to find the most pet-friendly airlines. We combed through the fine print, fees and policies of all the major airlines to find which ones charge the lowest fees, are the most flexible in terms of what pets you can bring and how well they handle pet transport.

Here are the best airlines for traveling with pets.

We analyzed the nine major U.S. airlines based on factors including whether pets are even allowed, the average pet fee and airline safety records to determine what airline is best for pet travel.

Here are all of the airlines we reviewed and their overall ranking: 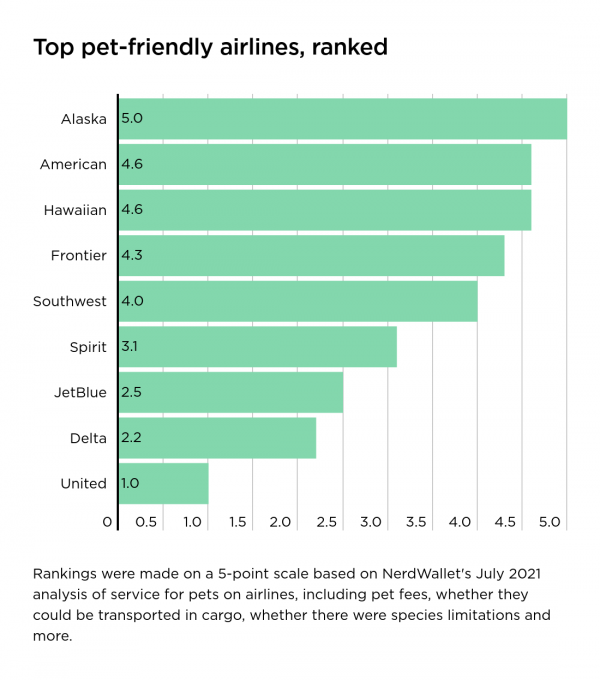 Alaska Airlines leads the pack to edge out Hawaiian and American Airlines, which tied for second place. Frontier and Southwest are solid options for your pets, with more pet-friendly policies than Spirit, JetBlue and Delta. United is the least pet-friendly airline according to our analysis.

The best airlines for flying with pets

Alaska Airlines is the best airline for traveling with a pet. It had among the lowest fees and the most flexible pet policy in terms of what types of pets you can bring.

Alaska has among the lowest pet fees for the main cabin, charging $100 each way per kennel or carrier. Since up to two pets of the same species and similar size may travel in the same carrier, that’s just $50 per pet if traveling with two.

You could fly with up to four pets. The Alaska pet policy lets you bring up to two pet carriers in the main cabin, but that gets pricey, as you’ll have to purchase the adjacent seat too.

While many airlines restrict main cabin pets to just cats and dogs, Alaska is more flexible, allowing rabbits and household birds, too.

Like most airlines, your pet carrier also counts toward your carry-on bag allotment, so plan to check bags — or pack light.

Alaska will transport not just dogs, cats, birds and rabbits in checked baggage or cargo, but also ferrets, guinea pigs, hamsters, non-poisonous reptiles, pot-bellied pigs and tropical fish. Fees to transport pets as Alaska pet cargo vary by route and your pet’s size and start at $250.

If you’re heading to an Alaska lounge, your pet can come too — as long as it’s well-behaved. The lounges, which are accessible to passengers with certain levels of elite status or people who purchase a separate membership, accept quiet service animals and pets in carry-on kennels. Some Alaska lounges are also accessible to Priority Pass members.

American Airlines charges $125 for main cabin flights for pets within North America, but we didn’t think the $25 difference was significant.

The American Airlines pet policy lets you bring one kennel that fits under the seat in front of you in lieu of a carry-on bag, and you must keep your pet in the kennel the entire time.

American passengers have the option to transport pets as checked baggage, which can be imperative for some pet owners, especially those with animals too large to fit in the main cabin. Fees start at $200 on American.

And if you’re heading to an Admirals Club lounge before your flight, your pet can come too, as long as it remains in its kennel.

Hawaiian accepts pets in the main cabin on almost all North American flights (no pets are allowed on New York-JFK, Boston, Orlando or Austin routes) as long as the carrier fits under the seat and it weighs less than 25 pounds with the pet inside. However, pets cannot fly first class on any North American flights on Hawaiian due to space limitations.

Keep in mind that flying to Hawaii with your pet is extra-complicated because the Hawaii Department of Agriculture requires a quarantine for all pets, which comes with its own separate costs starting at $185 per pet.

If your pet weighs more than the pet carry-on policy allows or you're flying in first class, your pet can travel in the belly of the plane. Fees start at $225 on Hawaiian for travel between Hawaii and North America.

Pets can also enter any Hawaiian Airlines lounge, as long as it remains in its carrier.

The challenges of flying with pets

Read the fine print before attempting to travel with pets on a plane.

Even with the most pet-friendly airlines, there are still many restrictions around a pet’s size and how free (or confined to the kennel) they can be when traveling within the main cabin. Some individual routes or aircraft have their own unique limitations beyond the standard airline pet policy. Plus, beyond fees, you’ll likely also incur a bunch of paperwork and phone calls before your pet can fly.

Here are a few road bumps to watch out for.

Reserve your pet’s spot before booking your seat

Even on the best airline for flying with pets, Alaska, it’s not a guarantee that your pet can fly. That’s because all airlines limit the overall number of pets allowed in the main cabin and cargo. For example, Alaska’s first-class cabin can only accommodate one pet carrier per flight, and the main cabin accommodates up to five.

You’ll generally need to contact the airline to reserve a space for your pet. Always call and confirm space is available before booking your own seat, as you don’t want to deal with the headache of canceling should there be no room for your pet.

Emotional support animals are no longer recognized as service animals

In past years, you may have traveled with your emotional support animal for free. That’s no longer the case. These days, all pets — regardless of their emotional supportiveness — are subject to pet policies and fees on all of the major airlines we reviewed.

Certified service animals are still permitted at no additional cost under the Air Carrier Access Act.

Fewer airlines will transport your pets in cargo or checked baggage

Of the major U.S. airlines, only Alaska, American and Hawaiian — our top three best airlines for traveling with pets — will transport pets in checked baggage and/or cargo.

Prior to the pandemic, both Delta Air Lines and United Airlines also offered pet cargo shipping but rolled back the service due to challenges like changing schedules and staffing shortages. Delta paused service on April 1, 2020, and an airline spokesperson told NerdWallet that the airline couldn’t provide more details on whether cargo pet services would return.

United suspended its pet cargo services on April 12, 2020, and also has yet to resume it.

Other major airlines, including Southwest Airlines and Spirit Airlines, never accepted pets in cargo — pandemic or not.

Other reasons airlines might not let your pet fly

Flying, even on our highly ranked airlines, can be annoyingly uncertain. Other reasons airlines may not let your pet fly include:

Your pet is a certain breed: Most airlines will not transport brachycephalic or "short-nosed" dogs and cats in cargo, though they might still be allowed in carry-on.

“Veterinary experts say that short-nosed animals commonly have abnormalities that can compromise their breathing,” according to Alaska. “Stress associated with flight can make those conditions worse.”

If you’re flying with one of those breeds, which includes pit bulls, Boston terriers and many types of bulldogs and pugs, check the airline’s specific policy.

You don’t have proper paperwork: Most airlines require a valid health certificate issued by your vet, certifying that your pet is fit to fly. Most airlines also require proper vaccines.

Your pet isn’t behaving: Most airlines will deny boarding to misbehaving pets. The definition of a poorly behaved pet can be subjective, but most airlines outline growling, excessive whining or barking, or urinating or defecating in the cabin or gate area as reasons.

Even if your pet is an angel at home, don’t assume it will behave the same way at an airport. Have a backup plan if there’s any chance your pet will be unpredictable on a plane.

If you’re considering flying with pets

Animal air travel is far from a walk in the park. Often, the fee to store your pet under the seat in front of you (while sacrificing your own precious legroom) is pricier than your own airfare. Before arriving at the airport, expect paperwork to sign and phone calls to make. Upon arrival, there’s a chance you’ll be denied boarding if the gate agent hears or sees any disruptive behavior.

If you must fly with a pet, but the restrictions feel burdensome, consider skipping the commercial aircraft entirely. Many private and semi-private jets allow pets to roam freely, won’t clamp down on breeds or sizes, and won’t make you wrestle your way through security with a pet in tow. While expensive, it’s not like flying on a commercial aircraft with a pet is cheap anyway.

When it comes to air travel with pets, you don’t exactly have your pick of the litter. Alaska was the best of the bunch, but even animal travel on Alaska has limitations. Know what you’re getting into before planning a flight with a pet. And accept that sometimes a road trip (or even a private jet) might be better.

The article The Best Airlines for Traveling With Your Pet originally appeared on NerdWallet.

Keeping your jack-o’-lantern fresh through Halloween

Drinking habits to avoid for a healthier heart

Drinking habits to avoid for a healthier heart

Times when it's best to use a debit card

Times when it's best to use a debit card

Stay dry with these waterfall photos from our Destinations Photo Contest

Check out these photos from people who did chase waterfalls.

Stretched over two chairs atop the skinny passenger deck of a 10-car ferry as it shuttles across Lago di Como, I look south into the haze of Italy. I’m savoring the best of my favorite country with none of the chaos and intensity that are generally part of the Italian experience. Looking north, into a crisp alpine breeze, I see snowcapped Alps.

Hit the road with these images from our Destinations Photo Contest

Some days you just need to hit the road.

Car rental agencies were caught out this year, as spring and summer travel sprang back suddenly in response to rising COVID-19 vaccination rates and caused a surge in demand that companies couldn’t meet, having sold off large portions of their fleets when the pandemic hit. This, of course, drove rental prices sky high, especially in destinations where travelers were flocking en masse, such as Hawaii.

As summer fades, check out these beach photos from our Destinations Photo Contest

Soak up the sun with these beach photos from our Destinations Photo Contest.