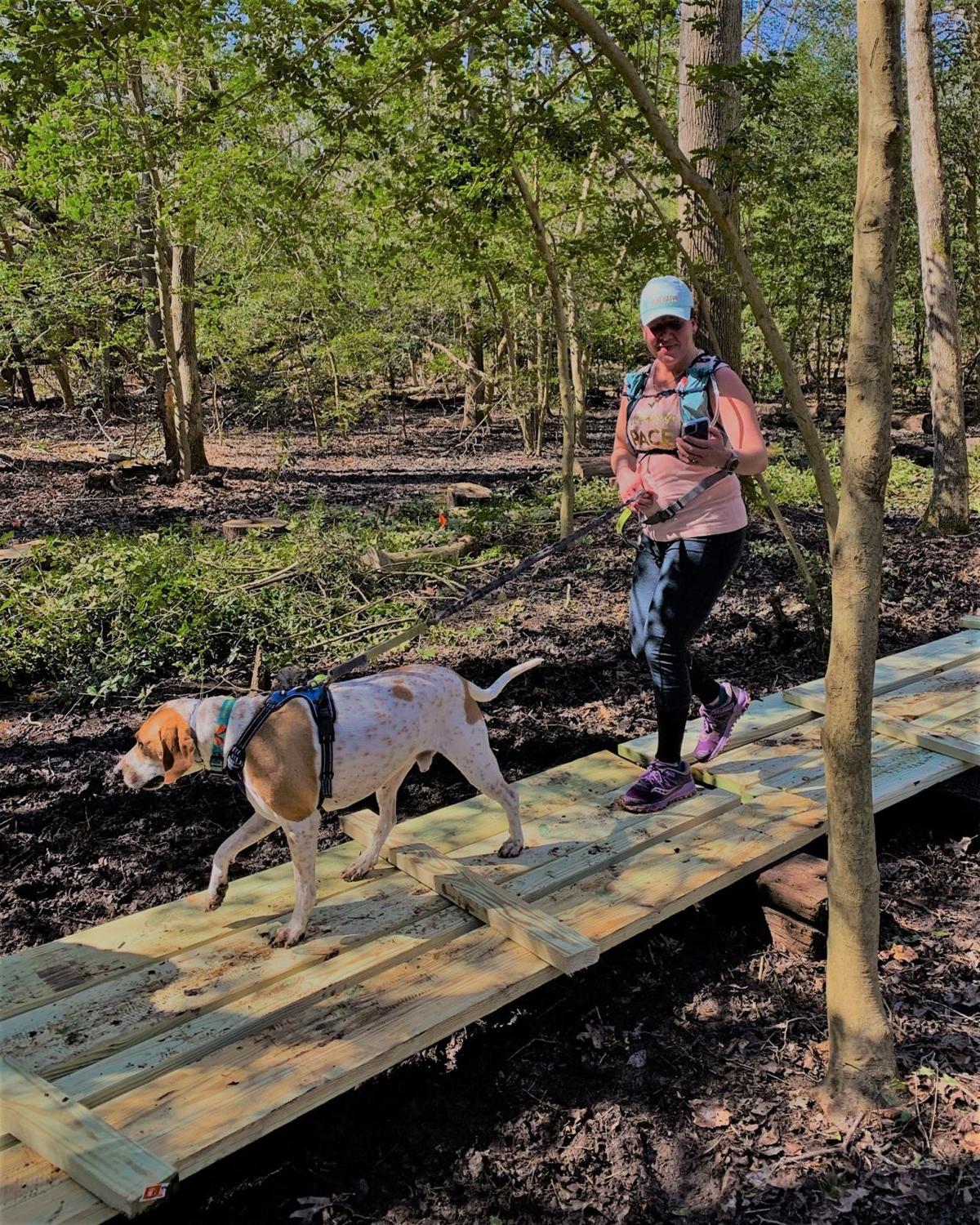 Gracie Pendelton and Holtby are the first to cross a new bridge on the Dahlgren trail. 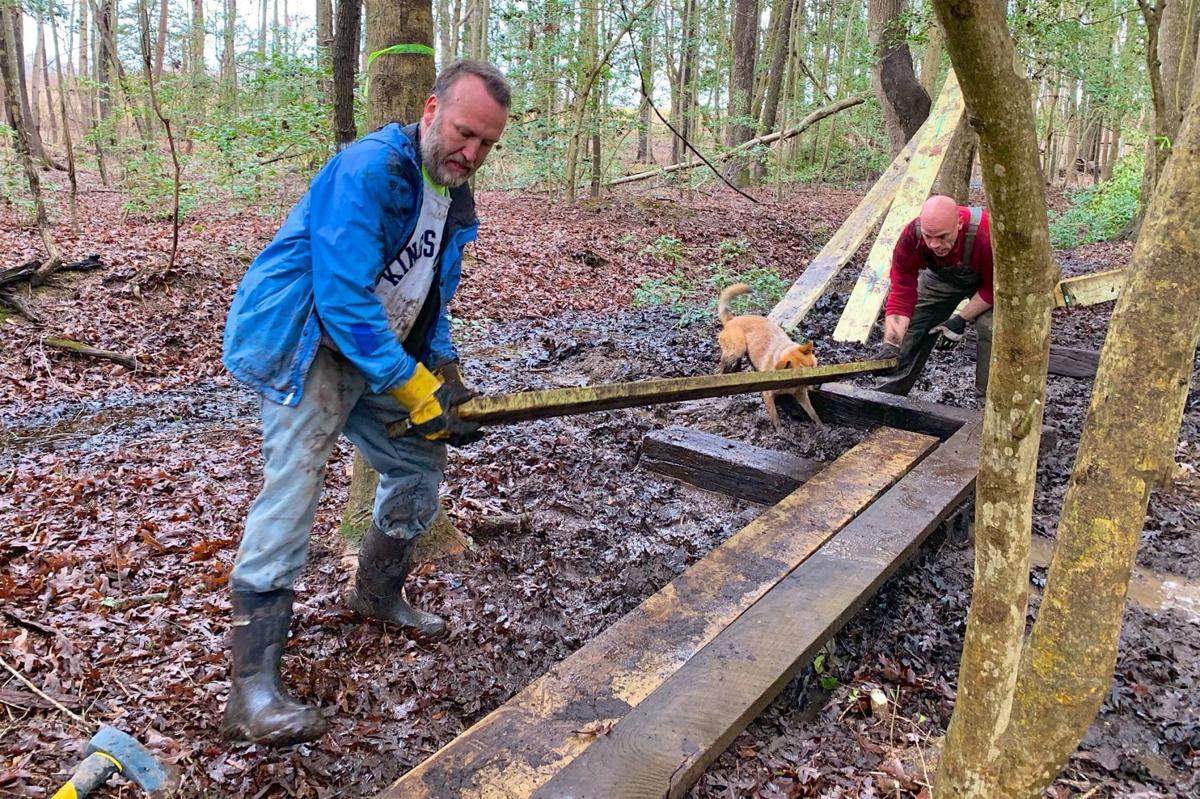 Dressed for the muck, Warren Veazey and David Gaske use planks of lumber to bridge muddy ground on the Dahlgren Railroad Heritage Trail. The “bog boards” will allow trail runners to race.

By CATHY DYSON The Free Lance-Star

KING GEORGE — When mud and muck stood in the way of walkers, runners and wheelchair athletes being able to enjoy a 14-mile trek through the woods of King George County, volunteers across the community rallied to build a bridge over troubled water.

Make that 120 feet of elevated bridges and boardwalks, known in trail terms as “bog boards,” that the Friends of the Dahlgren Railroad Heritage Trail put in place. Along with others who heard about the effort, the group rustled up old railroad ties from elsewhere on the path and put down new lumber in time for the Sheetz-to-Sheetz Trail Run held on Saturday.

It’s the fourth year for the event that’s more about enjoying the outdoors than keeping time or breaking personal records. The race sold out and has grown to about 225 participants.

The route spans 14 miles of the Dahlgren trail from the Sheetz at state Route 3 and state Route 206 to the one off U.S. 301 in Dahlgren.

Because recent rains had turned a segment of the trail into a mess of mud puddles, race organizer Chris Chalkley was worried how teams of wheelchair riders from the local chapter of Ainsley’s Angels would be able to participate.

“Trail users on bikes likewise faced a choice of turning around or sloshing through a swamp,” Chalkley said, who contacted the trail’s organization of helpers. “The end result is like an elevated highway above the swamp — wide and stable enough for runners, wheelchairs and bikes. Amazingly, they did this all in less than a month!”

Photos show volunteer Warren Veazey, in particular, in the thick of the quagmire. He loaded up pieces of railroad ties claimed from other parts of the trail onto his truck, then backed the vehicle into some of the muddiest spots.

He and fellow volunteer Kevin Biondi unloaded the ties onto a wheelbarrow then pulled them into the proper place. The ties gave the needed elevation, then volunteers covered them with planks of lumber.

The boards were paid for through a bequest by one of the group’s “longtime trail friends,” said Jim Lynch, trail president. “Many community folks came together to make this work.”

When two King George deputies happened upon the workers, they helped clear litter from the course, Chalkley said. Likewise, Annie Cupka, the county’s at-large representative on the Board of Supervisors, put on mud boots and work gloves and carried two-by-fours through the mire.

“All in all, it’s King George at its best,” Chalkley said.

The trail is in an old railroad bed, used after World War II to haul equipment from Washington to what’s now called Naval Support Facility Dahlgren. When the train line was put in, it cut through the cemetery of Little Ark Baptist Church, but DRHT members later detoured the trail around the tombstones to correct that “travesty,” said Kelsey Bracewell, who handles media relations for the group.

But once the trail left the elevated areas of the old railbed, it literally sunk to a new low that was prone to flooding. After February, which included almost every possible type of precipitation, Chalkley worried how the Ainsley’s Angels participants would slog through it.

The goal of the group is to move those with limited mobility from the sidelines into the middle of the action. Wheelchair riders often grin from ear to ear to be part of the fun run as their “angels,” clad in their signature pink shirts and headbands, push them along the trail.

In years past, others have asked to take a turn pushing the chairs, and Ainsley’s Angels ambassador Michele Tritt welcomed the chance to share the chapter’s goal of providing more inclusive opportunities.

She especially appreciated the way the trail group asked her to bring a racing chair out to the mud bogs to make sure the new ramps were wide enough.

“Accessibility is not always in the forefront of planning, but [this] speaks to the leadership and desires of this group to be ‘all inclusive’ and not leave anyone on the sidelines,” Tritt said.

Chalkey met with Lynch, Veazey and Biondi on the trail to see if volunteers could build the kind of simple pedestrian bog bridges he’d seen in Prince William Forest Park. The group met again to build a prototype using scrap lumber and salvaged railroad ties.

Plans became more ambitious from there, but it was already mid-February and “the weather gave us one rain, ice or snowstorm after another,” Chalkley recalled. “I became increasingly skeptical.”

But then Veazey started loading up railroad ties, and work parties came together on two Saturdays, Feb. 27 and March 6. Members of the community who heard about the project came out, along with some of Chalkley’s co-workers from the Navy base, where he’s a branch chief.

Local Scout groups came to help. Boys and girls from Troop 199 in Stafford County moved sticks and collected garbage while those from Boy Scout Troop 191 in King George picked up sweet gum balls, known to pop bicycle tires or get stuck in shoes. Boy Scout Troop 0110 from Ladysmith worked on some of the drainage problems at the Indiantown Road parking area.

In a little over a week, the ambitious project was finished, and Chalkley was “forever grateful for the hard work and dedication demonstrated by the Friends of the DRHT and volunteers.” He said it has benefited participants in Saturday’s race and will also benefit anyone else who wants to walk, run, hike or bike, push a stroller or wheelchair through the woods to observe some natural beauty.

Former Virginia Tech soccer player sues coach, claiming she was forced off team for refusing to kneel before games

The former James River standout alleges that, during halftime of the Sept. 12 season opener at UVA, “Coach Adair berated Hening for her stance."

This widow kept better records than the Virginia Parole Board. Her family thinks it stopped a killer from going free.

LYNCHBURG — When she’s doing anything, like driving around town or alone with her thoughts, Judy Smith thinks of the night she saw her husband die.

Watch Live: The jury delivers a verdict in the Derek Chauvin murder trial

The jury has reached a decision in the trial of Derek Chauvin over George Floyd's death. Watch live as the verdict is read.

“This student asked a series of questions that were quite antagonistic toward the panel. He pressed on and stated one faculty member was being contradictory. ..."

Gracie Pendelton and Holtby are the first to cross a new bridge on the Dahlgren trail.

Dressed for the muck, Warren Veazey and David Gaske use planks of lumber to bridge muddy ground on the Dahlgren Railroad Heritage Trail. The “bog boards” will allow trail runners to race.