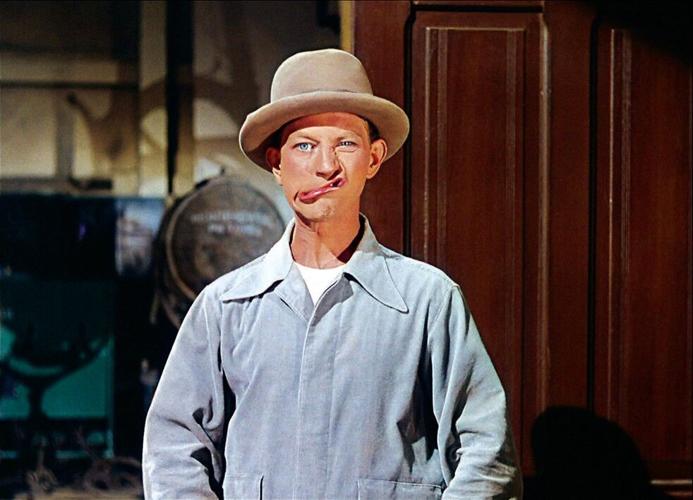 Donald O’Connor as Cosmo Brown in his performance of “Make ‘Em Laugh” in “Singin’ in the Rain.” MUST CREDIT: Warner Bros. Entertainment 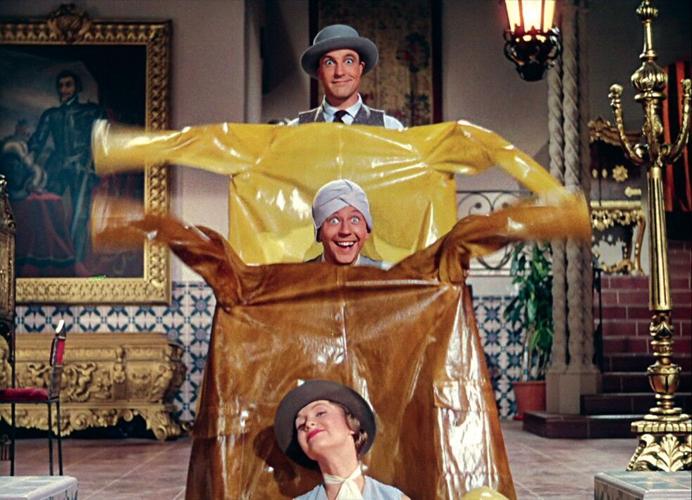 To mark the 70th anniversary of MGM’s “Singin’ in the Rain,” which starred Kelly (from top), Donald O’Connor and Debbie Reynolds, the film is getting a home media rerelease as a 4K Ultra HD disc. 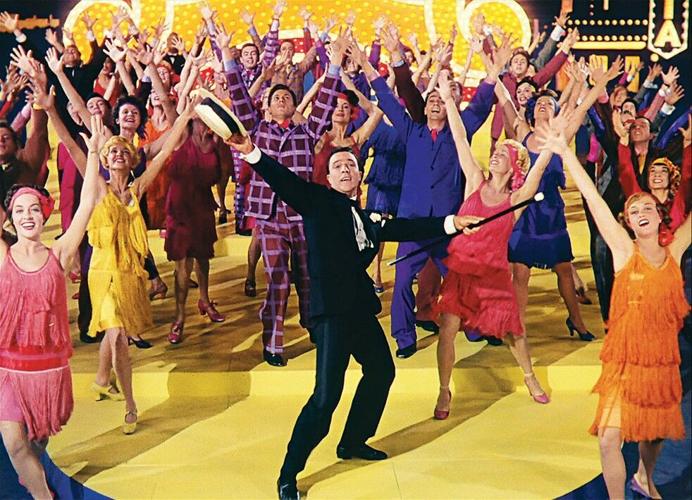 Gene Kelly wanted to bring joy with the musical “Singin’ in the Rain,” and it still delivers that 70 years later.

There are very few movies that stand as “proof of the system” — evidence the old Hollywood studio factories could not only create great commerce but also great art. “Casablanca” is the example everyone uses of a film that became a classic even though hardly anyone working on it knew what they were doing at the time. “Singin’ in the Rain” is its opposite. Everyone knew what they were doing on that movie, and they did it brilliantly.

The title sequence alone — Gene Kelly spinning and splashing, in love in a downpour — is instantly recognizable to people who haven’t even seen the film. Donald O’Connor’s “Make ‘Em Laugh” routine is as hilarious as the day it was shot. The “Moses Supposes” dance duet between Kelly and O’Connor is, in the words of Kelly’s co-director, Stanley Donen, “the best tap dance that has ever been done in pictures. Ever.” (He’s biased, but he’s not wrong.) Then there’s the climactic “dream ballet,” with Kelly’s rube singing “Gotta Dance” before being seduced by Cyd Charisse’s endless legs.

The 1952 Kelly-Donen musical — the pinnacle of the MGM musical unit run by a onetime songwriter named Arthur Freed — turns 70 this year, yet it’s timeless in a rare and wonderful way. Is that ironic given that the plot centers on a very specific upheaval in film history, the coming of talking pictures in the mid-1920s? Maybe so, but a century later, you could sit a 3-year-old down with “Singin’ in the Rain” — or, even more daunting, a 13-year-old — and they would be enraptured by the breeziness of the comedy and the ease of the dance. Kelly’s Pepsodent grin and O’Connor’s buffoonery, Debbie Reynolds calling out “Good morning!” and Jean Hagen’s paint-stripping voice. All of it. There’s not one bum note.

As is standard practice, the anniversary of “Singin’” is being observed with a fresh home media rerelease utilizing the latest technology, in this case a 4K Ultra HD disc that won’t play unless you have a 4K Ultra HD Blu-ray player (and won’t look its best unless you have a 4K Ultra HD TV). Upgrade as you will, but know that there are 50th and 60th anniversary editions of the movie still available that, like this one, include the commentary track featuring many of the principals who are no longer with us. Kelly died in 1996, O’Connor in 2003, Reynolds in 2016, and Donen made it to 94 before passing away in 2019. Who’s left to tell the stories of how this miracle got made?

Well, Patricia Ward Kelly is, even if she wasn’t present at the creation — even if she wasn’t even born when “Singin’ in the Rain” was made. Ward Kelly is a historian who met Kelly, 47 years her senior, while working on a documentary for the National Air and Space Museum in 1985. She married the actor in 1990 and is now president of the Gene Kelly Image Trust, dedicated to keeping the star’s movies and legacy alive. Having heard and recorded the details of “Singin’” and other films from her late husband and researched the rest, she is a walking encyclopedia of MGM musical minutiae and quick to correct the myths surrounding the film.

Such as? “The one that just persists, that I cannot kill, is that there’s milk in the water [during the famous title dance number] so that you see the raindrops,” Ward Kelly says in a Zoom call from Los Angeles, where she lives. “That is just not true. You laugh, but people print it all the time. It’s just terrific backlighting of the rain, a really remarkable [use of] lighting and cinematography.”

She’s also eager to respond to the tales Reynolds told in later years about the making of “Singin’ in the Rain,” including that her co-star hadn’t wanted this untested 18-year-old in the film at all. Says Ward Kelly, “Gene thought she was the perfect ingenue. Stanley said, ‘Yeah, but can she dance?’ And Gene said, ‘It doesn’t matter if she can dance,’ because he knew how to choreograph her to make her look her best.

“If you watch closely,” Ward Kelly says, “[Reynolds’] steps are not identical to Donald and Gene’s, but she looks fabulous. And he positioned his assistant Jeannie Coyne next to her. Another assistant is next to her in another sequence. So, he was smart. He protected the players. He wanted them to look good.”

The mention of Coyne — who later became the second Mrs. Kelly after the star’s divorce from actress Betsy Blair in 1957 — is telling. While the roster of great MGM musicals includes “Meet Me in St. Louis” (1944), “On the Town” (1949) and “The Band Wagon” (1953), “Singin’ in the Rain” represented the Freed unit functioning at the peak of its powers, with integral contributions up and down the credits. The sassy, sophisticated script by Betty Comden and Adolph Green complemented the songs, most of them oft-used chestnuts written in the 1920s and 1930s by Freed with his songwriting partner, Nacio Herb Brown. (The notable exception was “Make ’Em Laugh,” written for the film and universally acknowledged as pilfered wholesale from Cole Porter’s “Be a Clown,” from the 1948 film “The Pirate” — Porter chose to be a gentleman and look the other way.) Ward Kelly mentions music mixer Bill Saracino, “who was a genius, [adding] a kind of squish” to give the tap dancing in the title sequence the right watery sound. There was Roger Edens, composer, arranger, producer and jack of all MGM musical trades; there should be a documentary about him.

And there was the dance team around the star — Coyne and Carol Haney, among others — and Kelly’s unique working relationship with his co-director, a binary-brained unit that allowed the performer to perform while Donen made sure the camera and Kelly hit their marks.

The rabbit hole of trivia around this movie goes delightfully deep. Yes, Kelly filmed the title sequence while recovering from a high fever and a sinus infection. The bit in “Make ‘Em Laugh” where O’Connor lies on the floor and runs in circles? He borrowed it from Curly Howard of the Three Stooges after asking the ailing comedian for permission; Howard died six months later. In the recording booth scene where Reynolds’ Kathy is dubbing the voice of Hagen’s screechy Lina Lamont, singer Betty Noyes is actually dubbing Reynolds, and for the spoken lines, that’s Hagen using her real voice to dub Reynolds dubbing Hagen. (You untangle that sentence; I have to go lie down.)

Or just watch the movie, again or for the first time. “Singin’ in the Rain” received middling reviews on its release in 1952, and it was overshadowed in theaters by a rerelease of Kelly’s “An American in Paris,” which had just won the Oscar for best picture. But “Singin’” has lasted — more than lasted, it has ascended. It regularly lands in the all-time top 10 of movie lists, but why?

Says Patricia Ward Kelly, “To quote the great Rita Moreno, who plays Zelda in the movie, ‘It’s a perfect musical.’ And I think it really is. Everybody’s working at the height of their ability. ... There’s not a weak link in it.”

She continues: “Gene said, ‘I wanted to bring joy with this film.’ That’s all. And I think now, after we’re maybe coming out of a disastrous period and we’re in another disastrous period, the simplicity of that intent is so valuable. Even though people don’t recognize that was Gene’s intent, they feel it, and they feel it intrinsically. For people of every age, joy is a pretty universal language.”

Scientists have calculated how many ants are on Earth. The number is so big it's 'unimaginable.'

Pasta alla vodka and risotto are two of my all-time favorite dishes (risotto is arguably my favorite breakfast, don’t ask!), so I’m shocked it…

Servers in pigtails earn more tips. It's creeping them out.

Before her third consecutive double shift at a pizzeria last year, Grace Velez pulled her hair, which fell past her waist, into pigtails. Vele…

How to cook with barley, farro, wheat berries and more whole grains

Flour is the most common way we cook with grains. But there are so many types of grains and cooking techniques to explore, especially in savor…

The fall migration is underway. Every year, billions of birds representing roughly 500 species fly southward to warmer climes along the Atlant…

Eastern Canada braces for Fiona to be 'a storm everybody remembers'

Authorities in eastern Canada warned residents to be ready Friday for a “historic,” potentially record-setting storm as Hurricane Fiona approa…

A new Donald Trump-backed super PAC was formed on Friday, as the former president seeks to exert more influence in November’s midterm contests…

In schools across the country a troubling scenario is playing out: a call comes in about a shooting at the school. Someone has a gun. Police r…

We’ve all been there: You just sent a message to someone you wish you hadn’t.

Donald O’Connor as Cosmo Brown in his performance of “Make ‘Em Laugh” in “Singin’ in the Rain.” MUST CREDIT: Warner Bros. Entertainment

To mark the 70th anniversary of MGM’s “Singin’ in the Rain,” which starred Kelly (from top), Donald O’Connor and Debbie Reynolds, the film is getting a home media rerelease as a 4K Ultra HD disc.

Gene Kelly wanted to bring joy with the musical “Singin’ in the Rain,” and it still delivers that 70 years later.