It's the season premiere of Snow Search! Meteorologist Sean Sublette from the Richmond Times Dispatch and Meteorologist Joe Martucci from The Press of Atlantic City take you beyond the seven day forecast to show you what cold air outbreaks or snow may be coming over between Nov. 25 and Dec. …

After a dramatic shift from warm to cold this month, temperatures will be closer to normal for the next several days.

Like flicking a switch, the next 10 days were all colder than normal, with an average temperature of 7.5 degrees below normal. Through the morning of Nov. 17, Richmond had not had a night in the 20s. But the next five consecutive nights were all in the 20s; the streak ended Wednesday with a daybreak temperature of 30 degrees.

Milder nights are also ahead for the next few days, likely in the 40s from Thanksgiving night through the first of next week. A couple of storm systems will pass through over the next four days, but metro Richmond will be on the relatively warm side of the storms as they go by, keeping away any threat of snow or ice.

Temperatures will edge into the 60s during Thanksgiving afternoon, and while one data point does not make a trend, it does fit with the recent observations of the warming climate.

Thanksgiving was moved to the fourth Thursday in November in 1942, so to get an idea of how that time of the month has changed, we looked at the average temperature during the week of Nov. 22-28.

With temperatures nearer to normal for the next week or so, a November snow is out of the question. And while there is no obvious sign of snow ahead in December yet, there are some hints that the atmosphere will be more conducive for snow in Virginia later in the month.

After the first weekend of December, many of the computer simulations suggest several days that are colder than normal with a more active storm track. This is not reflective of one particular simulation, but a group of simulations called an ensemble.

The ensemble forecasts suggest a shift in steering winds across Greenland and the North Atlantic Ocean, a relationship known as the North Atlantic Oscillation. In the negative phase of this pattern, there is warm air and high pressure at the jet stream level over Greenland, effectively blocking the normal west-to-east movement of storms across eastern North America, and allowing repeated blasts of Arctic air into the eastern United States.

The last time the NAO was substantially negative was just after the middle of October, when Richmond had five consecutive nights of temperatures 40 degrees or below.

So while that signal is still more than 10 days away, keep that in the back of your mind for the first full week of December.

Until then, enjoy the milder nights.

What the 2022 climate change conference means for Virginia

It's the season premiere of Snow Search! Meteorologist Sean Sublette from the Richmond Times Dispatch and Meteorologist Joe Martucci from The … 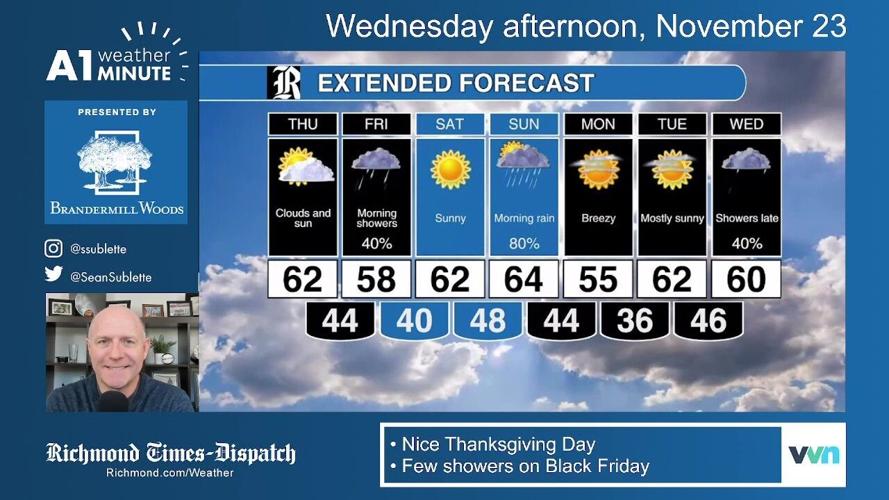 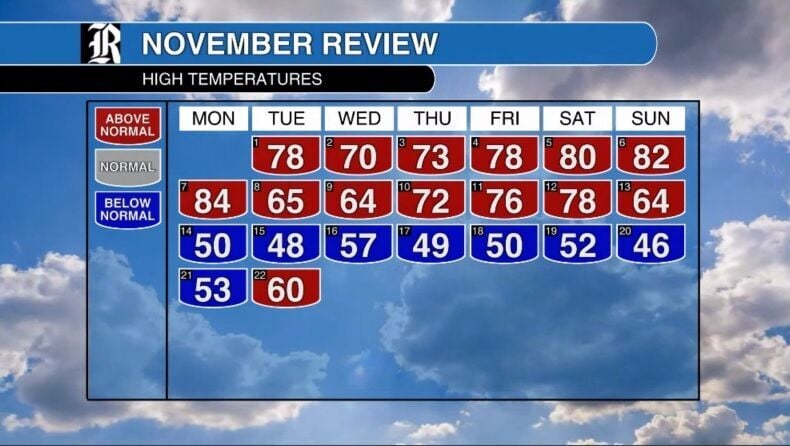 Much above normal earlier in the month before a dramatic switch for the third week.