Periods of rain Wednesday will be limited to the morning across metro Richmond before clouds give way to sunshine for the afternoon. Rain will generally be light, adding up to less than a quarter-inch before ending by midday.

After a dry and seasonable period through Thursday and Friday, Saturday will turn warmer again. The southwest breezes Saturday will bring a small scattering of showers across central Virginia but no steady rain.

A quick passing shower or two may squeak through during the Richmond Christmas Parade on Saturday, and it will not be especially cold Saturday morning as the parade gets started. Temperatures around 10 a.m. will be climbing into the upper 40s and finishing the afternoon in the lower 60s.

It’ll be cooler and sunny Sunday, then a couple of chances of rain return for the start of next week.

In the longer range, there are signs of another storm moving in next weekend (Dec 10). Early signs suggest just rain, but some colder air will be only a few hundred miles away, and a lot can happen in the forecast between now and then. If you are looking for a prolonged period of colder weather, there are hints of a more significant shift to temperatures more regularly below normal starting around Dec. 14. Hurricane season ends Wednesday and, like winter outlooks, the preseason hurricane outlooks get a lot of attention. Both 2020 and 2021 were exceptionally busy and, in most weather circles, 2022 was also expected to be busy — just not to the extent of the previous couple of years.

In general, the season was forecast to skew above normal. Different outlets had different specific figures in their outlooks, but the same theme was present.

The people on the forecast team at Colorado State University were pioneers of hurricane seasonal forecasts. Historically, they have shown skill using a combination of wind patterns and ocean temperatures across different parts of the world to correlate to hurricane activity in the Atlantic. The ocean water temperatures and atmospheric pressure in the North Atlantic and along the equator in the Pacific are both key data values.

Their forecast issued at the start of the hurricane season was for 20 named storms, 10 of which were to become hurricanes. The normal values are 14.4 and 7.2, respectively.

But by most metrics, the season was near or less active than normal. There were 14 named storms, and eight managed to strengthen into hurricanes.

To the surprise of most meteorologists, there were no storms in August, the first time since 1997 there was no storm during that month. The CSU team suggests the high wind shear in the atmosphere during August was responsible, which is difficult to forecast a few months in advance.

Wind shear, or the changing of wind direction and speed with altitude, inhibits the concentration of the thunderstorms near a center of circulation, which is needed to get a tropical system to take shape and strengthen.

That quiet August was the biggest contributor to the missed forecast, as September did turn busy, with Fiona and Ian becoming major hurricanes before Nicole closed out the season earlier in November.

This was the first time since 2014 that the CSU team over-forecast the number of named storms, and while there is always more to be learned, their forecast has shown improvement over the years.

The team will issue their first outlook for the 2023 hurricane season April 13. 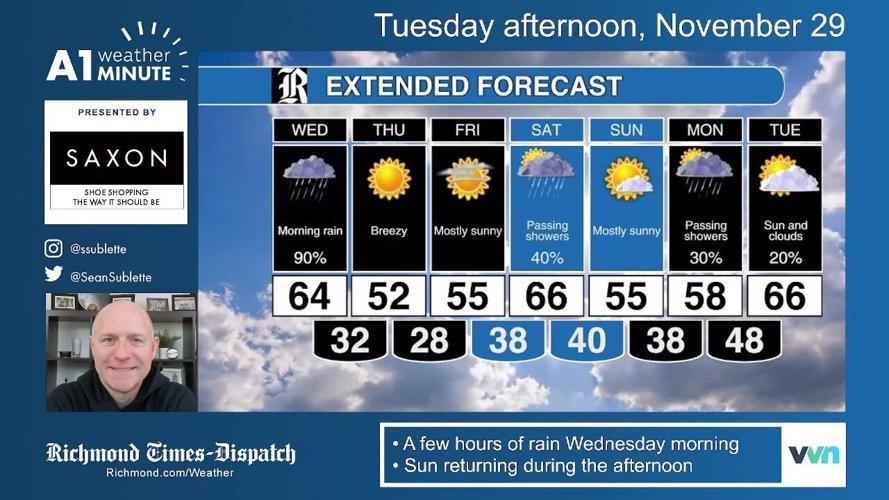 Rain on Wednesday will be limited to the morning 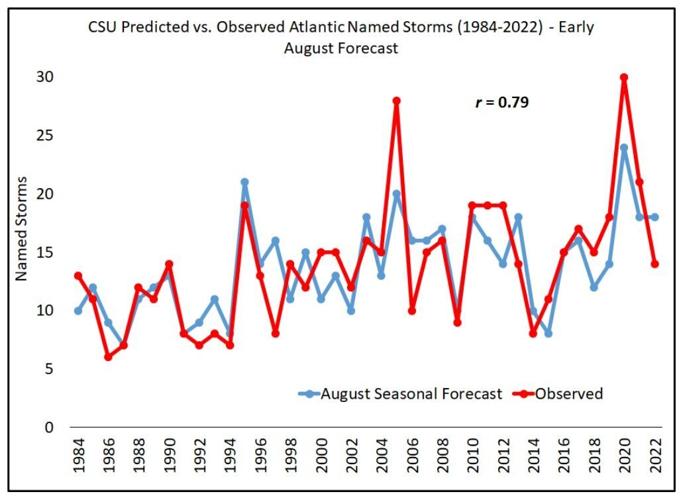 Number of hurricanes and tropical storms forecast in early August (blue) compared to the total observed (red) from the Colorado State Tropical Meteorology Project since 1984. (CSU)