Vinson Parnell of Jackson, Miss., played with the newly fallen snow on his brother’s car on Monday. An overnight storm brought snow and ice to cental Mississippi, which is among the areas with more winty weather than the Richmond region. 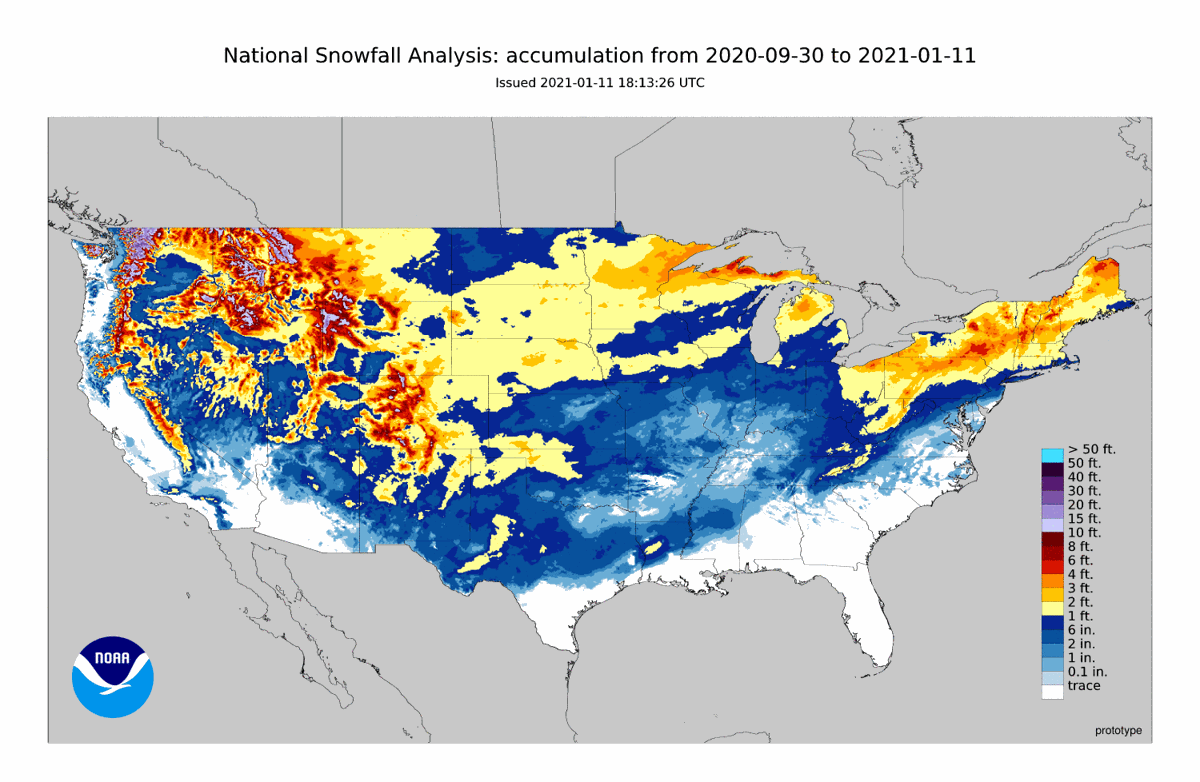 Season-to-date snowfall as of the morning of Jan. 11.

The grinning snowman outside of the National Weather Service office in Jackson, Miss. on Monday underscored that central Virginia is now trailing some surprising places when it comes to snow totals this winter.

We had a snowfall total of 1.2” here at our office. Just enough to build a snowman ☃️❄️ pic.twitter.com/eF9rZJ8ivk

That winter storm delivered a legitimate layer of snow deep into the heart of Texas and Louisiana, too – more than 4 inches in spots like Waco that can go decades without seeing that much.

Like Friday’s snow across North Carolina and southwest Virginia, the system was too suppressed to threaten the Richmond area with much more than clouds. In a different atmospheric state, one that last week's computer models entertained for a time, that Deep South system might have curved up the Eastern Seaboard, tapped into some cold air, and delivered snow to us as well.

But it didn’t. And now, as we approach the climatological halfway-point of winter, there isn’t another contender for a Richmond-area snowstorm on the immediate horizon.

Here's a selection of places that should be less-snowy than Richmond, but have seen more so far this winter:

Finally, this is the mostly-dry week that many of us have been waiting for. The next cold front will sweep the state from west to east on Friday and Friday night. It will deliver a noticeable cooldown for the weekend – daytime 40s and nighttime 20s instead of 50s and 30s – but go relatively light on rainfall. There's a chance that lingering moisture could eke out flurries or stray snow showers east of the Blue Ridge on Saturday, while the mountains see fresh accumulations. Skiers will be pleased, but it's not a scenario for a winter storm in central Virginia.

The cold air mass that arrives this weekend could still be milling around well into next week, but it's no guarantee of snow. At least not yet. A ridge that's expected to build over the northeast Pacific and western North America might direct a reinforcing shot of Canadian chill our way next week while another high over the North Atlantic tries to keep it trapped near the eastern U.S. for a time. But there's a range of possibilities for the duration and degree of cold. Any disturbance swinging through the southern Great Plains and Southeast will bear watching.

Vinson Parnell of Jackson, Miss., played with the newly fallen snow on his brother’s car on Monday. An overnight storm brought snow and ice to cental Mississippi, which is among the areas with more winty weather than the Richmond region.

Season-to-date snowfall as of the morning of Jan. 11.