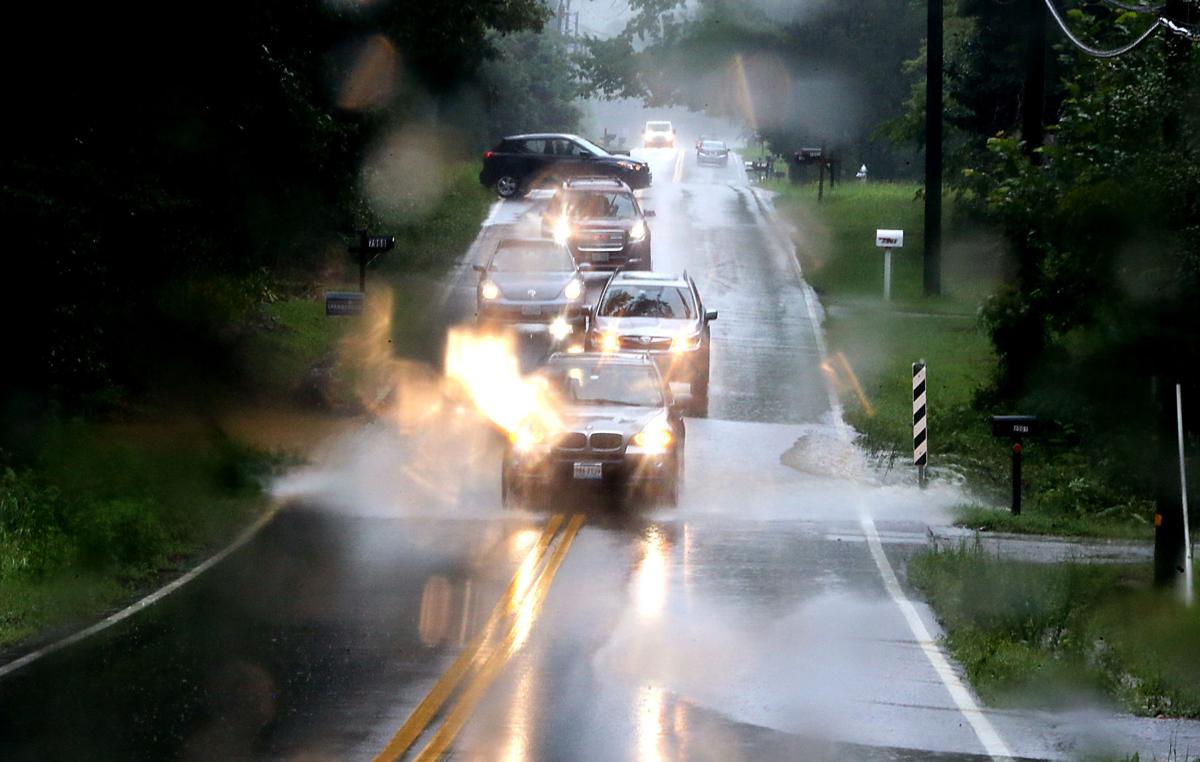 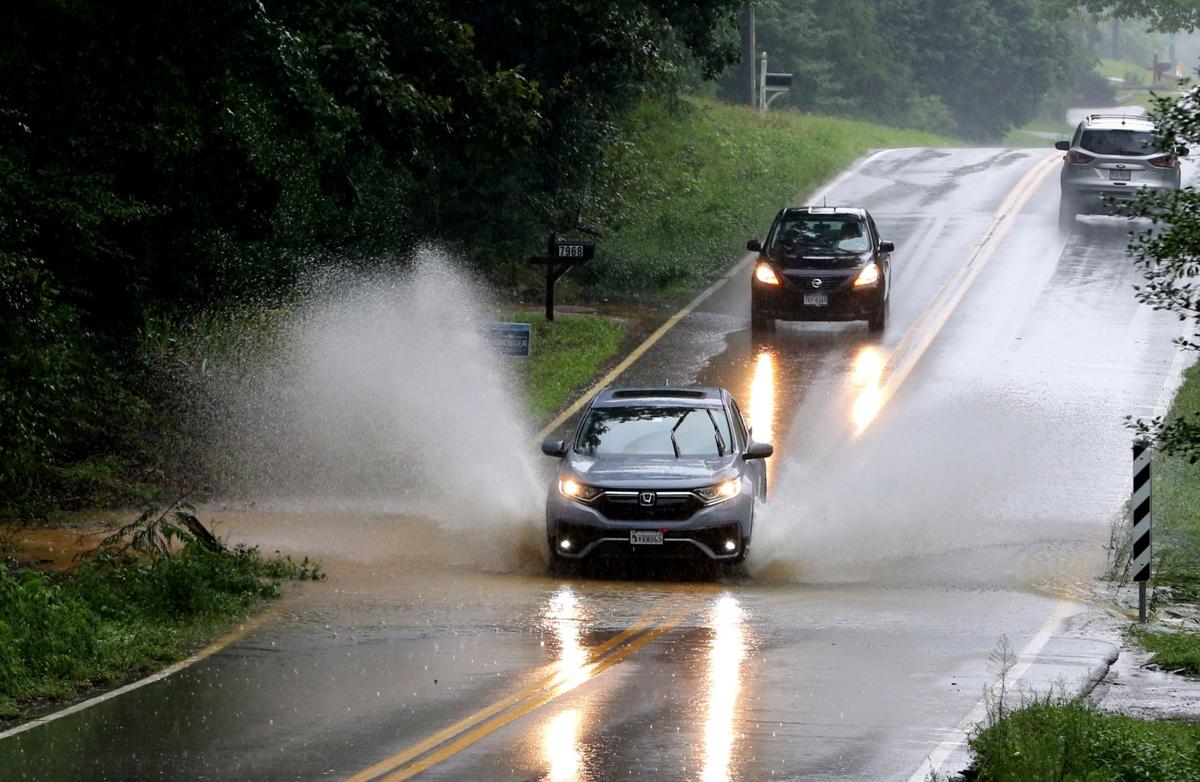 Soaking rain is filling back in across central Virginia this evening, adding to today's already-excessive totals.

The flood warning in place for much of metro Richmond (details below) has been extended until 8 a.m. A flash flood watch for the rest of central and eastern Virginia is also in effect until that time.

The rain chance will remain high through daybreak, then taper as Sunday morning goes on. Read on for a more detailed look at the forecast.

New overnight amounts could be as high as 4 or 5 inches in isolated spots, though models show that those highest totals could be more of a possibility just north or northeast of metro Richmond or across the peninsulas.

Even lower additional amounts of 1 to 2 inches would still be unwelcome for areas like Chesterfield County and the Tri-Cities region, where roads are still closed by high water from earlier downpours.

Use extreme caution if you have to drive throughout the region tonight, as flooded or damaged roads could be especially difficult to see in time.

For the latest warnings and advisories: National Weather Service in Wakefield

Rainfall has backed off considerably across central Virginia, with just clouds and scattered light showers in metro Richmond.

But this lull probably won't last the entire night.

The steadier rain has shifted eastward to Hampton Roads for now, while another batch of widespread rain stretches across the western part of the state.

Surry County is dealing with "considerable" flash flooding according to the National Weather Service in Wakefield. High water has closed Route 10 along with about a dozen other roads in that area.

More soaking rain is likely to break out across central Virginia later this evening into the early morning hours as low pressure moves along a stationary front near the Virginia-North Carolina border.

The flood warning covering most of the Richmond metro area has been extended to 1 a.m. due to the ongoing areas of high water from the earlier downpours. The flash flood watch continues until 8 a.m. Sunday because any additional rain tonight could create new trouble spots.

This wet weather pattern will slowly head offshore on Sunday. Any widespread rain affecting central Virginia overnight could taper shortly after daybreak, followed by hit-or-miss activity later in the day. The steadier rain may last into Sunday afternoon for Tidewater. Otherwise look for more clouds than sun which could keep Richmond's temperatures down in the 70s for a second straight day. Though Monday may not be entirely free of a rain chance, it looks to be much drier than what we've had recently and highs will return to the seasonable 80s.

The flash flood watch for metro Richmond has been extended to 8 a.m. Sunday, and also expanded northeastward to include the peninsulas. More rain is likely across central, southern and eastern Virginia overnight due to this stalled weather pattern. New or worsening flash flooding could develop due to the already-saturated ground.

So far, the heaviest rains and majority of reported road closures have been south of the James River. Parts of Chesterfield County between Midlothian and Pocahontas State Park have seen about 10 inches of rain in the past 24 hours. That's based on both gauge reports and radar estimates.

Chesterfield County declared a local state of emergency this afternoon due to the many roads made impassable by high water.

Several lanes of the Powhite Parkway are covered by water between Forest Hill Avenue and Chippenham Parkway and causing delays in both directions, according to VDOT.

A few parts of metro Richmond have seen the rain back off after a remarkably wet morning, while other towns have seen it get even heavier.

But we might not see all of central Virginia dry out until late Sunday morning. For some creeks and roads, things could get worse before they get better.

Stay alert for flash flooding across the region for the rest of the afternoon and into the night.

Check VDOT's 511 page for the latest closures in your area, but use caution on all metro area and Tri-Cities roads and turn around if you encounter high water.

As of 1:45 p.m., the heaviest rain in our region is falling between Prince George and Surry, and that activity is slowly moving east.

A nearly stationary area of steady rain is sitting atop Richmond and northern Chesterfield County, including some areas south of Midlothian that have seen nearly 10 inches of rain since late Friday. The rain across the rest of central and southern Chesterfield County is lighter than it was this morning, but flooding danger continues.

As the morning's flash flood warnings expire, they have been replaced with a new, larger flood warning valid until 7 p.m. for much of the metro area.

The following areas could see ongoing – or new – issues with flooded roads and creeks:

Northwestern Chesterfield County is now until a flash flood warning until 2 p.m. The areas between Brandermill, Midlothian and Bon Air have now seen 4 to 9 inches of rain and life-threatening flash flooding.

A new flash flood warning runs until 1:30 p.m. for Chester and the Pocahontas State Park vicinity of Chesterfield County. That area just saw 2 to 3 inches of rain in one hour, and 3 to 5 inches total.

Another flash flood warning is in effect until 2 p.m. for Hopewell, much of Prince George County and southwestern Charles City County.

As of 11 a.m., the heaviest rain was falling across those warned areas extending southeastward from Chester to Hopewell, Prince George and Petersburg. Moderate rain continues across the rest of metro Richmond.

As of 10:51 p.m., Hull Street Road is closed due to flooding at Bailey Bridge Road, according to VDOT. Chesterfield police are telling drivers to avoid the area.

A new flash flood warning is in effect until noon for Petersburg, Colonial Heights and nearby sections of eastern Chesterfield County and northern Dinwiddie County.

The heaviest rain in all of central Virginia is now falling between Chester and Petersburg, and moving very slowly to the east across Interstate 95.

Up to 1.5 inches of rain have fallen so far in the warned area, and another 3 inches could fall in the next couple of hours according to the National Weather Service in Wakefield.

This is what’s going on around @ChesterfieldVa so you don’t need to go out. Otterdale, Cloverleaf Lake, Genito, just to name a few. pic.twitter.com/icnipHSijv

The flood warning urges drivers to "turn around, don't drown," and notes that most flood deaths occur in vehicles.

At 10:06 a.m., NWS Wakefield relayed a report of numerous areas of swift water across roads in western Chesterfield from a county official.

Numerous roads through Chesterfield County are blocked by high water as last night's heavy rain continues into this morning.

Flash flood warnings are in effect until 11 a.m. for most western and southern sections of the county.

Chesterfield police asked residents not to drive through high water, saying via social media posts they were "extremely busy" with calls of vehicles in flooded roads.

One water rescue was reported at 1501 Otterdale Road, between Route 288 and Old Hundred Road. The fast-moving floodwaters were described as 3 feet deep.

The hardest-hit region stretches from Brandermill to Midlothian and Bon Air. Other locations dealing with a flash flood risk include Moseley, Chester, Winterpock, Pocahontas State Park, Skinquarter and the Swift Creek Reservoir area.

According to the National Weather Service in Wakefield, up to 7 inches of rain have fallen in parts of that area since last night, and additional amounts of 1 to 2 inches are possible this morning.

Please do not drive through high water or drive around signs that warn you. This is Otterdale Road and it is not passable. We are extremely busy with calls like this. Turn around. It’s not worth it. pic.twitter.com/bDW1ocM2Xu

A flash flood watch is in effect for the rest of today across metro Richmond, plus all of Southside Virginia, the western Piedmont region and Hampton Roads. Widespread rain will continue across the state until Sunday morning, which could trigger new areas of flash flooding. 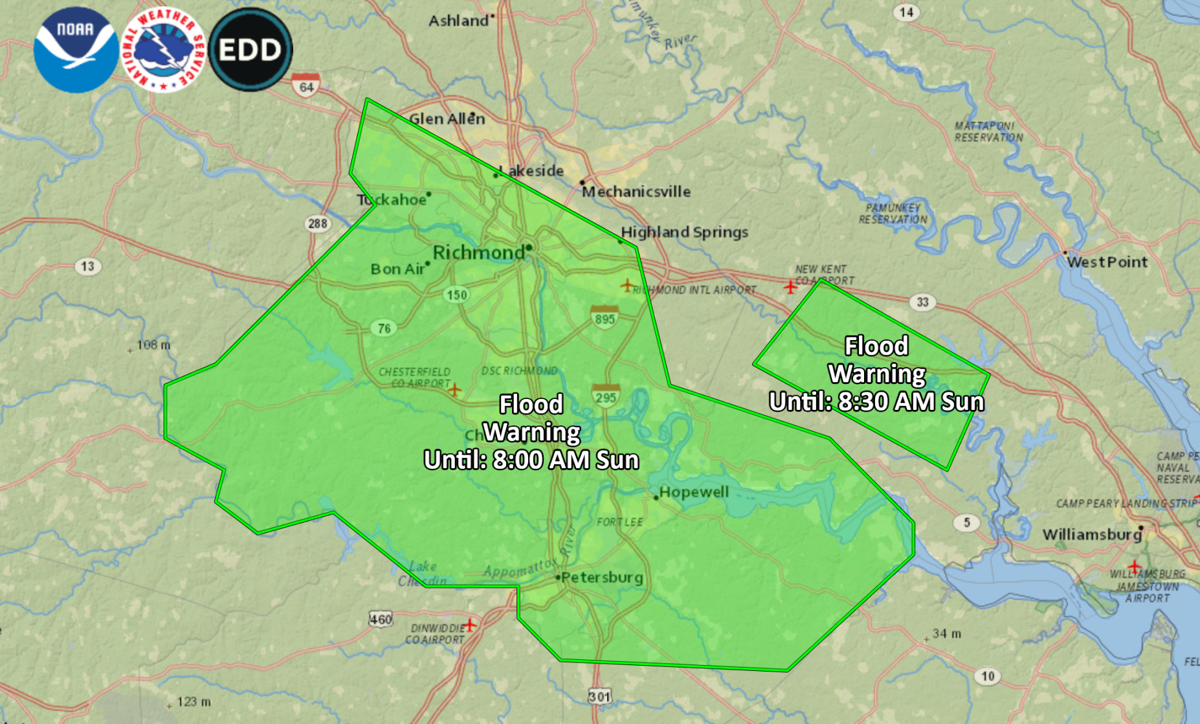 Flood warnings across central Virginia, as of 9:45 p.m. Saturday. 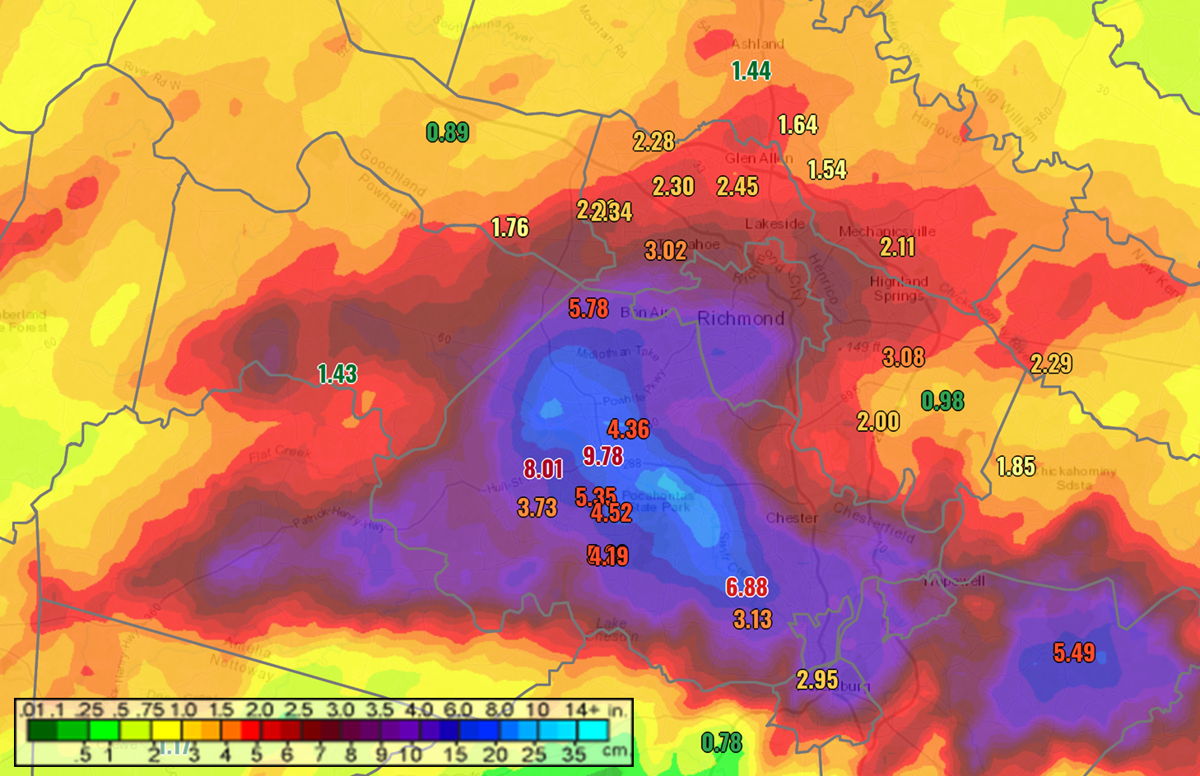 Estimated 24-hour rainfall across metro Richmond from 3 p.m. Friday to 3 p.m. Saturday, with an overlay of selected gauge observations. The areas between Midlothian and Powhatan State Park have seen nearly 10 inches of rain.