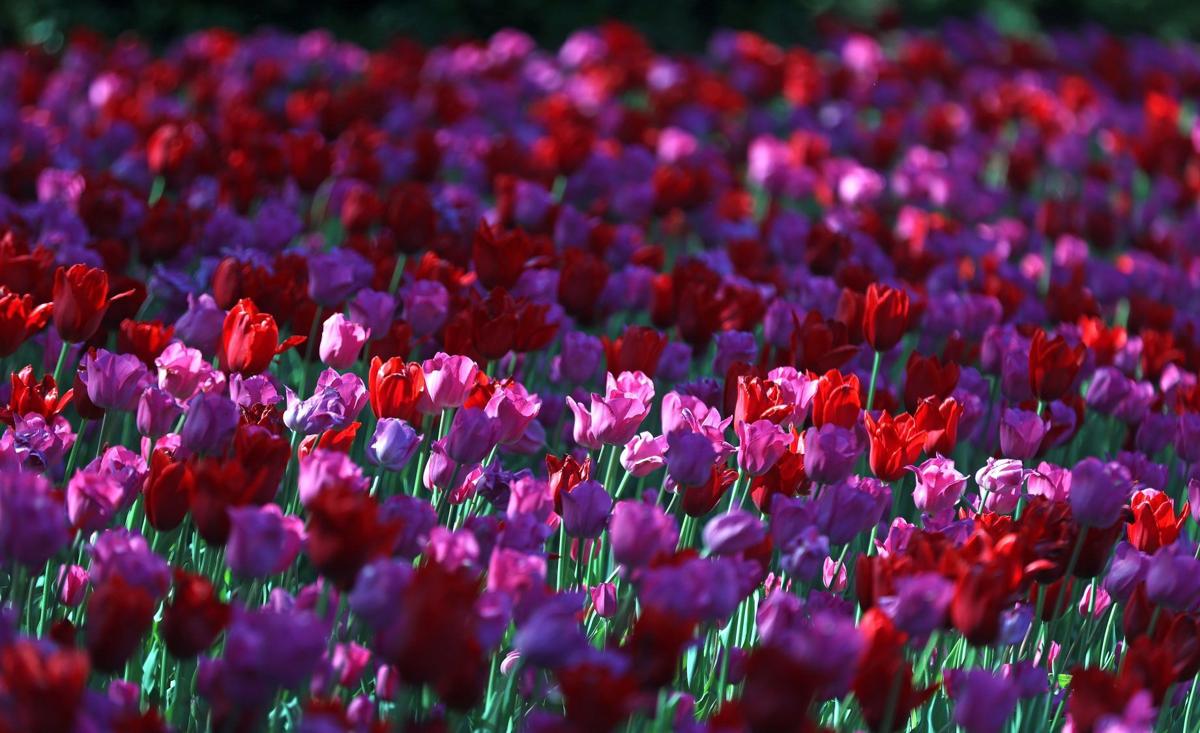 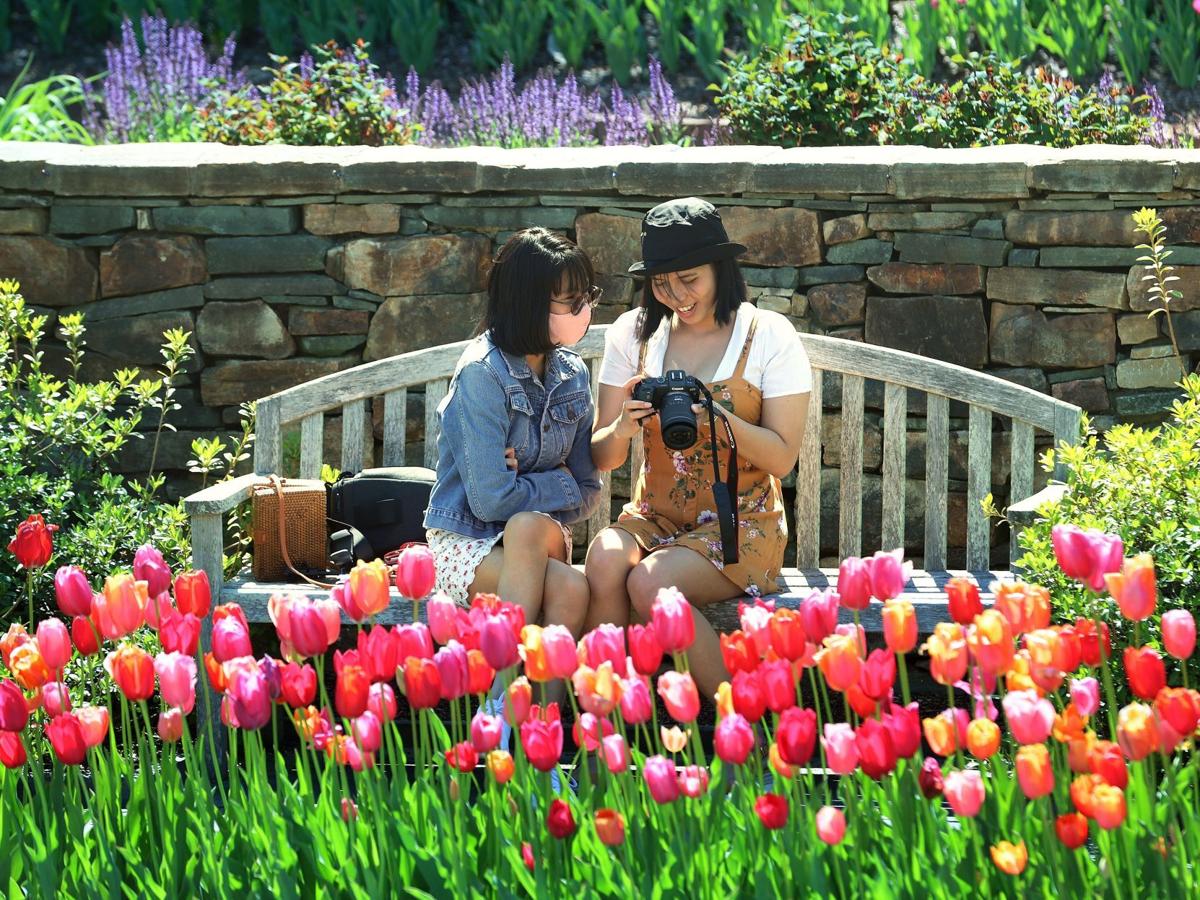 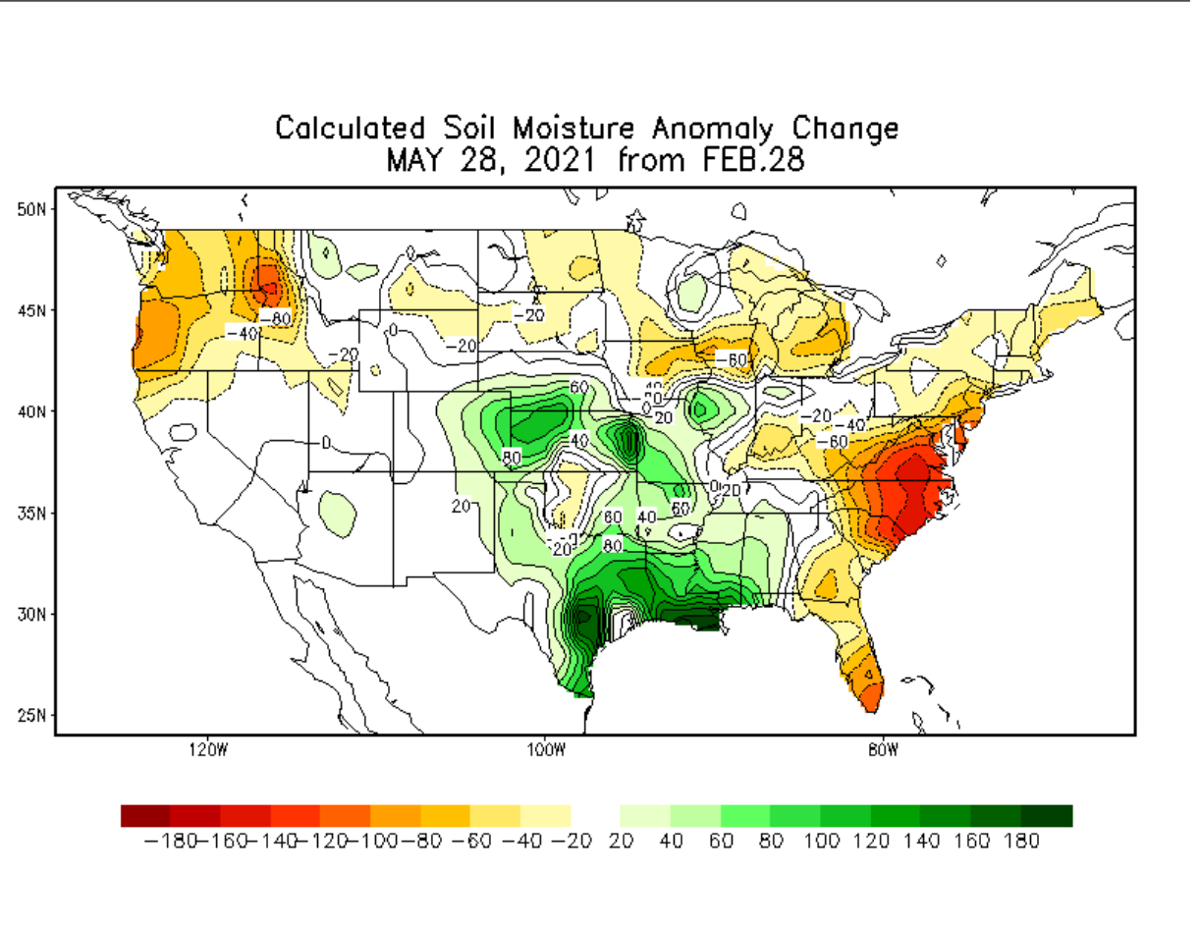 Change in soil moisture anomaly between late February and late May. The darker red colors over Virginia show the largest three-month decline, while the western Gulf Coast has become much wetter since winter. Virginia isn't the driest region outright, it just had farther to fall after a wet winter. 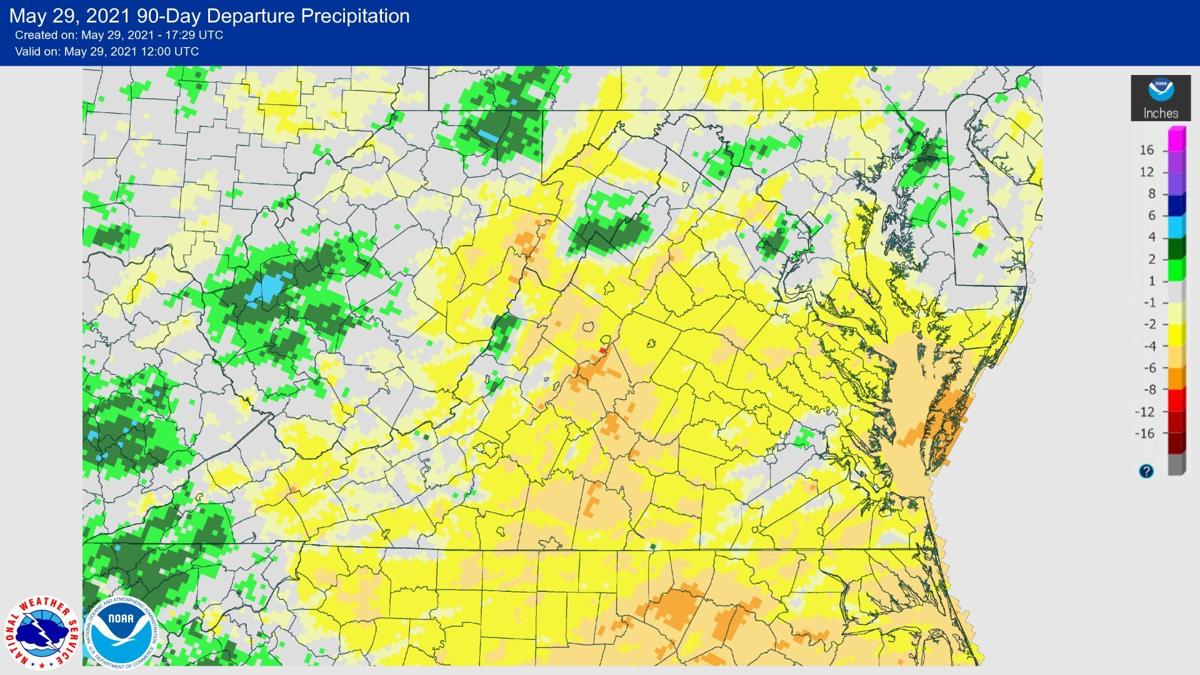 Three-month precipitation as a departure from normal, as of May 29. The yellows and oranges across most of central Virginia show where 2 to 4, even 6 inches of the usual rainfall failed to appear during spring. 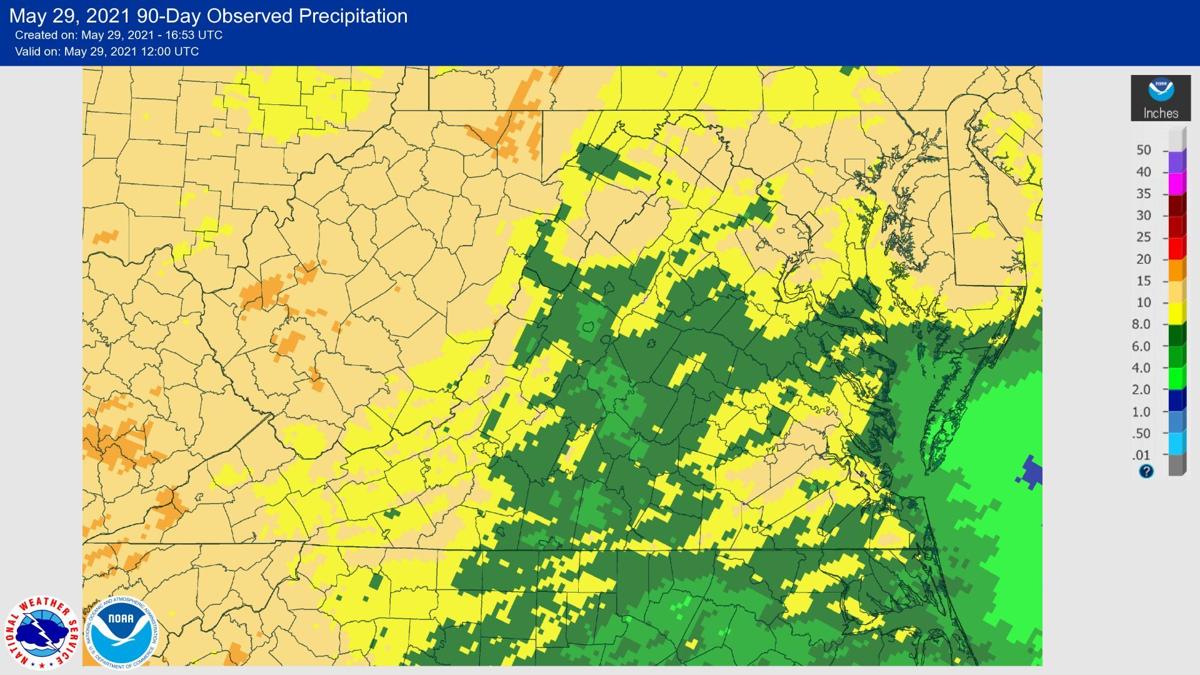 Three-month precipitation across Virginia, as of May 29. 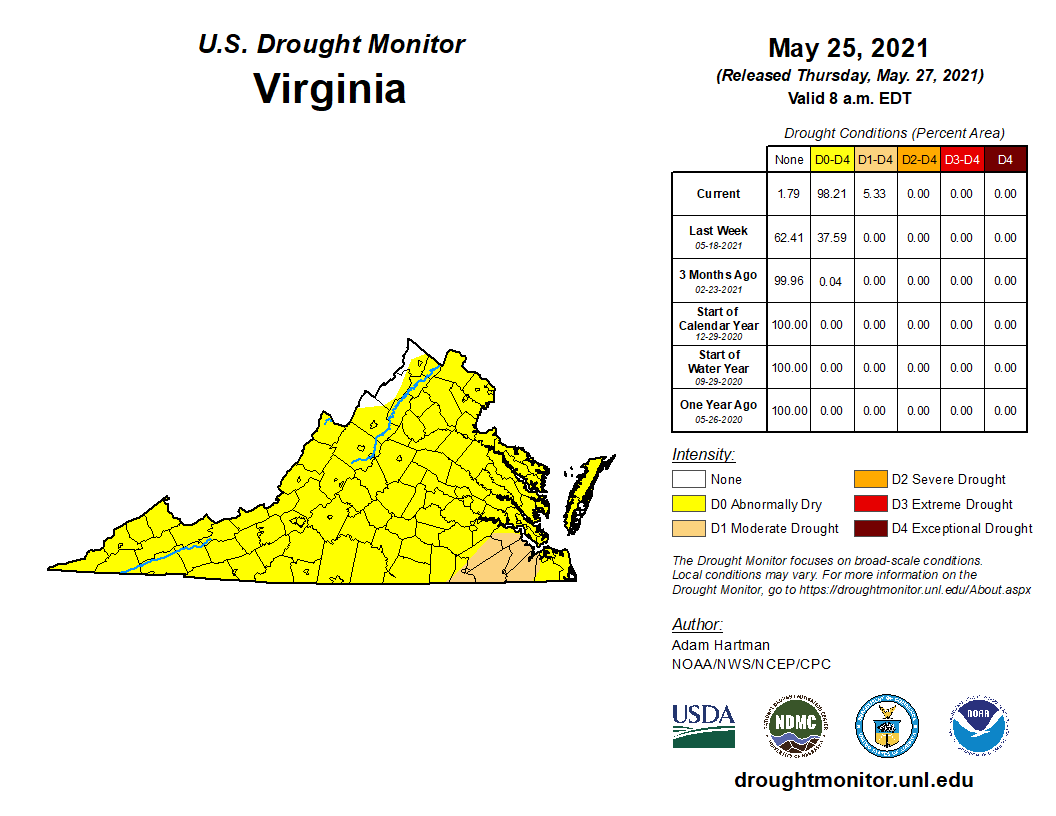 And it may have staved off some worsening agricultural losses.

The downpours and showers from Friday night into Saturday afternoon delivered partial relief to central Virginia’s farms and lawns in the form of 0.5 to 1.5 inches of rain. Some locales south and east of Richmond were a little wetter, while other parts of the Piedmont had less. For the Northern Neck, rain once again came with the unfortunate addition of severe thunderstorm wind damage and tornado threats.

This off-balance spring weather has been detrimental for growing, but beneficial in some other regards.

In March — as often was the case throughout the past year — too much moisture was still the concern. Drought appeared unlikely.

The weather took a drier turn throughout April, then May started to bring the heat, too.

By Thursday, Richmond had the lowest rain total for any late April to late May period since 1936: a mere 0.6 inches over 30 days.

It’s not officially a drought for our area, but it’s getting there.

As of May 25, a new zone of moderate drought emerged across a corner of southeastern Virginia between Emporia, Surry and Chesapeake, according to the latest U.S. Drought Monitor report. That drought also extends down into the coastal plain of the Carolinas. Leading up to this most recent rain, almost the entire remainder of Virginia was in an “abnormally dry” or drought precursor state.

There are currently many more parched places in the United States. Severe drought conditions — or worse — currently cover 25% of the land in the Lower 48. But central Virginia and eastern North Carolina saw the most abrupt (and unexpected) springtime soil moisture reversal on the Eastern Seaboard.

A short-term rainfall deficit of this nature tends to hit farmers well before it affects water supplies and wells.

“Mid-April to Mid-May is just a critical time for everything we’re doing on a farm,” according to T. David Reed, extension agronomist at the Southern Piedmont Agricultural Research and Extension Center in Nottoway County.

“This is the driest planting season that we’ve had in the memory of most of our growers.”

Having to begin irrigation of tobacco fields in spring, rather than June or July, has been unusual, expensive and labor-intensive.

But at the current crop stage, with shallow roots within the top several inches of soil, a lack of moisture from nature becomes much more critical. And the effects have been especially noticeable south of U.S. 460 between Pittsylvania and Mecklenburg counties.

Southside Virginia’s farms mostly dodged harm from April’s late chill and the recent hot afternoons, according to Reed, but high wind in early May was another weather factor that put pressure on tender plants.

This most recent rain could allow some tobacco farmers to finish getting transplants in the ground, more planting of soybean, less stress on corn fields and more grass and hay for grazing cattle.

“The past few years, this time of year has been quite wet,” Reed explained. “So we’ve gone from too wet for the last two or three years absolutely to the other extreme.”

Going forward, the best-case scenario for the tobacco crop would be to keep temperatures below 95 degrees and for about 1 inch of rain to fall every week to 10 days. But even with an ideal summer, Reed estimates that there’s already been a 5% to 10% loss to 2021’s yields.

At Lewis Ginter Botanical Garden in Henrico County, some relatively cool and consistent temperature patterns in April delivered a long and vibrant display of tulips. Then May was beneficial for the roses.

“The cooler nights allowed the roses to put a lot of energy into that bud development, said President and CEO Brian Trader, who is also a horticulture expert. “It’s just extended the life of that display as well.”

But the dry and hotter streak of late hasn’t gone unnoticed, especially when putting in the new annuals that are set to show off throughout the summer.

“It’s been really difficult to ensure that we have the amount of water on those plants so that not only are they not wilting, but they’re able to get those roots into the ground,” Trader said.

Earlier in the spring, the lack of heavy downpours preserved the length of the blooms on the tulips and daffodils. And lower humidity associated with the overall lack of rain has reduced the threat of rose diseases.

“Normally by this time of year we would have had to have sprayed for black spot a few more times than we have,” Trader said.

On the other hand, rain can naturally help rid insect pests so horticulturists are keeping an eye out for aphids and mealybugs.

Along with well-timed rainfall, the flowers and trees would also benefit from a summer that isn’t terribly hot and humid.

“We don’t mind that temperatures get into the 80s or 90s, that’s fine,” Trader explained. “But what we really hope is that in the evenings those temperatures continue to drop.”

Our climate change-fueled trend of steamier summer nights in the 70s puts more stress on plants and humans alike, versus milder 60s.

Lewis Ginter Botanical Garden schedules some extended evening admission hours throughout the summer — until 9 p.m. on Wednesdays and Thursdays — so visitors may take advantage of the cooler part of the day.

• Water in the morning: The best time to water is early in the morning just before dawn. It’s important to get the soil thoroughly wet. The morning sun will dry off the foliage, which lessens conditions for fungal diseases. Watering in the morning is also good because evaporation loss is minimal – the humidity is higher and the winds are calmer.

• Water more deeply and less frequently: This helps establish deeper root systems. For instance, watering once a week, allowing water to drip slowly into the root systems for three to four hours, is more helpful than frequent shallow waterings.

• Water slowly: The best way to water is to allow water to drip through the hose right into the root system. Gushing water is not good because it washes the soil away and the water often runs into other areas instead of soaking in around the plant’s roots. One easy tip is to build a dam of soil around the base of the newly established plant. The dam holds the water in around the plant, allowing it to seep into the root system.

Louisiana had three hurricane strikes last year. Other states have gone decades without. Here's why.

The past several hurricane seasons devastated parts of the United States, yet some stretches of coastline have gone generations without seeing…

The tropics are getting active east and south of Va., but there are no immediate threats

Despite its proximity to the Outer Banks, the average beachgoer wouldn't have known about the latest tropical system without a satellite picture.

Hot 90-degree days are on the rise in Richmond

Severe storms possible in central Va. on Friday ahead of a big weekend cooldown

A dramatic weather change is in store for Memorial Day weekend. It’s good news if you need rain or if you miss that cooler weather that prevai…

Change in soil moisture anomaly between late February and late May. The darker red colors over Virginia show the largest three-month decline, while the western Gulf Coast has become much wetter since winter. Virginia isn't the driest region outright, it just had farther to fall after a wet winter.

Three-month precipitation as a departure from normal, as of May 29. The yellows and oranges across most of central Virginia show where 2 to 4, even 6 inches of the usual rainfall failed to appear during spring.

Three-month precipitation across Virginia, as of May 29.