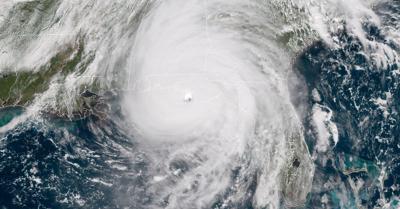 The past several hurricane seasons devastated parts of the United States, yet some stretches of coastline have gone generations without seeing storms like Harvey, Maria, Michael or Laura.

Making a list of the most recent hurricane strikes for a particular area isn't as straightforward as it may seem, and it's even more complicated for Virginia.

Nearly every state in the Eastern United States felt some kind of tropical weather impact during the record 2020 season. Sometimes in the form of a tropical storm, or just remnant rain. But only Texas, Louisiana, Alabama and North Carolina got the full brunt of a hurricane landfall – and three times in the case of Louisiana.

(This story was originally published in September 2017 and updated ahead of the 2021 season.)

What is a landfall?

The eye of a hurricane is essentially the calm in the middle of the storm. Bands of heavy rain and sustained winds of at least 74 mph spin around the eye.

So landfall is defined as the center of a hurricane's eye crossing onto a coastline or over an island.

For example, the eye of 2016's Hurricane Matthew technically only made a brief landfall in South Carolina, but it still brought high wind and storm surge to much of Florida and Georgia and left massive flooding in eastern North Carolina.

There may be a scientific difference between a hurricane landfall and a near miss, but the effects of a more distant storm could actually be worse depending on one's location and the storm in question. In the case of Matthew, North Carolina suffered a higher damage toll from inland flooding than South Carolina, even though the eye missed the state.

That's because storms are more than just a point or a line on a map, or a number on a scale. Destructive storm surge, deadly rip currents, flooding rains and even tornadoes can hit hundreds of miles away from where a hurricane's eye comes ashore (if it even does make landfall to begin with). But the strongest winds and highest coastal inundation will often be found close to the center of a hurricane and along the right side of the eye's path.

The lists below describe multiple situations: the last direct landfall in each state, and the last time a state had any hurricane wind conditions from a storm that did not make landfall. Where applicable, there's also a listing of each state's most recent major hurricane landfall and the most intense on record. Major is defined as Category 3 or higher on the Saffir-Simpson scale with sustained winds above 111 mph.

Here's an updated guide for each coastal state plus Hawaii, Puerto Rico and the U.S. Virgin Islands, based on records from the National Hurricane Center.

• Last hurricane conditions in the coastal region while the center of a storm tracked offshore: Irene in August 2011.

• Last hurricane conditions from a storm that crossed in via North Carolina: Isabel in September 2003.

Many hurricanes have left behind floods, power outages and beach erosion in Virginia, but there's never been a recorded instance of the eye of a hurricane coming ashore between Virginia Beach and Chincoteague.

In official records going back to 1851, all hurricane-force conditions here were caused by storms that first made landfall in North Carolina or tracked right offshore.

Many hurricanes slam into neighboring North Carolina, but few bring hurricane-force winds into the interior of Virginia because moving over land deprives a storm of its fuel.

Isabel counts as a hurricane strike for Virginia, even though it clearly wasn't a Virginia landfall.

Other storms that brought damaging winds to the commonwealth after a North Carolina landfall were Fran in 1996, Hazel in 1954, the Chesapeake-Potomac hurricane of 1933, and "the Gale" of 1878.

A violent hurricane that blew northwest into Virginia in 1667 might have come ashore around the mouth of the Chesapeake Bay, but it's difficult to know for sure based on the lack of weather data from that era.

There are some instances of weaker tropical storms making a direct path onto the Eastern Shore, like Danielle in 1992, Dean in 1983 and Bret in 1981. One with a similar path could come again, and it might be stronger.

It's entirely possible that the eye of a hurricane could someday land directly on our shore by taking a similar southeast-to-northwest or east-to-west path, but the concave shape of our coastline and prevailing upper-level winds from the west and southwest will keep it from happening often.

• Last hurricane impact, though it made landfall in North Carolina: Isaias in August 2020.

• Last major (and most intense) landfall: Category 4 Hugo at Sullivan's Island in September 1989.

• Last hurricane impact, though it made landfall in Florida: Michael in October 2018.

• Last hurricane impact, though it made landfall in Alabama: Sally in September 2020.

• Most intense landfall: Frederic in September 1979.

• Last hurricane impact, though it made landfall in Louisiana: Zeta in October 2020.

• Most intense landfall: Camille in August 1969.

• Last landfall: Zeta in late October 2020 (shortly after Laura in August and Delta in early October).

• Most intense landfall: Camille in August 1969.

• Last hurricane impact, though it made landfall in Louisiana: Laura in August 2020.

The Mid-Atlantic and Northeast

• Last landfall: none on record.

• Last hurricane impact: Sandy in October 2012. Sandy lost tropical characteristics as it moved over cooler waters shortly before making landfall in New Jersey, but it remained a powerful area of low pressure. The effects were destructive despite this technical distinction.

(Originally, Gloria had been reported as a Category 2 or 3 strike on Long Island, but an expert reanalysis concluded that it was more likely Category 1.)

• Last major (and most intense) landfall: Hugo in September 1989.

• Last landfall, also major and the most intense on record: Iniki in September 1992.

Why do some places get hit more often than others?

It's part geography, and part meteorology.

States with a relatively short coastline compared to its neighbors, like Mississippi and Alabama, are essentially a smaller target. So over time, direct landfalls are less frequent there compared to their larger neighboring states like Florida or Louisiana. Hurricanes, of course, aren't aware of where our boundaries are drawn.

But a hurricane will 'feel' the effects of the cooler ocean temperatures off the Northeast United States, especially early in summer or late in autumn. That makes it harder for a hurricane to maintain its strength or status as it heads north to the Mid-Atlantic or New England. At some point it may weaken to a tropical storm like Irene in 2011 or morph to a post-tropical low like Sandy in 2012. The effects for such a densely-populated area can still be severe.

Steering winds in the atmosphere also cause some of the disparity in landfall risk on the East Coast. The prevailing winds during summer and fall are from the southwest or west. So once hurricanes trace the western edge of the Bermuda high and veer farther north, they're often being pushed a bit eastward and back out to sea. So places that jut out from the continent, like Florida and North Carolina (and Massachusetts, to some extent) are just more exposed and prone to taking the brunt of a storm. For places like Georgia or Maryland or Maine, which are somewhat nestled into the shape of the coastline, the odds are better that typical storms will make contact with some other landmass first. That can also weaken it.

For that reason, many storms that parallel the Eastern Seaboard don't show their full destructive potential on land. But not every storm will be typical.

Tropical Storm Bill is spinning away from the U.S., but a new storm looms in the Gulf

Hot 90-degree days are on the rise in Richmond

Severe storms possible in central Va. on Friday ahead of a big weekend cooldown

A dramatic weather change is in store for Memorial Day weekend. It’s good news if you need rain or if you miss that cooler weather that prevai…

Flowers and crops are feeling this spring's weather extremes in central Va. 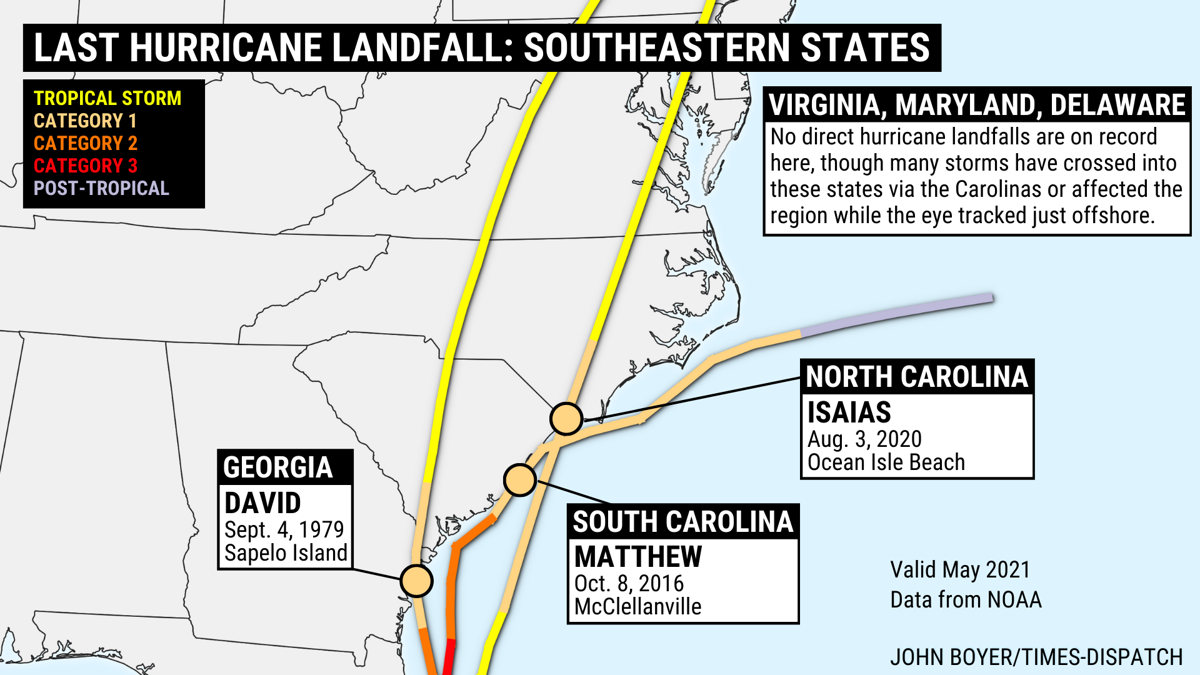 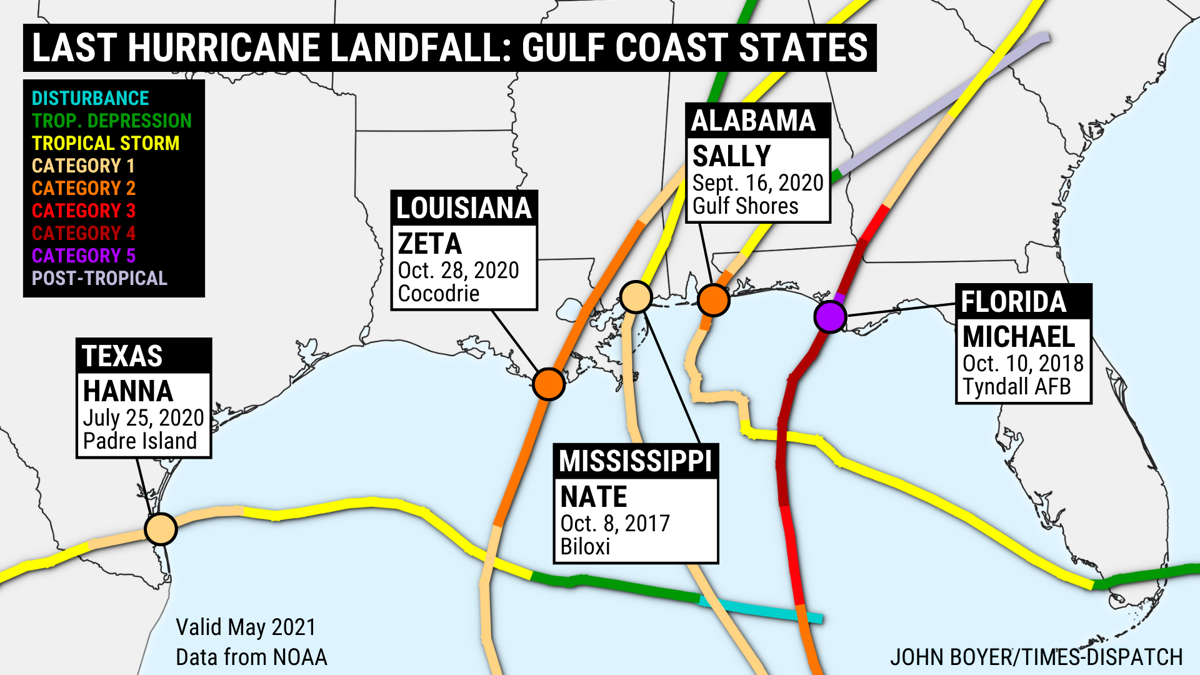 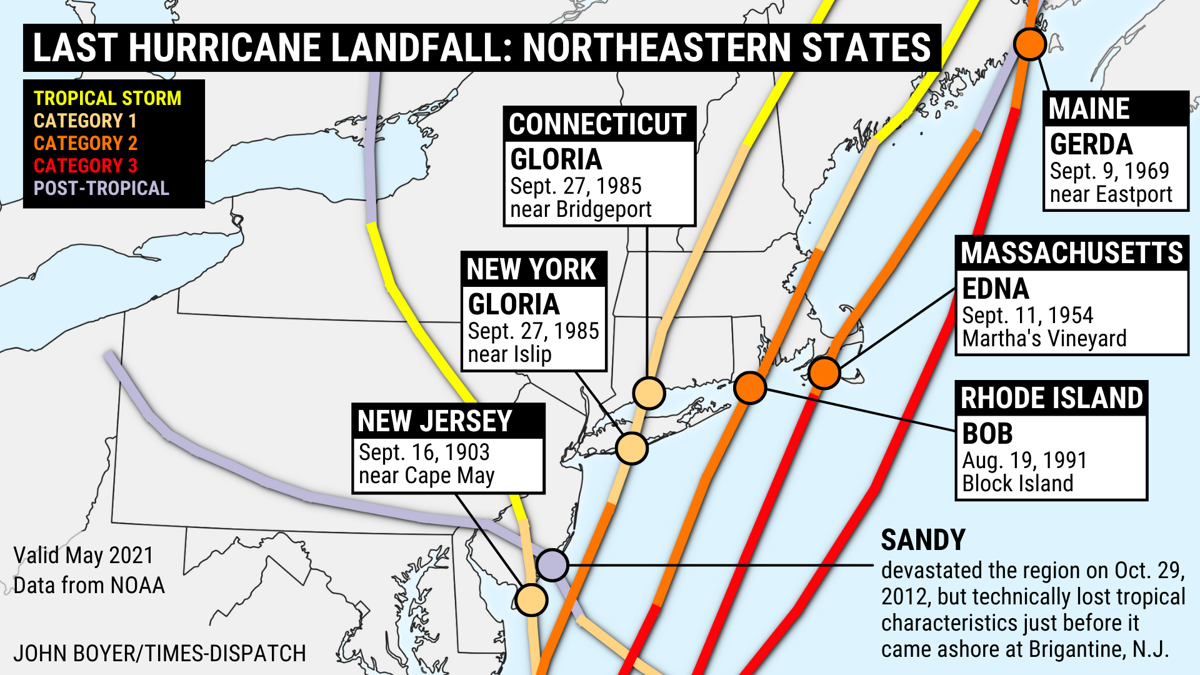 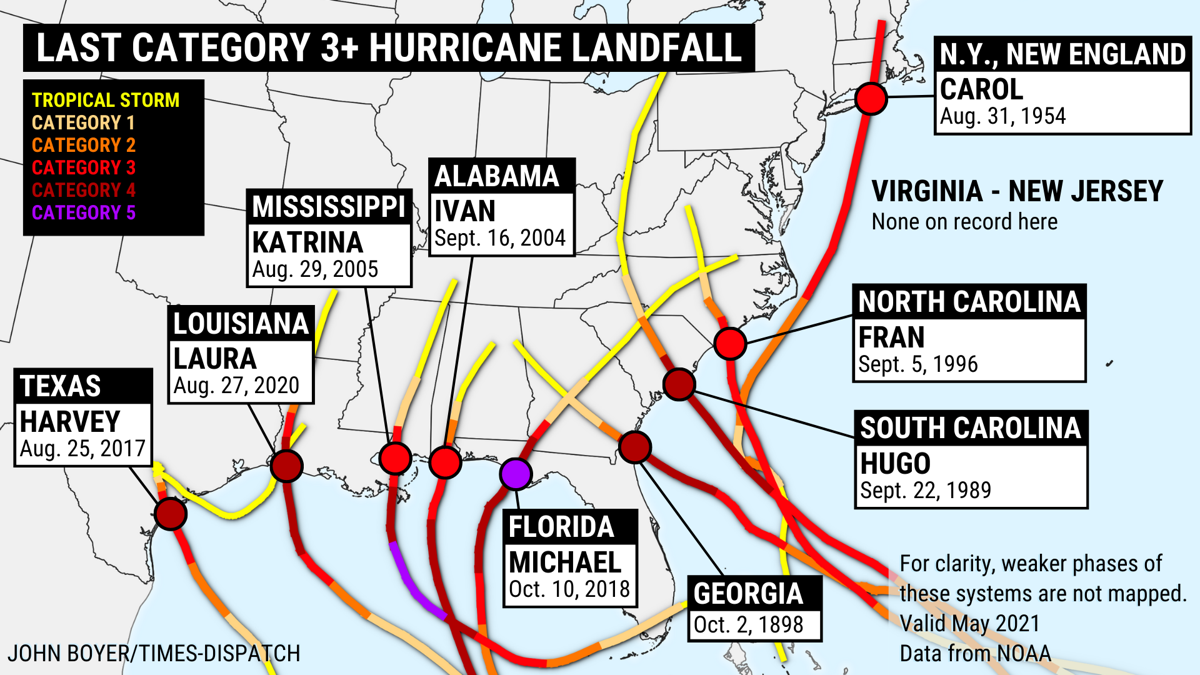 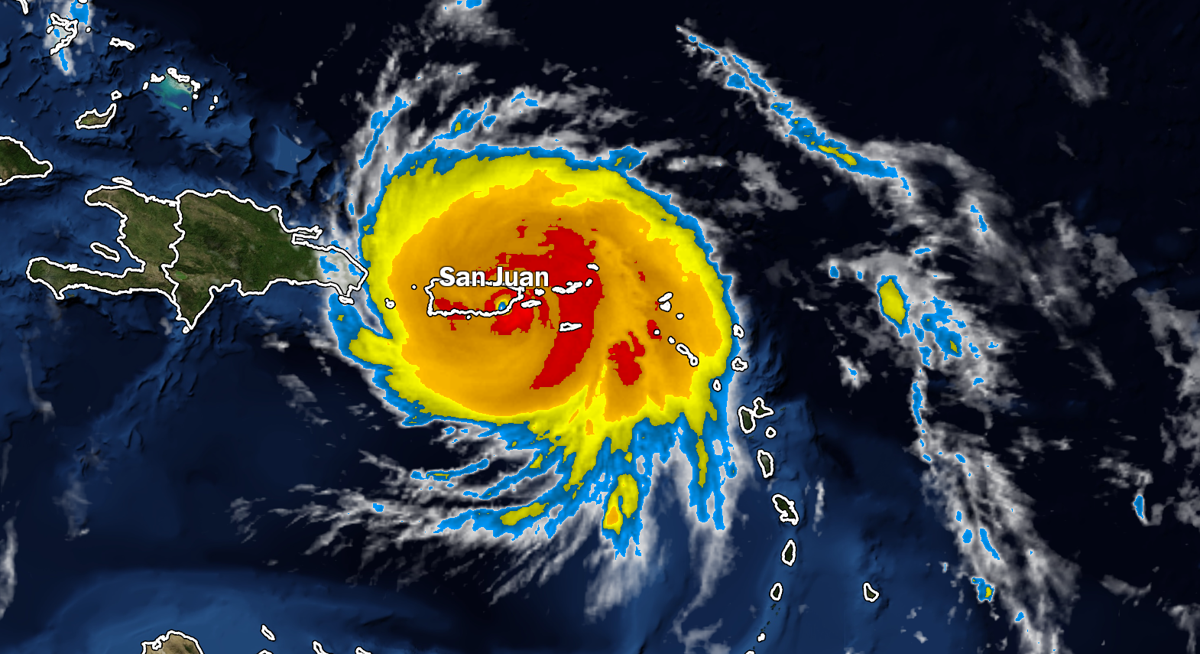 Infrared satellite view of Maria making landfall in Puerto Rico on the morning of Sept. 20 as a powerful Category 4 hurricane. 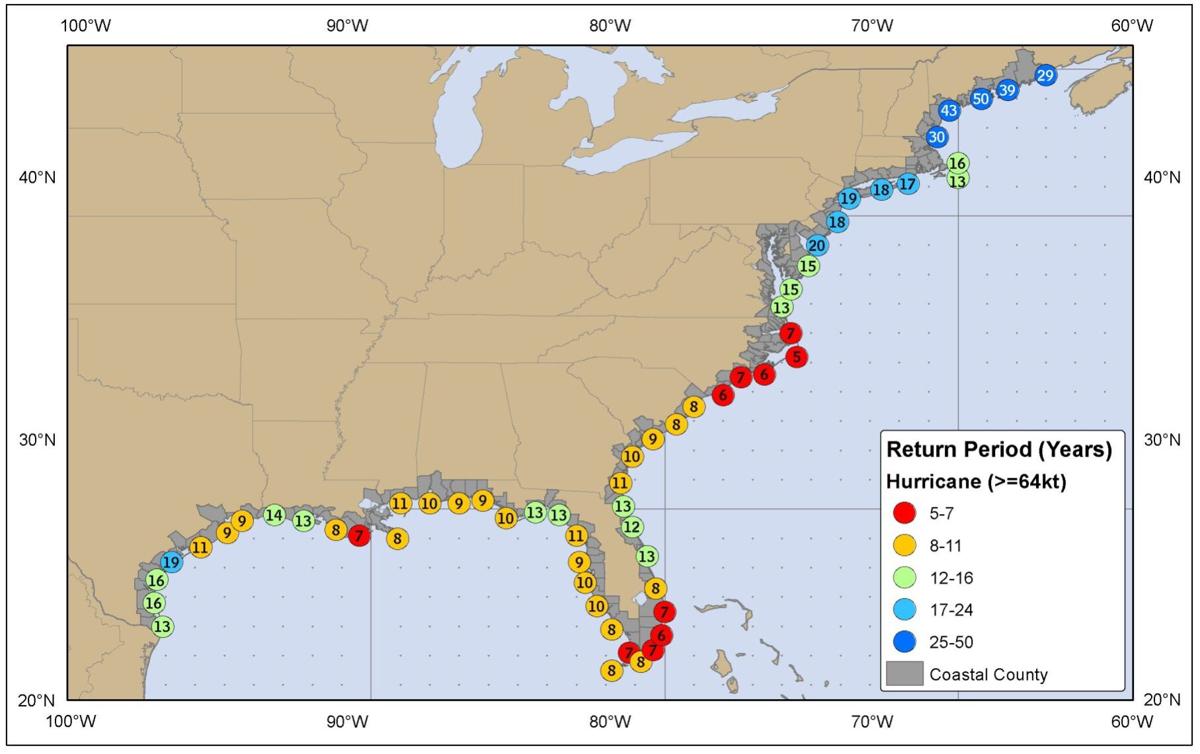 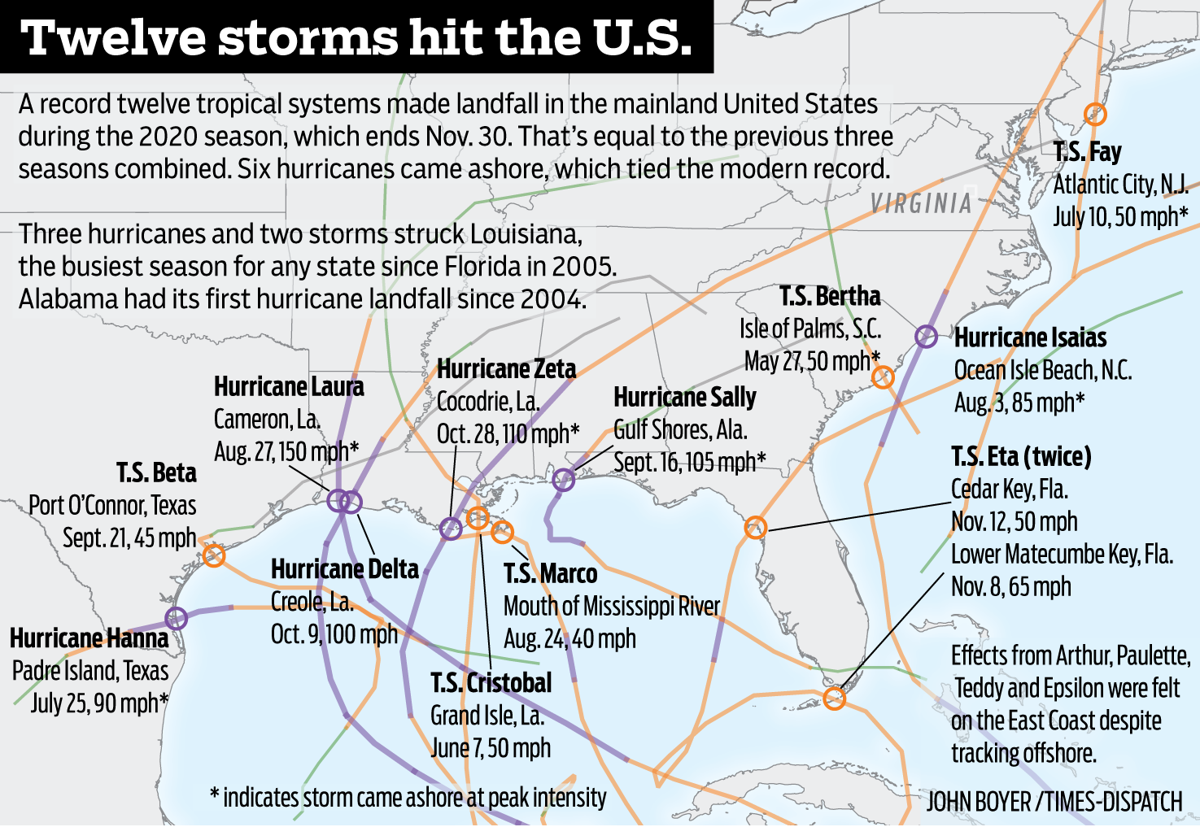 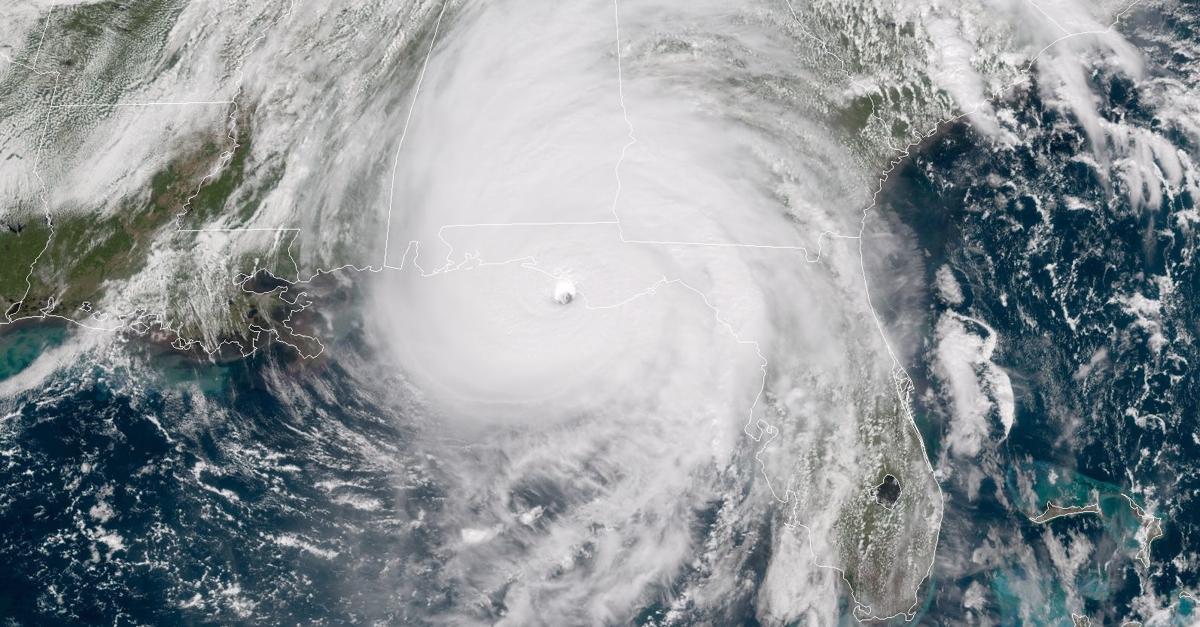 Analysis showed winds were stronger than previously thought during Hurricane Michael’s landfall, bumping it to a Category 5 storm. 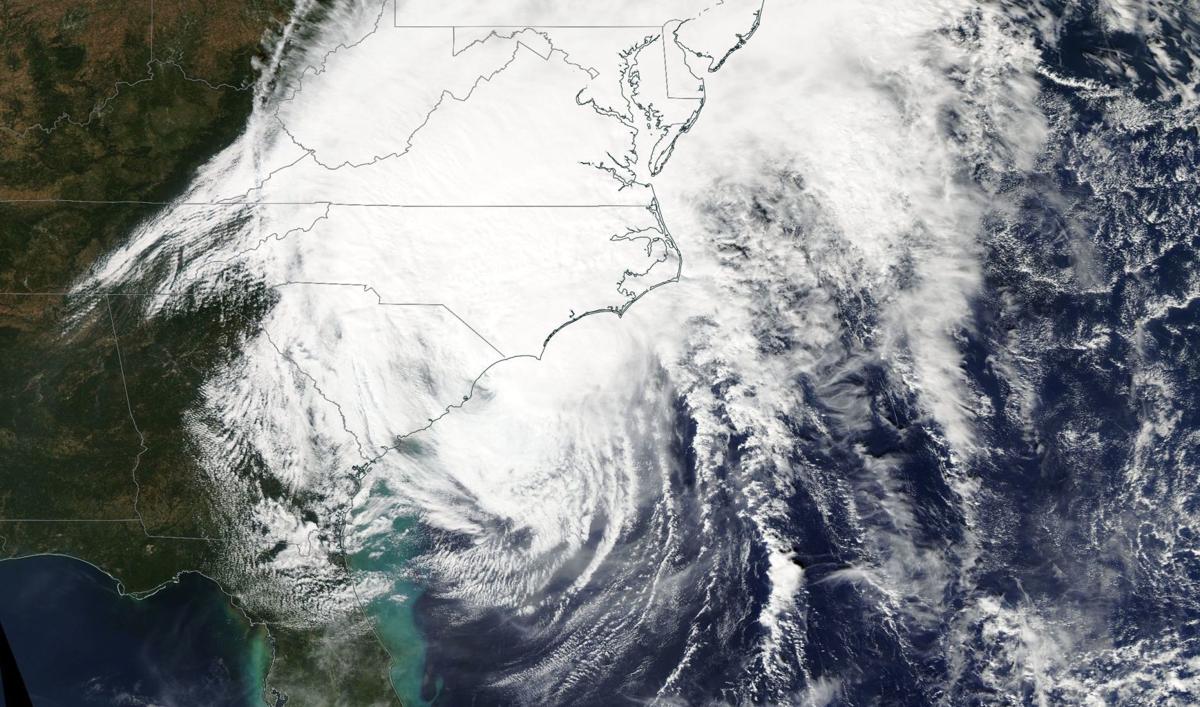 The center of Hurricane Matthew passed barely offshore on Oct. 8-9, 2016, but its torrential rain spread inland and caused record flooding on the Neuse River in eastern North Carolina.

Animated radar map of Hurricane Fran making landfall at Cape Fear on the evening of Sept. 5, 1996. 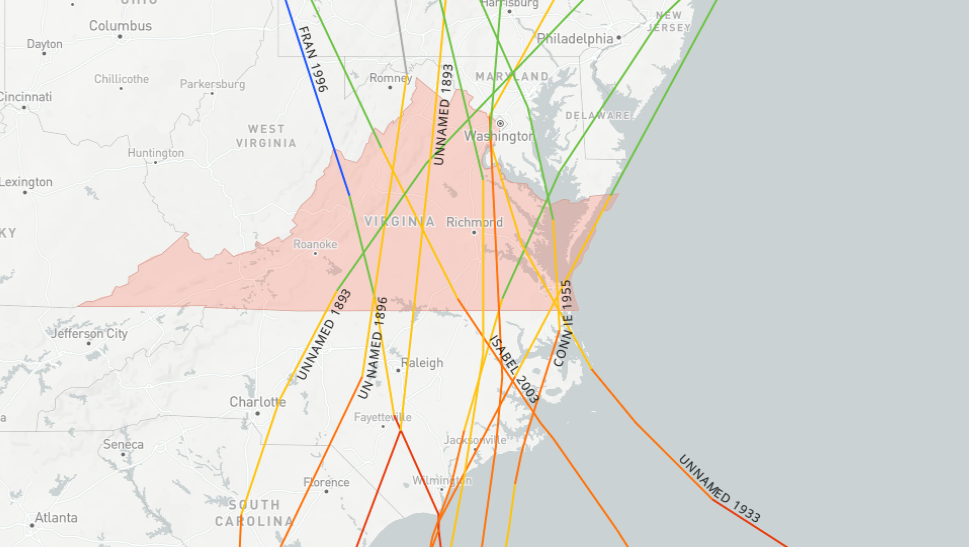 Tracks of some historic hurricanes that maintained their strength upon reaching Virginia, despite not making landfall here. 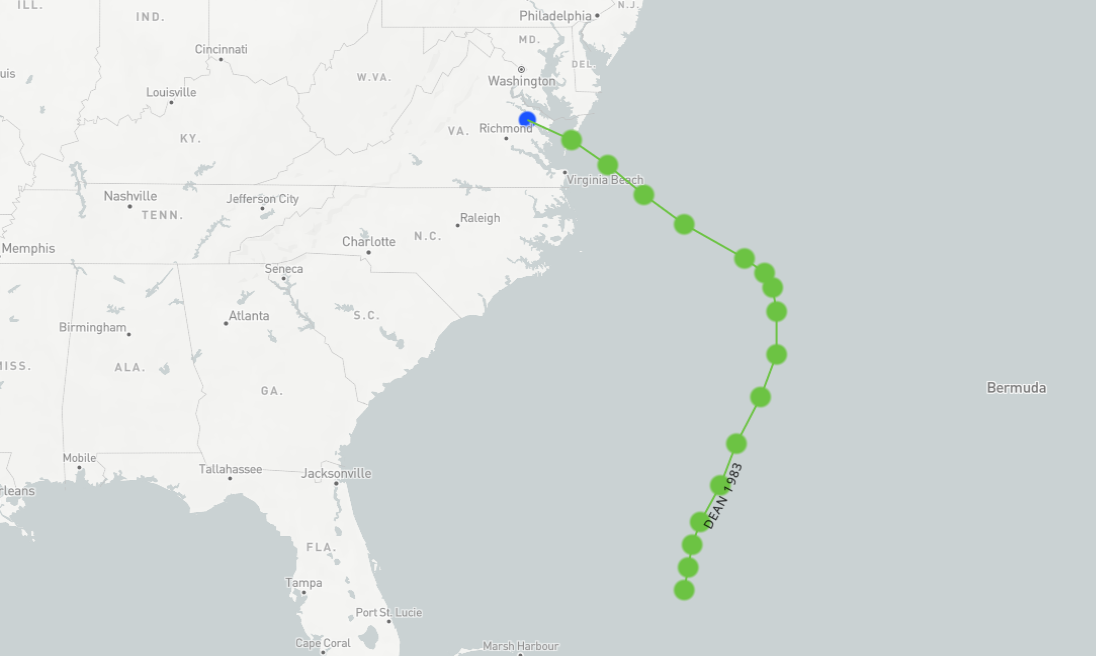 Track of Tropical Storm Dean into Virginia's Eastern Shore in 1983. 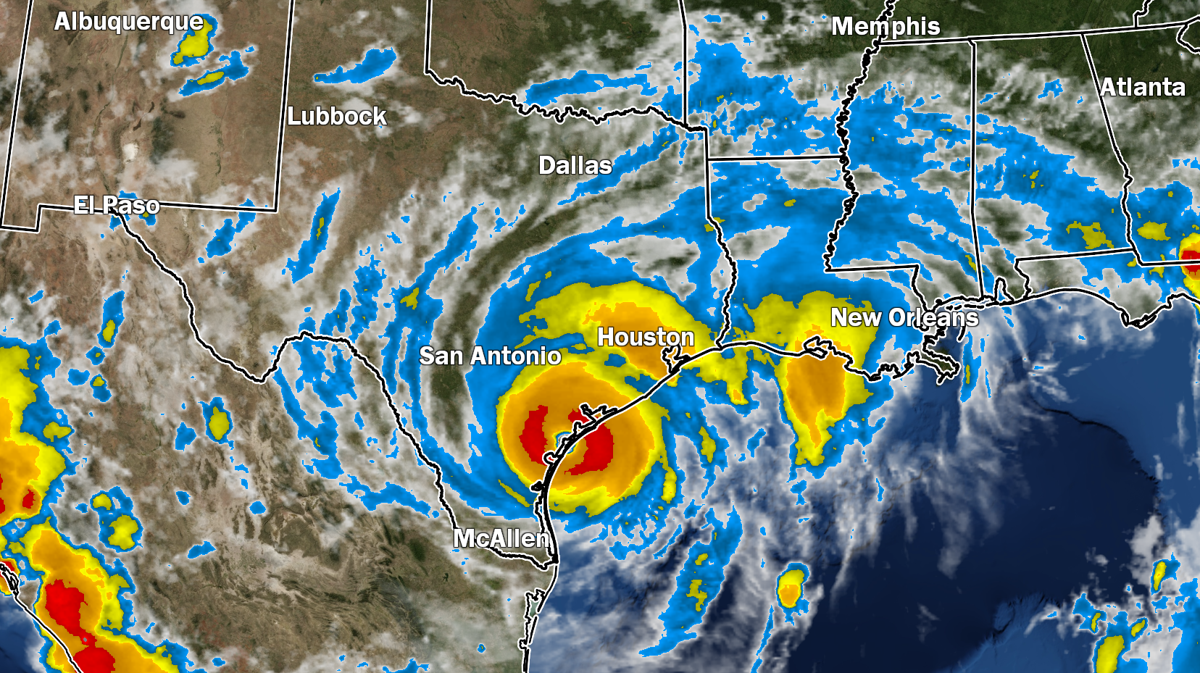 Infrared satellite map of Hurricane Harvey making landfall near Rockport, Texas on the evening of Aug. 25. 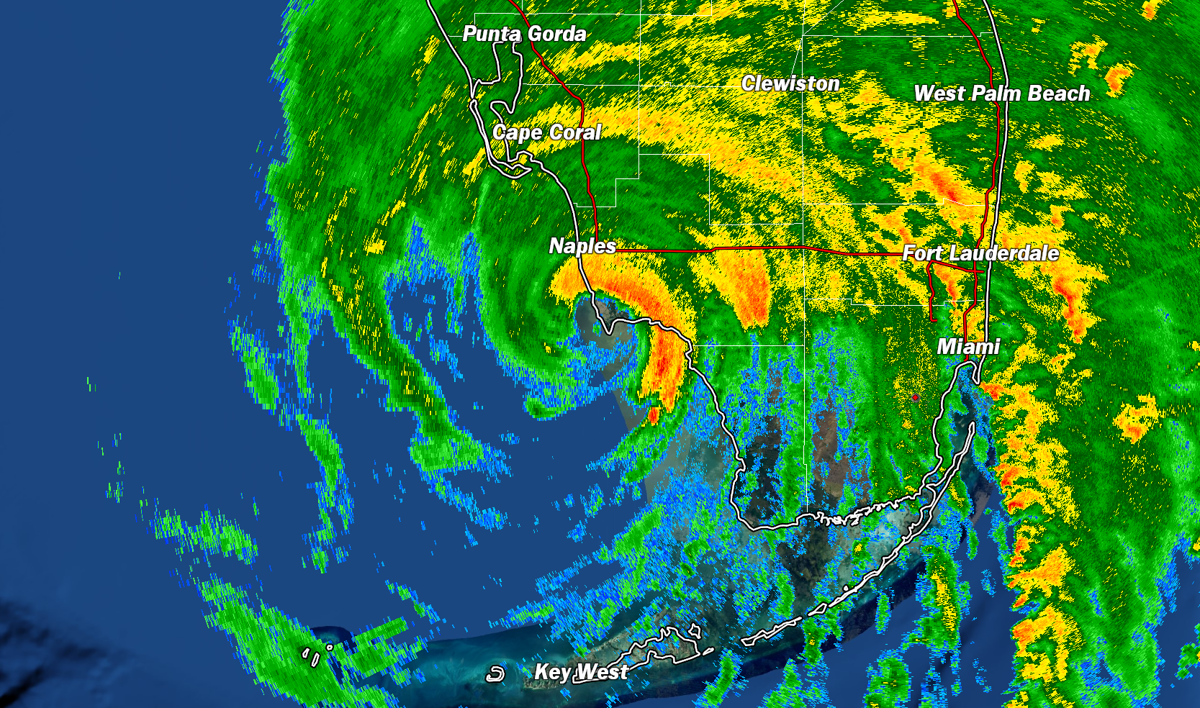 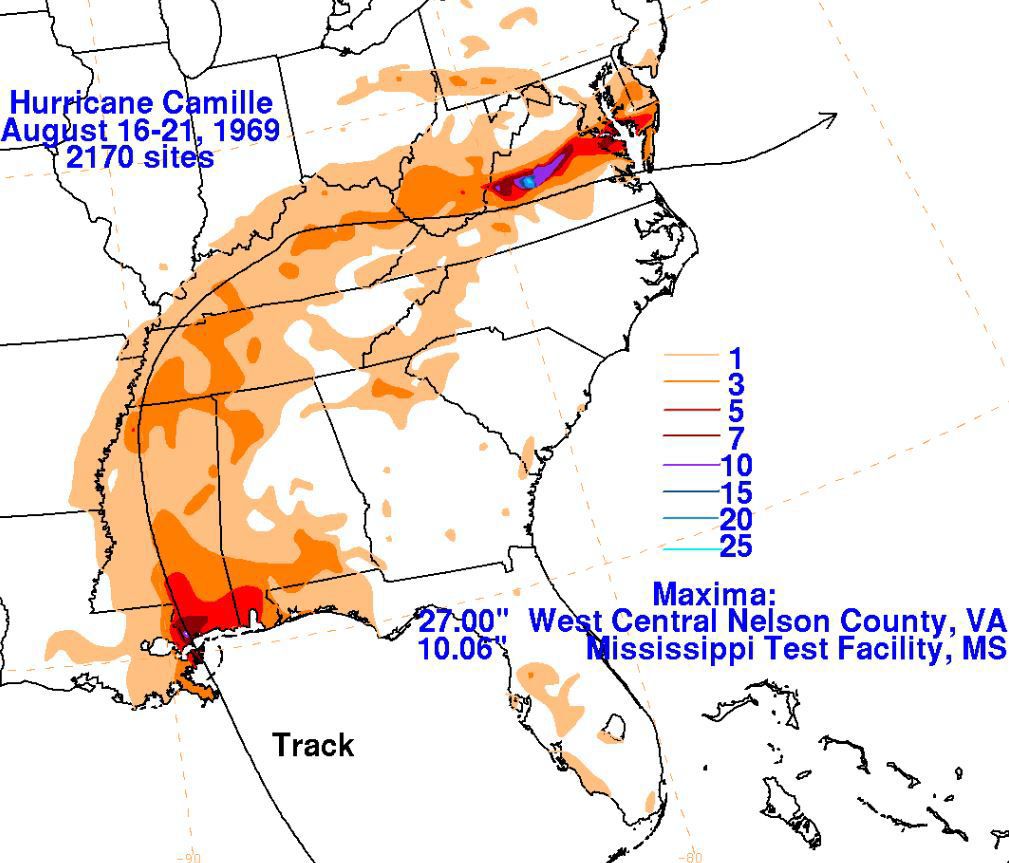 Map of rainfall totals left by Camille between Aug. 16 and Aug. 21, 1969. After initially depositing heavy rain near its Gulf Coast landfall site, the amounts dwindled over the Ohio Valley. The heaviest rains fell in Virginia, far from where it came ashore.