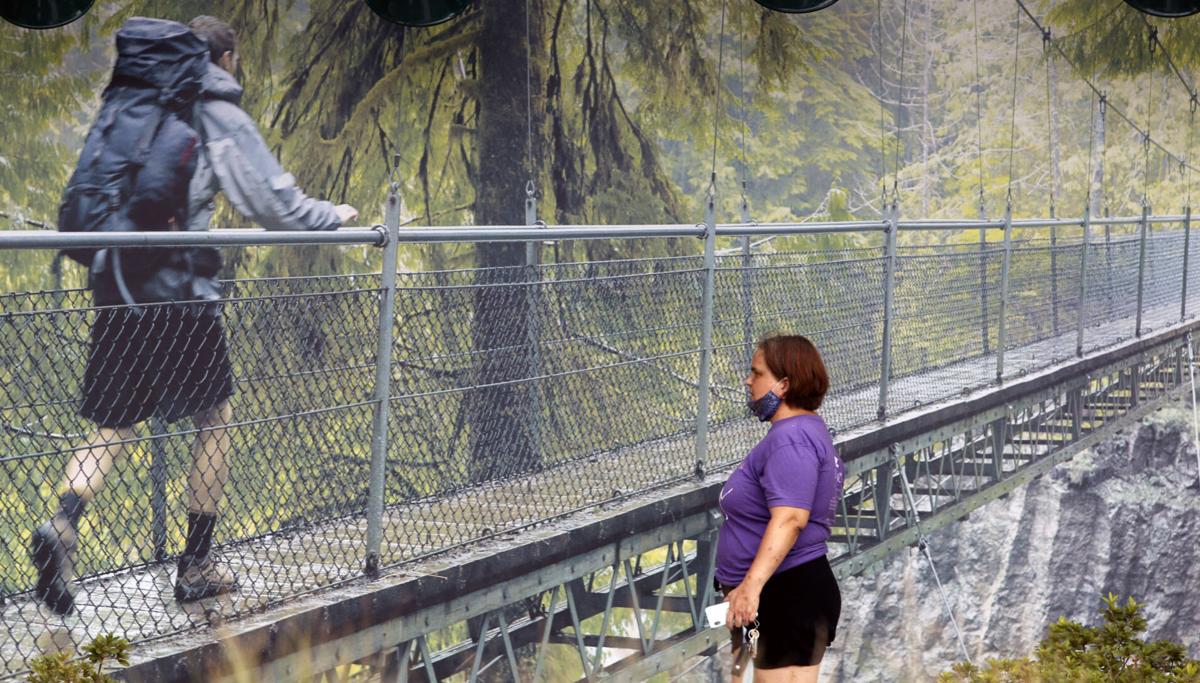 A pedestrian walks past a giant photo of a hiker crossing a bridge on the outside of Dick's Sporting Goods in the Willow Lawn Shopping Center in Richmond, VA Monday, Sept. 28, 2020. 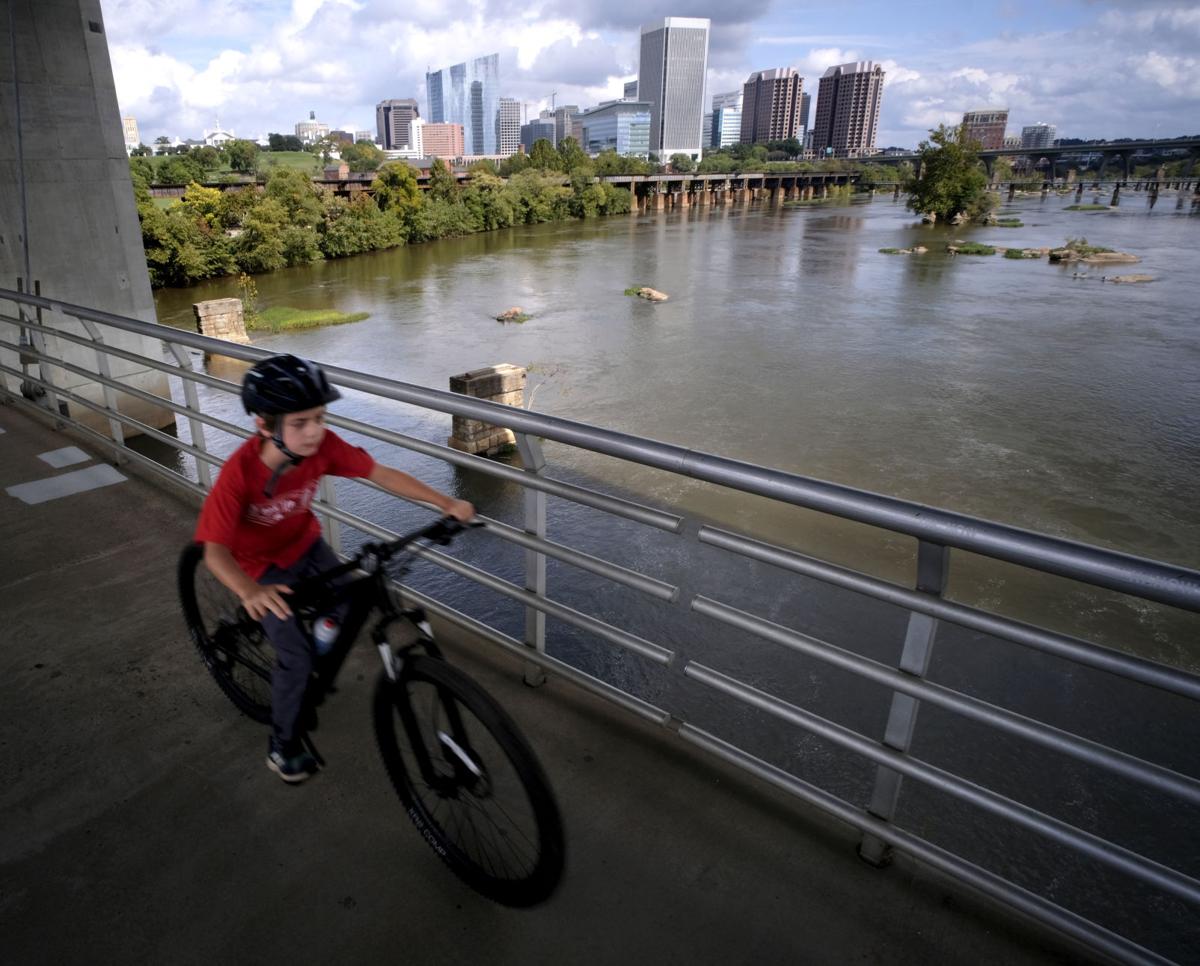 Truman Austin, 11, rode his bike across the Belle Isle pedestrian bridge in Richmond on Tuesday during an outing with his father, Jonathan (not shown). This month has been the coolest September since 2009. 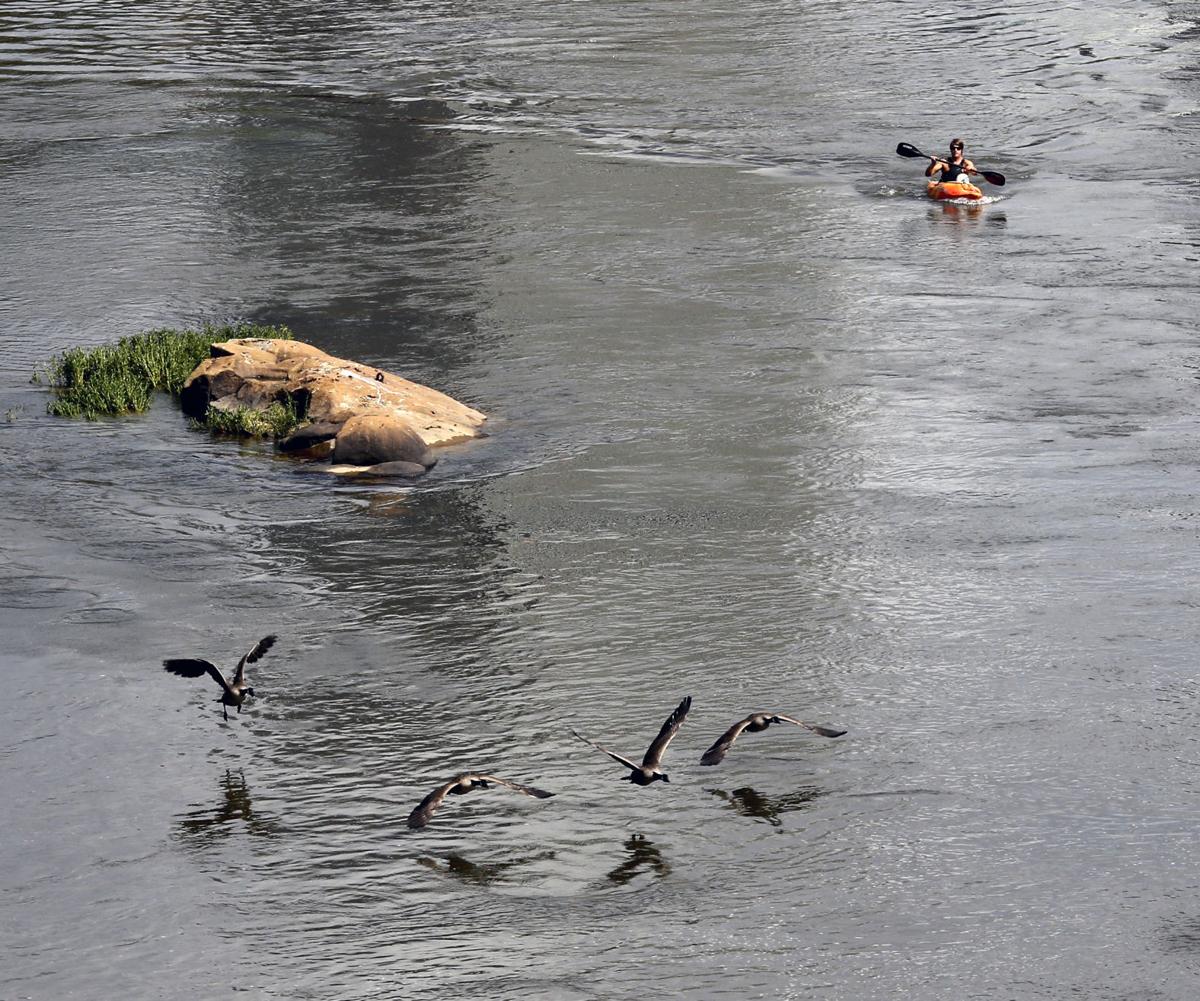 Four Canada Geese take flight after a kayaker neared close to the Lee Bridge over the James River in Richmond, VA Tuesday, Sept. 29, 2020. 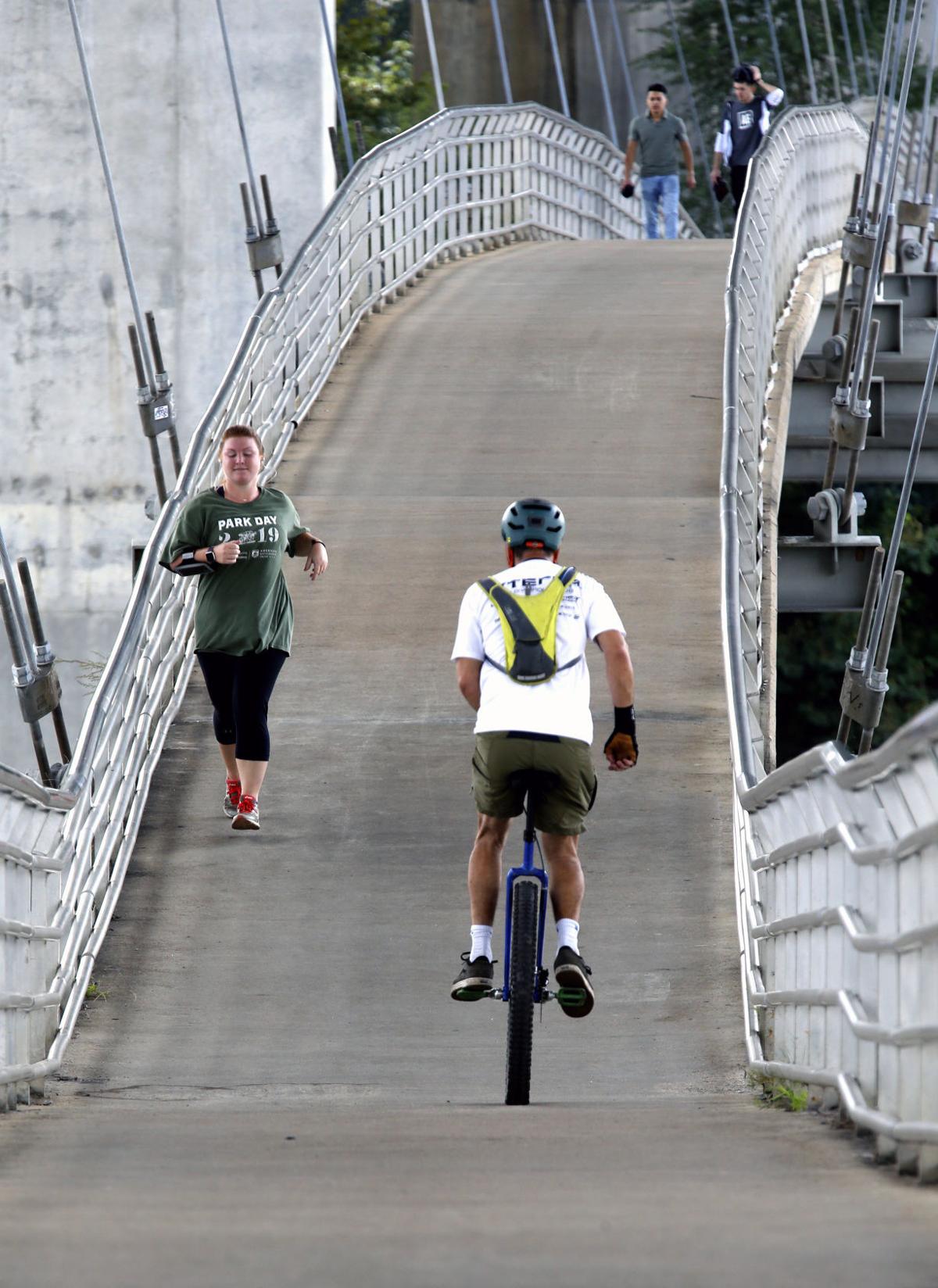 A unicyclist, right and a jogger pass each other on the suspension bridge over the James River in Richmond, VA Tuesday, Sept. 29, 2020.

October will actually feel like October, at least to start.

The next wave of crisp fall weather heading for central Virginia will crest just in time for our weekend enjoyment.

Vanguard leaf peepers heading west will find lower 60s for highs in the valleys this weekend, 50s in the highlands and even some afternoon 40s on the ridgelines. Lows will trend in the lower 40s to lower 30s, depending on elevation.

But instead of flirting with record levels of chill in metro Richmond like we did earlier this month, we’re approaching a point on the calendar where those readings are just moderately below normal.

What a difference two weeks makes when it comes to climatological comparisons. And what a huge difference one year makes.

Last year saw one of the hottest starts to October in Richmond’s history. I was away from the area then, though I didn’t feel like I missed much when the thermometer soared to 98 on Oct. 2 and 97 on Oct. 3.

Both highs set daily records, and nearly hit a monthly extreme. In the past 123 years, only one October day was hotter in the Richmond area: a high of 99 on Oct. 6 in droughty 1941.

That makes for a considerable year-to-year swing. Just as a fun thought experiment, if we were talking about a cold weather departure of an equal size to kick off October, that would be like having a high of 53 and a low of 31. (Indeed, Oct. 3, 1974 set our earliest freeze with similar readings).

For the foreseeable future, we’re not quite there yet.

If you’re looking for near-100 degree weather this weekend, you’d have to head to the Mojave and Sonoran deserts of California and Arizona. The ridge-in-the-west, trough-in-the-east weather pattern that will prevail over the country for the next week will bring a shot at record highs and continued high wildfire danger for the West Coast.

Meanwhile, comfortable readings will dwell for several days in the eastern half of the nation. But it may come at the price of some minor rain chances as reinforcing cool fronts come through early next week.

Past the range of the weekly forecast, signs point to the return of toastier weather patterns for Virginia by the back half of the month. But by then, “above-normal” would probably translate to 80s rather than 90s.

The National Oceanic and Atmospheric Administration expects above-normal October mean temperatures over most of the Lower 48. The highest odds for that scenario stretch from California to Texas, and from the Mid-Atlantic to New England.

Most of Virginia is looking at even chances of October rainfall winding up above, near or below normal. Drier-than-normal October weather looks most likely from the Southwest to the Tennessee Valley. The places with the best chances of an October surplus are the Pacific Northwest, where it would be welcome, and Florida, where it may be an unwelcome sign of active tropics.

The busy hurricane season could still be a big wild card in our October outlook, too.

The National Hurricane Center is watching the western Caribbean Sea between Jamaica and Mexico, where conditions are ripe for a new tropical system to form over the next several days. We’ve exhausted the routine naming list and entered the backup realm of the Greek alphabet, so the next storm would be called “Gamma.”

There’s no specific threat to the U.S. at this time, but we can’t let our guard down as if the season were over.

October is typically one of Richmond’s drier months, and we’re coming off a wetter-than-usual September. It’s not much of a risk to say that the next month will be a step down, precipitation-wise. But it’s also a “go big or go home” time of year for rain, where a day or two of hurricane remnants can make up much of — or most of — the monthly total.

We can’t bring you September’s final rainfall figure yet, given a chance for showers into early Wednesday. But as of Tuesday afternoon, the monthly sum at RIC airport was 5.24 inches.

That’s already twelve times wetter than the last one. September 2019 saw just 0.42 inches, which tied for fourth-driest of the past 133 years.

Even in our warming climate, the contrasts for a particular time of year can still be huge. Two years ago, 2018 nearly beat out 1921 to have Richmond’s hottest September, then sizzling, dry 2019 ranked just behind in third place.

September 2020’s mean temperature looks to be below normal, right about 70 degrees. Though this wasn’t anywhere close to our record-cool Septembers from the 20th century, this was:

A pedestrian walks past a giant photo of a hiker crossing a bridge on the outside of Dick's Sporting Goods in the Willow Lawn Shopping Center in Richmond, VA Monday, Sept. 28, 2020.

Truman Austin, 11, rode his bike across the Belle Isle pedestrian bridge in Richmond on Tuesday during an outing with his father, Jonathan (not shown). This month has been the coolest September since 2009.

Four Canada Geese take flight after a kayaker neared close to the Lee Bridge over the James River in Richmond, VA Tuesday, Sept. 29, 2020.

A unicyclist, right and a jogger pass each other on the suspension bridge over the James River in Richmond, VA Tuesday, Sept. 29, 2020.