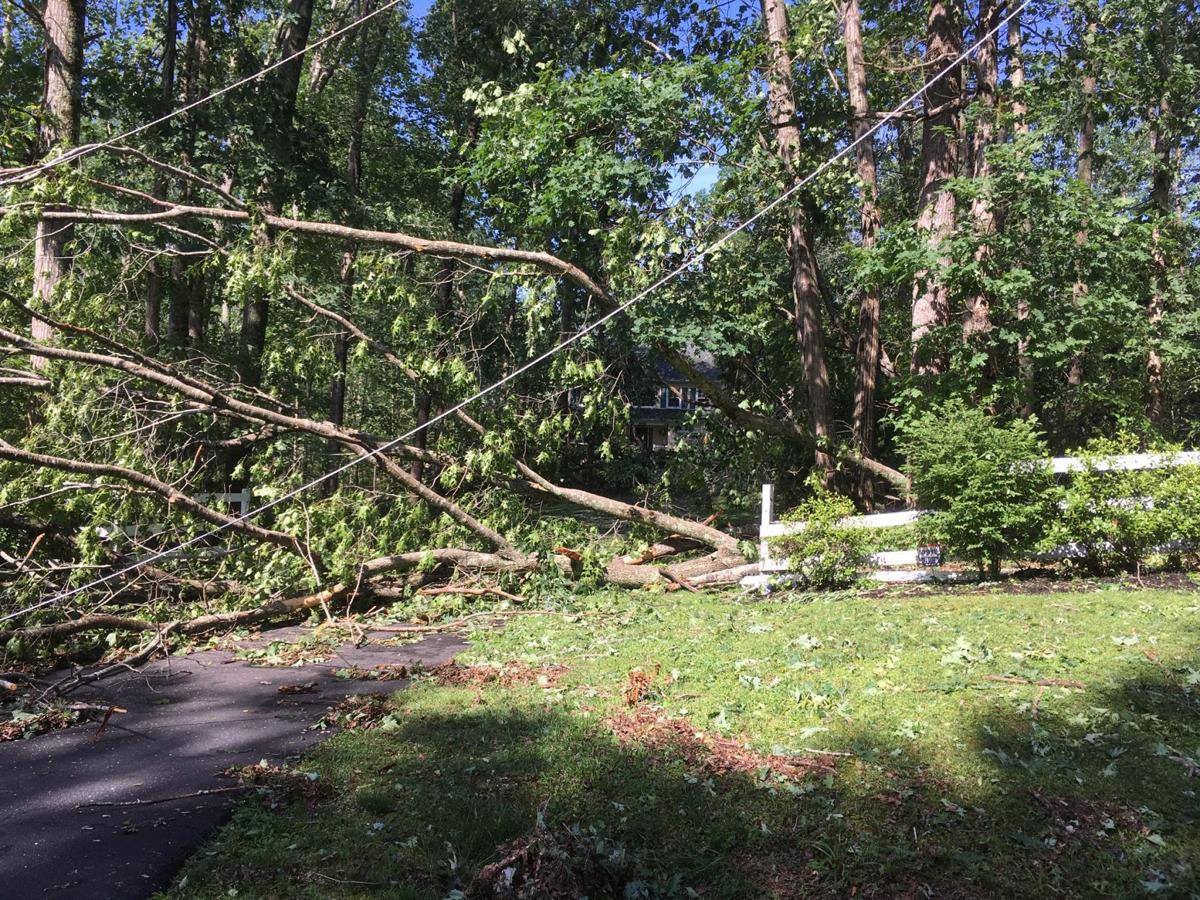 Many homes on Longwood Drive in North Stafford had trees down, and power lines were on the ground. 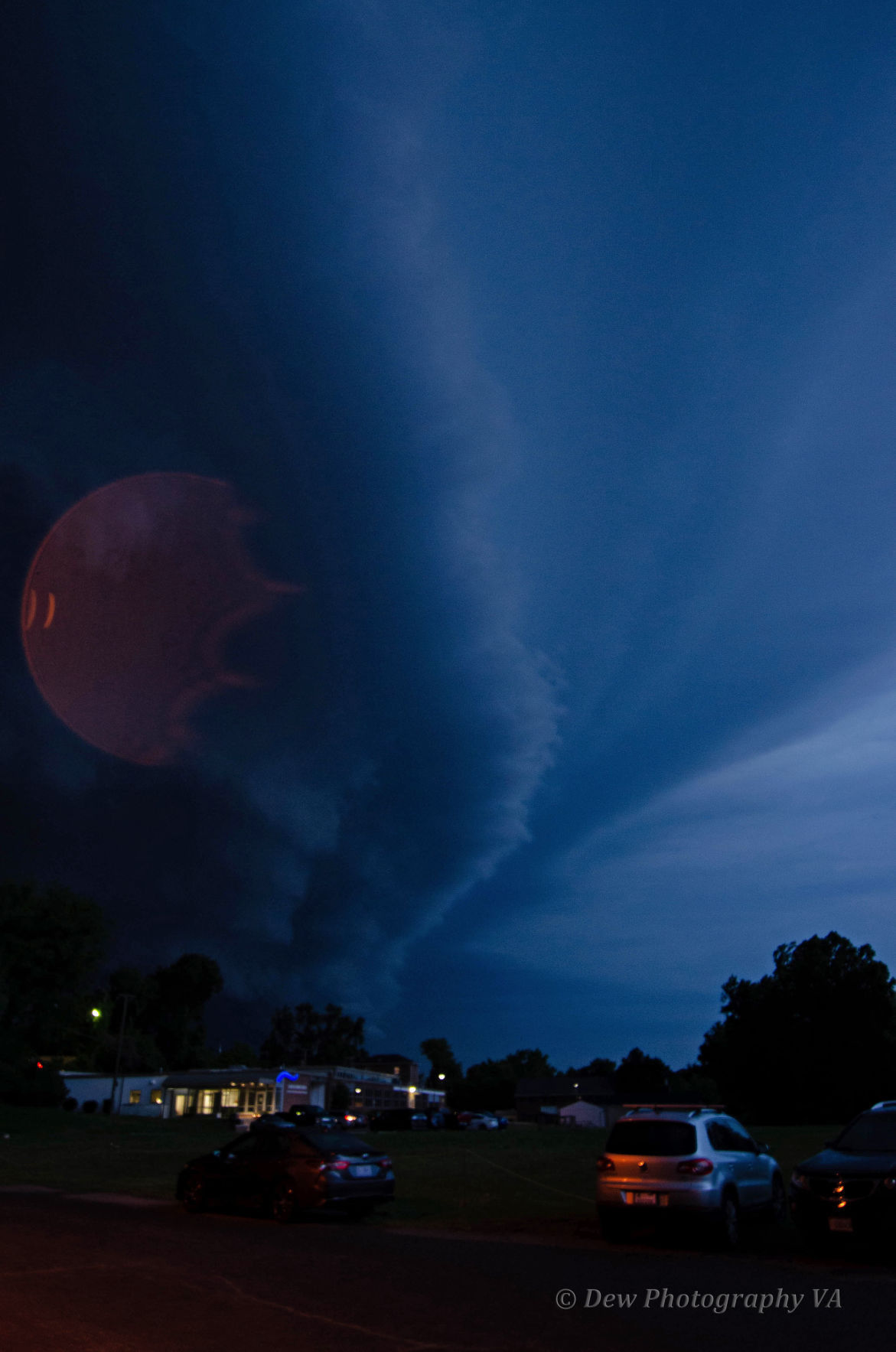 An ominous cloud formed over the Fredericksburg National Cemetery Saturday night, bringing an abrupt end to the annual Memorial Luminaria.

By CATHY DYSON THE FREE LANCE–STAR

A supercell, the strongest and most severe type of thunderstorm, tore through the Rock Hill District of North Stafford on Saturday night with damaging hail and winds between 60 and 80 mph, according to the National Weather Service.

It was particularly bad along Longwood Drive, off State Route 610. Desi McGlade, a member of the county’s Community Emergency Response Team, saw the devastation for himself Sunday morning.

“When I turned onto Longwood, I was just amazed,” he said. “Snapped power lines, snapped poles, wires were down all over the place. A few of the houses had trees fallen on them.”

Some questioned if a tornado or microburst, an intense small-scale downdraft, had hit Stafford about 8:30 p.m. Saturday, but initial analysis from the NWS showed “it was just severe, straight-line winds” without a lot of rotation evident, said Andrew Snyder, meteorologist.

But it was a compact, long-lived single thunderstorm that originated in eastern West Virginia, strengthened as it crossed the Interstate 81 corridor and caused a reported tornado in Warrenton. Then, it merged with a second storm and picked up more power before hitting Stafford, Snyder said.

Residents were asked to avoid the area around Longwood Drive Sunday morning, and a portion of Brooke Road, which was closed for a period because of the storm.

The Red Cross placed those affected by the storm in shelters.

“There was a small number of displaced residents and animals due to damaged homes,” Spence said.

More than 760 customers of Dominion Energy and Northern Virginia Electric Cooperative were without power on Sunday, but almost all of those homes had electricity restored by Monday.

The storm also brought a quick end to the 24th annual Memorial Luminaria at Fredericksburg National Cemetery, scheduled from 8 to 11 p.m. Dawn Whitmore, a Spotsylvania County photographer who typically focuses on old barns, was there with her daughter, Carlee, who saw the brewing storm clouds and said, “Mom, we gotta go.”

When Whitmore turned around, she saw an ominous cloud that looked like a funnel in the sky, which she photographed.

“People have called it numerous things [including] supercell storm, shelf cloud, scud cloud and tornado,” she wrote in an email. “I don’t know what it actually was, except a funnel-looking cloud.”

Ask the Weather Guys: Why do we have a new normal in weather?

The new climate normals for Madison are warmer, wetter and snowier.

A surprise tornado tore across Northumberland County on Monday afternoon.

Watch Now: It's a springtime winter wonderland in Wyoming

Heavy snow fell on a chilly spring morning in Cheyenne, Wyoming, on Monday, May 10.

Thanks to new railings installed along the Golden Gate Bridge, high wind in San Francisco now creates a ghostly sounding harmonica-like sound from the landmark, heard for miles in all directions.

This slow start to central Va.'s severe weather season is no reason to get complacent

Compared with January-to-April counts for previous years, this is the slowest severe weather pace for central Virginia since 2012. The stormiest part of the year still lies ahead.

Many homes on Longwood Drive in North Stafford had trees down, and power lines were on the ground.

An ominous cloud formed over the Fredericksburg National Cemetery Saturday night, bringing an abrupt end to the annual Memorial Luminaria.