Tropical Storm Elsa is most likely to be remembered as a rainmaker for central Virginia, but effects varied greatly within the Richmond metro area alone.

The rainfall in southern Chesterfield County was 20 times heavier than northern Hanover.

Here's a preliminary summary based on National Weather Service reports and data.

The main cluster of flood reports on Thursday evening coincided with the bull's-eye of heaviest rain between Chester and the Tri-Cities.

Elsa's heaviest 2 to 4 inch amounts fell in a southwest-to-northeast oriented band just to the west of the track of the low pressure center, between Kerr Reservoir, the Tri-Cities, Middle Peninsula and Northern Neck.

At most, 5.57 inches fell near Swift Creek between Pocahontas State Park and Colonial Heights. Several other gauges in the Petersburg vicinity topped 4 inches.

A slight 20-mile shift in the storm's track might have put that torrential, flooding rain over Richmond instead, while the opposite nudge could have put the worst conditions in Williamsburg.

Most of central and eastern Virginia saw at least 1 inch, except areas north and west of Short Pump.

Amounts were lighter and spottier over western and northern tiers of the state, but locally heavy near Roanoke.

Richmond International Airport reported 1.94 inches, which went down as a daily record for July 9.

That was the wettest day (and first daily rainfall record) at the RIC weather station since December.

Flooding is not expected on the James River and most main rivers in the region.

The National Weather Service expects minor flooding this weekend on the Nottoway River between Rawlings and Stony Creek, on the Meherrin River near Lawrenceville, and the Chickahominy River near Providence Forge.

Elsa's center of circulation passed right over Emporia, Williamsburg and Tangier Island as it swirled to the northeast.

But as predicted, the strongest winds blew on the southeastern flank of Elsa to the right of that track, near the Chesapeake Bay and Atlantic coast.

Several areas in Tidewater clocked gusts above 40 mph, with one unofficial report up to 58 mph from a station in the Chesapeake Bay between Gwynn Island and Exmore.

Richmond's peak gust was a modest but noticeable 30 mph.

The National Weather Service in Wakefield confirmed three tornadoes hit southeastern Virginia: two in Suffolk and another near Smithfield in Isle of Wight County.

Forecasters say Elsa's path will slice across north Florida and then move on to Georgia, the Carolinas and Virginia before heading out in the Atlantic Ocean by Friday. 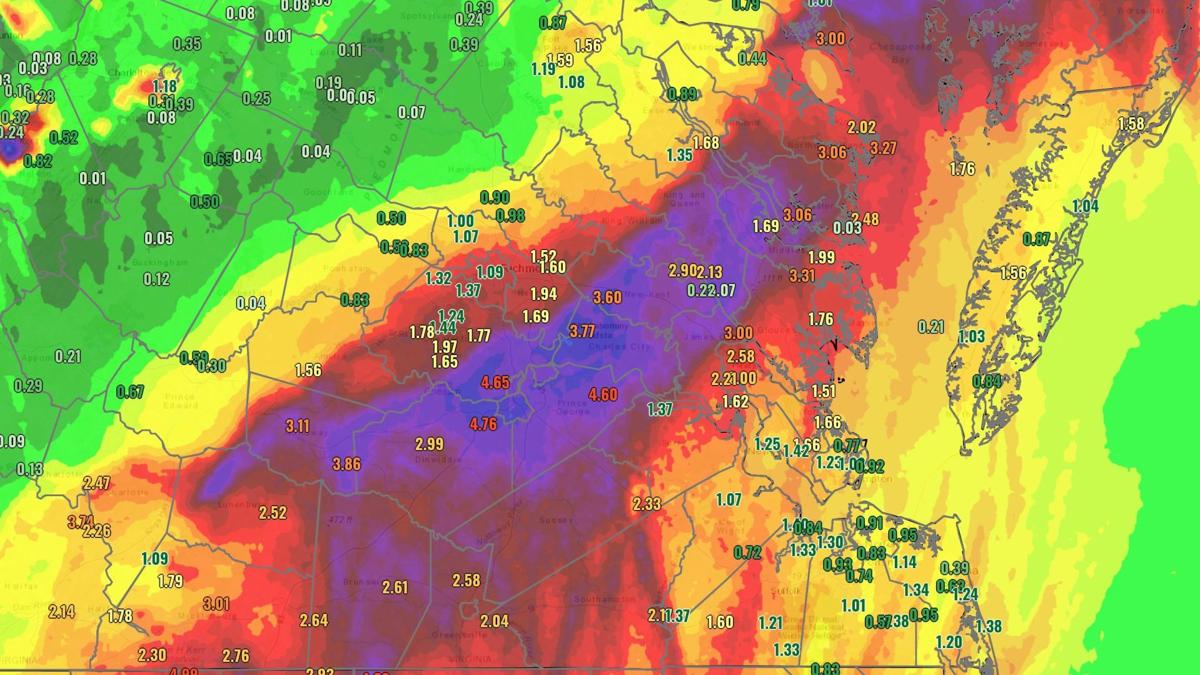 Preliminary radar-estimated rainfall (shading) and gauge reports (labels) across central Virginia for the 48 hours between Wednesday afternoon and Friday afternoon. The heaviest rain from Tropical Storm Elsa fell in a band just to the south and east of Richmond, with much lighter amounts to the north and west.