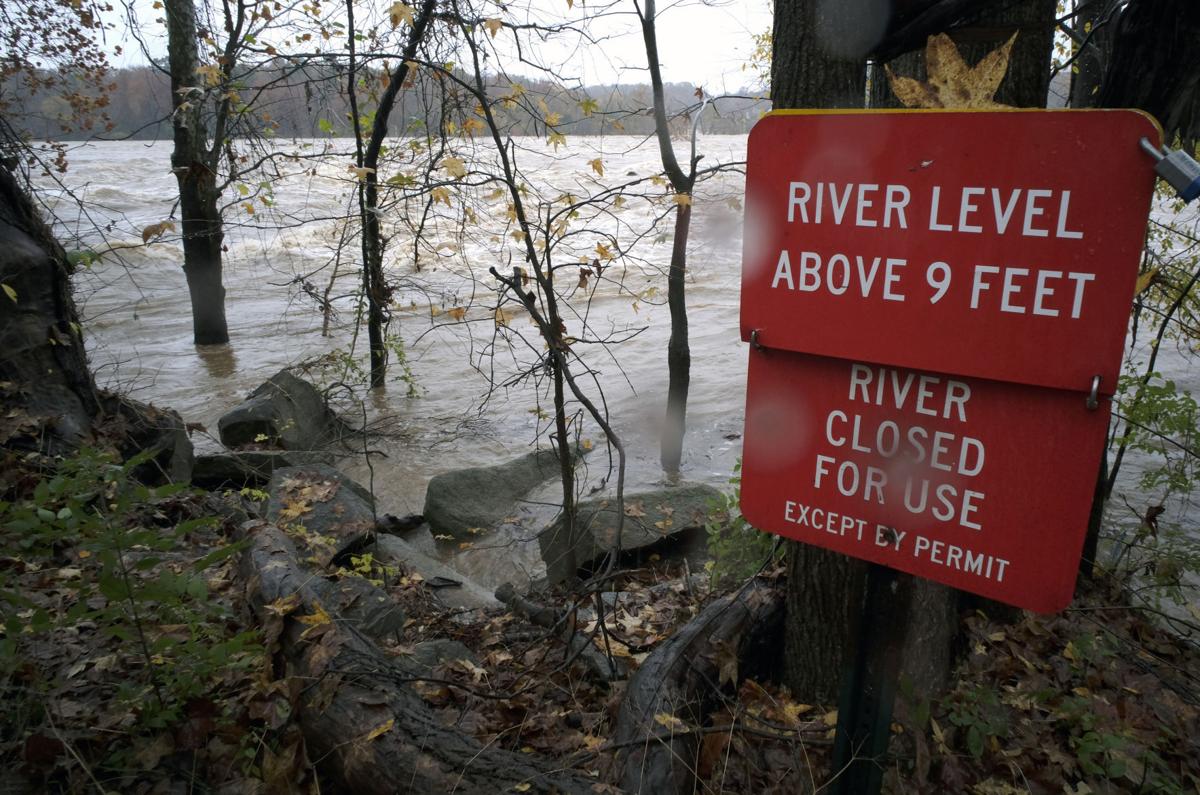 A warning sign was posted at the Pony Pasture along the James River along Riverside Drive in Richmond, VA Thursday, Nov. 12, 2020 as heavy rain covered the metro area. 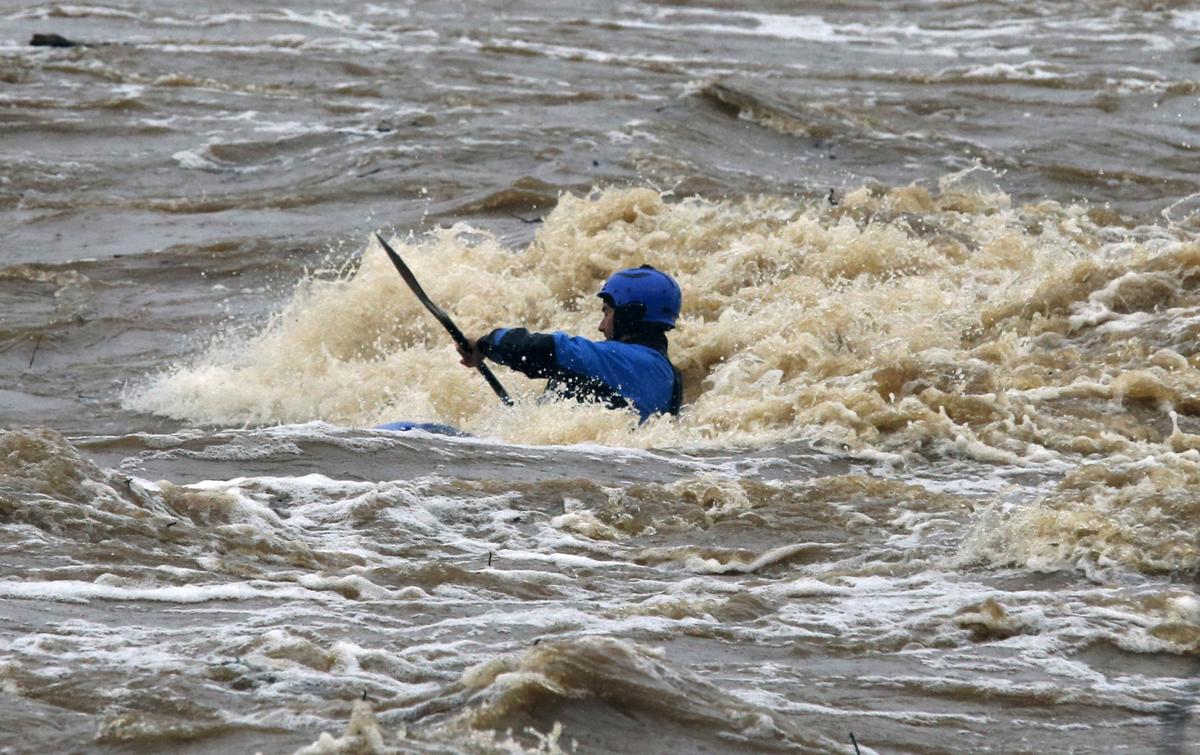 Tad Dennis navigates the current in the James River near the Pony Pasture along Riverside Drive in Richmond, VA Thursday, Nov. 12, 2020 as heavy rain covered the metro area. 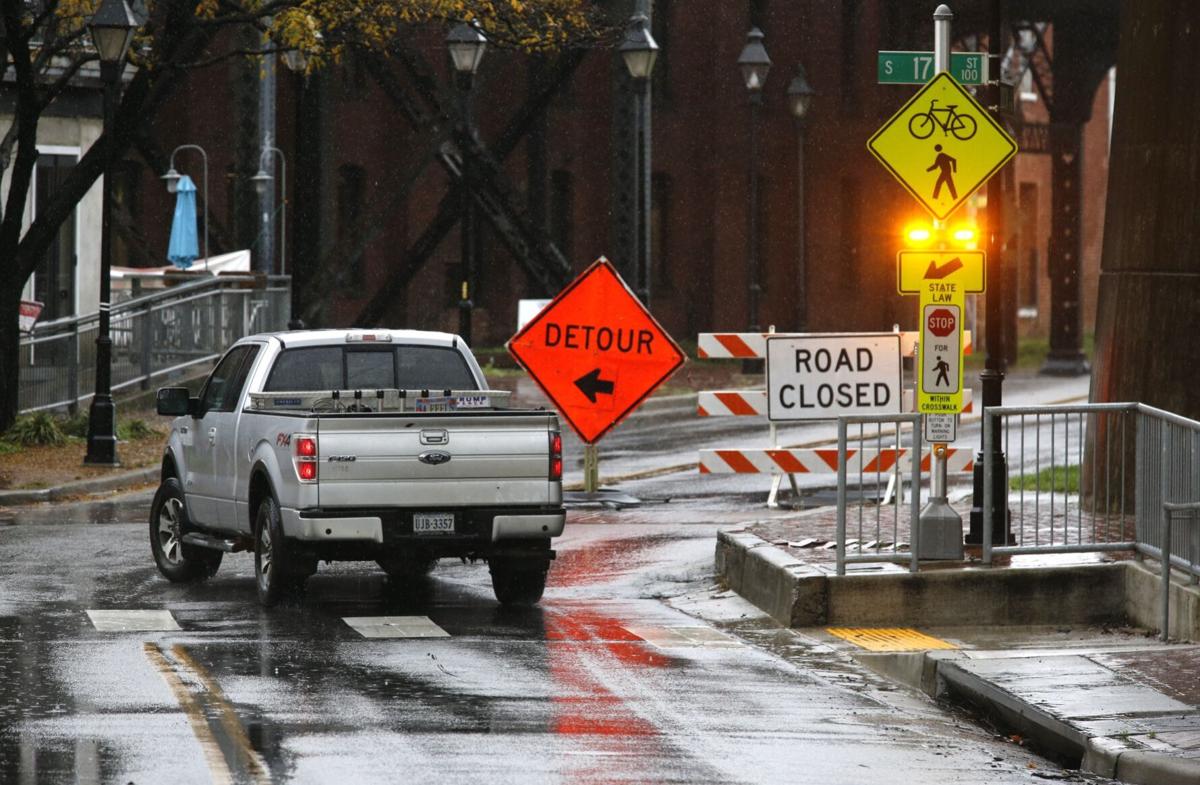 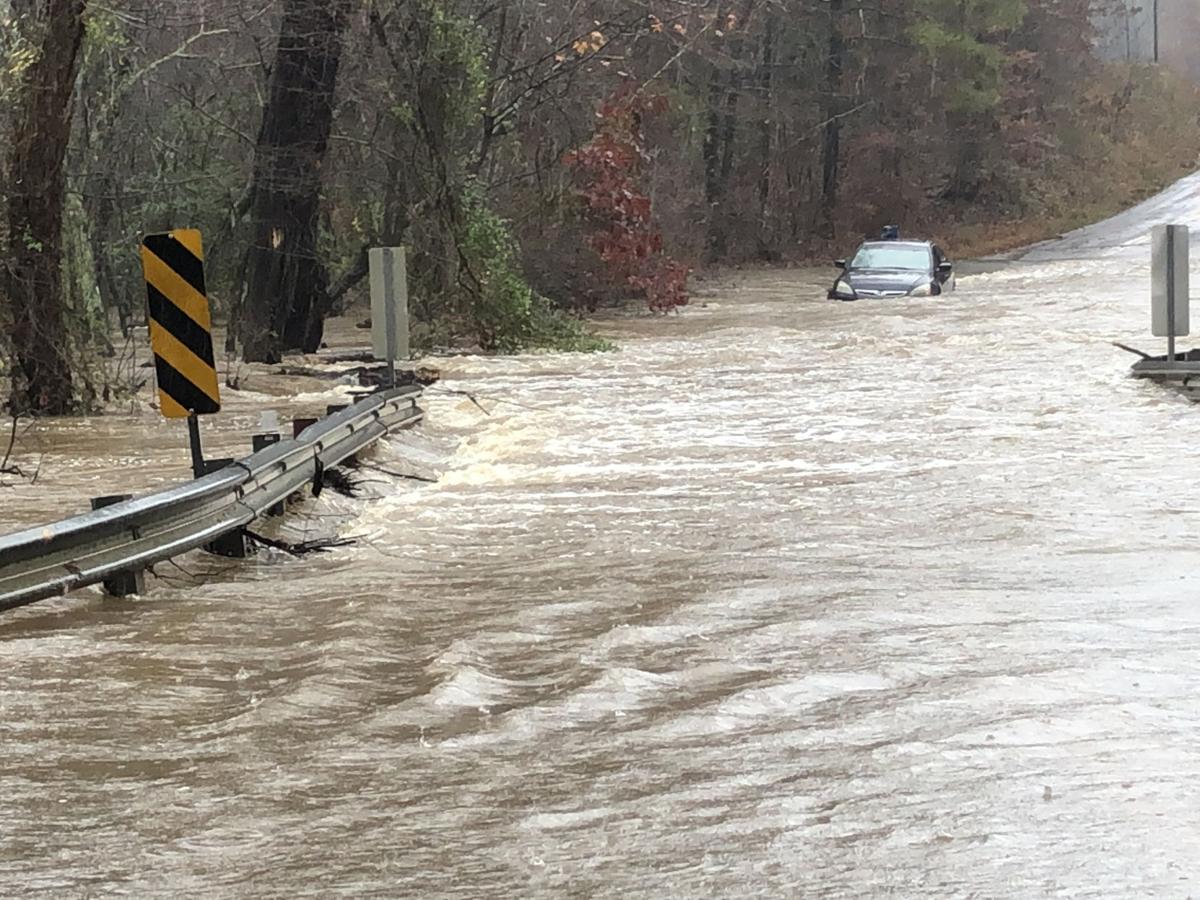 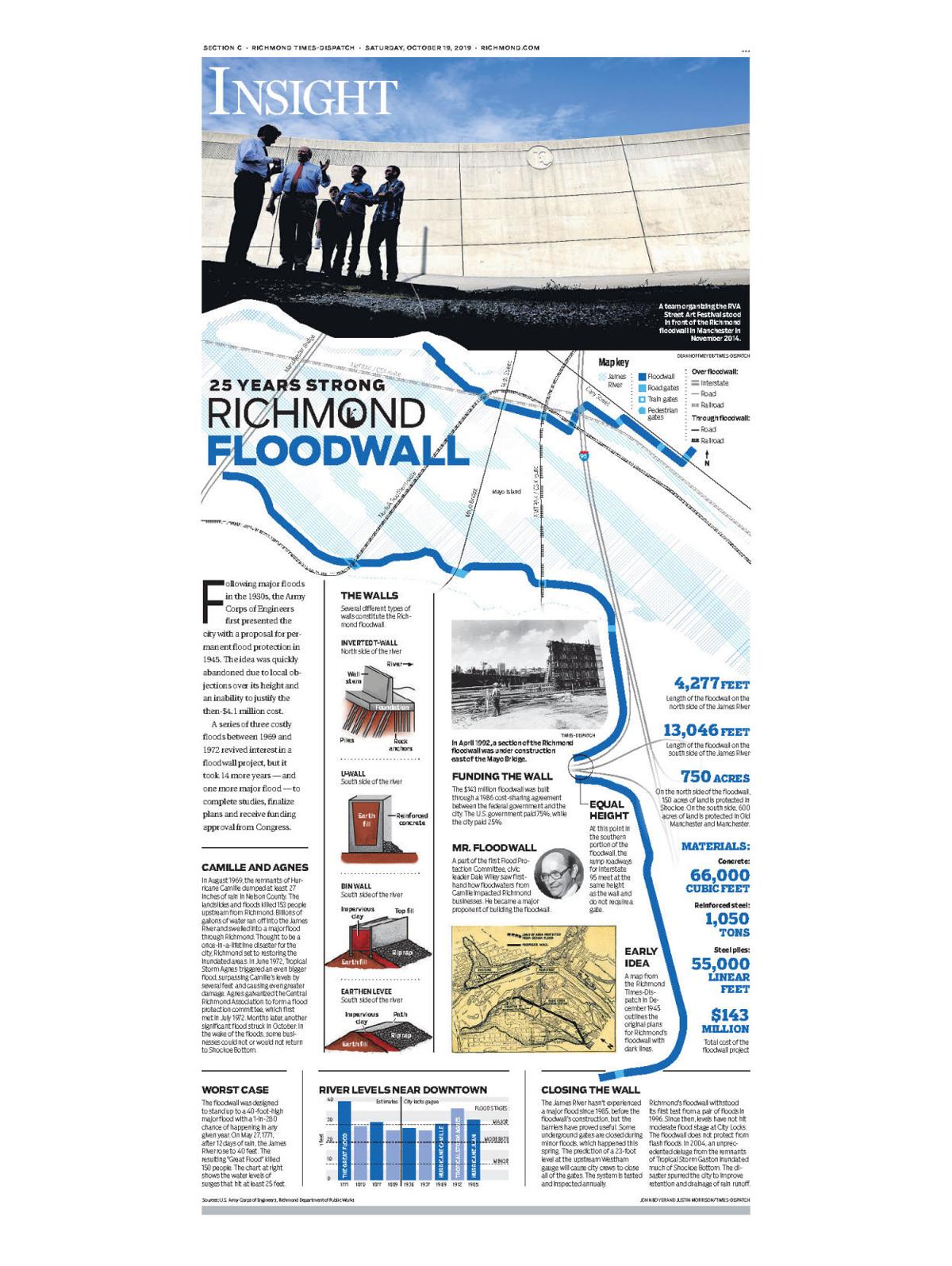 Saturday afternoon update: The James River is still flooded, but slowly coming down from a crest last night. Minor flood conditions will continue until Sunday afternoon.

• Impacts:  At 16 feet, the NWS advises: "Water reaches to the steps to the river in Huguenot Flatwater with water impacting the parking lot and covering the Huguenot Woods Trail." At 18.2 feet, the CSX railroad tracks near the gauge would experience flooding.

• Impacts: At that level, Dock Street is closed from 18th Street to E. Main Street according to the NWS. Parts of Riverside Drive also begin flooding at 14 feet.

A river flood warning is in effect until Sunday evening.

Little additional rain is in the forecast for the next week, only passing showers on Sunday.

These projections evolved as expected rainfall patterns and river levels in the upper James River basin were updated with new observations.

(Saturday morning forecasts from the NWS)

• Dan River: flooding will recede in Danville by Sunday, while a moderate crest is expected in South Boston early Sunday.

• Roanoke River: flooding will last through early Monday at Randolph.

• Appomattox River: a moderate crest is expected at Mattoax on Monday.

• Blackwater River: above Franklin, minor flood will crest late Saturday but take until the middle of next week to recede.

Parts of Richmond's floodwall are being "activated," meaning closed, as a precaution ahead of Friday's expected rise on the James River.

The Dock Street gate was closed at noon, according to the Department of Public Utilities. This blocks off Dock Street from 17th Street to 21st Street, and traffic will be detoured to Cary Street or Main Street via 21st Street.

The city plans to shut the Brander Street gate at close of business today, which would affect the entrance to Ancarrow's Landing and the wastewater treatment plant.

Portions of the James River Park System will be closed until further notice, according to Parks and Recreation.

• access will be limited at Texas Beach and the 42nd Street tower.

A bridge was washed out on Liberty Hill Road on Thursday in Statesville.

Some schools in the region are changing their schedules due to inclement weather.

A warning sign was posted at the Pony Pasture along the James River along Riverside Drive in Richmond, VA Thursday, Nov. 12, 2020 as heavy rain covered the metro area.

Tad Dennis navigates the current in the James River near the Pony Pasture along Riverside Drive in Richmond, VA Thursday, Nov. 12, 2020 as heavy rain covered the metro area. 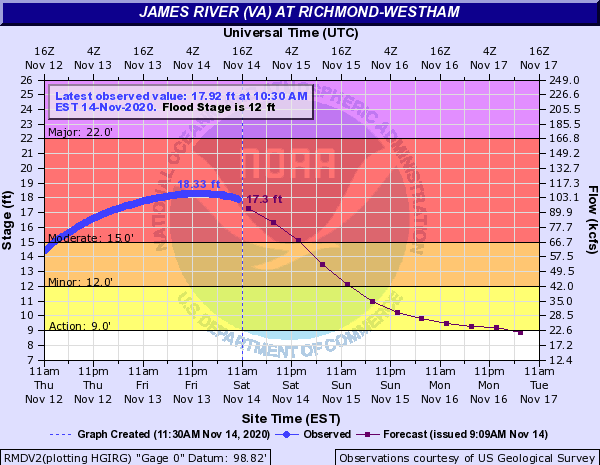 Forecast level for the James River at Richmond's Westham gauge, as of Saturday afternoon. 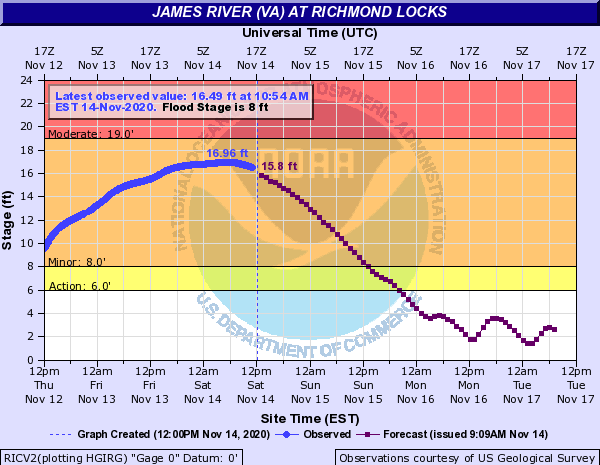 Forecast for the James River at Great Shiplock Park, as of Saturday afternoon. 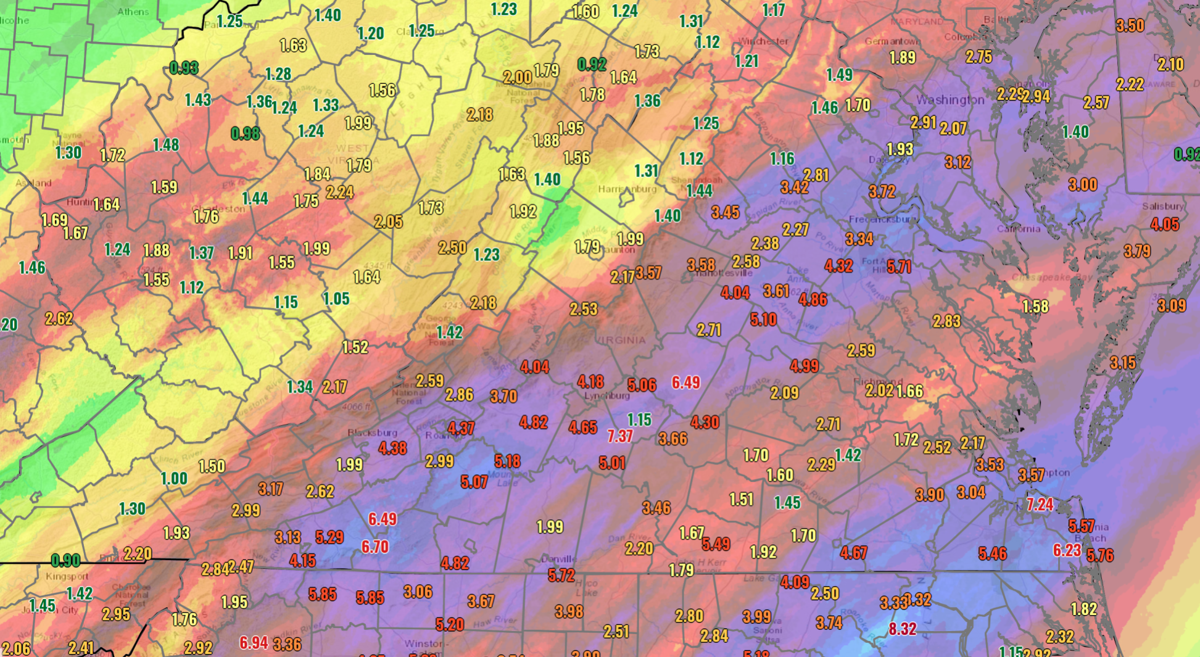 Storm totals across Virginia as of 8:15 p.m. Thursday.