The already-low snow chance for Richmond is trending even lower today.

After a brief wave of sleet and rain around daybreak, it's been a quiet and dry morning for the metro area with breaks of sunshine nudging temperatures to the upper 30s. The reason: drier, warmer and weaker trends surrounding a low pressure system that's moving off the North Carolina coast.

The rest of the day looks primarily dry around Richmond. Some light rain or flurries can't be ruled out later on, but anything steady or heavy is quite unlikely. The bulk of the precipitation – and chances for a dusting of snow – are going to miss us well to the southwest and south.

The odds of a disruptive snow accumulation are also lower for Southside Virginia as well, and the winter weather advisory for Lunenburg and Mecklenburg counties was canceled shortly after 10 a.m.

Elsewhere in the state, snow is falling west of U.S. Route 220 as of 11 a.m. That's had a minor to moderate impact on road conditions according to VDOT's 511 website. Scattered rain is falling in far southern and eastern regions. That activity will mostly taper by the evening.

Metro Richmond will find itself near the edge of a snowy system on Friday or Friday night.

Even if it misses us, it should be a close call. Snowy scenes and slick roads might appear not too far to the south and southwest of Chesterfield County.

And even if snow does show up around Richmond, it probably wouldn't feel like the classic storm. Instead, on-and-off showers will struggle against dry air, with bursts of flakes (or even sleet) switching to rain at times during the relative warmth of the day and not much to show for it on the ground.

Potentially, some flakes could appear just after daybreak at the earliest, though it probably wouldn't be steady or accumulating to start. Chances for rain or snow mix may improve toward the late afternoon and evening hours. At the very latest, flakes are possible until the early hours of Saturday morning. Otherwise, it will be dry and cloudy with colder temperatures hovering in the mid-to-upper 30s.

A high-end scenario would require a heavier band forming on the northwest side of the low pressure system as it glides off the North Carolina coast, perhaps aided by nightfall's cooler temperatures. If so, a quick 1 to 2 inch blanket could appear sometime in the evening and leave problems for Saturday morning's drivers. But from the looks of most of Thursday's computer models, south-central Virginia is more prone to that kind of threat.

To prepare for the possibility of slick roads, crews from the Virginia Department of Transportation began treating high-volume routes in the southern portions of the Richmond district with saltwater brine on Thursday, and plan to monitor conditions through Friday and Saturday morning.

Areas farther west along the Virginia-North Carolina border stand the greatest chance for a wintry mess.

The National Weather Service posted a winter storm warning for the areas surrounding Galax and Bristol, along with most of western North Carolina. That's where snow will arrive first on Friday morning, and where amounts are expected to range 3 to 6 inches by Friday night.

Surrounding that zone, winter weather advisories also stretched westward to Norton and the Cumberland Gap, north to Marion, Wytheville and Rocky Mount, and eastward through Martinsville, Danville, South Boston and South Hill. For those areas, at least 1 inch of snow is a realistic possibility during the day. For Lunenburg and Mecklenburg counties, the advisory was set to begin at 4 a.m.

Amounts are most uncertain farther to the north between Interstate 64 and the U.S. Route 460 corridor, including places like Richmond, Petersburg, Farmville, Lynchburg and Roanoke. A coating of snow is possible if the moisture can make it northward, but not guaranteed. And east of Interstate 95 toward the Tidewater region, the main precipitation type looks like rain with some non-accumulating flakes still possible early Saturday.

Dry air is expected to dominate the northern tier of the state, keeping little more than clouds and stray flurries in the forecast. There's no area in the state where freezing rain looks like a big threat, however.

So this could be one of those less-common systems where most of the snow ends up missing Richmond to the south, rather than to the west or north.

Mostly sunny and dry weather will return for the entire state on Saturday and Sunday with the chilly temperatures typical for January.

Even if this snow chance does pass us by, there might be another central Virginia snow chance lurking in the vagaries of the weather pattern during the middle of next week.

Around the state, chances of 1 inch or more by Saturday morning: 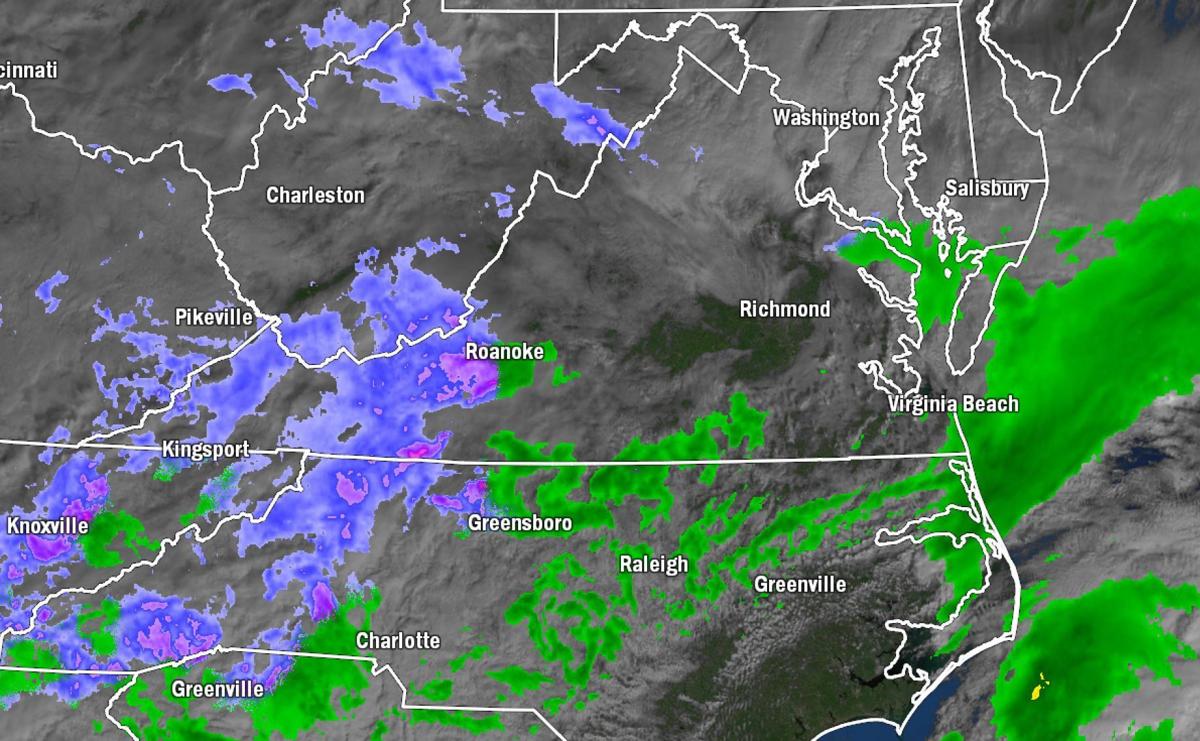 Regional satellite and radar view at 10:50 a.m., showing snow across southwestern Virginia, rain to the south and east of Richmond, with dry weather and partial clearing over central Virginia. 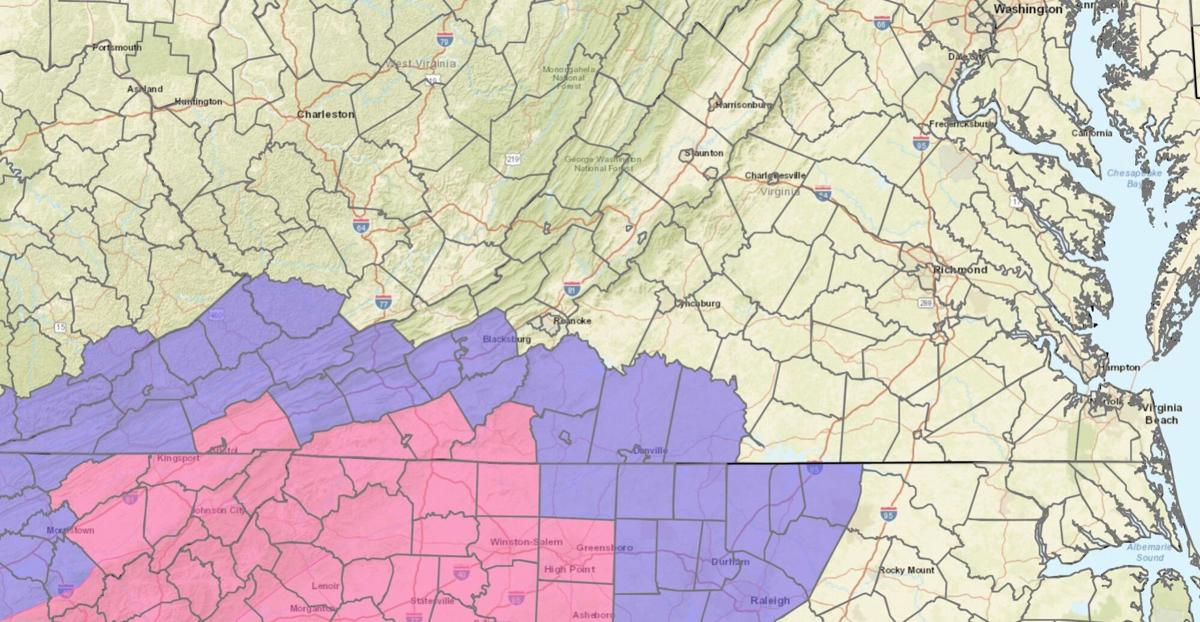 Computer model simulation for rain (green) and snow (blue) across the Southeast U.S. on Friday, Jan. 8. Exact timing and details will vary, but this provides a good big-picture view of the scenario.