Winter weather arrived with a bang in central Virginia, but our snow season ended up fizzling away.

Now, we’re looking forward to gardens and baseball games as spring takes hold, not fretting about plows and 2-hour delays.

Still, our coverage of the changing seasons wouldn’t be complete without a look back at the snow that was.

Are we done with snow now?

Our forecast for the remainder of March keeps snow and ice out of the picture.

Near-freezing temperatures will return on the heels of Monday night’s rain, but they won’t overlap and result in flakes.

April snow certainly isn’t unheard of in Richmond, but it isn’t to be expected either.

Historically, measurable April snow in Richmond (not just flurries in the air, but actual slush on the ground) averages out to a once-per-decade occurrence.

Our most recent example was April 7, 2007, when we picked up about an inch the day before Easter.

Last year, some snow brushed just off to our northwest on April 9.

For an actual snowstorm in the metro area, we’d be scanning the horizon for signs of a big dip in the jet stream over the eastern U.S. and an intrusion of wintry cold temperatures from Canada.

But we’re more likely to see a ridge set up over the southeast in early April and experience a period of near-normal or above-normal temperatures. That pretty much rules out a final hurrah for snow lovers.

The mountains of Virginia, especially the western-facing slopes near West Virginia, aren’t quite out of the woods yet.

After all, some ridgetops still have a fresh coating of white from Thursday’s sneaky snow.

Once again, it was a season of contradictions for central Virginia: a blockbuster storm right out of the gate in early December, followed by minimal snow activity in the heart of winter itself.

We had fewer snowy days than we usually see — just four — but seasonal totals were boosted by that one big storm.

Officially, we saw 13.1 inches of snow, according to the National Weather Service in Wakefield.

That was about 3 inches above normal, and just slightly more than our previous winter.

Here’s the breakdown of events:

Who saw the most snow?

It’s been a close competition for the title of Virginia’s snow capital.

A precipitation observer near Winchester reported 36.7 inches since the fall.

Not far behind was 35.2 inches from another snow watcher near Covington.

A late system might add to someone’s tally, so the race isn’t quite over.

The unpopulated ridgetops surely had more, but if a flake falls in the forest and no one is around to report it, does it count?

Fortunately for us, the National Weather Service keeps track of it by combining a variety of data sources into a smooth nationwide snowfall analysis.

That shows some 45-inch-plus seasonal totals in parts of Highland County where there isn’t a weather station.

Who had the least snow?

The lowest seasonal total in Virginia — for a weather station with complete data — was just 0.1 inches in Norfolk.

That coating came early on Dec. 5, but there were more traces of flakes in December and January.

Off to the south, the region stretching from Suffolk to Virginia Beach reported only traces.

How did it stack up to normal?

Some parts of the state had more snow than usual, but some were deficient.

Southside Virginia dealt with the most snow relative to normal, also a consequence of the Dec. 9 storm.

By and large, a near-normal amount of snow fell across Northern Virginia and down the Interstate 81 corridor.

Snow was deficient for Tidewater and the region west of Wytheville.

Both the far southwestern and far southeastern corners of the state had less than 25 percent of normal snowfall.

Altogether, it shows why “is this going to be a bad winter?” is an awfully hard question to answer in these parts.

Check Richmond.com/weather for John Boyer’s videos and forecast updates. Contact him at JBoyer@timesdispatch.com.

The 2020 hurricane season was extremely busy for the Atlantic, and for Virginia. Here's who saw the most wind and rain.

Saturday afternoon update: The James River is still flooded, but slowly coming down from a crest last night. Minor flood conditions will conti…

The forecast is calling for cold temperatures in Richmond Wednesday. It should reach a cool 47 degrees. We'll see a low temperature of 28 degr… 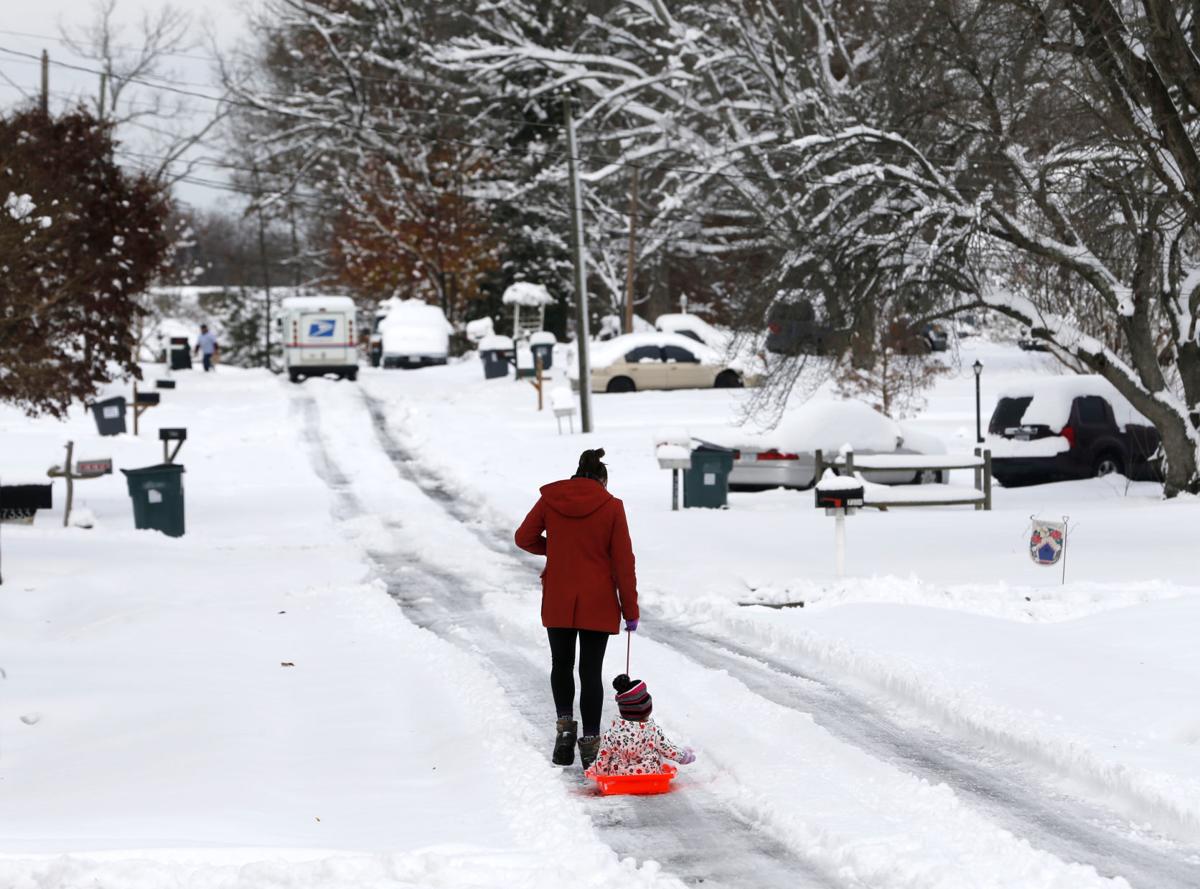 A mother pulls her daughter in her little orange sled along a frozen track in the snow on Lee Ave. in Mechanicsville on Monday, December 10, 2018. 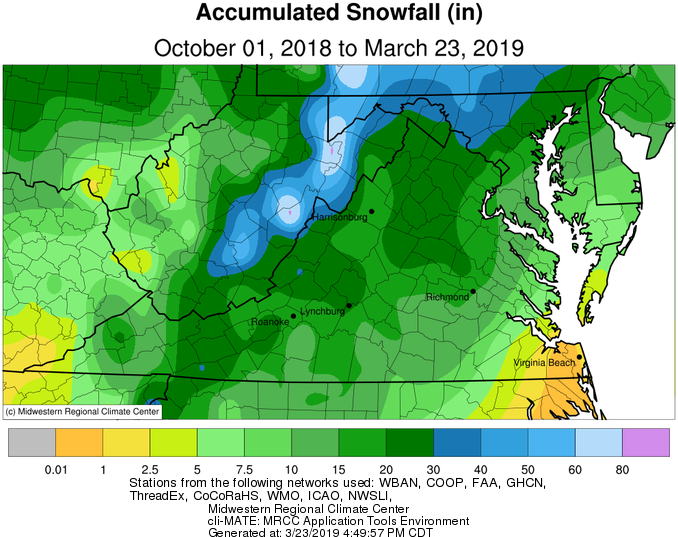 Accumulated snowfall for the 2018-19 winter season across Virginia is seen on a map that was created by interpolating observations from different weather stations. 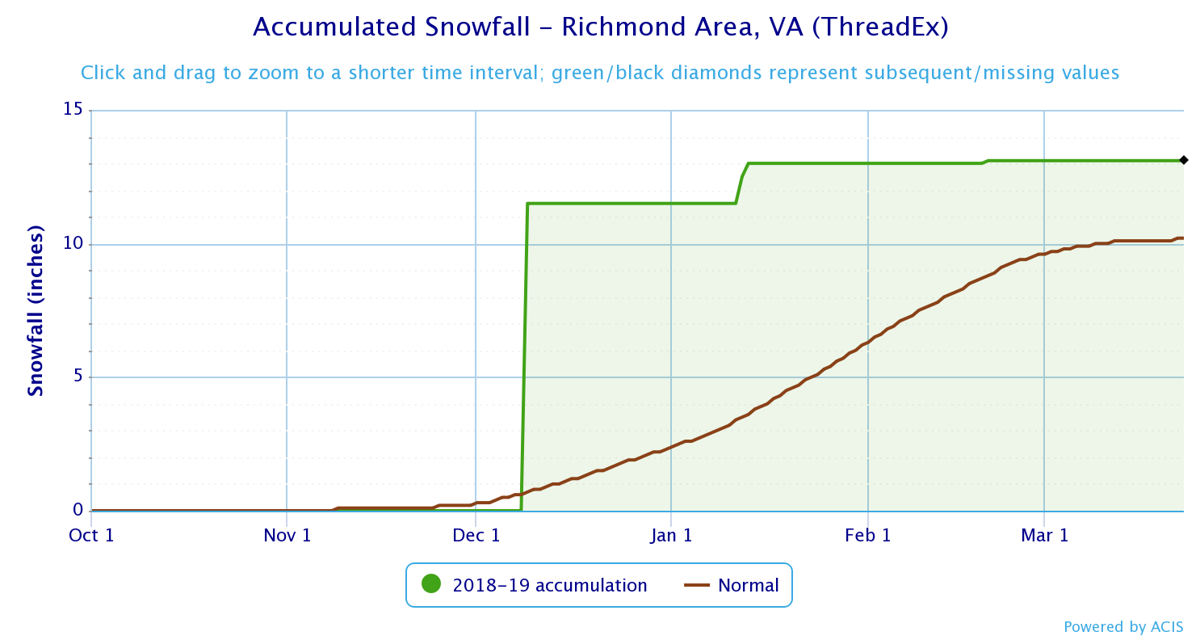 From left to right, accumulated seasonal snowfall in Richmond during the 2018-2019 season (green), versus normal (brown).