The first day of summer 2022 brought soaring temperatures across a large part of the United States. National Weather Service

A heat dome occurs when a persistent region of high pressure traps heat over an area. The heat dome can stretch over several states and linger for days to weeks, leaving the people, crops and animals below to suffer through stagnant, hot air that can feel like an oven.

Typically, heat domes are tied to the behavior of the jet stream, a band of fast winds high in the atmosphere that generally runs west to east.

Normally, the jet stream has a wavelike pattern, meandering north and then south and then north again. When these meanders in the jet stream become bigger, they move slower and can become stationary. That’s when heat domes can occur.

When the jet stream swings far to the north, air piles up and sinks. The air warms as it sinks, and the sinking air also keeps skies clear since it lowers humidity. That allows the sun to create hotter and hotter conditions near the ground.

If the air near the ground passes over mountains and descends, it can warm even more. This downslope warming played a large role in the extremely hot temperatures in the Pacific Northwest during a heat dome event in 2021, when Washington set a state record with 120 degrees Fahrenheit (49 Celsius), and temperatures reached 121 F in British Columbia in Canada, surpassing the previous Canadian record by 8 degrees F (4 C). 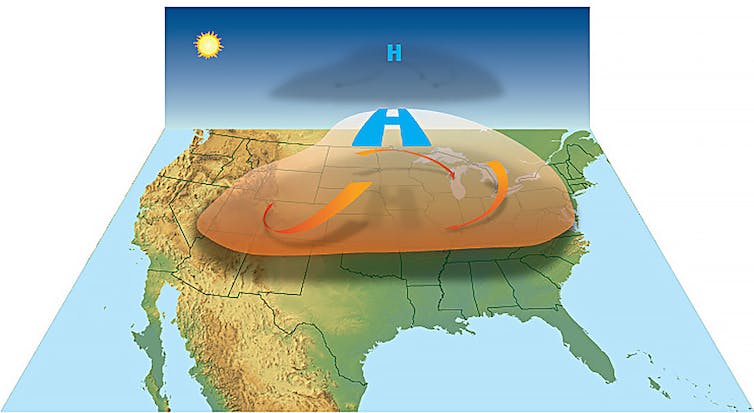 Heat domes involve high-pressure areas that trap and heat up the air below. NOAA

Heat domes normally persist for several days in any one location, but they can last longer. They can also move, influencing neighboring areas over a week or two. The heat dome involved in the June 2022 U.S. heat wave crept eastward over time.

On rare occasions, the heat dome can be more persistent. That happened in the southern Plains in 1980, when as many as 10,000 people died during weeks of high summer heat. It also happened over much of the United States during the Dust Bowl years of the 1930s.

A heat dome can have serious impacts on people, because the stagnant weather pattern that allows it to exist usually results in weak winds and an increase in humidity. Both factors make the heat feel worse — and become more dangerous — because the human body is not cooled as much by sweating.

The heat index, a combination of heat and humidity, is often used to convey this danger by indicating what the temperature will feel like to most people. The high humidity also reduces the amount of cooling at night. Warm nights can leave people without air conditioners unable to cool off, which increases the risk of heat illnesses and deaths. With global warming, temperatures are already higher, too.

One of the worst recent examples of the impacts from a heat dome with high temperatures and humidity in the U.S. occurred in the summer of 1995, when an estimated 739 people died in the Chicago area over five days.

How to stay cool without air conditioning

Tips for staying safe in the heat this summer

Take a cold shower or bath

Use cold washrags on your neck or wrists

Close your curtains or blinds

Sleep in the basement

Close the doors of unused rooms

Use the exhaust fan in your kitchen and/or bathroom

Cook in the morning, with a slow cooker or outside

Research what your state offers

Weekend weather: What summer in Virginia is known for

The weather this weekend in Richmond will be everything you’ve come to expect if you’ve lived here a long time. Hot and humid afternoons will …

2022: Halfway done and warmer than normal

Children played in the James River to escape the heat June 17. Richmond is tied for its 14th-warmest year on record so far.

Why June seemed cooler than it was

Heat and humidity have returned to Virginia and, for the next couple of days, there will not be a dramatic change in conditions.

50 years later: Is Richmond and its floodwall ready for another Agnes?

As part of the Water Resources Development Act of 1986, the Richmond Floodwall was born. At a total cost of $143 million, it was built under a provision that allowed the cost to be shared between the City of Richmond and the Norfolk District of the Army Corps of Engineers.

As heat and humidity build for this coming weekend, Richmond will be true to its summer climatology: hot and humid with a small chance of afte…

Listen to Across the Sky podcast; episode 12 coming soon!

🎧 The Lee Weather Team talks about the biggest myths about tornadoes.

A bit hot this weekend, but Richmond has been far hotter

The apex of summer is coming. Afternoon temperatures will return to the 90s on Thursday, finishing the month the same way it started — hot.

A break in humidity on Tuesday, but hot and muggy this weekend

Enjoy Tuesday. Compared to the increasingly humid weather ahead of the Independence Day holiday weekend, Tuesday will feel like an early summer gift.