If it seemed to you like we just had an especially stifling summer here in Richmond — a notch above the usual muggy season — here’s the proof.

Last week’s recap of our summer weather promised follow-ups about what was going on with our downpours, heat index and humidity. Here, we’ll tackle the latter.

Based on average temperature, this summer was quite warm but a step down from 2020. Highs never even got above 96 degrees.

Yet on the whole, it was our muggiest summer since 2005 and we experienced one of our stickiest summer days ever.

Humidity seems like it should be pretty straightforward to talk about: It’s comfortable, or it’s not.

Or better/worse than the day before.

But things can get complicated when you try to put an entire summer into perspective, and whittle multiple spreadsheets down into one good graph.

This one is a bit of a mess. But that’s partly the point.

And to help the squiggles make sense, we’ll start with just one day.

Think back nearly one month ago to Aug. 18.

The main weather story on that Wednesday was the chance of tornadoes and recurring flash flooding as the remnants of Tropical Storm Fred trudged northward through the Appalachians.

Luckily, no disaster materialized in central Virginia that day.

But something extraordinary was still going on with that tropical air.

It was muggy. Very muggy.

The dew point (shown in the green line) was all the way up at 80 degrees at one point on Aug. 18.

That was the highest hourly dew point observation at Richmond International Airport since 2011. And in the past several decades of weather records at that site, only a few hours ever managed to go higher than that.

Why does that matter?

We get a clue by revisiting what dew point means.

When the temperature and dew point are the same, usually by way of the air cooling to the dew point, that’s when the air is saturated, relative humidity nears 100% and dew can form on surfaces, hence the name.

Warmer air has the potential to hold more water than cooler air. That’s why our heaviest downpours happen in summer rather than winter, and why a warming climate portends wetter storms.

In fact, a dew point of 80 also means there’s about twice the raw amount of water vapor in the air than the typical September day when it’s closer to 60.

Dew points in the lower 70s are quite common in Virginia summer, but upper 70s are about as high as they go. Lower 80s are rare (less so near the Chesapeake Bay).

So with that much moisture floating around on Aug. 18, a normal-sounding high of 87 degrees still managed to yield a heat index around 101.

What about the humidity?

That day also shows why relative humidity, while important, can’t tell us a complete story about comfort by itself.

On that Wednesday afternoon when the dew point was 80 and the temperature was 86, that worked out to a relative humidity of 82%.

But throughout that day, relative humidity ranged from 69% to 100% as the temperature changed.

Dew point, however, hovered in a narrower range of 75 to 80.

Lots of days have 82% relative humidity at some point.

What else is going on in that graph?

• Dew point (in green) changes more gradually than relative humidity (gray). Sharp rises and falls in dew point show a change in air mass, like the passage of a front.

• July had 414 hours of dew points in the 70s, but that was actually a bit lower than average duration.

• Overall, the mean dew point for the climatological summer was 69.7 degrees. In the past 70 years, only 2003 and 2005 ranked higher. (Here's where it gets technical: that result actually involves converting from another, more technical moisture parameter called mixing ratio, rather than a simple average of all the dew point values.)

Like temperatures, we can look at monthly or seasonal dew point averages to see change over time. And if it feels like it’s been getting muggier, you’re also right. More on that in an upcoming story.

UPDATE: Ida's worst weather has now cleared out of Va. after causing floods and at least two tornadoes

By any measure, this is a busy era for American hurricanes

It’s not unusual to have two or three tropical systems brewing in the Atlantic Ocean in mid-September. But it is noteworthy that we’re ready to hit the “O” storm — Odette — and may soon see “P” for Peter.

Ida, Henri, Irene and Fran show why some hurricanes give several days of heads up, and others don't

Hurricane Ida is the latest example of how the situation in the tropics can change rapidly this time of year.

What was up with Richmond's summer weather? Hotter nights, mostly.

For the third year in a row, Richmond’s summer ranked among the 10 warmest on record, albeit in a three-way tie for the tenth spot.

Severe thunderstorms with winds up to 70 miles per hour and hail up to an inch in diameter blew across southeastern Colorado on September 14th.

Ask the Weather Guys: Why do tornadoes happen in hurricanes?

When hurricanes make landfall, they can spawn tornadoes. 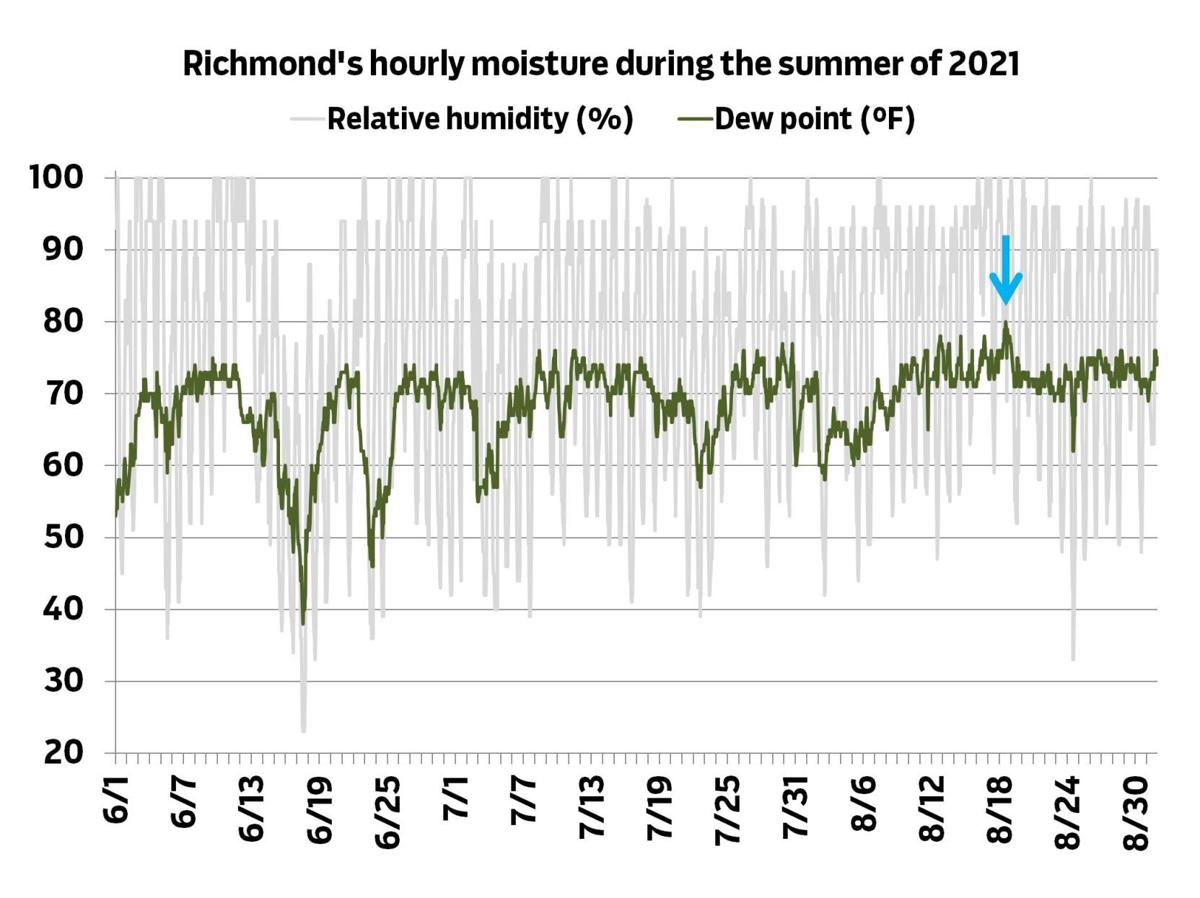 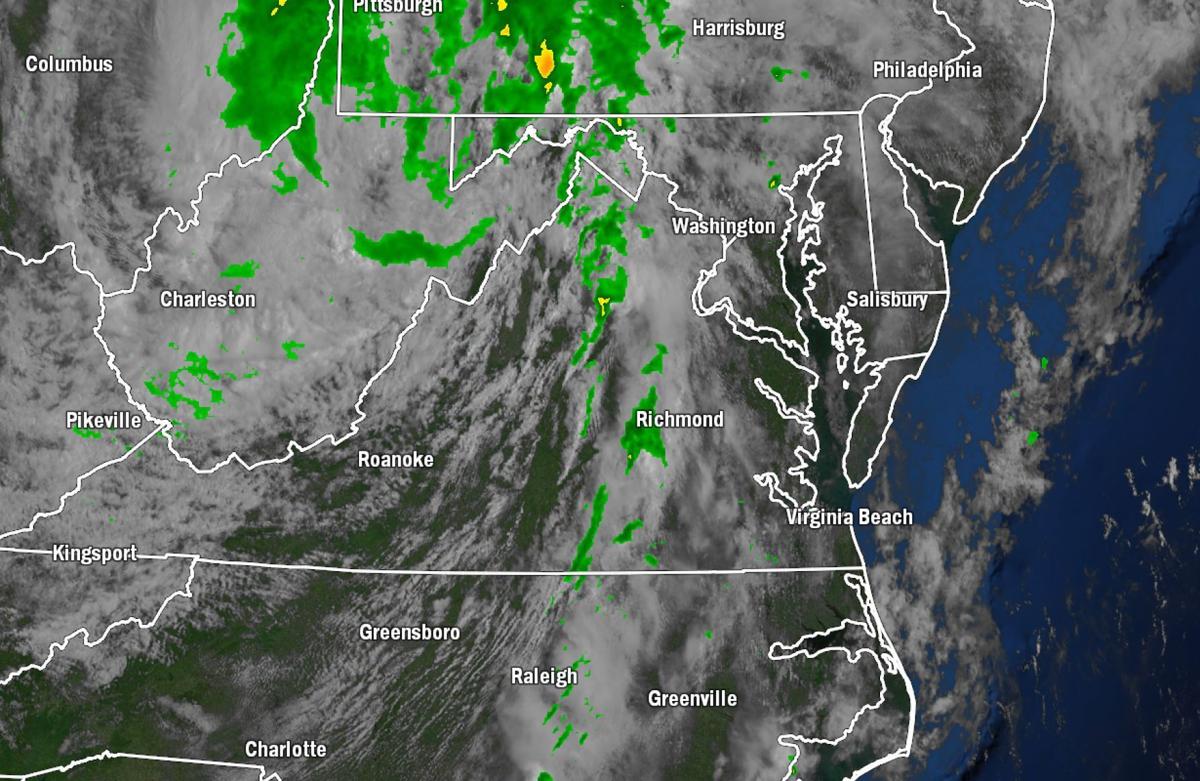 Satellite and radar composite of Fred's remnants bringing rain to portions of Virginia on Aug. 18, 2021.