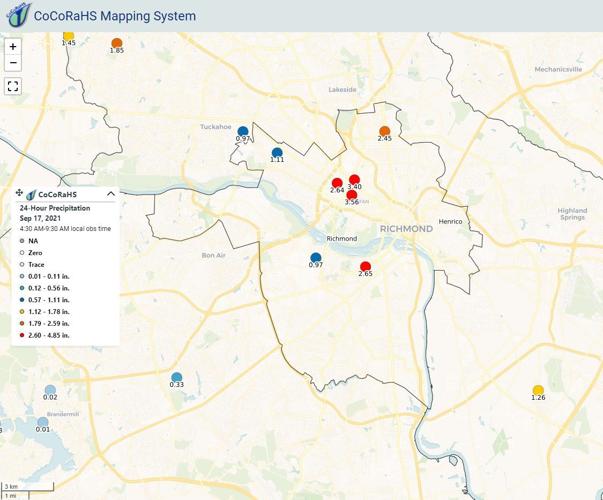 There was heavy rain around most of metro Richmond September 16, but with more than 3 inches of rain falling in just a couple of hours, the drainage systems in the Fan could not keep up. 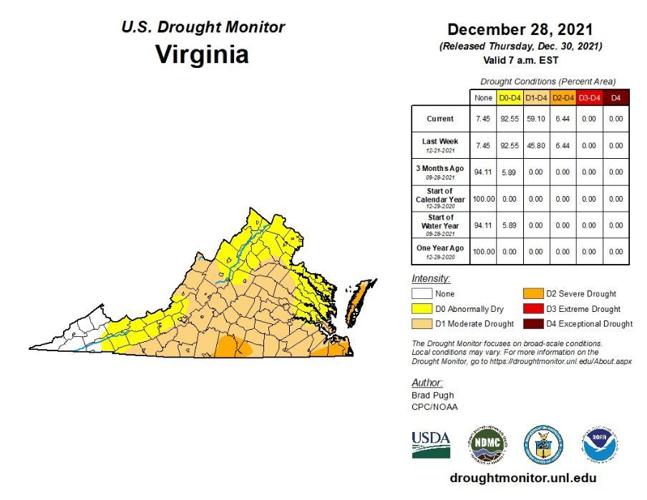 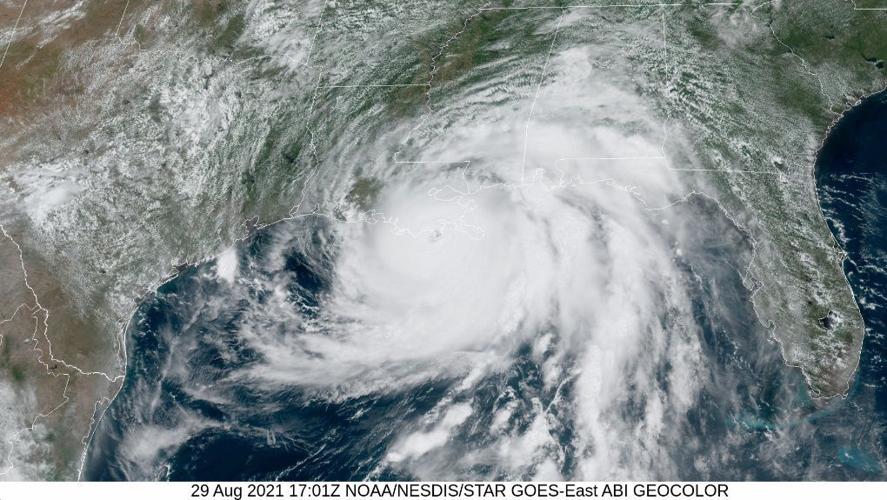 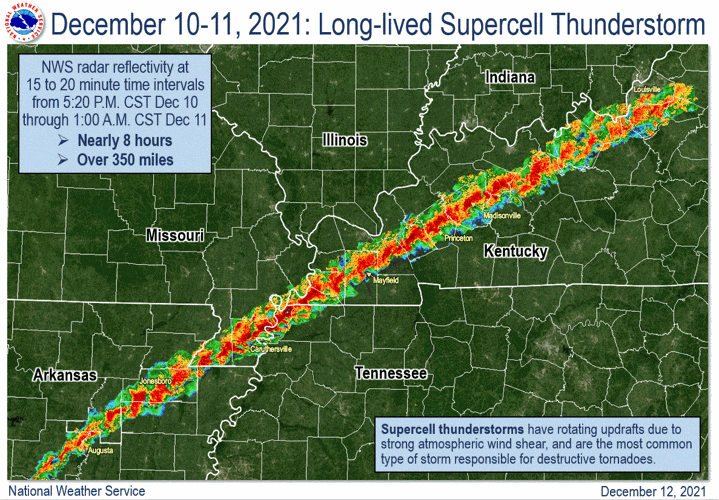 Radar track of the storm producing the EF4 tornado in Mayfield, Kentucky 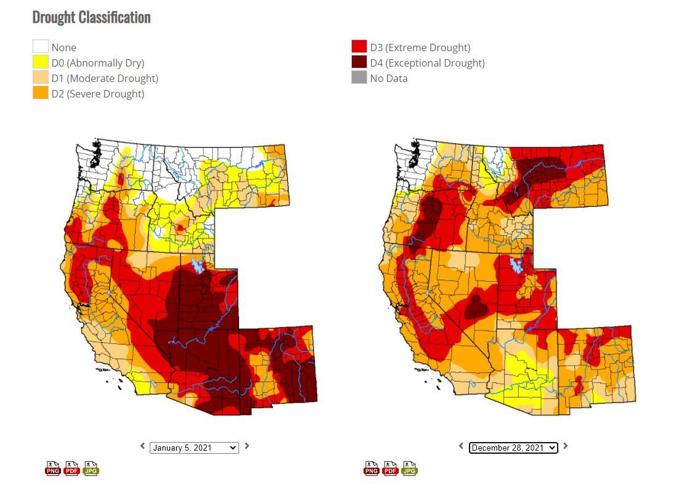 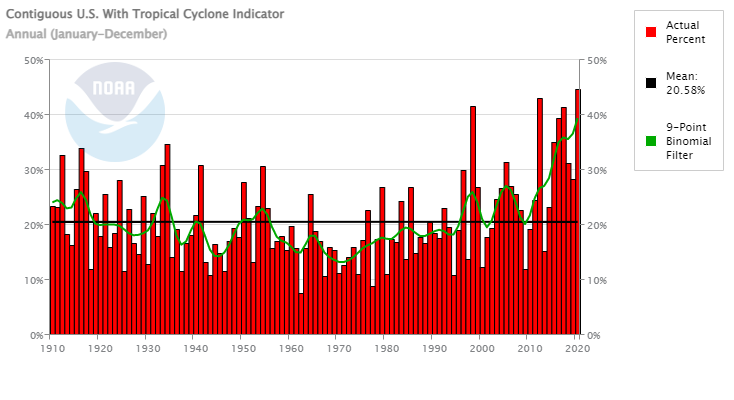 Using a combination of extremes in precipitation, drought, temperatures, and tropical weather, the number of extreme events in the U.S. is trending upward. 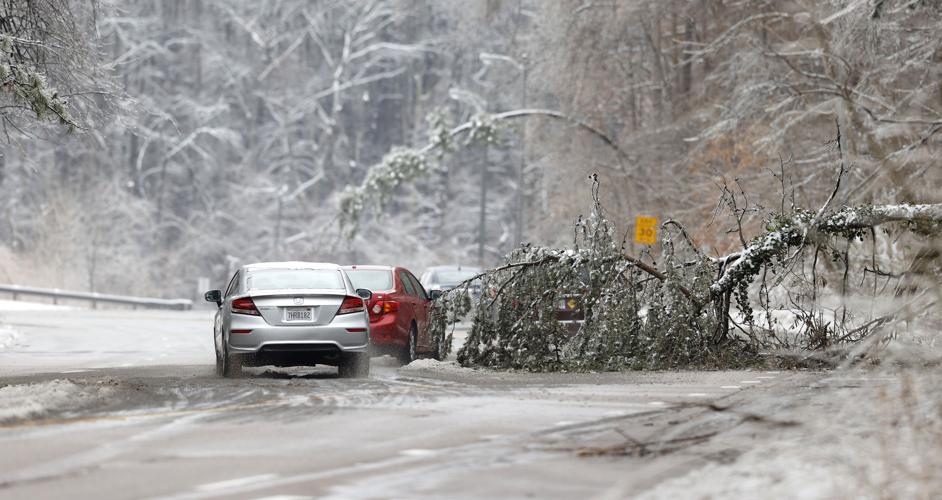 Richmond had its share of high-impact weather in 2021, but fortunately missed out on some of the bigger national weather headlines last year. Three local stories come to mind, each one taking a different amount of time to develop.

The first of these two ice storms came on Feb. 13, with one-quarter to one-half inch of glaze on many surfaces. As the stronger of the two systems, it knocked out power to nearly 300,000 Dominion Energy customers. Fortunately, the first storm was not followed by a brutal outbreak of cold, as temperatures climbed into the 50s a couple of days later.

But weather patterns can sometimes repeat and, in this case, it happened quickly. The storm that followed also brought ice, but there was far less of it, and it caused much less damage. The temperature dipped only to 30 degrees in the second storm, which kept the ice relatively wet and easy to melt. A few degrees lower and we’d be having a very different conversation.

Slow-moving rain deluged parts of Richmond on the afternoon of Sept. 16. The most intense came down between about 3 and 5 p.m. in the Fan, and the flooding that ensued forced the brief closure of Interstate 95 near Belvidere Street, triggered a water rescue on the Downtown Expressway near Harrison Street, and backed up about a foot of standing water at Harrison and Grace streets.

Through the end of March, Richmond had a modest surplus of rain for the year, with a wet February putting us in good shape going into the spring. But April turned dry, and drought started to creep in by the end of May. Normally that would be cause for concern going into the hotter summer months when soils dry out the fastest. But rainfall returned to normal in June; then the following four months were genuinely wet. July through October brought 25.20 inches of rain to Richmond, which is 50% above normal for that period.

Then after Halloween, it stopped. November is already Richmond’s climatologically driest month, but this November brought less than an inch of rain. Only recently has December made any real progress toward recovery, with the monthly total nudging over the 1-inch mark after some modest rain this past Wednesday night. This leaves Richmond in a moderate drought to finish 2021. And statewide, Virginia has not been this dry since the fall of 2019.

A surge of Arctic air poured southward across the Plains all the way to the Gulf Coast. Power failures in Texas grabbed headlines, as the power infrastructure was not prepared for the cold. At its worst on Feb. 16, Houston had a high of 25 degrees.

The normal low in Houston for that day is 48.

The magnitude of the heat wave in the Pacific Northwest at the end of June was unlike anyone now alive has ever seen. Several all-time high temperatures were shattered, over multiple days and by several degrees. Before 2021, Seattle had hit 100 degrees only three times in 126 years of record-keeping. In June last year, it was above 100 for three days in a row.

Crashing into the repeatedly battered Louisiana Gulf Coast on Aug. 29 as a Category 4 hurricane, it was one of only three hurricanes on record to make landfall in Louisiana with 150-plus mph winds. Hurricane Laura did the same in 2020, but before Laura, we have to go back to 1856 to find a storm similar in strength. New Orleans was just far enough east of landfall to avoid catastrophic impacts, but even there, power was out in many neighborhoods for almost a week.

The winds weakened as the storm traveled north into the U.S., and a few days later it interacted with an approaching system from the north, causing massive flash flooding in the Northeast. In a broad area between New York City and the northern suburbs of Philadelphia, 7 to 9 inches of rain fell within 24 hours.

Eight states reported tornadoes, and 61 tornadoes have been confirmed in that outbreak. Tornado outbreaks of this magnitude are rare, but especially so during December. The strongest of these tornadoes ripped across Mayfield, Ky. Rated as an EF-4, it had an estimated maximum wind speed of 190 mph and traveled an astonishing 165 miles.

This went on all year. Some places have gotten better in the past few weeks, as a cooler and wetter weather pattern has settled in parts of the West. Others have gotten worse. But the past few weeks notwithstanding, 2021 has led to record low levels in some reservoirs in the West. Last year, Lake Mead, which is formed by pooling Colorado River water in front of the Hoover Dam along the Arizona/Nevada state line, reached its lowest level since the dam was built and the lake started to fill in the 1930s.

While extreme events have always happened, it is important to realize that in a warming climate, extreme heat and precipitation events are more likely.

The climate change connection to cold waves and tornado outbreaks is much more tenuous.

Imagine a deck of 52 cards and the odds of dealing yourself a royal flush. Now replace all the 2’s with kings, all the 3’s with queens, and deal a few more times. The royal flush is still relatively rare, but now there is a much better chance that it will happen.

In a similar fashion to the Pacific Northwest heat wave, it still would have happened, but a warming climate very likely made it worse.

Closing the book on last year, Richmond quietly finished 2021 with one of its 10 warmest calendar years since consistent daily records began in 1897. Our 2021 average temperature will be near 60.3 degrees. The long-term average annual temperature in Richmond is about 58, and we have not had a year below that average since 2003.

But a return to more seasonable cold will kick off 2022. So whether you enjoy sweaters, fireplaces and snow; or shorts, beaches and warmth, may all your weather dreams come true in 2022!

There was heavy rain around most of metro Richmond September 16, but with more than 3 inches of rain falling in just a couple of hours, the drainage systems in the Fan could not keep up.

Radar track of the storm producing the EF4 tornado in Mayfield, Kentucky

Using a combination of extremes in precipitation, drought, temperatures, and tropical weather, the number of extreme events in the U.S. is trending upward.