Subscribe
Read Today's E-Edition
Share This
Youngkin names a new diversity officer for the state, orders a new focus for the office's work
0 Comments
Share this
1 of 5 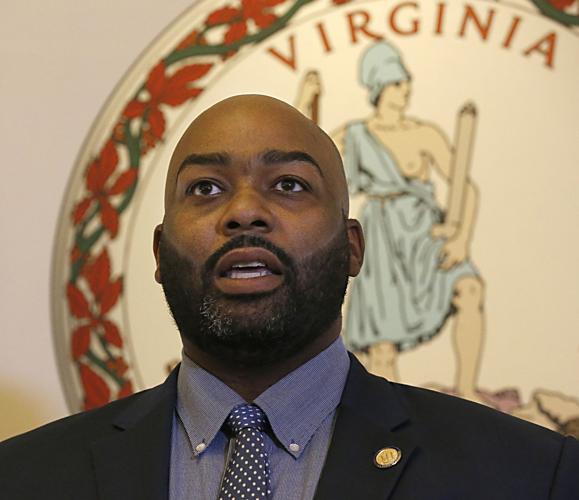 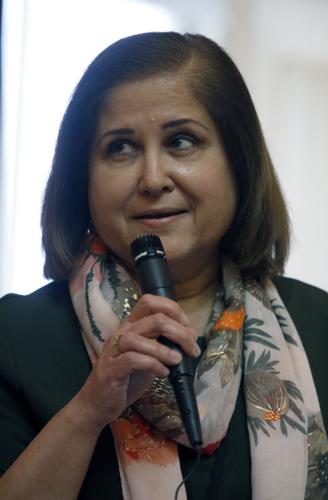 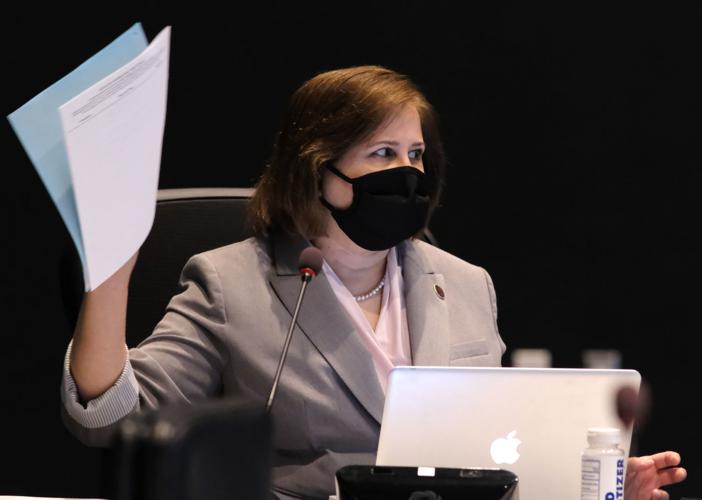 Sen. Ghazala Hashmi, D-Chesterfield, holds up the day’s calendar as she talks with a colleague dduring the floor session of the Senate seision inside the Science Museum in Richmond, VA Wednesday, Oct. 7, 2020. 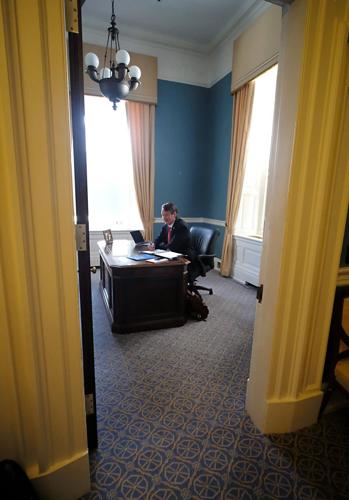 Gov. Glenn Youngkin, shown working in his office at the state Capitol, named Angela Sailor as his choice for director of diversity, equity and inclusion on Wednesday. Youngkin said Sailor’s title will be “chief diversity, opportunity and inclusion officer” and that he’ll back legislation to legally change the name of the office. 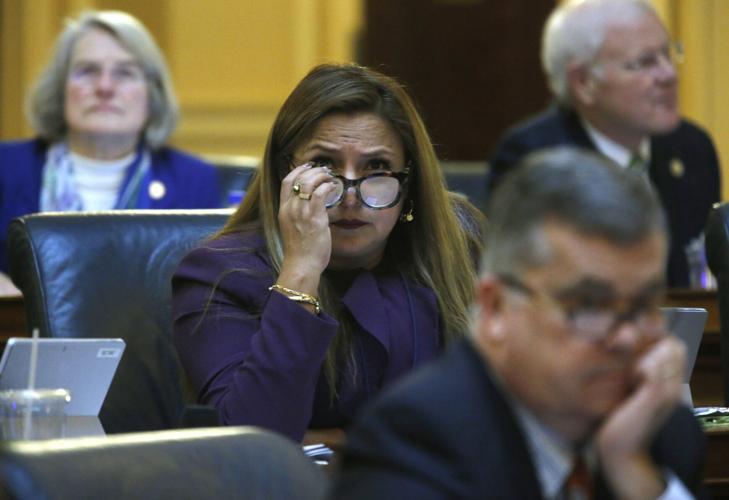 Del. Elizabeth Guzman, D-Prince William, lowers her glasses to look at the voting board during the floor session of the Virginia House of Delegates inside the State Capitol in Richmond, VA Thursday, Feb. 6, 2020. HB582, her bill allowing public employees access to collective bargaining, had just passed.

Gov. Glenn Youngkin on Wednesday named Angela Sailor, a policy expert at The Heritage Foundation who has criticized school lessons on systemic racism in the U.S., as the state’s new director of diversity, equity and inclusion.

As he named Sailor to the post, Youngkin also issued an executive order to refocus the office, tasking Sailor and her staff to work on economic opportunity, cooperation among religious groups, promoting “free speech and civil discourse” at colleges and universities, and ensuring that the state’s history curriculum is “honest, objective, and complete.”

According to the order, first reported by the Richmond Times-Dispatch, Sailor will also work on “eliminating disparities in prenatal care, and be an ambassador for unborn children.” Youngkin has said he opposes abortion. He supports exceptions in cases of rape, incest or when the mother’s life is in jeopardy.

The order offers a look at Youngkin’s plans for the state’s work on racial equity and inclusion. The Republican, who has said emphasis on disparities between white people and people of color is “divisive,” has quickly come under fire from Democratic leaders and liberal advocacy groups. They say his administration will roll back their work to address disparities — harming economic, health and educational opportunity for people of color.

In the executive order, the Youngkin administration says it acknowledges that “too many of our citizens have not received the equal opportunity they deserve,” and that “diversity when genuinely embraced strengthens our Commonwealth.” The executive order doesn’t mention race or any specific racial group.

Within the Cabinet, Sailor’s title will be “chief diversity, opportunity and inclusion officer,” swapping the word “equity” for “opportunity.” Youngkin said he will back legislation to legally change the title of the office.

Former Gov. Ralph Northam created the state’s Office of Diversity, Equity and Inclusion in 2019 in the aftermath of the blackface scandal that nearly ended his term. The office has been unstaffed since its former chief and her four staffers, who served at the will of the governor, were not asked to stay in their jobs.

The Youngkin administration attracted criticism over the weekend when it mothballed the office’s website, doing away with resources and reports on improving equity at the state’s agencies and public institutions. A Youngkin spokeswoman said the administration’s entire website was in the process of being rebuilt, and that the office’s work wasn’t specifically targeted.

Sailor, who is African American, will serve in Youngkin’s Cabinet and work with agency secretaries on the goals Youngkin laid out in his executive order. A new state law that went into effect last summer also tasks the office with overseeing the roll out of diversity, equity and inclusion plans at the state’s agencies.

Sailor worked in the White House Office of Public Liaison under President George W. Bush, after serving as the director of African American affairs for Bush’s presidential campaign. Sailor was also the deputy chief of staff for former U.S. Education Secretary Rod Paige. She also worked for the Republican National Committee on building coalitions.

Sailor is the vice president of the Heritage Foundation’s Feulner Institute, which according to its website, is working to “restore confidence in America’s founding values and principles.”

Throughout his campaign, Youngkin vowed to ban the teaching of “critical race theory” in Virginia schools, a term used by Republicans to refer to lessons on systemic racism. At campaign rallies, Youngkin’s promise attracted loud cheers from supporters, who said schools were overly emphasizing racism when teaching history, and depicting white people as “oppressors.”

In recent blog posts for The Heritage Foundation, Sailor said that lessons arguing that “America is systemically racist,” are “the textbook definition of racism.”

“No one would argue that children shouldn’t be thoroughly taught about the evils of racism, slavery, and segregation that happened in this country,” she wrote in July in a piece titled, “Schools Hiding Behind Diversity and Inclusion Rhetoric to Spew Critical Race Theory Vile.”

“But [critical race theory] ignores the hundreds of thousands of lives that were sacrificed during the Civil War to end slavery, the long struggle of the civil rights movement to end segregation and win equality, and the reality that the nation has made great progress.”

In a statement, Youngkin said that Sailor’s “experience in government, nonprofits and the private sector will guide us as we ensure that the government is working for all Virginians across our diverse Commonwealth, especially when it comes to economic opportunity for all Virginians.”

With the addition of Sailor, Youngkin’s Cabinet is made up of 11 men and five women; three of the Cabinet members are African American.

“I’m disappointed but not surprised that Governor Youngkin has decided to erase equity from the office,” Bagby said. “I keep hoping that they will turn their attention to actually solving problems but it’s evident that they are committed to dismantling the work that we have done to make our commonwealth more just and equitable.”

Bagby said that the removal of the agency’s website was “disgraceful.”

Sen. Ghazala Hashmi, D-Chesterfield, the first Muslim woman elected to the legislature, said Democrats have done a lot of work to “build that sense of inclusivity across the state agencies. I haven’t heard this administration talk about that.”

Hashmi, a community college official, also criticized the removal of the resources from the office of diversity, equity and inclusion’s website.

“It was a rich work coming from that website. I would hope they would provide information about where those resources are archived and how the public can access them,” she said.

“Ms. Sailor has worked for The Heritage Foundation, an organization that mobilizes conservatives and that seeks to dismiss the disparities that many people face in today’s society,” said Del. Elizabeth Guzman, D-Prince William.

“Exchanging the word ‘equity’ for ‘opportunity’ again dismisses the struggles of marginalized peoples who have not been granted the same opportunities due to systemic racism,” she said.

Guzman added: I’m also deeply concerned that the administration’s decision to frame prenatal care through the perspective of the fetus and not that of pregnant people signals a forthcoming attack on reproductive health care.

“I hope that Ms. Sailor will be an ambassador for women, particularly given the high maternal death rates among women of color.”

Also Wednesday, a key Senate panel advanced legislation that would make Sailor’s position that of a Cabinet secretary, increase the number of staff members that work in the office, and outlines duties for the secretary.

VCU will raise tuition 3% next fall, despite pleas from students and governor

Sen. Ghazala Hashmi, D-Chesterfield, holds up the day’s calendar as she talks with a colleague dduring the floor session of the Senate seision inside the Science Museum in Richmond, VA Wednesday, Oct. 7, 2020.

Gov. Glenn Youngkin, shown working in his office at the state Capitol, named Angela Sailor as his choice for director of diversity, equity and inclusion on Wednesday. Youngkin said Sailor’s title will be “chief diversity, opportunity and inclusion officer” and that he’ll back legislation to legally change the name of the office.

Del. Elizabeth Guzman, D-Prince William, lowers her glasses to look at the voting board during the floor session of the Virginia House of Delegates inside the State Capitol in Richmond, VA Thursday, Feb. 6, 2020. HB582, her bill allowing public employees access to collective bargaining, had just passed. 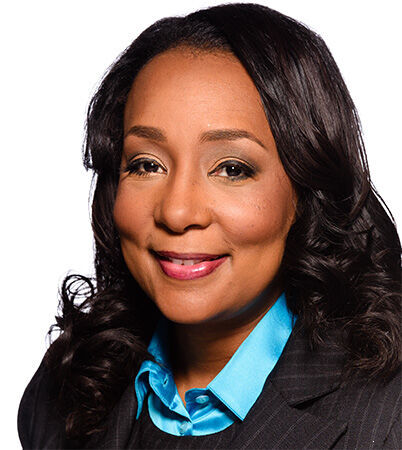 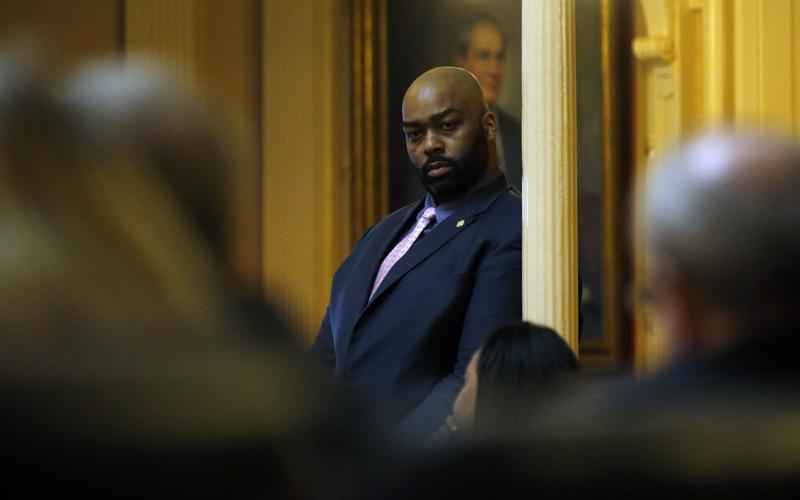 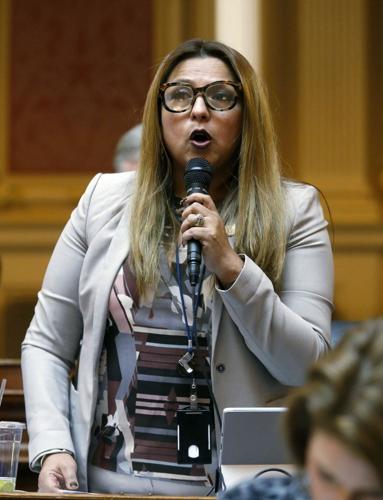