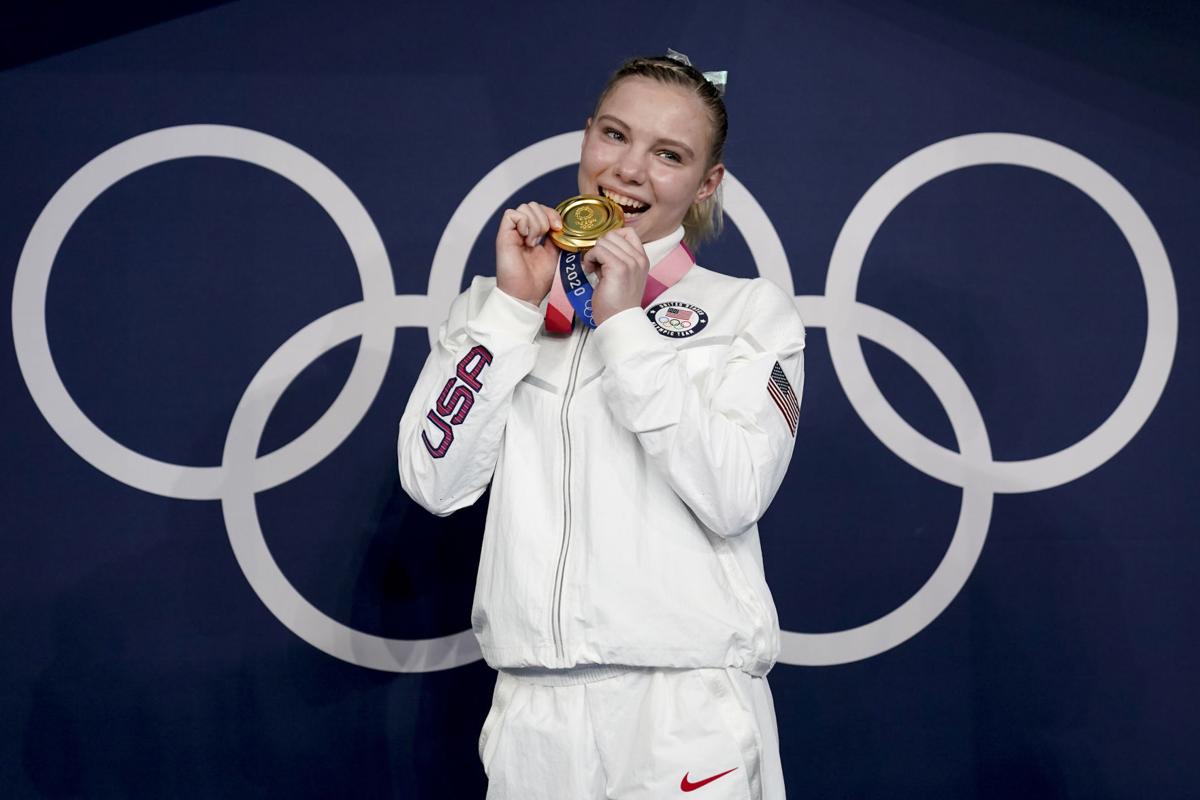 Jade Carey, of the United States, poses after winning the gold medal for the vault during the artistic gymnastics women’s apparatus final at the 2020 Summer Olympics, Monday, Aug. 2, 2021, in Tokyo, Japan. (AP Photo/Ashley Landis) 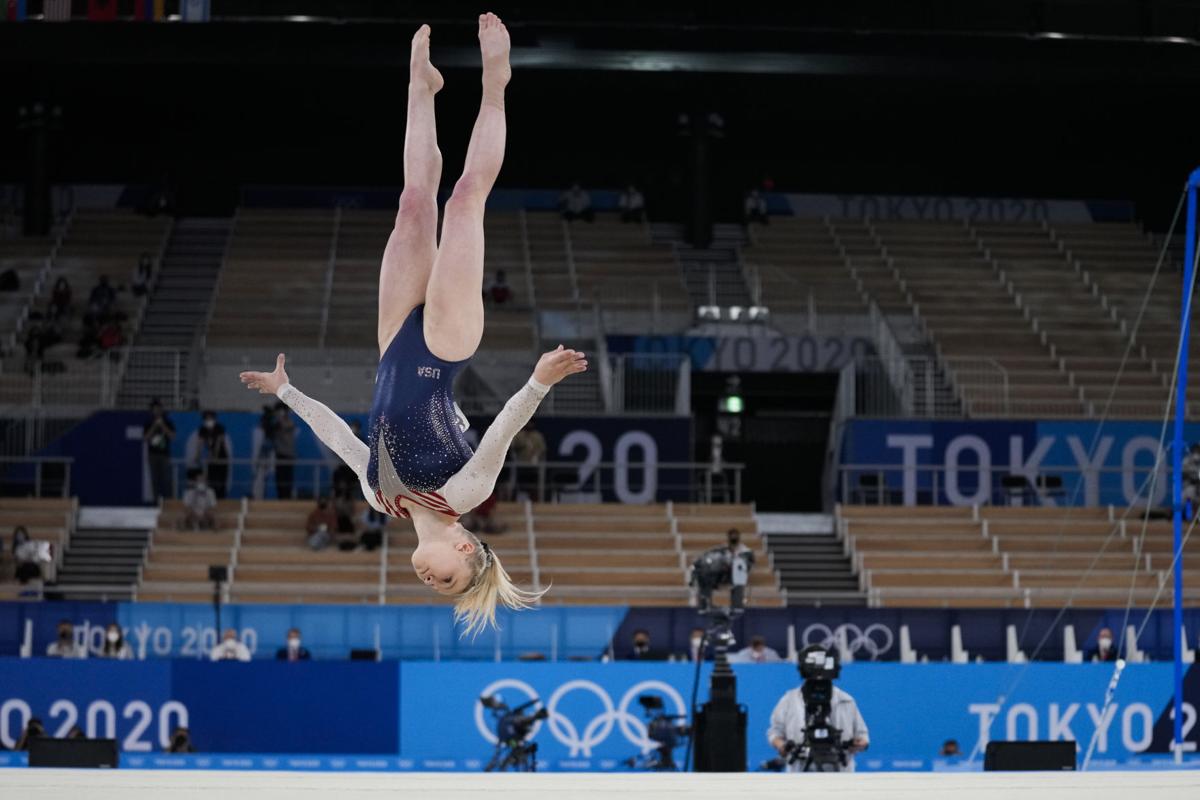 Jade Carey registered a score of 14.366 to win the floor exercise gold medal, the fifth medal of the Tokyo Olympics for the American women’s gymnastics team.

TOKYO — Jade Carey traveled the world for a spot in the Olympics. Germany. Qatar. Azerbaijan. Australia.

A lot of long flights. A bit of jet lag. One unrelenting vision of what could be possible.

She wasn’t going to let a little thing like a sticky patch of carpet get in her way.

The 21-year-old American gymnast soared to gold in the women’s floor exercise Monday night, her precise routine capping a roller coaster 24 hours in which she narrowly avoided serious injury during the vault finals when her right foot caught just as she was preparing her entry.

Carey’s score of 14.366 gave the U.S. women’s team its fifth medal of the games and assured that each of the six athletes who came to Tokyo — Carey, Simone Biles, Sunisa Lee, Jordan Chiles, Grace McCallum and MyKayla Skinner — will be checking some bling in customs when they return home.

Carey earned a spot in Tokyo by taking advantage of what turned out to be a one-time-only offer by the International Gymnastics Federation. The sport’s governing body made a provision for the 2020 Games that allowed athletes to lock up an individual nominative spot if they racked up enough points at World Cup events.

So the Careys spent 16 months flying to different continents, piling up podiums on vault and floor exercise along the way. They accepted the spot on the eve of the U.S. Olympic Trials.

Vanessa Ferrari of Italy earned silver, the 30-year-old’s first Olympic medal after near misses in Rio de Janeiro in 2016 and London in 2012. She capped a long comeback from a torn Achilles tendon four years ago.

Angelina Melnikova of the team representing the Russian Olympic Committee and Mai Murakami of Japan were awarded the bronze after finishing with identical scores. Their 14.166 included the same difficulty (5.9) and execution scores (8.266).

Meanwhile, Simone Biles, the 2016 Olympic gymnastics champion, will return to competition in the balance beam final on Tuesday, a little more than a week after stepping away from the meet to focus on her mental health.

Biles, 24, removed herself from the team final on July 27 after a shaky performance on vault during the first rotation. She watched from the sidelines as her three American teammates completed the meet without her; the U.S. took silver behind the team known as the Russian Olympic Committee.

The path to Valarie Allman’s gold medal — the first for the U.S. track and field team at Olympic Stadium — started with a plate of spaghetti.

That promise of pasta from her high school team was enough to lure her into the discus and to the point she reached on a rainy Monday night at the Tokyo Games: a gold medal for the United States.

Allman, 26, opened the final with a throw of 226 feet, 3 inches and then waited through an hour’s delay and around 50 throws by her competition. But nobody could pass her.

About that life-altering meal: As a teenager, she was a dancer who dabbled in different track disciplines. But she hadn’t found her true track calling. The throwers on her high school team in Longmont, Col., said she could partake in a pasta meal with them on one condition: She had to give throwing a try. That’s how the discus became her thing.

“Looking back, gosh darn, that was the best spaghetti dinner of my entire life,” said Allman, an All-American while at Stanford who now lives and trains in Austin, Texas.

Meanwhile, Sifan Hassan, an Ethiopian-born 28-year-old who competes for the Netherlands, scored two remarkable victories on the track. Her gold-medal run in the women’s 5,000 meters came a mere 11 hours after she picked herself up from a fall on the final lap of her 1,500-meter heat to not only finish that race — but win it, as well.

It’s a never-before-attempted Olympic journey that will require six races over eight days.

“To come back [11] hours after that, and to run the race,” said silver medalist Hellen Obiri of Kenya, “and you can see that she’s great.”

The 1,500-meter heat should have been a no-fuss warmup for Hassan’s main event later in the day. Running from the back, as is her preference, she was gearing up to make her move as the phalanx of 15 runners approached the start of the final lap.

But Kenya’s Edinah Jebitok stumbled to the ground just in front of her. Hassan tried to hurdle over her fallen opponent, but tripped and did half a barrel roll.

Within two seconds, she was up again. What came next was one of the most remarkable 60-second laps in racing, as Hassan moved from the back of the pack, picking off runner after runner. All she needed to advance was a top-six finish. She ended up taking first.

In the gold-medal race, Hassan started to surge with about 250 meters left. She won the race going away, in 14 minutes, 36.79 seconds.

Hassan was 1.57 seconds ahead of Obiri, and Ethiopia’s Gudaf Tsegay took bronze.

Earlier, the American favorite in the 100-meter hurdles, Keni Harrison, came in second to Jasmine Camacho-Quinn, who was born and raised in the United States but competes for her mother’s homeland, Puerto Rico.

The day’s other gold went to Morocco steeplechaser Soufiane el-Bakkali, whose victory ended 40 years of Kenyan dominance in the Olympics.

YOKOHAMA, Japan — Four of seven U.S. relievers combined to give up five runs as the United States blew a three-run lead in a 7-6 loss to Japan that pushed the Americans within a loss of Olympic elimination.

“We played a good game tonight,” U.S. manager Mike Scioscia said. “There were some things that got away from us on the mound.”

Japan overcame a short outing by Masahiro Tanaka. Yuki Yanagita tied it 6-6 with an RBI grounder in the ninth off Scott McGough and Fukuoka teammate Takuya Kai hit a winning single in the 10th that put the hosts in the semifinals.

The U.S. (2-1) fell into the losers’ bracket of the double-elimination second round. To reach this weekend’s final, it must prevail Wednesday when it plays the winner of Tuesday’s elimination game between the Dominican Republic (1-2) and Israel (1-3), and then again Thursday against the Japan-South Korea loser.

The next challenge for the U.S. in its quest to win a seventh consecutive Olympic gold medal is Australia as the Americans drew their rival in the quarterfinals of the women’s basketball tournament.

The Opals beat the U.S. in an exhibition last month in Las Vegas and will be the latest test for a U.S. team that has been challenged at the Tokyo Games unlike any other time during its gold medal run.

“Australia will be a formidable opponent because we know each other so well and we look forward to the challenge of getting out of the quarterfinals,”” said U.S. coach Dawn Staley, a former Virginia star.

Weightlifting: Li Wenwen took the gold medal in women’s over-87-kilogram weightlifting for China’s seventh victory in the sport at the Tokyo Games. Li was far ahead of her challengers as she lifted a total 320 — 140 in the snatch and 180 in the clean and jerk.

Emily Campbell became the first British woman to win an Olympic weightlifting medal with silver on 283 kilograms. Sarah Robles of the United States repeated her bronze from 2016 with 282.

The Color of Money: Check your redesigned Social Security statement. It makes it easier to see if you can afford to retire early.

If you're old enough and have worked long enough, you may recall getting an annual Social Security statement in the mail, about three months b…

The Color of Money: How to beat inflation and empty shelves this holiday shopping season

I’ve long had a strategy for holiday shopping. I purposefully wait until the last minute, hoping to score deep discounts as retailers desperat…

EXPLAINER: What we know and don't know on new COVID variant

MINNEAPOLIS — When a suburban Minneapolis police officer shot and killed Daunte Wright in April, her reaction on body-camera video seemed to i…

Jade Carey, of the United States, poses after winning the gold medal for the vault during the artistic gymnastics women’s apparatus final at the 2020 Summer Olympics, Monday, Aug. 2, 2021, in Tokyo, Japan. (AP Photo/Ashley Landis)

Jade Carey registered a score of 14.366 to win the floor exercise gold medal, the fifth medal of the Tokyo Olympics for the American women’s gymnastics team.