Goochland's Laura Lee Baldwin attacks for a point in the opening set of the Bulldogs' 3-1 win over Powhatan on August 24, 2021, at Goochland High School. 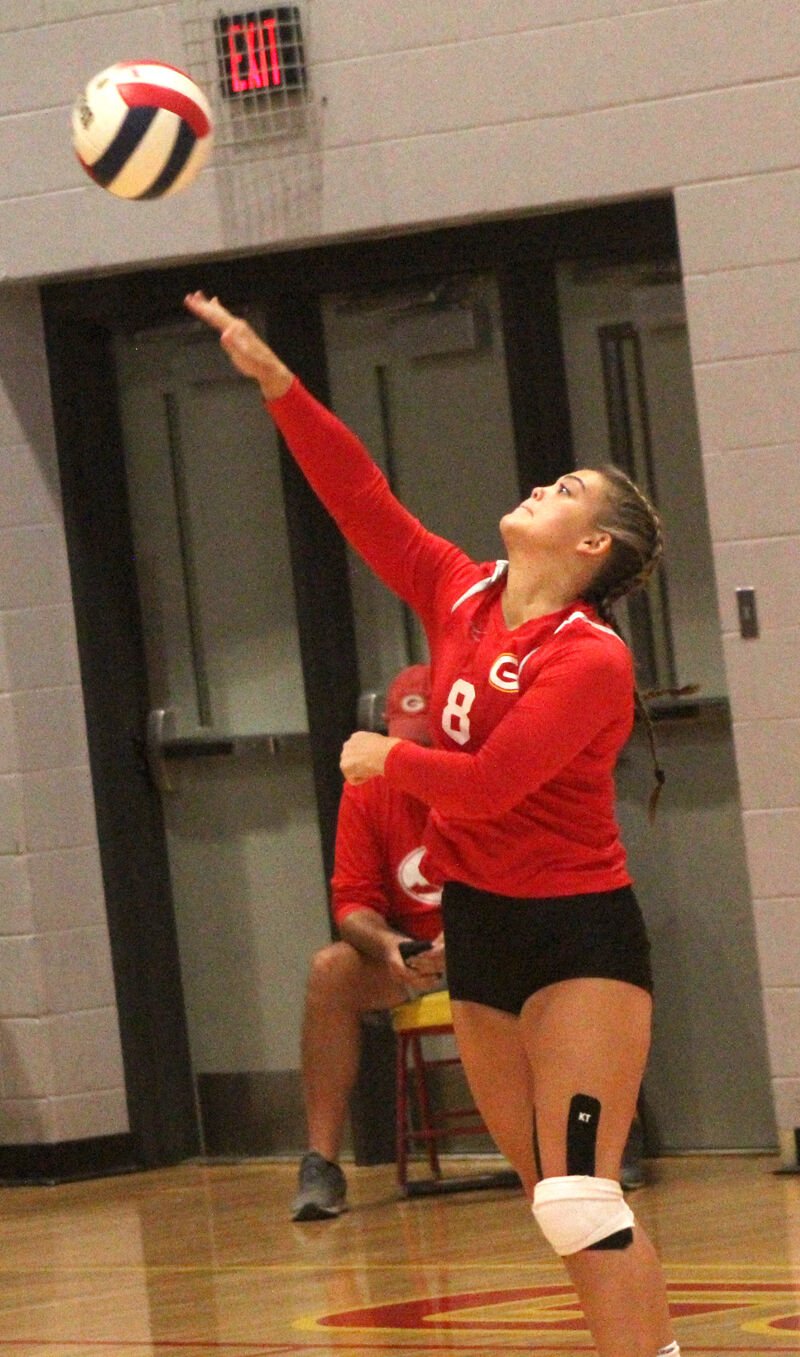 GOOCHLAND – For the second straight season, the match between the talented and depth-heavy teams of Powhatan and Goochland went to four sets.

For the second straight match, that fourth set went beyond the 25th regulation point.

And for the second straight match, the home team emerged victorious.

This time, however, it was the Bulldogs who erupted in celebration.

“That was really great – we had a tough fight against them last season,” Goochland head coach Rachel Jacobsen said, pointing to the fourth and final set between the two teams this spring, when Powhatan edged out the Bulldogs 32-30 for the 3-1 win.

Multiple times in the fourth set on Tuesday night, Powhatan appeared to be en route to tying the match and forcing a fifth tiebreaker set as it built up huge leads in the early and middle portions of the stanza.

Senior Emilie McDaniels mixed in multiple aces as she served for 7 straight points to help the Indians lead 9-1. From Goochland, Nova Wonderling’s attack, an ace from utility player Nicole Brown and a block from middle hitter Laura Lee Baldwin helped the Bulldogs slash Powhatan’s lead down to 11-10.

Powhatan Libero Kendal McMullin’s ace, which brushed the top of the netting, combined with a well-spotted kill by Olivia Moss and a block from senior Faith Henderson to help Powhatan pull away again and lead 20-13, but Goochland's Layla Ford delivered one of her own well-spotted kills, Wonderling rocked a corner kill and their teammate Audrey Dolan challenged the opposing team with her linear serve as the Bulldogs pared down the visitors’ advantage to 20-18.

Strong blocking featuring Henderson, McDaniels and Carly Rehme on coverage at the net helped put Powhatan in a set-point position as it held a 24-20 lead. But then Dolan arguably made the play of the game when, on the second touch of a difficult ball with Powhatan on set point, she kept the play alive on a diving save, and the rally led to Powhatan hitting the ball into the net.

“Audrey honestly is one of our most aggressive players,” Jacobsen said. “She’s great to have back there. She’s everywhere – she talks, she moves, she’s just excited to be on the court. We’re really lucky to have her.”

Brown then served for 4 straight points as Bulldogs grabbed a 25-24 lead and forced a situation in which the first team to a 2-point lead secured the set. Powhatan kept pace, but Wonderling’s fiery swing twice lifted Goochland back into a 1-point lead.

With the Bulldogs ahead 27-26, one of their lead attackers, Nina Smith, had the Bulldogs' final touch on the ball as the Indians, on the dig attempt, returned her attack low and below the net to seal up the match point for Goochland.

Wonderling challenged Powhatan with her powerful swing and was able to force her opponents to hit away several lasers over the course of the match.

“From the sideline, whenever I’m seeing a good set, I’m just sitting there, like, ‘Hammer it! Hammer it! Hammer it!’ Just waiting for it,” Jacobsen said with a chuckle. “But she attacks the ball every time. She’s real aggressive. She brings a really great presence to the court. We’re lucky to have her.”

The middle attack and serve paved the way for the home team to head into the fourth set with a 2-1 lead over Powhatan. Key blocks and a strong final serving stretch from Layla Ford factored into Goochland’s rally out of a 19-14 deficit to overtake Powhatan 25-23 in the opening set. Laura Lee Baldwin put away the first set point on her attack up the middle. Ford also earned a set point when she rocketed a powerful shot off of a defender to secure the third stanza for Goochland at 25-19.

“Layla, she came in clutch; she was just going for it,” Jacobsen said, adding of Baldwin: “She had a lot of blocks, she was getting good swings and she was all over the place. She’s one who we actually brought up last year, so it’s nice to be able to have her actually have a full season this year.”

Goochland Libero Blair Bussells led the way in absorbing Powhatan’s strong attack, being able to extend and hone in on several big shots throughout the night.

“She’s our leader in defense,” Jacobsen said of Bussells. “She makes the choices and I support her wherever she decides people need to go.”

For Powhatan, Rehme’s power shined as she dished out a team-leading 10 kills. She also served for 5 straight points after the Indians broke an 18-all tie to put her team in a position to secure the second set 25-20 over Powhatan. McDaniels had 6 service aces and Rehme had 5.

Chesed Russell was able to get the Bulldogs off-balance at times in the match with her dinks and light attacks up the middle. Russell tallied up 8 kills on the night.

Henderson and Rehme each had 3 blocks, and Henderson added 6 kills. Powhatan setters Sydney Wade and Moss led the team in assists with 16 and 13, respectively.

Depth was incredible on the court from end to end. Both Powhatan and Goochland were led by players who could make a key play of any kind at any time. For Powhatan, both Henderson and Rehme could defend as well as they could attack with power. Moss could set as easily as she could skip the ball off her opponents’ hands either in or near shallow court. McMullin dug, set and even sent the ball over several times on the third hit to keep rallies alive.

Goochland was running a 5-1 for a while, and then Jacobsen had Marina Stratiou set, with Ford switching to receiving Powhatan’s attacks late in the stretch. Brown, who was setting for much of the match, bolstered the Bulldogs’ successful comeback bid with her attack in the fourth set. In addition to her booming attack, Wonderling also showed she could keep in play the balls that were inches away from the ground with her clutch dive.

“They’re all sort of doing everything and they’re all filling in where they need to and taking it all in stride,” Jacobsen said. “They’re doing a really good job.”

Both teams have huge out-of-district matches coming up on Thursday. Goochland will host Maggie Walker Governor’s School at 7 p.m., and Powhatan will play its home opener versus Patrick Henry at 7 p.m.

Truex goes from second, to last, then first in Cup Series win

RICHMOND – After a hot start to the season that saw him win three of the NASCAR Cup Series’ first 12 races in the 2021 regular season, Martin …

Back in the day, summer meant it was time to kick off your shoes

Like most Richmonders, last week’s thunderstorms were a welcomed relief for the intense heat of the past few days. Unfortunately, I got stuck …

Can someone please explain why the hair begins to stand up on my back at around 7 p.m. on fall Fridays. Around that time, I get the that disti…

Goochland's Laura Lee Baldwin attacks for a point in the opening set of the Bulldogs' 3-1 win over Powhatan on August 24, 2021, at Goochland High School.